The area known as Rattling Creek is located in Weiser State Forest, about an hour north of Harrisburg, Pennsylvania. I had heard great things about the mountain biking there, but never had the opportunity to check it out, despite the fact that it’s only a couple hours from home. Last weekend, I had a rare Saturday off, so I decided to make the drive and meet up with some friends to enjoy a day exploring new trails. 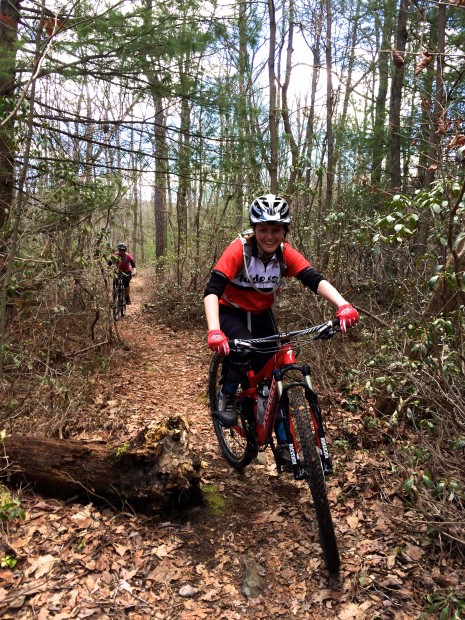 It was a really cool ride–mostly rocky, flowing singletrack punctuated by the occasional gravel road to link trails together. It was a gorgeous day too–one of the first really warm ones this spring, with no shortage of sunshine. We pulled into the lot on Powells Valley Road around noon, greeting friends and bike buddies we hadn’t seen in a while with a round of hugs and excited grins.

The ride began on Hop Back Trail, a rolling, slight-uphill without too much techy stuff–a good intro and warm-up, especially for those among us who had been off their bikes all winter. We jumped on a gravel road briefly at the end of the mile-long trail, then branched off onto singletrack once again on Fawn Kill. This section of trail was a bit more technical, featuring quite a few fun log-overs and rock gardens, with more challenging alt-lines in places. 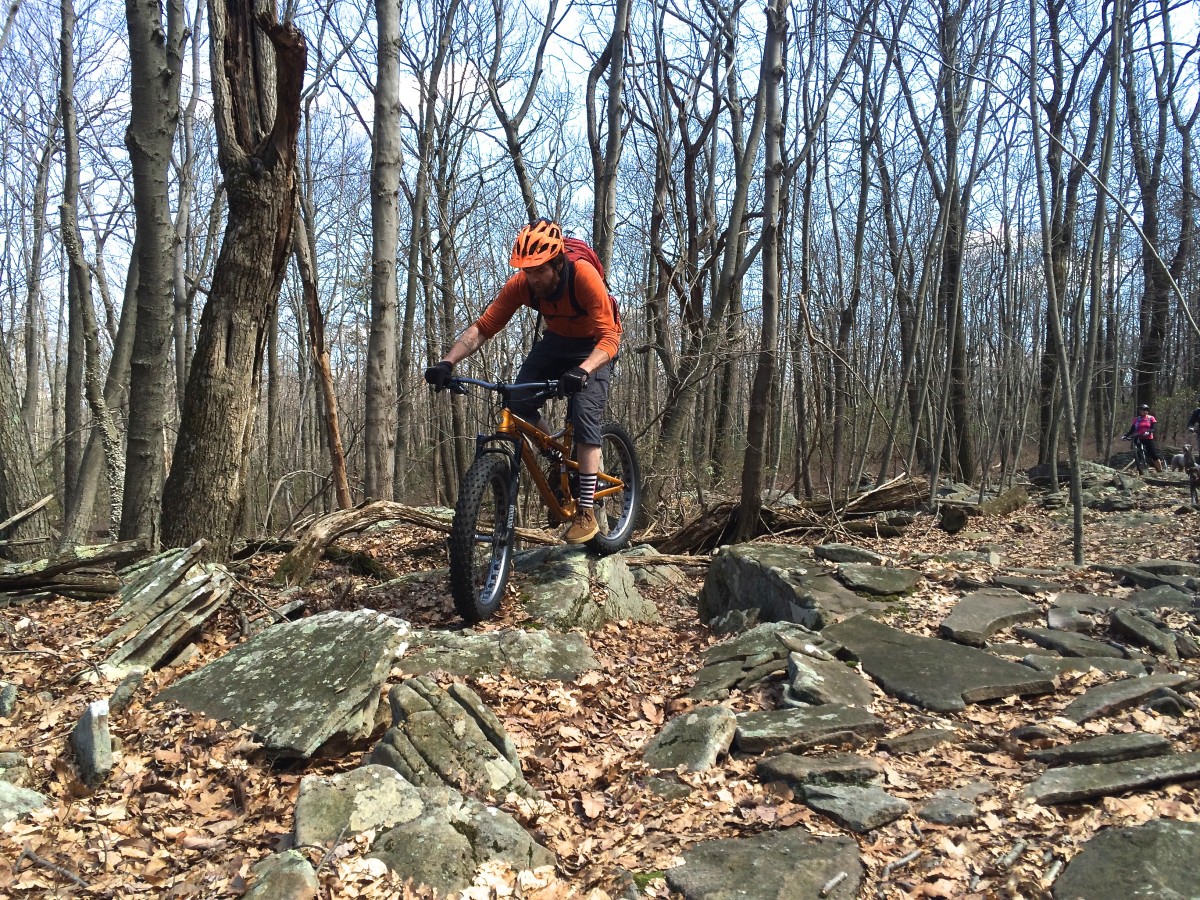 During the entire first half of the ride, we were gaining elevation towards the top of the mountain, but most of the time we barely noticed. With the exception of a few steep but short climbs, the majority of the trails were rolling. Preserve Line, Shale Gap, Luke’s, and Wolf Pond Trails all took us closer and closer to the top of the ridge, where there is a hang glider launch and an amazing view of the rural Pennsylvania landscape. It’s definitely worth the slight detour and extra few minutes to stop and check it out. 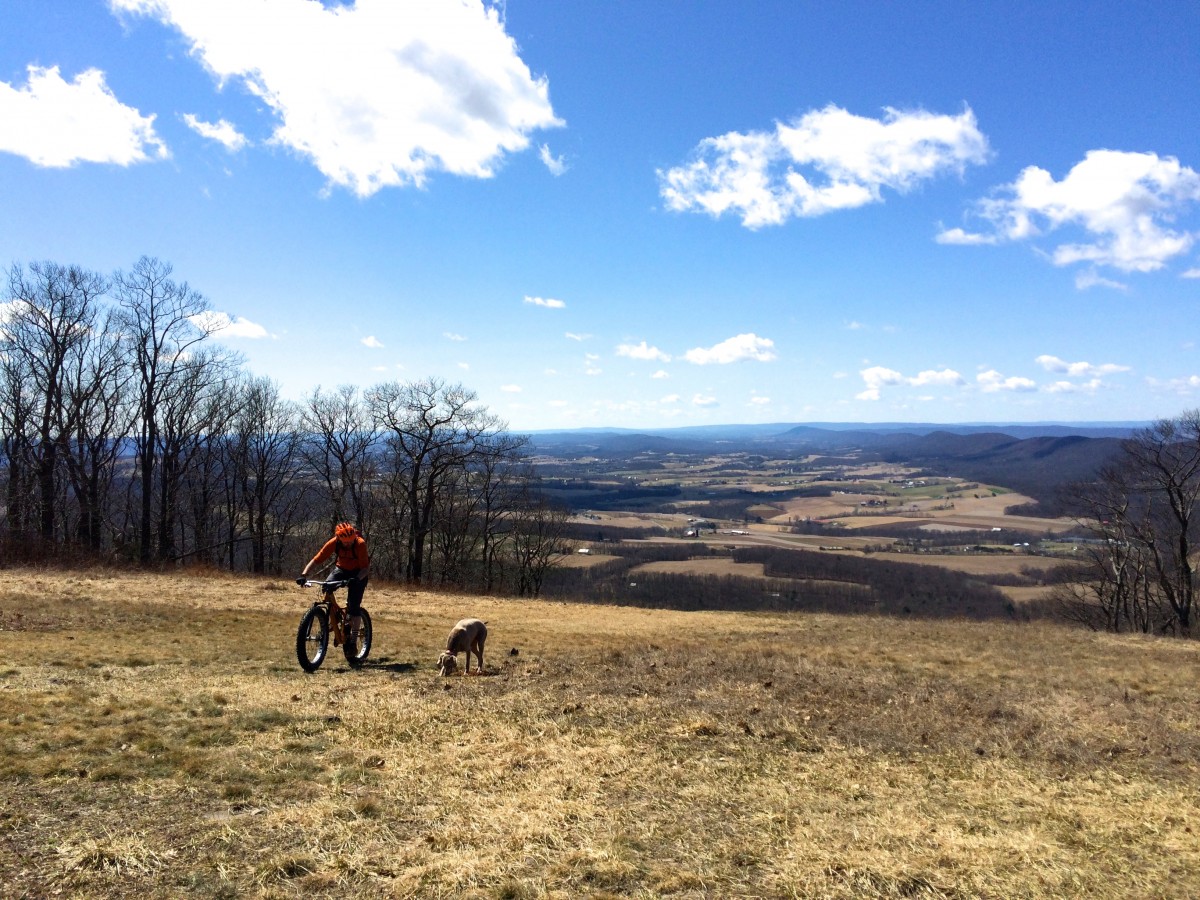 If the first half of the ride took us to the top of the ridge, that would mean the second half would take us back down… but not before traversing the ridge top on Rock’s Ridge Trail for a while. This trail is aptly-named, boasting large boulders and rock features. I conquered some of my fears and attempted (successfully) a line on one of the built-up rock features that I didn’t think I’d be able to get. After I had done it, I was so happy and had so much fun that I needed to go back for another turn. 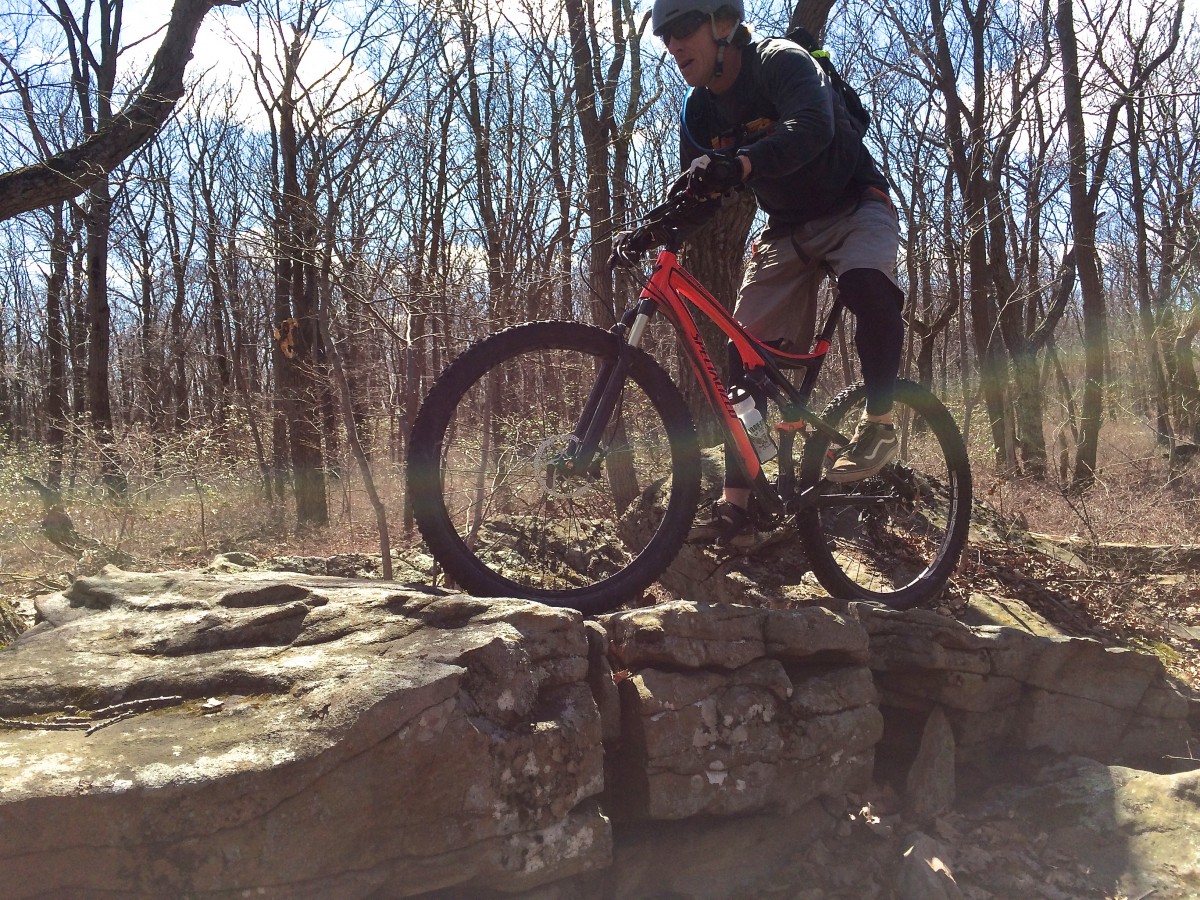 Rattling Creek Trail, for which the area is named, and one of the longer trails in the system, was about 4 miles of gradual downhill. We all spread out throughout the course of the descent, and for the longest time I didn’t see anyone, to the point where I began to question if I had made a wrong turn at some point. The forest was quiet, peaceful, with the sun shining through the still-bare tree branches of early spring, last year’s leaves crunching under my tires. Eventually, I saw those who had been in front of me up ahead, and we all stopped to regroup for the home stretch. The Doc Smith Trail was a good alternative to taking the road back to the parking lot, and then it was off to the local watering hole for a beer and burger before a sleepy drive back home with the setting sun. 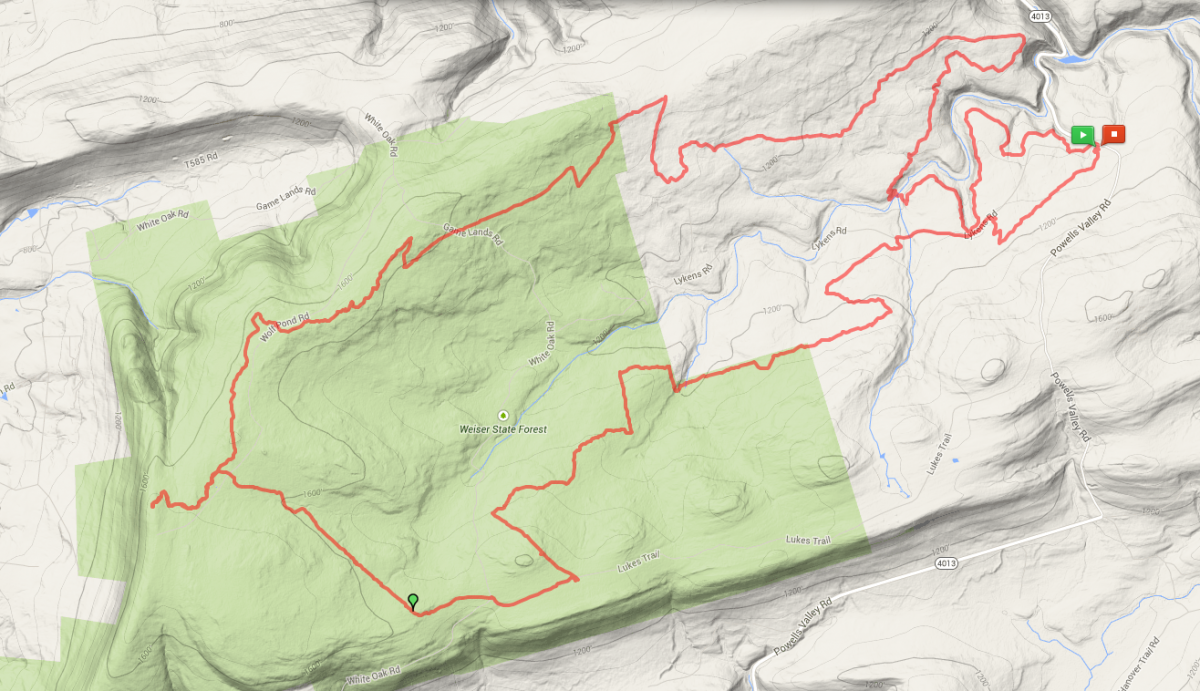 Rattling Creek is also home to the Rattlin’ Off-Road Weekend, which takes place in mid-April and features a 20-mile and 40-mile race on Saturday and enduro race on Sunday. There is camping available in the state forest, so it’s easy to make a weekend of it and explore some of the other trails and gravel roads that aren’t included in the IMPA Epic loop. This is definitely a trail system to check out if you’re in the area.

Gear
The Maxxis Minion DHF Tire is Still the One to...
Gear
Never Underestimate the Power of a Good Zip-tie
Gear
These MTB Deals are Fire, including 40% off Patagonia Dirt...
Progression
Sizing Up or Down Plus Handlebar Widths and Crankarm Lengths:...
Subscribe
Login
Please login to comment
1 Comment
Most Voted
Newest Oldest
Inline Feedbacks
View all comments

You forgot to ride the trails on the other side of the road. Guess you’ll need to go back. Huge kudos need to go to some guys no one has ever heard of, Keith Whitcomb, Mike Mace and some tough as nails old timer named Rock Martin. There’s plenty others I could name, but these trails were good before “mountain biking” wankers started whining for tax dollars and mech built flow. And they were good because of a handful of seriously committed people. Glad you enjoyed the ride, hope you raised a glass to those who made it possible.