When you roll into the town of Downieville, California you can just feel it in the air: you have arrived at a true mountain bike destination.

“Destination” is definitely the operative term. Located over an hour up into the mountains on winding two-lane highways from the closest interstate, Downieville isn’t a town that you pass through on the way to somewhere else. If you drive into Downieville, you’re there for a purpose! 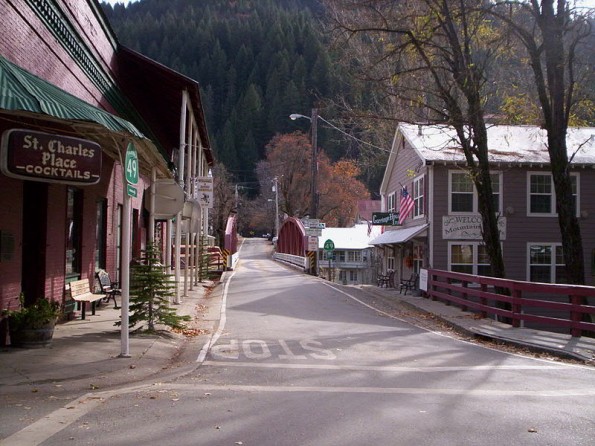 The “major” highway in the region as it passes through downtown Downieville, one-lane bridge and all. Photo courtesy of the Wikimedia Commons.

This historic mining town, located in the bottom of a mountain canyon on the banks of the North Yuba River, was once in the running for the capital of California with a population of close to 5,000 people. Sacramento was named the capital, however, and after the gold ran out almost everyone left town for good. As of the 2010 census, the population is 282.

Nowadays the locals mine the sweet singletrack in the Sierra Mountains like modern day veins of gold (though you can still see signs for actual gold claims along the river). Home of the long standing Downieville Classic and mountain bike festival, there is actually much, much more to the riding in Downieville than just the basic race route. 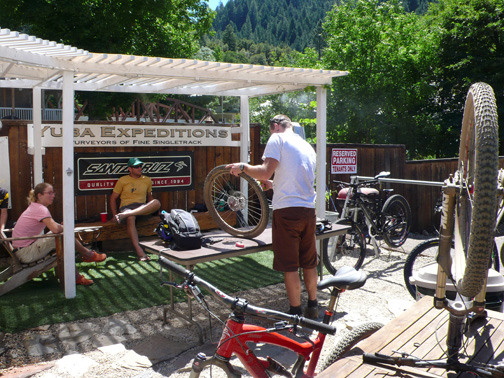 Looking at the trail map at Yuba Expeditions, the local bike shop and the center for all things mountain bike in Downieville,I was astounded by the expansive network of singletrack spread over the entire region. There are hundreds of miles of interconnected trails all spread across the mountain ranges, and we probably only have a fraction of these currently listed on Singletracks. (If you have some info on Downieville-area singletrack that we don’t have, please be sure to add it!)

Yuba Expeditions, “purveyors of fine Sierra singletrack,” is an interesting establishment. It is a non-profit bike shop… yeah, you never thought you’d hear of such a thing, did you? After they pay the bills and the employee wages, all of the money that Yuba Expeditions makes goes right back into maintaining and expanding the trail system. While their approach seems very unconventional, the business model seems to be working out for them. They handle everything mountain bike-related in Downieville from running frequent shuttles to trailheads all throughout the region, bike rentals, repairs, retail sales, and more. Located in the heart of town right next to the local visitors center, it’s impossible to visit Downieville and miss the shop (especially with the swarms of mountain bikers buzzing around the town square).

After looking at the trail map in the shop, I knew there was no way I was going to be able to put a dent in mapping that trail system for Singletracks. Instead, I decided to stick to my original plan to shred the classic Downieville Downhill route, vowing to return to Downieville again for a much longer stay.

I talked my beautiful wife into driving me up to the top of Packer Saddle and dropping me off, since the shuttles were all booked up for the day (Saturday). Fortunately the Pacific Crest trail crosses the ridgeline right there so she could head out for a hike while I rode.

While there are a couple of different routes down from Packer Saddle, I decided to stick to the most famous route: Sunrise, Butcher Ranch, Third Divide, Upper First Divide, and Lower First Divide. 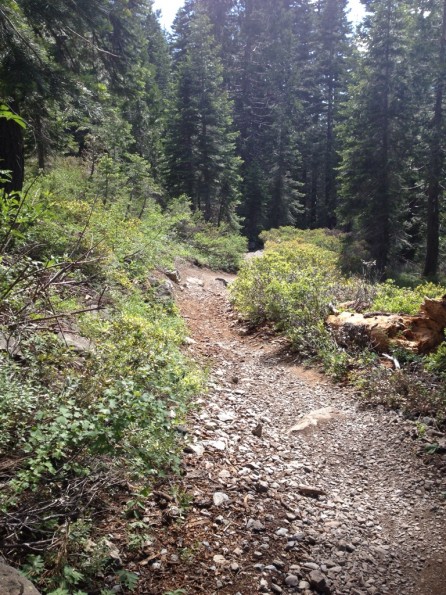 I dove eagerly into the singletrack on the Sunrise trail. With a short little climb from the saddle, the hillside quickly dropped downward, yielding a ripping singletrack descent with grippy dirt and swooping, bike-friendly turns! 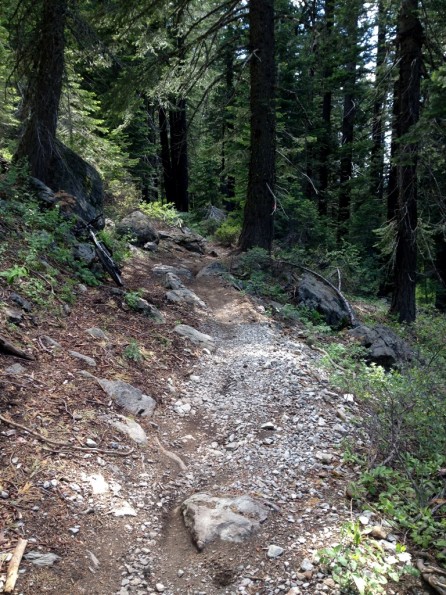 After just a few miles the trail dropped into Butcher Ranch, a multi-use trail that is mostly singletrack and is shared with motos. Thanks to the horsepower and the weight of the dirt bikes and how they wear on a trail, Butcher Ranch was a brutally-technical descent in spots–and I loved it! While Porcupine Rim had been a delightfully technical descent just a few days before, Butcher Ranch was rocky and drop-laden and still pretty narrow, forcing riders to commit to some pretty sketch moves! 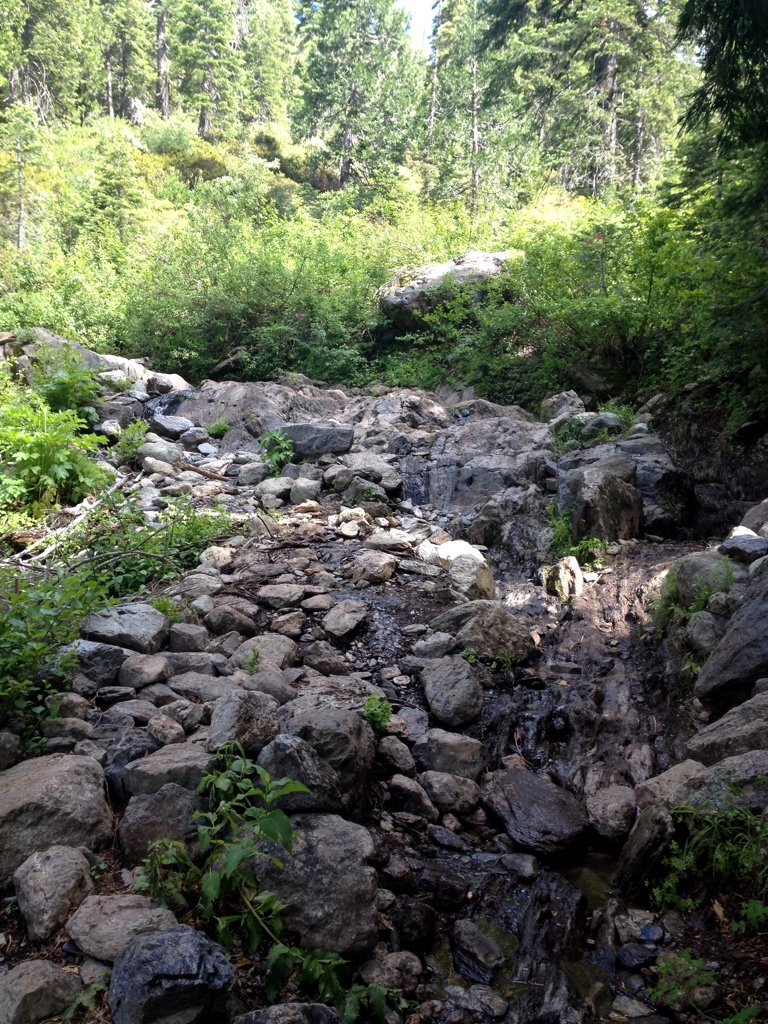 After finishing up with the rocky goodness of Butcher Ranch and continuing back onto a bike-only trail, the singletrack gets much narrower and, overall, much smoother. The beautiful bench cut trails boast some really long straightaways and flowing corners, which really allowed me to open it up and blast down the mountain with all pistons firing!

According to Strava, my top speed was a whopping 37.9 miles per hour! Usually when I set speeds close to (or exceeding) 40 mph while on dirt, it’s on gravel roads. While there are one or two short sections of gravel road in the Downieville Downhill route, much of that climbs gradually. I’m not sure if there was some glitch in my GPS track which caused that 37.9 mile-an-hour speed reading, but I do know that at several points I was flying at crap-yourself-fast speeds down the mountain! 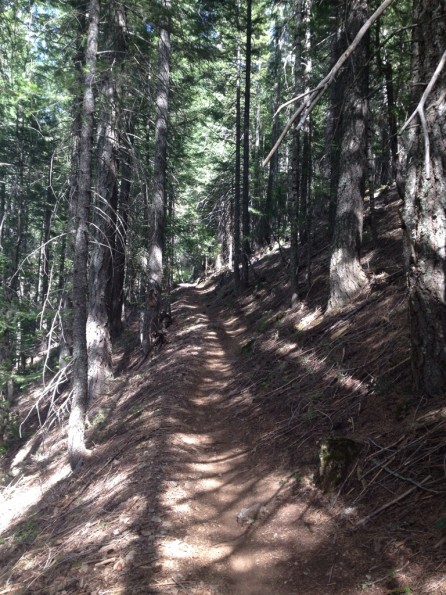 While much of the trail is smoother lower down, don’t think the rocks are completely done–there are a few sections that will still keep you on your toes. 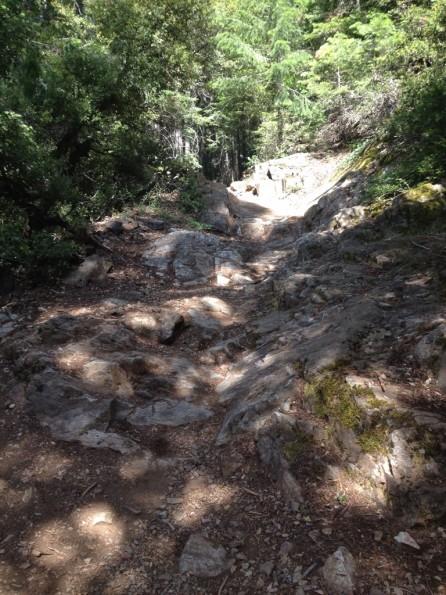 Looking back up a rocky section.

Despite the fact that the Downieville Downhill drops over 5,000 vertical feet in about 15 miles, there’s still plenty of climbing to be done–about 1,300 feet of it, in fact. At the beginning of one of the divide trails, shortly after crossing one of the first bridges, there’s a pretty serious climb heading up the side of the ridge. 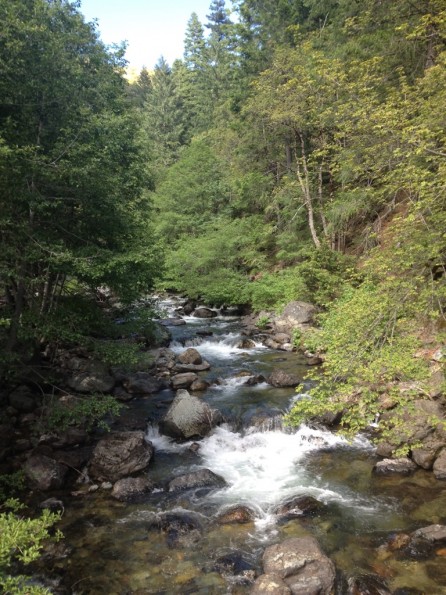 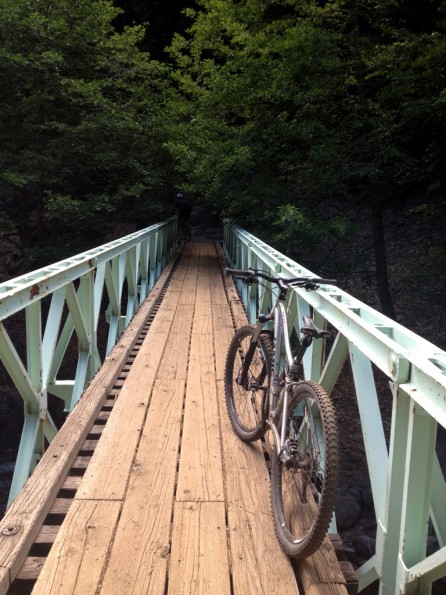 Despite breaking my upper seat tube while riding The Whole Enchilada, I decided to ride the Jamis Dakar 650b anyways. I knew I wouldn’t be able to sit down and climb, but based on what I’d heard about the route, I figured I wouldn’t need to sit down much anyway. But during the few times that the trail did tilt upward, climbing out of the saddle the entire time was pretty painful!

As the trail continues to descend and turns into Upper First Divide and Lower First Divide, the singletrack hugs an exposed ridgeline high above Lavezzola Creek, offering opportunities for great photos–or a painful tumble down the mountain. 😉 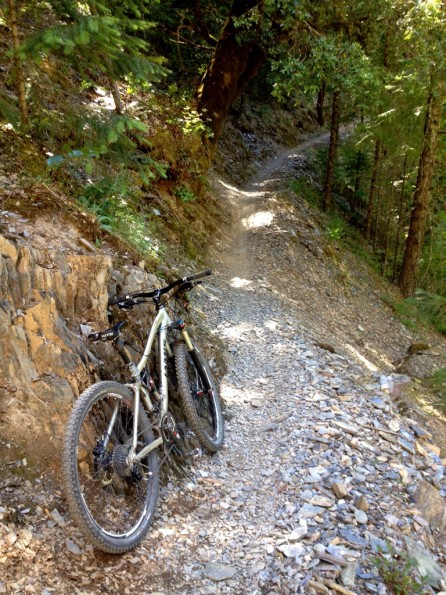 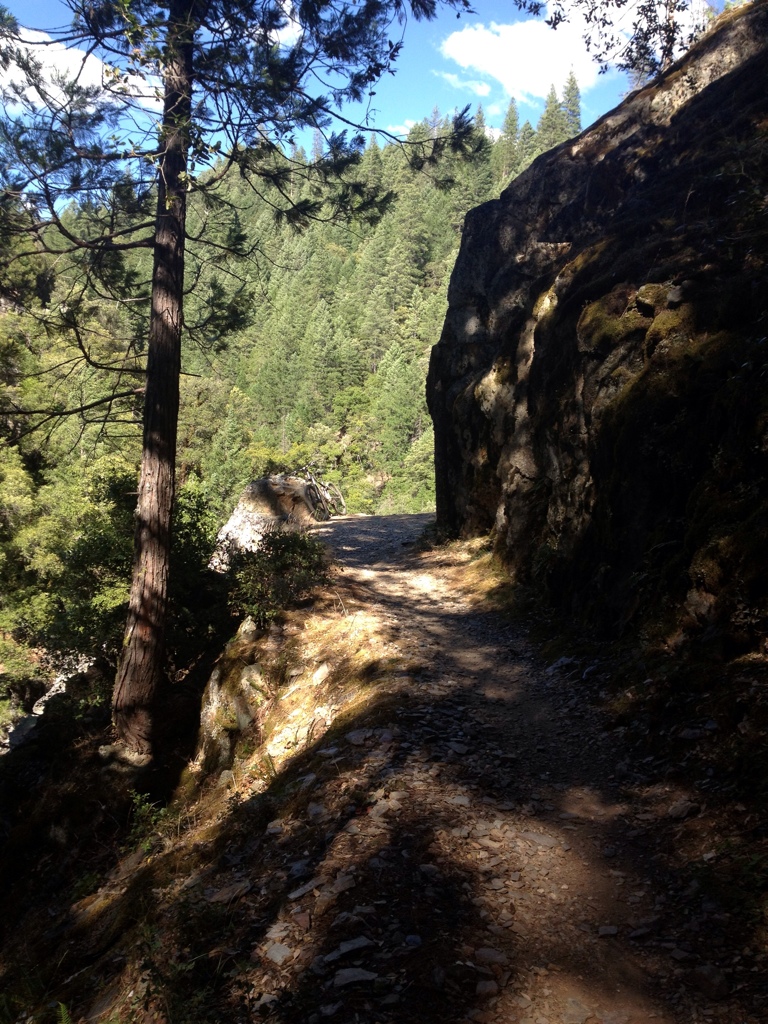 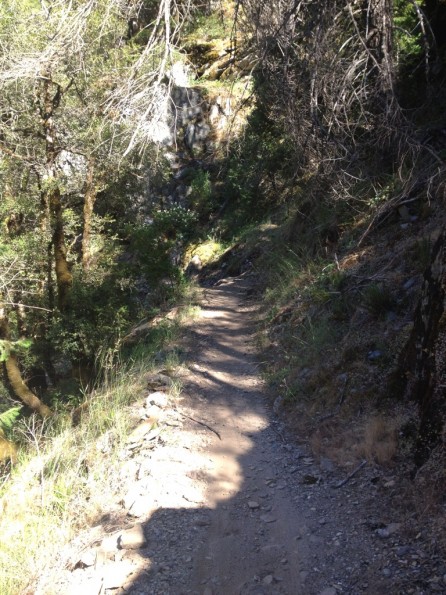 Finally, after 15 miles of blissful descending, the trail drops you back out onto the pavement with an easy coast back into the town of Downieville, right to your waiting car or one of the tasty local restaurants!

It’s already been several weeks since I rode Downieville, and as our trip comes to a close, the first question everyone asks me is: “What is the best trail that you’ve ridden?” After looking back on all of the places we’ve visited so far, I keep coming back to two rides: The Whole Enchilada and the Downieville Downhill.

While The Whole Enchilada is easily the most epic ride that I’ve done so far on this trip, Downieville might be the most fun. The singletrack was just absolutely ripping, and at only 15 miles long the 5,000 feet of elevation loss equates to a steeper, faster descent overall than The Whole Enchilada.

Great report! For some reason I always imagined the classic Downieville route as a dusty, exposed, and eroded descent but clearly it’s none of those! Wishlisted.

Man, that is some sweet looking trail! Nice pics!

I thought you got the Dakar frame replaced by Jamis?

I had much the same experience — except for the 37.9 mph part — glad I wasn’t trying to keep up with you; I didn’t see any flat spots big enough to land a Flight for Life helicoptor!

awesome greg! guess i know where you’ll be taking your next vacation 😉 bring an extra pair of shorts next time, im sure you might have exceeded “crap-yourself-fast” speed if you weren’t on a broken bike! glad you had fun, and i assume your wife’s hike must have been good too!

Counting down the days…

@jeff, I thought so too, but onanistic sections of trail, especially sunrise, recent trail maintenance and reroutes were very evident. And the trees–the sierras have some gorgeous forests!!

@maddslacker, thanks! They did send me a new frame, but this was before that… I’m just really behind on my blog posts 🙂

@skibum, yeah not sure how accurate that one reading was, but I definitely spent a lot of time in the high 20s!

@mudhunny, haha will do! Yeah she hiked to the Sierra buttes , this really prominent rock formation that you can see from the highway down below, and said it was awesome!

@mtbikerchick, you hitting up downieville too? If so, that’s good because, as you can see, it is rocking!!

Ridden this route once and it’s huge fun and highly scenic. Sweet to be able to pull off the trail and take a swim in many spots. Only trail that I’ve ever ridden that’s more fun is Gooseberry Mesa which are completely different type of trails.

I did the The whole Enchilada and that was really fantastic. If this is just as good I definitely need to go there 🙂

I think 38mph isn’t out of the question for Third Divide – you can really let it rip through there.

Big Boulder Trail adds a bit of climbing to the overall downhill experience and also some of the prettiest, deep, dark wooded singletrack you’ll ever lay eyes on. This followed by the fastest, flowiest sections of the standard downhill route.

Great Ride report Greg. Downieville and The Whole Enchilada are on my bucket list. 401, Crested Butte, ……….. I need a bigger bucket.:)

Great report! I am convinced I need to visit this place, soon. I sent my buddies a link to start planning a trip. Thanks!

@CraigCreekRider
I couldn’t agree more! All these ride reports add more and more trails to the bucket.

Ironically enough, while this trip has allowed me to tick a bunch of trails off of my bucket list, I think overall it’s just grown with the number of trails that I HAVEN’T had time to ride. Funny how that happens! 😀