The main point of our month-long road trip during the summer of 2013, and the pitch that helped me win the Sylvansport GO camper, was that my wife and I would be traveling the nation to find a new place to live. However, by the time our road trip actually came around, we had pretty much already made our decision: Salida. For those who are interested, here are 10 great reasons to move… er, I mean not move, to Salida.

Still, we wanted to check out Bend, and after our experiences there we could totally see ourselves living in Bend. However, there were some downsides to Bend, the long distance from our families being the primary one. Still, if for some reason Salida wouldn’t work out, Bend would be a fantastic second choice.

Consequently, we made our way down from Oregon and over to the beautiful, majestic state of Colorado to hunt for a place to live in Salida.

While I had ridden some fantastic trails in Oregon and we had seen some beautiful mountains, nothing I had ridden or we had driven past/through could hold a candle to the beauty and the majesty of the massive mountains outside of Salida, Colorado. Yeah, we thought we were in the mountains in Oregon… but as we climbed up and over Monarch Pass, topping out at 11,139 feet (with 14,000-foot peaks towering over us), it was clear: while Oregon is awesome, and I definitely want to go back, it ain’t got nuthin’ on Colorado.

We setup camp at O’Haver Lake which is nestled up in the mountains next to an alpine lake at 9,000 feet and not too far from town. The views of the mountains were fantastic–it was pretty easily the coolest campground we stayed at all summer, both figuratively and literally. 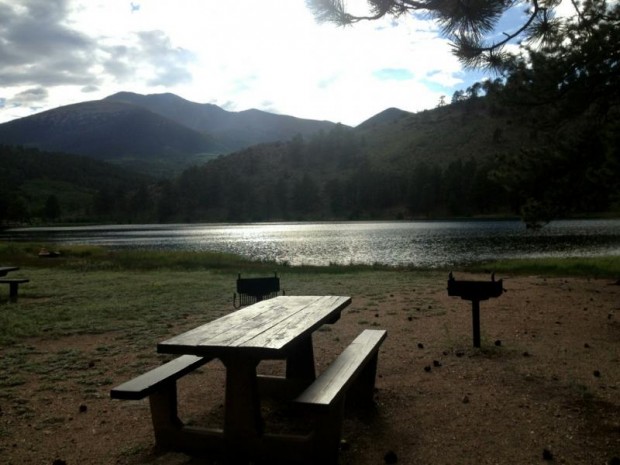 I didn’t get to spend much time riding that week, which was a little frustrating, but I knew that putting in the time to find a place to live in Colorado would pay off great dividends in the future… yeah, I’m a smartie. Still, I just had to get away and spend a morning riding the Monarch Crest.

I first rode the Monarch Crest back in 2008, and while we had been through Salida several times since then, I hadn’t had a chance to ride the crest again. That first ride, back in 2008, was hellaciously daunting, yet fantastically memorable. Thanks to a wrong turn, getting caught in a rain storm without a jacket, destroying my chain and cassette, and being forced to bail off the route early, it was quite the experience, to say the least.

After a five-year absence, I finally returned.

I cajoled my lovely wife into driving up to the top of Monarch Pass so I could experience one of my soon-to-be home trails. If you’ve spent any time on our trail rankings page, you’ll know that Monarch Crest is always near the top (currently sitting in spot #3). Yeah, that’s not a bad trail to have for your home trail…

Still, it had been five years since I’d last ridden the Crest, and in those five years I had ridden hundreds of trails all around the nation, including many of the nation’s best. After so many great singletrack experiences, I wondered if the Crest would be as good as I remembered it, or if I was remembering it through rose-colored lenses.

I began my climb from the top of the pass, traversing through the high alpine pine forest for a few miles before finally emerging above tree line. What sets the Crest apart, at least in my book, are the massive stretches of above-tree line alpine tundra that the trail traverses. Only rideable (without a fat bike) for a few months of the year, the window is small, but the reward is great! 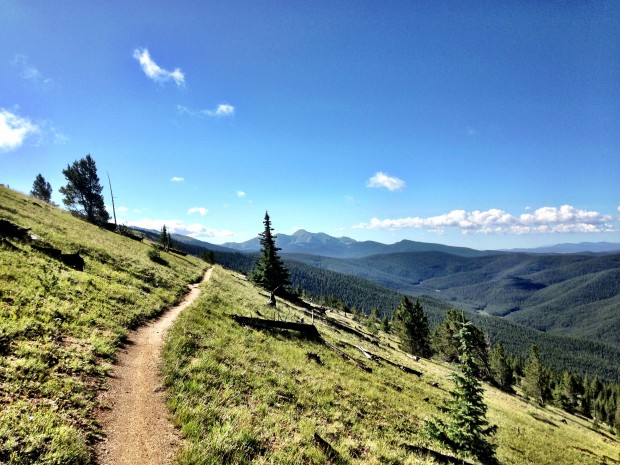 I’ll let some of these photos speak for themselves: 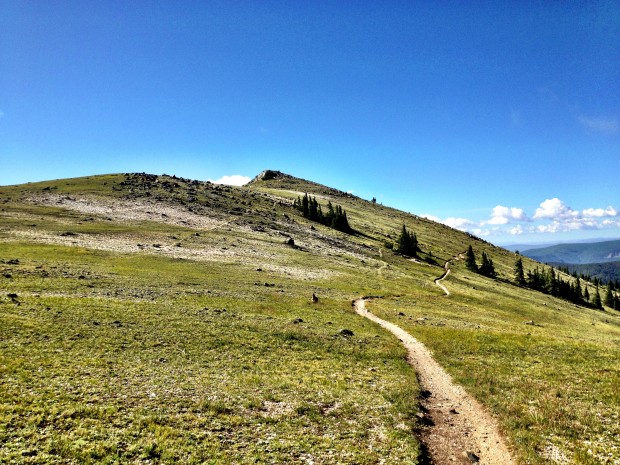 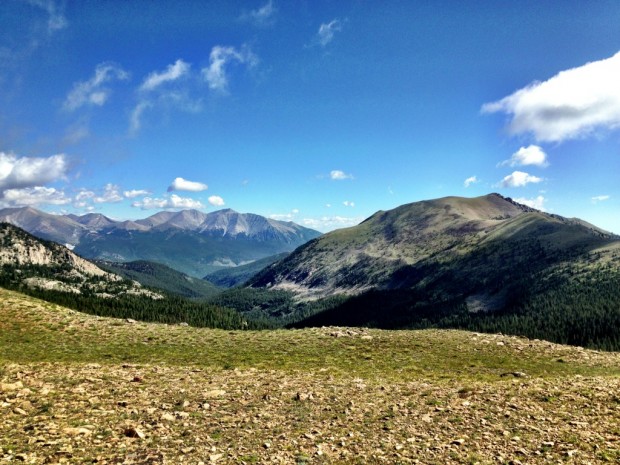 The last time I rode the crest I was astride my ’07 Jamis Dakar 26er. This ride, aboard the burly Diamondback Sortie 29er trail bike, was an entirely different story. Sure, my Jamis did great, but the Crest trail and the descents off of it are perfect for riding wagon wheels: wide open, relatively straight, with plenty of rocks and nastiness to roll over and through. If you come to ride the Crest, I highly recommend big wheels and plenty of suspension for maximum fun.

Or, barring that, “just ride what you brung!” 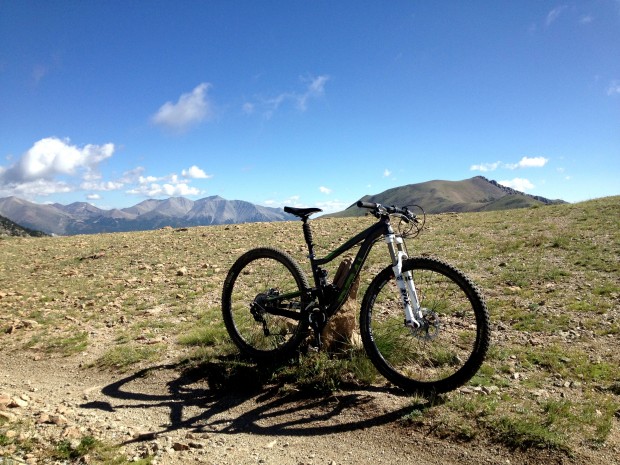 Judging from the massive Monarch Crest photo album here on Singletracks, most people–myself included–seem to take pictures of the smooth, flowing, high-alpine singletrack with hundred-mile views when riding the Monarch Crest… and perhaps rightly so, as those are some of the most photogenic areas. However, don’t be fooled into thinking the Crest is a dirt sidewalk that just happens to sit at 12,000 feet above sea level on the Continental Divide. Au contraire, my friends! The Crest itself features plenty of very rocky, high-speed descents that challenged even this 5-inch-travel full suspension 29er I was riding.

But the going really gets rough when it’s time to drop off of the Crest. There are about a half a dozen descents off the top of the ridge, but for this ride I decided to follow the classic Silver Creek route. Despite being the most popular route, this descent is far from easy, and features tons of chundery rock gardens, ledge drops, sections of uber-steep trail coupled with sharp switchbacks, exposure… just about everything one could want in a downhill bomb with some of the most beautiful scenery in the nation!

In 2008, right where I transitioned from the Silver Creek Trail to the Rainbow Trail, my chain sucked between the cassette and my wheel spokes, destroying both chain and cassette. Consequently, I was forced to bail out down the gravel road. In 2013, I had no such issues, and continued on to check out the 10-mile section of the Rainbow Trail that I had missed before.

This section of the Rainbow Trail definitely adds a good bit of overall climbing to the route, but the beautiful singletrack and fantastic views, even from this relatively-low elevation, were well-worth the additional effort.

Again, I’ll let the photos speak for themselves, but just note: I, again, got too focused on blasting through the rock gardens to take photos of them, and only really stopped on the smooth, picturesque sections: 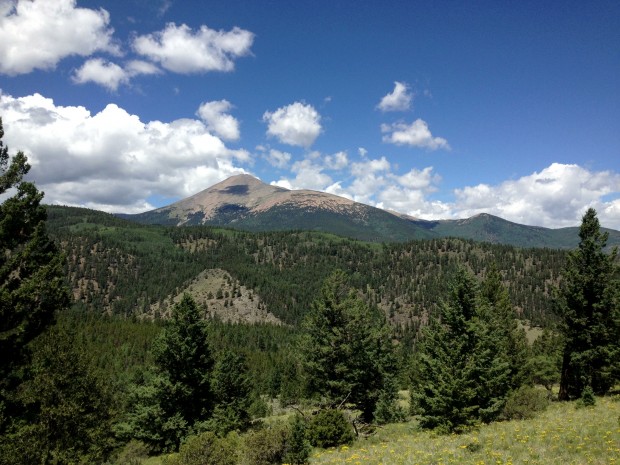 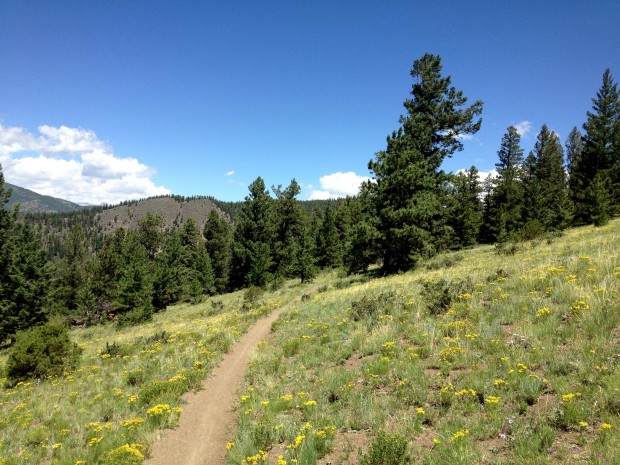 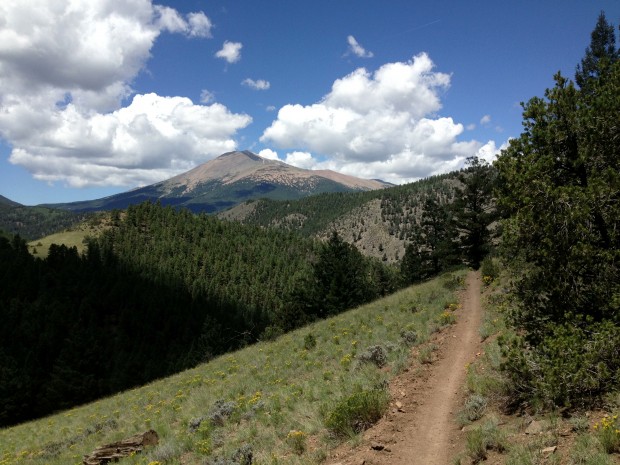 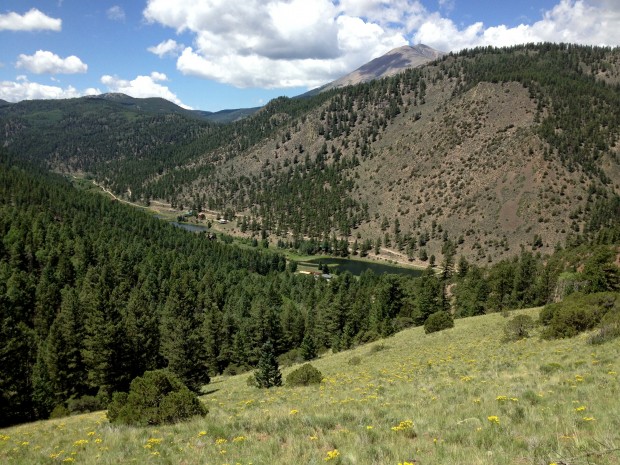 After five more years of mountain bike experience on some of the best trails in the country, I was afraid that my memories of the Crest would have overhyped it. So often we remember things better than they actually were, and when we go back to experience something again, the actual experience pales in comparison to our memories.

After riding the Crest again, I was shocked to realize that my memory had let me down! I actually hadn’t remember the Crest as good as it actually was! Riding it a second time, having had so many other great mountain bike experiences, I realized what a true gem this ride is.

There are few trails in the nation with views this expansive, descents this long, and rock gardens this challenging. This ride is the real deal, and offers up most everything you could want in an epic mountain bike ride! The Monarch Crest’s place near, or maybe more rightly at, the top of our “Best trails in the world” list is well-deserved!

Your Turn: Have you ridden the Monarch Crest Before? What did you think?

I have ridden this once, and it was awesome. I went with a friend visiting from Florida, so it took all day. I’d like to ride it faster, because I remember being so tired in the saddle by the end. I also remember thinking that this trail is the benchmark for the word “epic”. I ran out of water on this trail, despite taking ample amounts, and was extremely dehydrated by the time I got to Rainbow Trail. There was ample mountain streams, but I just avoided them because I had no way to purify them…now I won’t do a trail like that w/o a Steripen or chlorine tablets.

Awesome write up. I can’t wait to ride it again!

This is hands down my favorite favorite MTB trail. Greg, let’s do a Singletracks group ride of it this summer!

My lungs are screaming
Scenery goes forever
The crest is epic!

I love when there are articles like this. I’m glad that you had a great time. Dying for retirement and my chance at stuff like this. My wife and I are living it up when I’m done. How does that trailer work out for you? I understand how it goes with photos, i rarely get ones of the fun stuff unless I’ve been before. All of us, take it on and then take photos of the open flowing stuff lol. Have a good one!

Hey man, we’ve been loving the trailer! In case you haven’t read it yet, you can check out my final review of the Sylvansport Go here: http://www.singletracks.com/blog/uncategorized/final-review-sylvansport-go-camper/