Annoyed, snot clung to my nose in the howling headwind, and I could do nothing about it. I was too busy trying to keep my balance and muscle up a steep, muddy trail against a bitterly cold 30mph headwind. Man, that wind sucks. My fat 4.0 Dillinger tires struggled to find purchase in the wet firmament as my front tire wandered back and forth in the gale, hoping to find a sliver of packed snow to ride on.

I hate to ride wet trails. My friend Kristen’s voice echoed in my head, scolding me for riding in the mud… but what could I do? I had already pedaled six miles around the base of North Table Mountain (NTM) over great packed snow, and I was almost to the top of this freezing wind funnel, watching my friend Tristan pull away from me. I wasn’t about to turn back now.

In the past two months, I had ridden this trail in Golden several different times. On the Colorado Front Range, snow puts a real damper on mountain biking. If you don’t own a fat bike, you can’t ride when it snows. When it inevitably warms to 50 or 60 degrees, the snow starts to melt, turning the trails to goo, and you can’t ride anywhere, anyways, no matter what type of bike you have. At least you shouldn’t… unless of course you are crazy and lucky enough to ride very early when the packed snow is still frozen. North Table just happens to be one of the few scenic places around west Denver that remains in good shape despite the weather… most of the time.

The forecast on this day called for a balmy 45 degrees, so Tristan and I decided to start no later than 9am so that we could enjoy the trails before they started to melt. We decided that riding before this hour was just too cold, as the forecast predicted temperatures in the low 20s. I cursed the weather man as I loaded my bike in my truck, realizing that I was already hot just standing in my driveway getting ready to drive to the NTM parking lot. I was dressed for a much colder day, and having ridden these trails, I was hoping that history would repeat itself: that the wind would kick up and I would be a little cold until we started the long climb to the top of the mesa. I grabbed a pair of shorts (just in case) and threw them in with my gear.

Tristan and I met over a year earlier on another popular local trail named Apex. We were both riding the same Niner model–the Jet 9 RDO–so we stopped to chat, and have been close riding buddies ever since. He calls me his “RDO bro”. Funny how that happens.

Like many of my friends, I think he thought I was a little wacko for riding a fat bike on some of the steep foothills trails when everyone else in our group was on long travel, all-mountain bikes. But as I slowly earned some trail-cred for keeping up with, and sometimes passing, my friends on my fat bike, many of them became more curious what this fat biking phenomenon was all about. Tristan was one of a few friends I had inadvertently convinced to take up fat biking as a full-time winter hobby, and I was ecstatic. Last year I rode alone…a lot.

North Table Mountain is made up of several trails that cover the base and the top of this large mesa on the north side of Golden. Sure, they have names, but they are not worth mentioning because it is almost impossible to get lost, and there is a lot of trail re-building and construction after the epic floods damaged Colorado last fall. There is basically one trail that skirts the base of NTM, connected to several neighborhood access trails, and on this day we decided to take this trail on the north and east side for an easier, more gradual climb to the top of the mesa, instead of a very steep fire road aptly named Puke Pitch on Strava.

For the most part, this trail was in good shape: packed and fast, with a few sections of deep powder we had to walk through. As we made our way to the south side, the sun had already started to work on the frozen ground, but we were able to stay on slushy ice or snow most of the time. A lot of runners were out, many with their dogs, and we tried to run over their deep tracks to smooth them out as we climbed. One of the hikers warned us that “everything was muddy” in the direction we were headed, and we quickly figured out that her unsolicited advice was probably aimed at convincing us to turn around and go back, and to keep us (bikers) off of the trail. I know this because we didn’t see real mud for almost 30 more minutes, but it was, as I mentioned earlier, a brutal climb in the slop with the wind roaring down the valley in our faces. I was definitely glad I left those shorts in my truck and kept my cold weather gear on. Ah, the benefits of experience…. 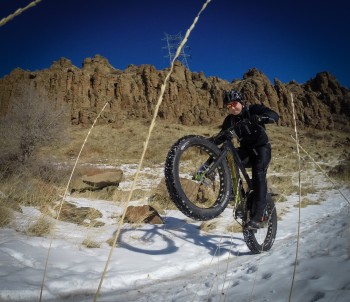 One thing you quickly learn if you spend any appreciable time in Colorado: weather changes fast. The famous local saying is actually “if you don’t like the weather, wait five minutes.” Sometimes this isn’t an exaggeration, either, but gospel. The day before this ride, the weather was near-perfect in Golden, as my wife and I suffered through a blizzard at Loveland ski resort trying to convince ourselves the powder was worth it. It wasn’t. We were happy to get back to warm, sunny Denver.

On this fine day for fat bikin’, however, the wind gusts were so loud that they literally sounded like a jet flying over our head as we wove up the switchbacks on the southwest side, overlooking the Coors Brewery plant. I was banking on the fact that once we climbed out of the valley where the wind was not forced into a geographical funnel, then our experience would improve. Fortunately it did.

We climbed up and over the new rock-armored section that volunteers built after the floods, and the mud gave way to ice and then packed snow, and then lastly a pleasant blanket of powder that covered the mesa almost in its entirety. It was superb: just pure fat biking bliss to finally be on the soft, white stuff after slipping around in that steep, crappy mud.

We rested at the top by partaking in our usual shenanigans: attempting wheelies, roosting up snow around turns, and taking photos of it all.

One of the things I’ve noticed about fat bikers is that they take riding a lot less seriously. They stop to goof off more, laugh more, and they stop looking at their watches or their GPS units. We honestly don’t care what other people think, and we just have fun.

As a fairly recent transplant from Florida, I purchased my first fat bike a little over a year ago because I simply could not stand to put my bike in my garage for the winter and not enjoy the hundreds of miles of singletrack that line the corridor to the Rockies. Many people who come from out of town don’t realize that Denver is not “in the mountains,” but rather that it squats on a high plain that nestles itself right up against the foothills.

This is important because the areas adjacent to this front range are not covered in snow during the winter. On the contrary, there are plenty of random warm days that allow excellent winter singletrack riding around Fort Collins, Boulder, Golden, Colorado Springs, Pueblo, and Carson City. Some of these places don’t see much snow at all, and when it falls, it melts rather quickly.

Fortunately for us, Tristan and I had plenty of snow on this day of riding. Reaching the top was bitter-sweet. We were both tired and needed to get back, but we wanted to ride more. We wanted to find more powder and kick around in it, but we didn’t think we had time to go back around the base.

We decided to explore the matrix of trails at the top before going back to the base. To our surprise, many of them hadn’t been touched, and we were able to see a lot more and play around in really deep powder. We eventually dropped off of the mesa on the north side, and picked up the packed base trail back to our vehicles. Still unsatisfied, we decided to climb part of Puke Pitch anyway, just for the fun of flying down it to spin up some snow at the bottom and snap a photo.

It was an excellent way to spend a Saturday morning with a fellow fat biker I became friends with simply because we once both rode Niners. I’m trying to convince him to take our fat bikes to Moab this spring and see what they can do… we’ll see!

Your Turn: Is there a go-to trail that you like to fat bike or mountain bike in the winter when your other local trails are in less-than-ideal shape? Have you ever bumped into someone on a trail and started riding with them?

Man that looks like fun! If I lived somewhere closer to snow, I would definitely pickup a fat bike. Here in Atlanta I hit the trails on my Krampus when we had the snowpocalypse and it was a blast, perfect amount (2-3 inches) for the Knards but much more and they wouldn’t have cut it. Great article… Jealous!

If you are ever in Denver, let me know. Fat bikes are fun year-round…

Awesome blog Paul! Fat bikes are so fun, I’ll be bringing it to Moab for sure.

Must have one ! at least before I can be a full time resident of the great white North.