On Thursday afternoon our group of four riders cruised down into Moab after 7 days of mountain biking from Durango to Moab. With limited cell phone service along the way (I only got a signal once) I’ll be sharing all my updates and pics this week along with articles on packing, gear reviews, logistics, and more.

Thanks to mudhunny for holding down the fort while I was gone. Look for pending GPS submissions and videos to be processed later this week.

Nate and Matt arrived at Durango Mountain Resort (DMR) early after parking the truck in Moab and catching the Porcupine Shuttle to Durango. The locals recommended skipping the fire road start out of DMR and shuttling to 10,800-foot Molas Pass to ride the Colorado Trail to the first hut. Since DMR sits at roughly 8,000 feet and the hut was at 11,400 feet we figured this would be a good way to skip some of the 3,000-foot climb to the hut. Bad assumption. 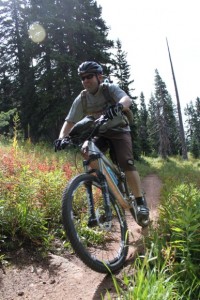 Our shuttle driver described the day’s route as “rolling” and the first part of the climb wasn’t too bad. We were passed early on by a group of day-trippers and later we passed another group of self-supported riders on a 4-day trip down to Durango. The trail eventually climbed above treeline and all of us struggled to adjust to the altitude since most of us had been at sea level just a day before. I crashed at one point on an easy section of trail and scraped a good bit of skin off my leg, a result of pure exhaustion. This part of the Colorado Trail eventually tops out around 12,500 feet and we were all anxious to descend off the windy pass. We lost 1,500 feet over the next 3 miles and then began another climb through a forest sliced with rambling creek crossings. 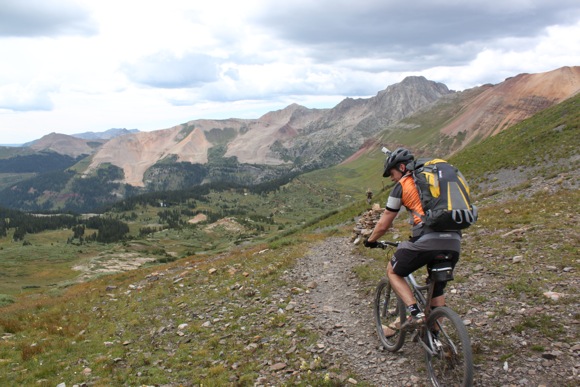 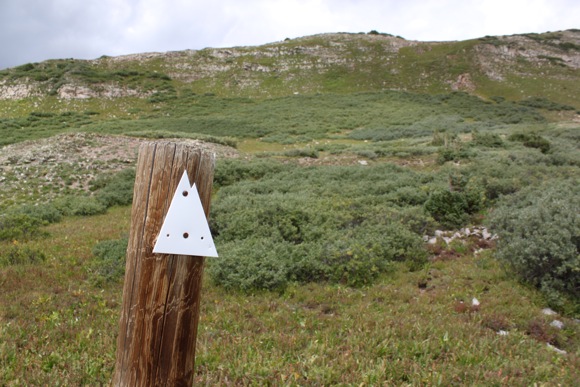 Near the end of the descent I got a pinch flat, a result of not inflating my rear tire enough before we left. I brought 4 spare tubes for the trip and was a little pissed that I had to use one already but figured I wouldn’t make the same mistake again. But after just a couple miles I could tell I didn’t add enough air to my tire using the mini-pump so I decided to add more. Now I’m not sure if it was because of fatigue or if my pump was faulty but I ended up shearing off the valve stem on my presta tube, sending a blast of air toward the sky. Two tubes down, halfway through day 1. 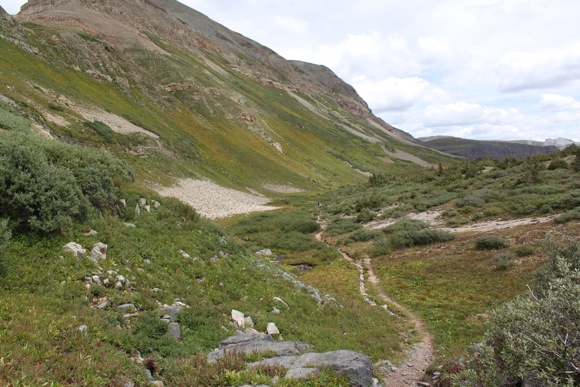 By this time most of us were walking our bikes anyway because we were spent and the trail was rocky and steep in places. We had a map of the area but weren’t quite sure how far we were from the hut. The hut outfitters provided us with GPS tracks for each day but unfortunately only the standard route had been mapped. Eventually we came out at a fire road and seemed to lose the Colorado Trail completely. After about a mile down the road in the wrong direction we corrected our path and finally made it to the hut at 6pm after more than 8 hours in the saddle. Total mileage: just 24 miles and 4,200 feet of climbing. 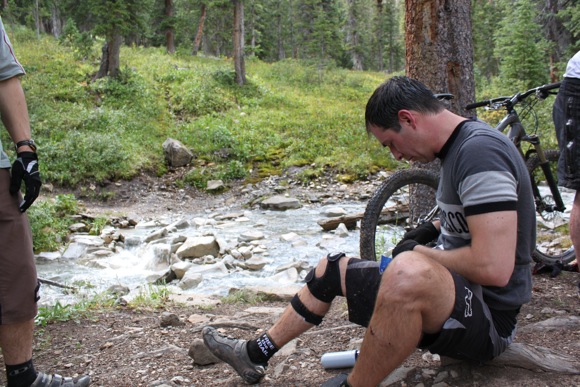 Most of us drained our 100 oz. hydration packs & at least one water bottle on day 1. Good thing we brought along a water filter.

Each hut along the route is located just off a forest road and we had a key to open the doors and windows. I was the first to arrive at the hut and was shocked to find the door was completely wide open! The huts are stocked with food, candy bars, water, beer, sleeping bags, bunk beds, and other stuff and I was assuming the place would be completely ransacked with the door wide open like that. As far as we could tell the only group in front of us was about 4 days ahead which would have given someone plenty of time to clean the place out. Fortunately, everything was in place (though there were only 2 Snickers left 🙂 ). 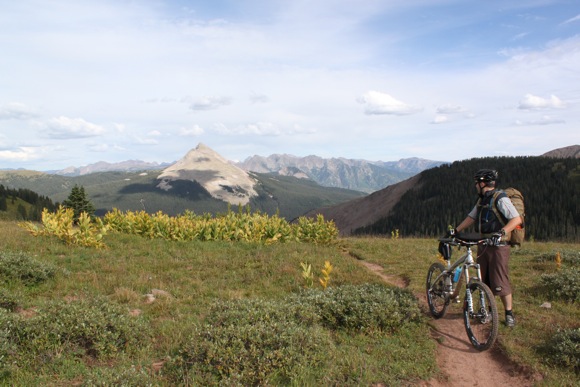 After devouring candy bars and pretzels we were all too tired to cook and to be honest I wasn’t sure how I could make it 6 more days. Our first day was supposed to be easy but we barely made it in before dark – what would longer days with more climbing look like? Soon after we arrived we spotted a group of deer grazing just outside the hut which was somehow calming after a stressful day. 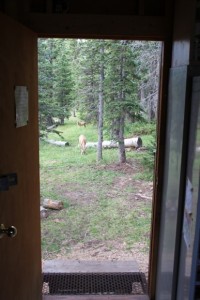 Deer right outside our hut door.

We stoked the wood-burning stove and turned the lights out around 8:30 that night as the temperatures dipped into the low 40s, happy to be in our sleeping bags. Stay tuned for Part II, days 2 & 3 on the trail.

Gear
Hunt Revises Enduro and Trail Wide Wheels, Still Retail Under...
Gear
OneUp Has Another Steerer Tube Tool Option With Additional Functions
Community
From Pup to Trail Dog: How we Prepared our Singletrack...
Progression
MTB Riding Position Breakdown: The How and the Why
Subscribe
Login
Please login to comment
19 Comments
Most Voted
Newest Oldest
Inline Feedbacks
View all comments

Nothing like riding above the tree line to make you appreciate oxygen.

What are you doing still using tubes Jeff!?!?!?!

Looks like you guys got to enjoy some beautiful scenery!

Good question dgaddis. 🙂 I debated switching to tubeless just before the trip but ran out of time. Everyone else was running tubed tires, though they were all on 26-inch wheels w/ full suspension.

I HIGHLY recommend the Innovations Air Chuck CO2 inflator. It’s light weight and makes super short work of re-inflating a flat no matter how tired you are.

Nice pics so far…I can;t wait to see the rest!

Dying to do a trip like this. Maybe in the New England area first. Any ideas?

@Johneblz, I seem to remember writing about a hut system that was opening to bikers somewhere in Vermont (or was it New Hampshire?). Can’t find it in the archives, anyone remember when we wrote about that or have the link?

Sounds like you guys have had a TON of fun so far. We need more pics!

Sea level to over 11,000 feet is no joke. You should almost just be thankful you don’t have elevation sickness, haha!

No kidding. I spent about a month in the Denver area last winter for work. At the time I was working out a lot. 20+ miles of running a week, one or two days of weights, and big rides on the weekends – I was in the best shape of my life. Got out there and couldn’t do anything. I was fine just walking around going to work, etc. But I tried running a few times and never made it more than just a few minutes without getting a horrible headache, even after being there for several weeks and jogging at the easiest pace possible.

[…] me, the most stressful part of planning our recent Durango to Moab hut-to-hut trip was figuring out the transportation logistics. During the trip itself things would be simple […]

Bikepacking Gear: The Good, The Bad, and The Unnecessary | Mountain Bike Blog || SINGLETRACKS.COM

[…] you read about our trip you know I personally had problems with my tire tubes. So it should be no surprise that most of my […]

Gearing Up for 29 Trails in 29 Days | Mountain Bike Blog || SINGLETRACKS.COM

[…] debated about switching over to the SRAM X0 2×10 drivetrain before my Durango to Moab ride over the summer but I just didn’t have enough time to get everything installed. I really wish […]

[…] summer I rode from Durango to Moab with three friends through San Juan Hut Systems and it was a great trip. The company provided a series of rustic huts stocked with food and bunks in the National Forest […]

[…] out of gears initially, I eventually got used to the set-up. I even rode 1×9 on my ride from Durango to Moab last summer and only rarely did I have to get off and push. Shortly after that trip I decided to […]

Just listened to this episode of the podcast, it was very inspiring, well read, and fun to listen to. Would love to hear more of these in the future!

[…] filled breaks with trips to Western North Carolina and Colorado. In fact, three of us went on a hut-to-hut trip from Durango to Moab a couple years after graduation and had a […]