Recap: 3 tubes down, only 1 spare remaining (everyone else was riding 26-inch wheels). We’re 87 miles and 3 days into a roughly 220-mile hut-to-hut mountain bike trip from Durango to Moab. Hard rains overnight have left the ground around our hut sticking to everything (shoes, tires, bags, etc.). 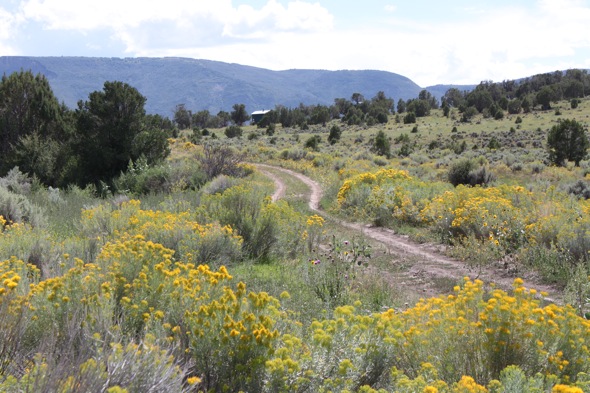 Dry Creek basin was anything but dry when we awoke and based on the conditions we were seriously considering the alternate “muddy day” route. In fact, the route description said if things were super muddy our best bet would be to ride on the road to the town of Naturita, get a motel for the night, and skip the Wedding Bell hut completely. The route description also mentioned dust storms could be an issue along the way but we figured the previous night’s rain would at least keep that under control.

The plan was to head out on the overgrown and rutted doubletrack to see just how muddy things were. Fortunately conditions were decent with only the occasional mud bog along the way. After a few miles of sunflowers and fragrant sagebrush we spit out onto a wide gravel road and blasted down to the town of Basin, CO. 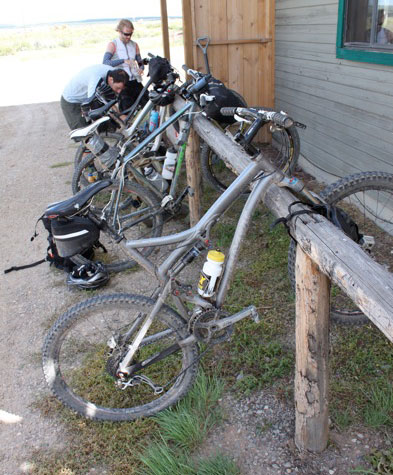 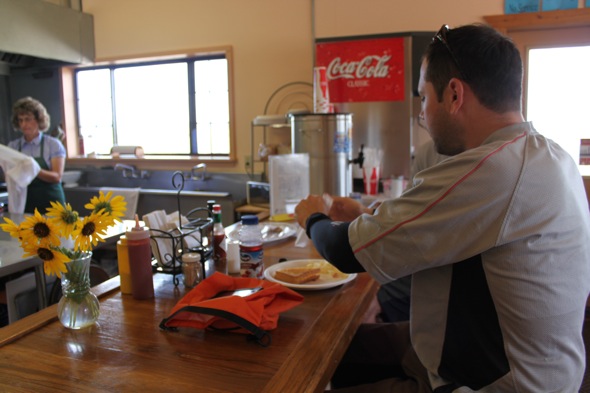 Basin really isn’t much of a town (there’s just one store as far as we could tell) but we were able to stock up on cold drinks, chips, and hand sanitizer before heading out. Matt even ordered a grilled cheese and tomato sandwich from the kitchen despite the fact that it was only 10:30am. 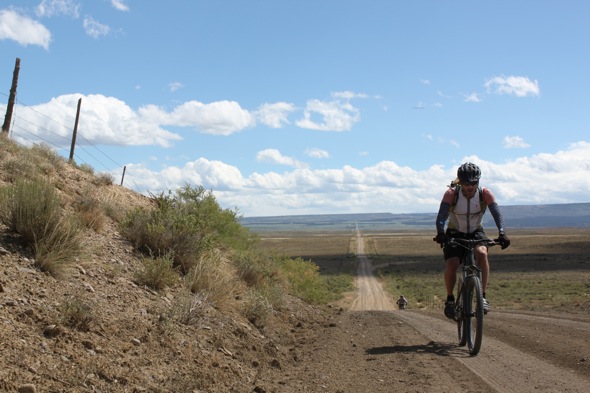 From Basin we took road U29, an unpaved farm road that seemed to stretch into infinity. There were several short steep climbs but mostly the road just seemed to go up. With the wind full in our faces and little change on the horizon it felt like we were riding stationary bikes for hours on end. This would be the first of two long valley slogs between mountain ranges, a boring but necessary part of our journey. 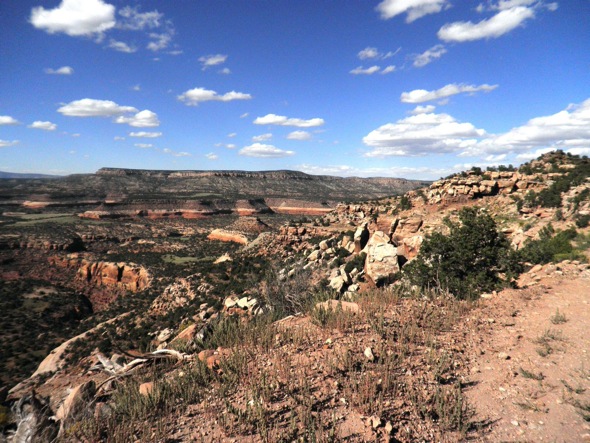 At around mile 30 we crested the final climb and were amazed to see that we had been climbing a ramp the entire time with canyons unfolding ahead and below. We began descending the rocky road which was a blast after all that flat climbing. We found the hut about a half mile away from the main dirt road with surprising and amazing views of the Delores River below. 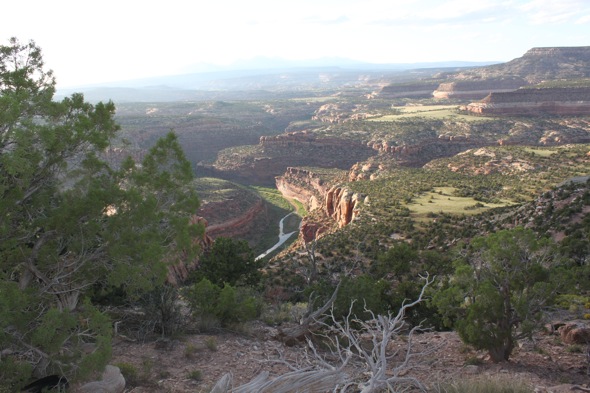 After a dinner of boxed macaroni and cheese with spam (made from powdered milk and no butter) we explored the area around the hut. The landscape was pocked full of rusted cars, broken glass, and abandoned uranium mines but offered some of the best sunset views of the trip. 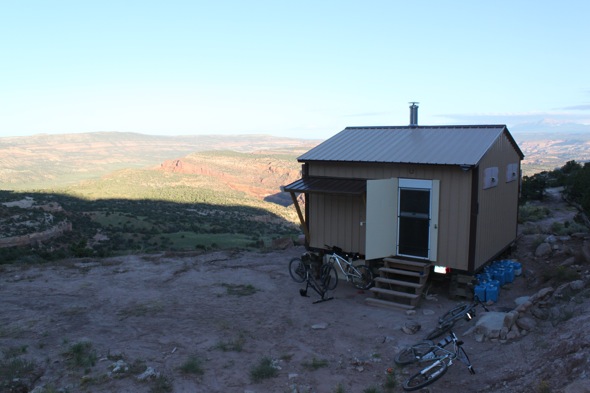 The next morning Jake mentioned his tires were low due to the change in altitude over the past few days (we were now somewhere around 6,500 feet) and suggested we all check our pressures. My front tire definitely felt like it could use some air so I added a few strokes, removed the pump, then stared in horror at my bent presta valve stem! I quickly attempted to screw it down but the air was rushing out. Matt was nearby and came over to assess the situation. With one quick motion he broke the bent stem off and the hissing stopped. Nate remarked that he had done the same thing once before but didn’t get more than a couple hours out of the tube before it went completely flat. Fortunately I was able to patch one of my pinched tubes the night before so I at least had two *potential* replacements. 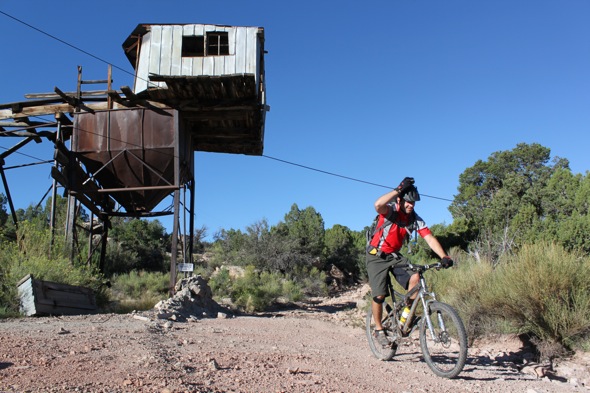 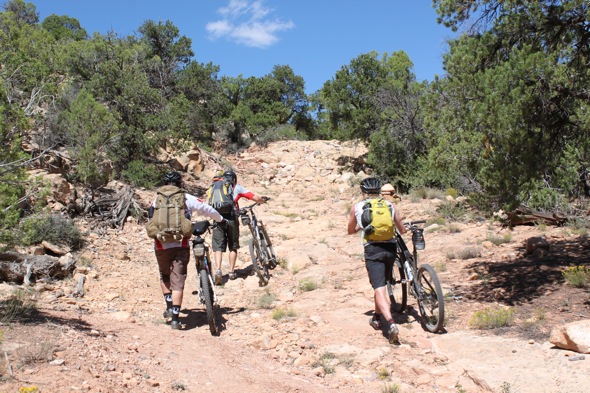 Our route for the day started back on the often rocky BLM road we traveled the afternoon before and traced the edges of Bull Canyon for about 8 miles before beginning a sustained climb onto the mesa above. From the mesa we could see the “town” of Bedrock and the green Paradox valley below. Our path into the valley? The infamous Catch-em-Up trail. 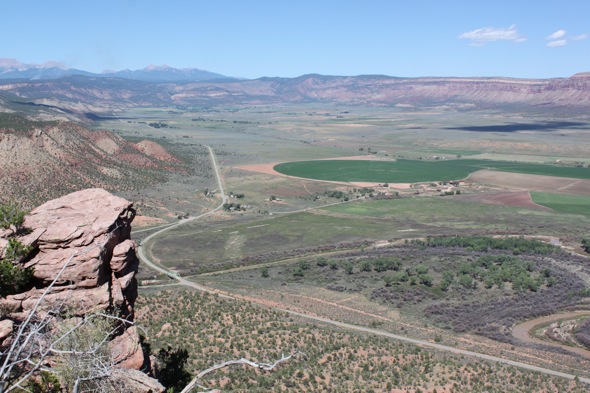 Catch-em-Up started out as a shortcut trail used by cattle ranchers to move their herds out of the valley for summer grazing up on the mesa. Our route guide painted this as a “must ride” (though there was an easier alternate) and promised 1,100 feet of descending in just 1 mile. Matt lowered his seatpost and tucked in for the descent which went pretty well at first. Until, that is, the trail became completely ridiculous. Huge boulders, non-existent lines, sharp switchbacks, and steep angles made it impossible to ride more than a few feet at a time before dismounting. To his credit, Matt rode way more of Catch-em-Up than the rest of us, though I think he was a little disappointed with the condition of the trail. 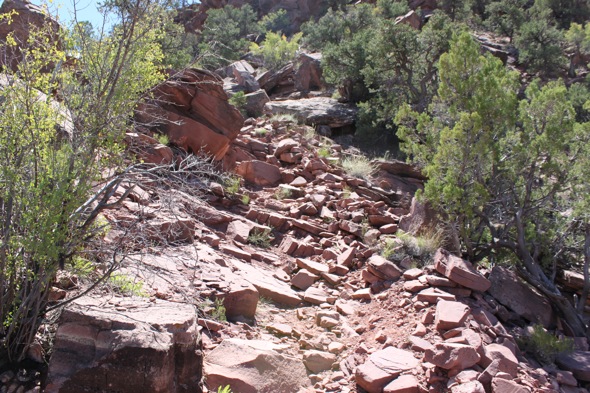 At the bottom of Catch-em-Up we rode less than a mile to the Bedrock Store and scarfed down microwave Philly Cheese Steaks and Chimichangas. The rest of the ride featured flat roads across Paradox Valley with amazing views in every direction. The night’s hut was located near the Paradox Valley Bed & Breakfast where we scored hot lasagna, salad, garlic bread, and cinnamon rolls for just 10-bucks each! It was hot in the valley (we were now at 5,500 feet) but the quiet, farm vibe was relaxing ahead of our 5,300 foot climb on day 6. 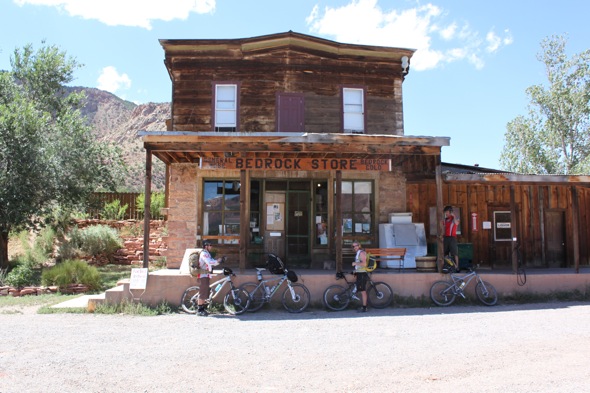 Gear
OneUp Has Another Steerer Tube Tool Option With Additional Functions
Community
From Pup to Trail Dog: How we Prepared our Singletrack...
Progression
MTB Riding Position Breakdown: The How and the Why
Gear
Hunt Revises Enduro and Trail Wide Wheels, Still Retail Under...
Subscribe
Login
Please login to comment
14 Comments
Most Voted
Newest Oldest
Inline Feedbacks
View all comments

Enjoying the report! I’m a little confused about the bent valve stem…I’m assuming the rod that goes into the core was bent, right? Not the outter section the cap screws onto.

Yeah, the threaded, inner stopper core part was bent and then sheared off. You still have those on tubeless tires dontcha? 🙂

….maybe….lol – but at least you’d still have all 4 tubes! Looks like a great trip.

Thoroughly enjoying your reports!!!!!!!!!!!! Looks like an awesome time and an epic trip!

Just curious as to why you think you were the only one who seems to be having so much trouble with the tires. Did you ride full susp.? This trip looks Epic. Really enjoying the report and the great pics.

Johneblz, no one else had a single flat. I was the only one on a hardtail which might have had something to do with it. Also, I typically ride pretty light so with an extra 30 pounds of gear I probably should have adjusted my riding style a bit.

Beyond that, the real problem was starting with low pressure and being lazy with the mini pump along the way. I’ve always hated those things and probably need to take a class or something on how to use one properly after this. 🙂 Presta valves are also on my s%!t list for trailside tire changes. Seems like Schraeder valves are a little more durable (plus you can fill them at a gas station in a pinch).

Really great report. Sorry you are having such issues with the tires, but I’m sure it’s all worth it. Looking forward to Part IV.

Digging the reports. Nice to see pics from the area. The Bedrock store is a classic spot, not to mention the whole Paradox Valley.

Looking forward to the next chapter.

@smorris, I’m a little embarrassed to know you’re reading my report. This trip was like a stay at the Ritz compared to the stuff you do on the bike. 🙂

Using a 26″ tube was actually my backup, backup plan if I ran out of patches and/or patchable tubes. Fortunately it never came to that!

@trek7k, I was checking out the website that offers these trips. Amazing stuff. I got to thinking about the logistics getting out there. Did you drive out, or fly and ship your bike and gear (that would make me nervous)? Also, how far in advance had you been planning this trip?

I’ve also been loving the ride reports! Great photos, good details, but not too much as to be overwhelming. I can’t stand the long, 5,000 word race/trip reports. This looks like it was an absolutely incredible trip! The views are phenomenal!

@fleetwood: I’m planning on covering logistical stuff in an upcoming post but yeah, flew out with the bike and took the Porcupine shuttle back to the start in Durango. It took a fair amount of planning but it certainly wasn’t overwhelming.

@Goo, the bike worked great other than the tires but again, it was totally my fault for running such low pressures initially. Not only was I on a 29er but I was also geared 1×9 which made things tougher but (ironically) also made me faster than everyone else on the climbs (no granny gear to fall back on).

On the descents I was slower because I was on a hardtail but also because of the awkward weighting due to my bar bag. I won’t get into a ton of detail here (also saving that for a later post) but I will say I was really happy with the configuration given the total trip (more time spent climbing than descending).

Cool, looking forward to reading the logistical posts as well!

Looks like the kind of trip I always wanted to try to do on my bike. I always wanted to do some sort of long camping trip on my bike…like an extended backpacking trip but have never had the opportunity to make it happen. As far as the tubes; my son lives in Texas and had to go to heavier tubes with the schrader valves plus some liners and somes Stans or something like that in his tubes. Lot of extra weight but it stopped him from having flats. The first time I went out to ride with him he told me I was going to flat and I ignored him. A mile into the first trail I was flatted. Just a little input on the tubes. Really enjoyed the articles.