Although this is the final trip report, I’ll be posting additional articles over the next few weeks covering packing strategies, gear reviews, logistics, and more. For those following the saga of the tire tubes this week here’s the spoiler: I made it to Moab with my last spare and a patched tube – no more problems. In fact, I even rode this week on the front tire with the missing valve plunger and it’s still holding up great! 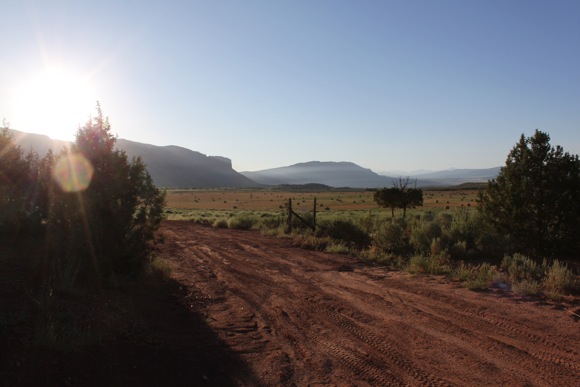 This was the day we had all be anxiously awaiting: 5,300 feet of climbing over just 25 miles. None of us had ever climbed that much in a single day so we really weren’t sure what to expect. On the one hand, it was day 6 which meant the trip as almost over. On the other hand, we had a LONG way to go before all that downhill in Moab. After 5 days of riding we figured we were at least in better shape than when we started. 🙂 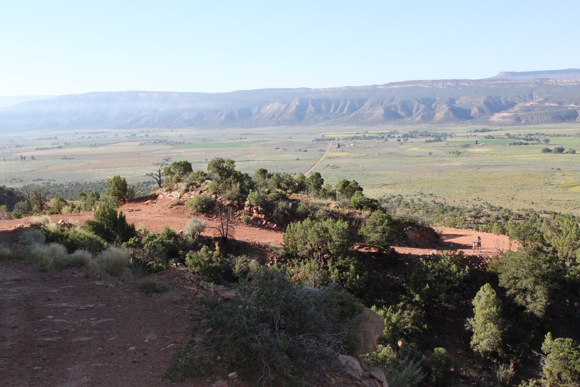 Paradox Valley is basically surrounded by mesas on three sides so we knew we were in for a steep, early climb to get out of the valley. We didn’t realize it at the time but we would actually be following part of the 105-mile Paradox Trail that links the Tabeguache and Kokopelli’s trails. Just a mile from the hut we began a 2,000 foot ascent with incredible views of the valley below. One member of our group had been suffering knee problems over the past several days and was luckily able to find a local to shuttle him to Buckeye Reservoir about halfway to the next hut. 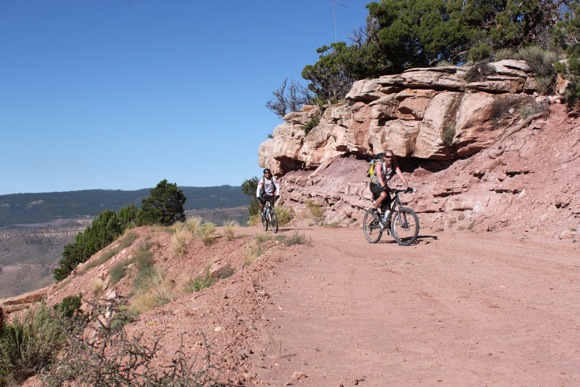 The top of the first climb of the day.

After about an hour and a half we made it to the top of the mesa and the scenery quickly changed from scrub and cacti to tall pine forests. The ground beneath us was still dry but at least it was cool and shaded. After another 1,000 feet of more gradual climbing we made it to Buckeye Reservoir and eventually the Colorado / Utah state line. 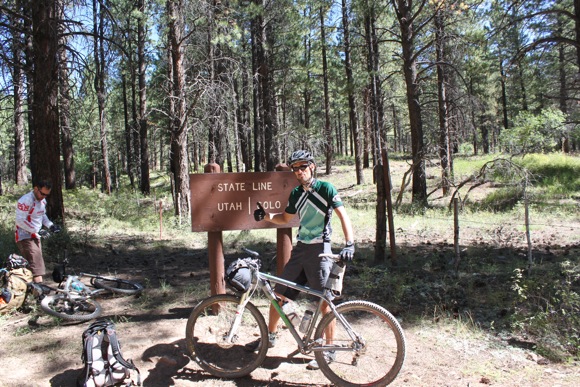 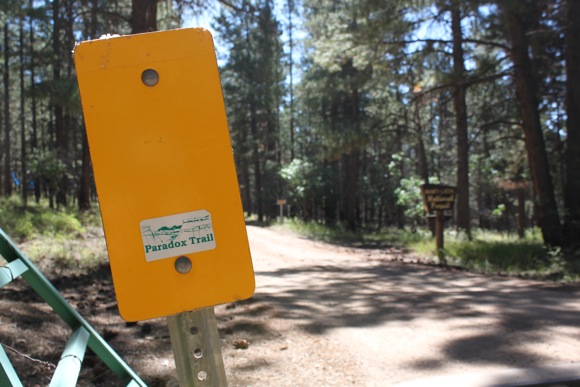 We ate a quick lunch of peanut butter and jelly sandwiches at the line and continued to climb and the scenery changed again with rushing streams, placid lakes, and aspen trees all around us. At around mile 20 we veered off the forest road and onto a private ranch doubletrack for the final 4 mile climb to our hut. 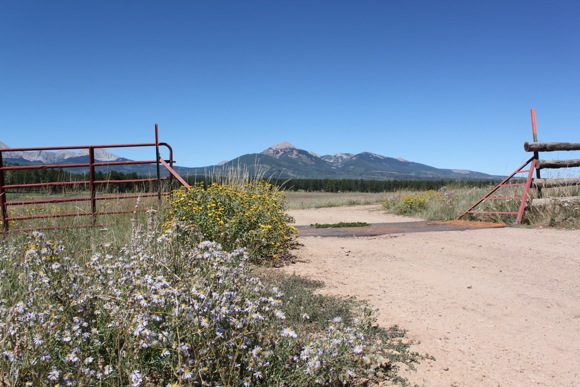 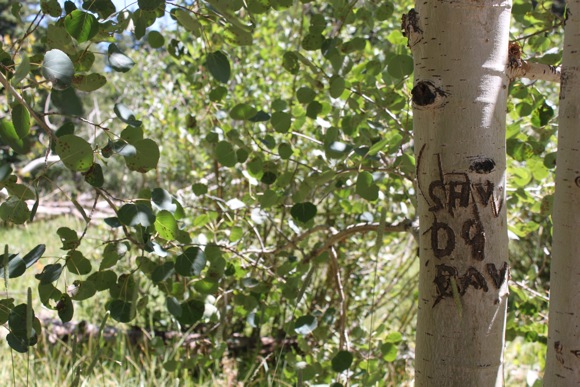 The night before we had received updated directions to the Geyser hut because the hut had been moved just the week before. The new hut location was about a mile closer than the old one and the route was to be marked with red tape tied to tree branches. Now I’m not sure if exhaustion played a role here but we completely missed the flags and ended up just a quarter mile from the old hut location before we realized we were lost. Not only that, we were now in the middle of a herd of cattle with a snorting bull less than 50 yards in front of us. We could literally see the steam coming out of his nostrils!

Turning back down the trail, we retraced our steps and found the steep approach to the new hut location. Including our detour we had climbed 5,900 feet that day and were wiped out from the effort. At least we had 7,000 feet of descending to look forward to the next day! 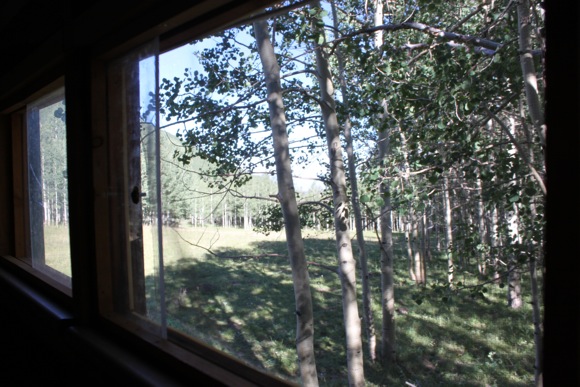 Top-bunk view from the new hut location. Not too bad. 🙂 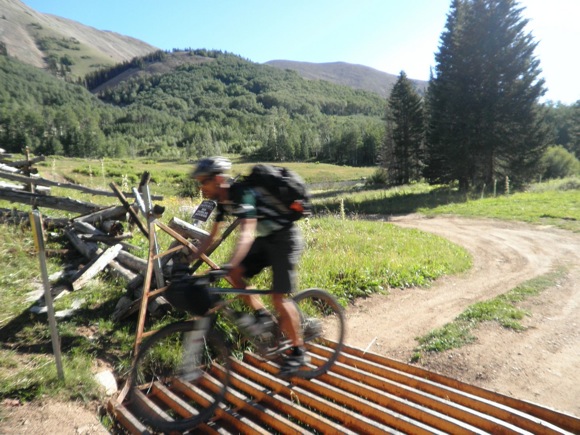 Before we could enjoy our 7,000 feet of descending we needed to start the day with a push over Geyser Pass itself. This meant about 1,000 feet of climbing which actually went by fairly quickly (we walked a fair amount of it on the ranch roads). As soon as we left the property we saw groups of shuttle riders heading up to Burro Pass and passed shuttle vans parked on the sides of the forest road. 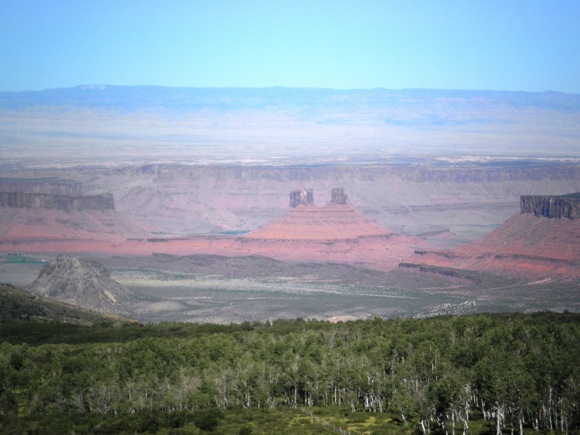 I won’t talk much about the change in scenery between Geyser Pass and the town of Moab other than to say it’s a stark contrast. Our minds were blown pretty much the entire way down. 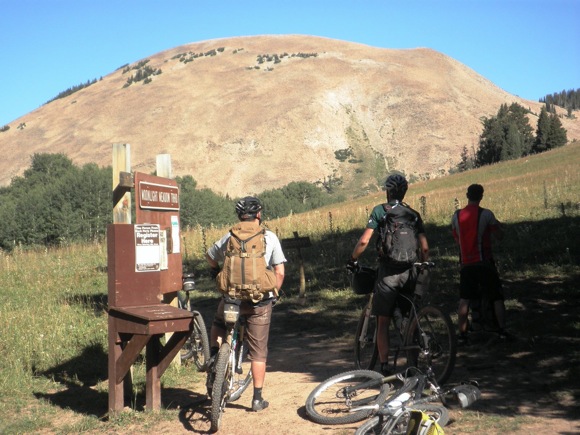 We mapped a customized route for the day that included the Moonlight Meadows trail which turned out to be a high alpine, cow-carved singletrack through meadows and aspen groves. Moonlight Meadows fed into Clark Lake trail which was basically more of the same, though with more evergreen forest and stream crossings. 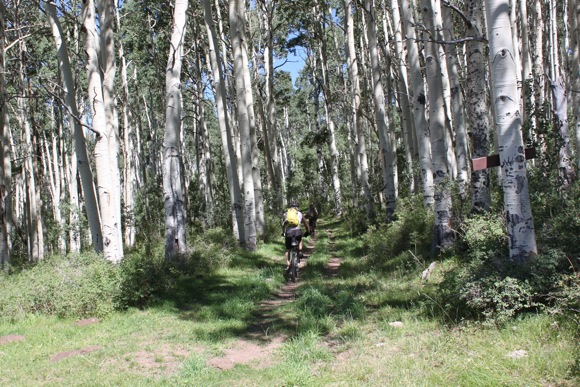 From the bottom of the Clark Lake trail we took a connector back up the mountain to get to the Hazard County trail. I was a little frustrated that we were still climbing and not making progress toward the town of Moab but that quickly went away as we started the Hazard County descent – banked turns, incredible views, and smooth singletrack. My favorite singletrack of the entire trip! 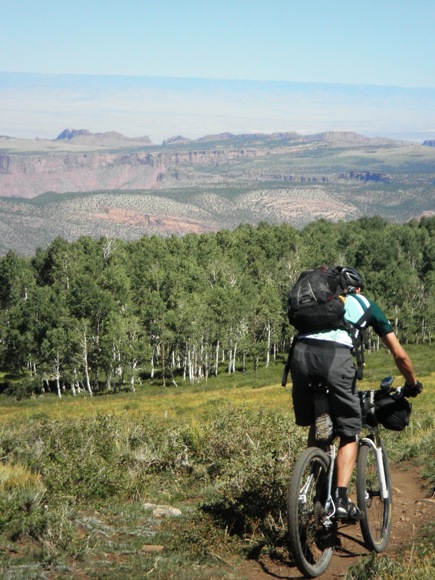 Hazard County dumped us onto Kokopelli’s trail which, at this point, is basically a forest road but it was fast and fun descending to UPS. The UPS trail reminded me of Gooseberry Mesa a bit – sections of slickrock, chunky rocks, and quick stretches of hardpack and sand. Most of us crashed at least once on UPS (including myself – twice) and to be honest I wasn’t happy with my bike handling on the technical stuff. I decided to skip LPS and Porcupine Rim and headed down into town on Kokopelli’s Trail while the others completed the gauntlet. 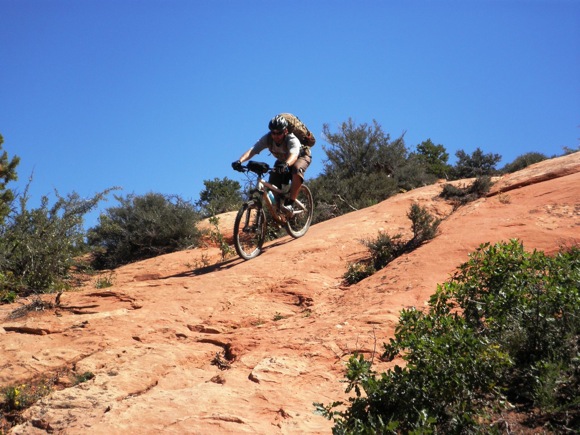 Just before 4pm we regrouped at the Moab Adventure Inn, changed out of our bike clothes, and scarfed burger and beers at the Moab Brewery before Jake and I took the Porcupine shuttle back to Durango. Our epic Moab singletrack tour put us into Moab a couple hours past our ETA but fortunately the super guys and gals at Porcupine waited for us and didn’t give us too much s%!t. We felt kinda bad about how dirty and stinky we were, especially sitting in such a nice new van for the 3 and a half hour ride! 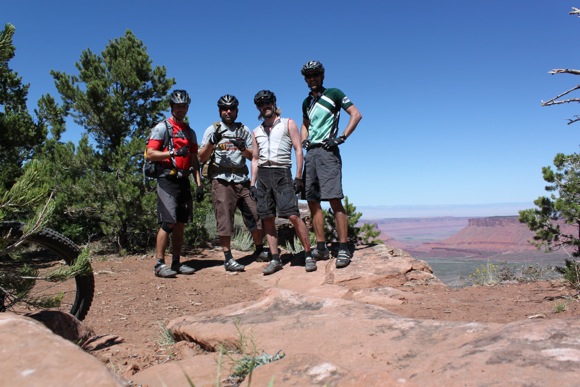 While the trip was difficult and frustrating at times I felt a little bummed that it was over so quickly. Fortunately Jake and I had an extra day to relax in Durango before early flights Saturday morning. I even surprised myself by getting back on the bike the next day and tooling around the Telegraph trails a bit. This is one of those trips all of us will remember for a long time – at least until the next one!

Wow awesome visage. Wish I was there..

Jeff – great writeup. I enjoyed it. It’s on my bucket list. In the meantime, DGaddis and I will be bikepacking locally over the cooler months.

SMorris – thanks for all you have done with Topofusion and bikepacking.

So how did you guys feel everyday? I’ve never done long days back to back like that, not sure how my body respond…probably not happily haha.

Dude, in retrospect, would you bring a hardtail again… or would you have done things differently? Hearing how you ditched the LPS, had a hard time on the UPS, and got all those flats….I wondered what you’d have done differently if you did it again…

@Dustin Gaddis: We were all pretty tired at the end of each day so we basically just ate and rested to be fresh for the next day. I thought recovery might be an issue but it really wasn’t thanks to our routine.

@Stamps, as I mentioned in another comment thread, I would definitely ride the hardtail 29er on a trip like this again. Flat tire issues were 95% due to low pressures and I was the fastest guy on the climbs with my hardtail (and we spent well over half our time climbing). I’m really glad I didn’t lug a FS bike 200 miles just to have a little more fun on the last 20! 🙂

I hope they cut you a good deal because it looks like you just drummed up a lot of business for them.

Really enjoyed the write up. Sounds like a trip to remember.

Great writeup! Some friends and I did this ride earlier this summer and LOVED it. Absolutely an amazing adventure through some of the most beautiful scenery in the US. We were a little astounded by some of the negative comments left in guest books by groups before us. We had a blast making fun of them- hope you enjoyed some of our entries!

Your pictures and comments reminded me of everything we went through on this trip. It’s hard, but worth it. The feeling of accomplishment when we finished was awesome.

Luckily for us, we live in Colorado and arranged for a friend to shuttle our cars from Durango to Moab. So we had vehicle with ice cold PBR’s at the end of porcupine rim! We also got SUPER lucky with weather. We had bright, sunny days and only got caught in a brief storm on the way to Paradox hut. We only had 3 flats between all 6 of us the entire trip…

when does the next trip leave out? 🙂

Matt from sfdirtlabs.com also posted a write-up about our trip. For those who want more, here’s another perspective and more pics:

Here is the place that does the trip, and the dates:

This sounds like one awesome ride…Who takes care of the huts (replenishments, etc..) in case I want to arrange a similar trip?

sounds like a great time i definitely hope to make this trip with some friends some time this summer!

[…] Trails I'd Like to Ride Again (and Again!) My Top Five: The Best Mountain Bike Trails in Moab Mountain Biking Durango to Moab: Part IV # […]