If you read my work religiously, you’ve probably heard me say this multiple times before… and now you’re going to hear me say it again: if there’s one thing that keeps me coming back to the sport of mountain biking day in and day out, week in and week out (besides from the fact that my paycheck now depends on it), it’s the hunger to explore new places.

We have over 8,000 trails listed in the Singletracks database, and of those 8,000 I’ve ridden a little over 750 (340+ trail systems). Man, I still have a long way to go to even reach a tenth of all the trails we have listed! And yet, despite this massive list of places to ride bikes on dirt, and despite having worked to catalogue trails for the past 15 years, there are still trails, even a half an hour up the road from me, that have not yet been added to the Singletracks database.

So, on Day 2 of 30 Days of Biking, I decided to hop in the truck and drive on up to Buena Vista to check out some of their as-yet uncatalogued singletrack.

I began my last-minute afternoon trip with a quick call up to Boneshaker Cycles to check on the trail conditions. Apparently the trails had been dry for months, so I loaded up the pickup and hit the road!

I stopped by the bike shop to grab a zoomed-in map of the local trails, and to get some recommendations. After a quick run-down from Devin, I hopped on the GT Force and headed towards the dirt.

From downtown Buena Vista, I rode straight down the road to River Park. Despite being on a massive all-mountain rig, I couldn’t pass up the chance to shred a few warmup laps around the local pumptrack: 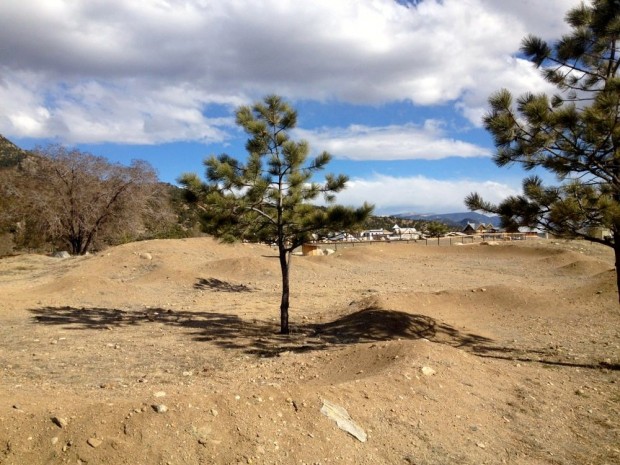 The Whipple Trail System is accessible via a pedestrian and bike-only bridge that leads directly to singletrack. What cooler way to access the trails than to be 30-40 feet above a rushing river?! 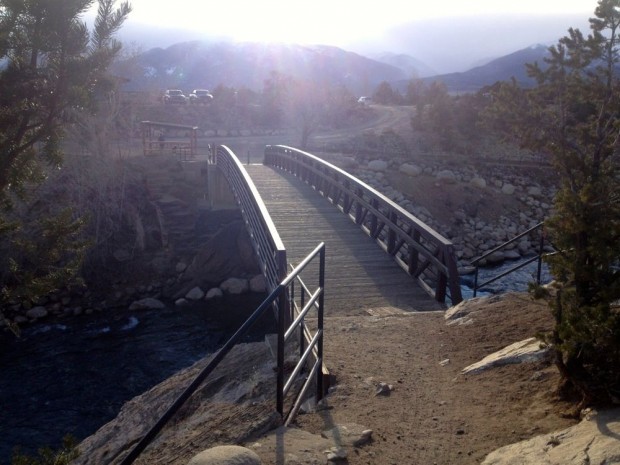 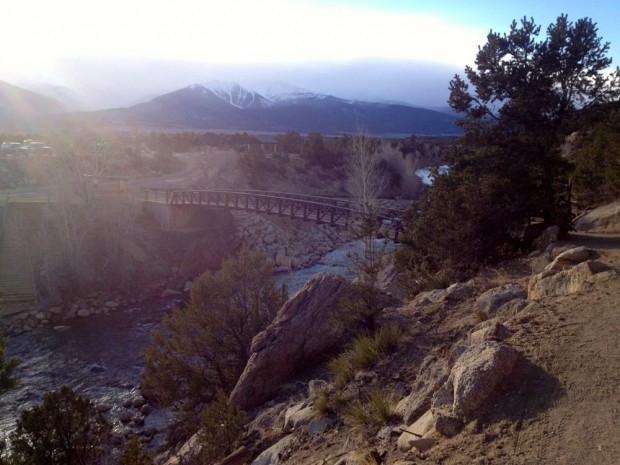 I pedaled my way up the hillside on what turned out to be the Whipple Trail. I was trying to pick up North Whipple, but whichever way you go you’ll end up climbing to the Midland Trail, and will be able to access the Broken Boyfriend trail, which is what this small trail system is all about. 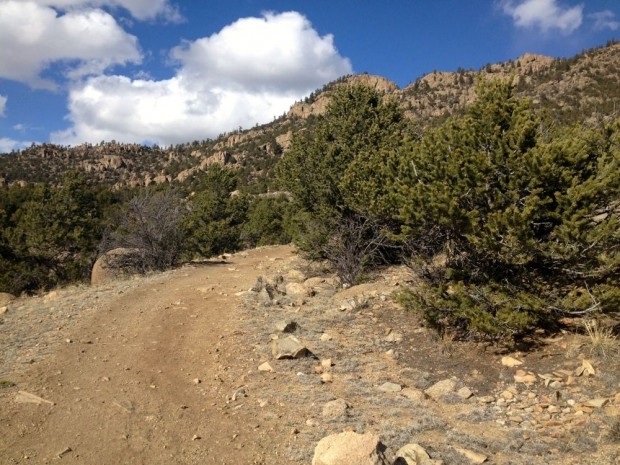 While the trails duck and weave through pinion pine and other shrubby undergrowth, the vegetation opens up frequently to allow jaw-dropping views of Buena Vista with the Collegiate Peaks in the background: 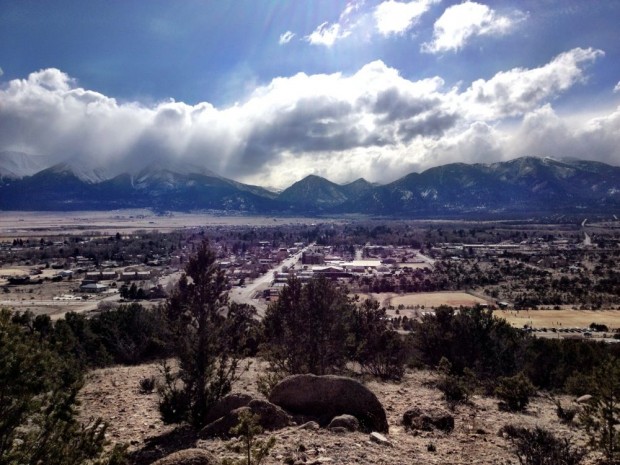 Broken Boyfriend rolls along through the pinions and scrubby pines, on sandy, dry soil and over rough, rounded rocks. While I wasn’t awed or humbled by the technical nature of this trail, the rocks, swoops, and turns keep things interesting, while not being too challenging. I’d rank it as a solid intermediate ride. 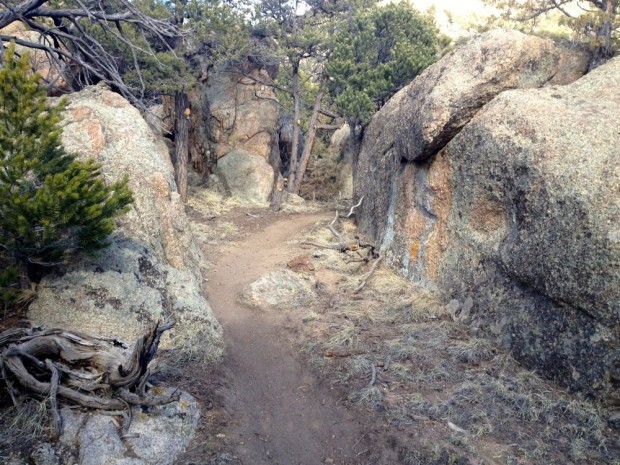 The steepness of some of the initial climbs and some of the rocks are definitely more than some beginners will be up for, but if a novice is willing to hop off their bike for a rock or two, the Whipple Trail System would be a great spot to help them progress their skills. 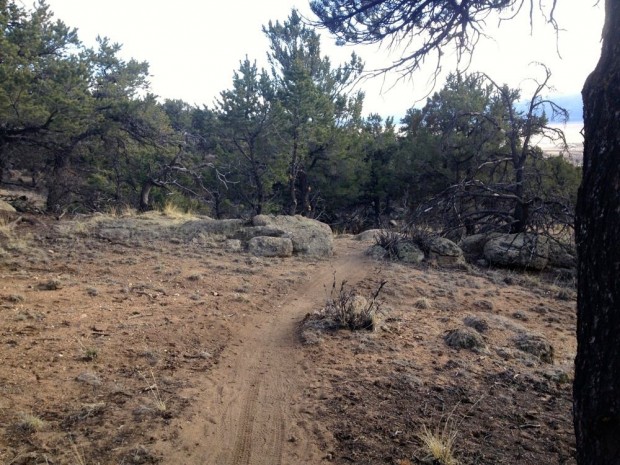 Unfortunately, there just isn’t very much mileage here, but I took Devin’s advice, hopped on the old Midland railroad grade, and pedaled over to the even newer Midland Hills trails.

After a short two-mile spin over to the other trails, I dropped into the Django descent. While it was a great descent with awesome swooping turns and plenty of rocks to keep things interesting, it is still quite climbable if you want to go uphill. I was hoping that eventually it’d open up a bit and allow me to get my speed up or bomb straight down some gnarly spots, but those opportunities didn’t materialize. This singletrack was definitely built with two-way traffic in mind. 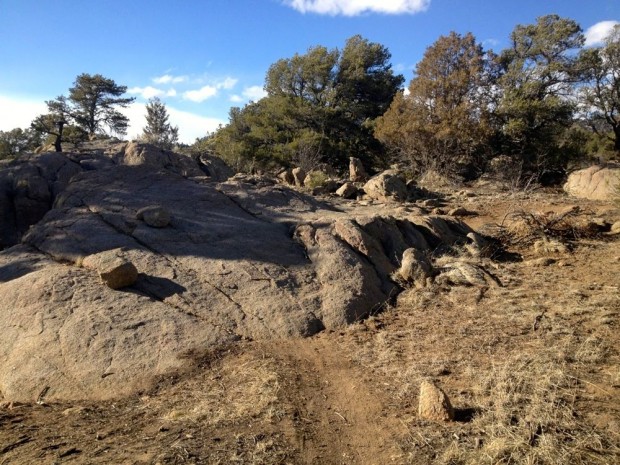 After finishing Django, I climbed back up towards Fistful of Dollars, and hung a left down A Few Dollars More. While A Few Dollars More is the stick of the lollipop, it was well-worth dropping down this singletrack, even though it meant I had to turn around and retrace my steps back up.

I finished out the entertaining climb up Fistful of Dollars, picked up the railroad grade, rolled back to the Whipple Trail System, and dropped down South Loop back into Buena Vista.

16 miles and 1,500 feet of climbing later, I was ready for a beer with the guys at Boneshaker!

After my entertaining afternoon ride, I got the impression that these trails are like Arkansas Hills Lite. The hills aren’t as steep here as they are right out of Salida, the rocks aren’t as gnarly, and there aren’t as many miles of trails. However, the ecosystem is essentially the same as that of the Arkansas Hills, just located a bit further up river. So, the views are similar, the trees and vegetation are similar, the sandy soil and rocks are even similar.

I’m definitely going to keep my eyes on the BV trail system as it continues to grow and expand. If you haven’t had the chance to ride in the area yet, I definitely recommend you carve some time out of your schedule and make it happen!

Looking forward to riding with you, Paul!

glad to see you made it up to BV and glad to see a shout out to Boneshakers. You’ll have to talk to Devin or Dave V. about Vitamin B. It’s a work in progress, no maps, and beyond my skill level. But, from what I gather it might be what you are seeking out in the BV area.

Yup I’ve heard good things about Vitamin B, and talked with them about it a bit… next time I’m up that way, that’s what I’ll be riding! Just have to wait for this snow to melt off…

Heh, yeah, you can’t have many left that are within a day’s drive!

Looks like a great little system with maybe room to add more trails???

It sounds like they’re building more trails every year (the guys from the shop were going to be meeting with the BLM the next day to flag a new section of trail), but the mountain biking and trail building community in Buena Vista just isn’t as large or as engrained as it is in Salida. Whereas Salida folks built about 4 (or more) miles of brand-new singletrack last year and have 6-10 miles on the docket for this year, the trails around BV are growing at about a one mile per year rate. But there’s plenty of room for expansion!

*more of the locals I mean

I know 2 people moving to BV in June who will be involved in trail building.

So in response to Dustin’s comment, it made me curious: how many miles of new singletrack per year is Augusta putting in?

With a population that’s closer to 2,500 than it is to 3,000, BV locals are putting in an average of 1 mile of new trail per year, sometimes more. If we say that their rate is 1 mile per year per 3,000 people, then Augusta, with a metro area population of 576,000, should be building 192 miles of singletrack per year at that rate.

And then if we say that Salida is building 7 miles per year with a population of less than 6,000, at that rate Augusta should be building 672 miles of new singletrack per year.

Maybe Augusta needs to step it up… just sayin’!

@Dustin Gaddis Sounds like some of the non-locals need to volunteer more! There have been multiple trail work days around BV over the years. I’ve put in a couple myself on the Midland Hills trail system.

I think they’re making some awesome strides in the right direction, and are doing pretty well for themselves.