The Big Hole Mountains – you can get lost out there

When you look up at a mountain range and dream about traversing along its full crest, what you imagine is likely far from what you’ll experience. This is especially true with the Big Hole Mountains in Teton Valley, Idaho. Their peak elevation hardly rises above 9,000 feet. That said, deep ruts, large exposed roots, and loose dirt and rocks comprise the majority of the trail. Steep canyons jet into the mountain range from the valley floor.

The Big Hole Crest Trail itself is only about 8.5 miles, but to access it, you have a 4.5-mile climb up the South Fork of Horseshoe Canyon. This route is much preferred to ascending the Rocky Peak trail from the southern end. Rocky Peak descends from the Big Hole Crest, dropping 1,500 feet in three miles through technical, rocky singletrack. With a shuttle, this trip is only roughly 16 miles.

Last year in mid-June, I left my house in Victor via country roads and headed up Horseshoe Canyon for a 20-mile warm-up. After grabbing some extra singletrack “on the way,” I began climbing up South Fork. The climb isn’t all that bad, especially compared to what is ahead. However, after steadily climbing for 4.5 miles, I felt beat and was only getting started. From the South Fork, the route merges into the connector trail to the Crest Trail. This section has a steep hike-a-bike as well.

The Big Hole Crest (trail #217) starts at the trail junction with Canyon Creek in the clearing of an open meadow. After a long climb in the trees and along steep side hills, it’s quite refreshing! But don’t get used to this, as this peaceful meadow only lasts a couple miles. I had hoped that in the meadow I’d find a stream with all the snow still high up, but there wasn’t one. That said, I had three liters of water and no need to refill just yet.

A few miles later with only a half-liter of water left, I opted to hike up a hill to a snow field and pull “clean” snow out to put in my Platypus water bladder. Having some water to do this is crucial as you’re essentially making a slushy – add snow, shake, repeat. I made enough snow water based on the idea that I wouldn’t encounter any more streams.

Ahead was steep terrain that required me to push my bike up… and down. Some descents were so steep and loose, I couldn’t ride without my bike sliding out from underneath me. It was rather demoralizing to walk my bike downhill, knowing I would be doing the same on the way back up.

After an hour of this, I had a little bit of rideable and fun downhill and a stream crossing. Wait! A stream crossing! I was ecstatic, but felt bad for the deer I spooked who was enjoying the fresh mountain stream when I came up on it. What an awesome feeling being able to dump out two liters of snowmelt water and refilling from a delicious mountain stream.

With uplifted spirits and fresh water, I continued traversing the crest. The technical sections were not over, and I felt like I carried my bike up and down rock ledges more than I pedaled.

The beauty all around tore at me, tempting me to stop to take it all in: east across the valley the Tetons, south towards the Snake River Range, and west into the depths of the Big Holes. It’s only once you get back into these mountains do you realize the true meaning of their name.

I pushed on, actually being able to pedal as I climbed towards Red Mountain. The trail became more defined and rideable, which I was ecstatic about.

Caught up in the enjoyment of finally being able to ride uphill, I didn’t check my map at the top to ensure I was still on route. I descended the fast, rocky, awesome singletrack from Red Mountain, then began heading in a very unnatural direction. I came to a stop before dropping any further southwest and looked at a map. “No… NO!” I had descended 800 feet down in a mile. That’s a long way when you have to push your bike back up.

I learned a great lesson here besides “check your map consistently”: the lesson of logic over emotion. At this point, I had a lot of emotional charge. In fact, I considered continuing down instead of turning back–a terrible idea. Emotion can impact our decisions in the backcountry if we don’t have control over it. Luckily, I realized my only option was back up, as much as it pained me.

After hiking up a couple hundred feet in less than a half-mile, I could see where I needed to be on the next ridge over. My map showed a trail to get most of the way there. But what the map shows and reality are often two different things. I continued hiking and pushing my bike.

Atop Red Mountain, I rode back to where I should have turned east instead of continuing straight. There was no marker, cairn, or any sign of an intersection. In fact, there was no trail at all – only a large snowfield and a steep, wide trail leading off into the distance. I slid down the snow with my bike, and simultaneously hopped on my bike when I came to the dirt. There wasn’t an option of stopping with the steepness.

The trail faded out again.

It was getting late. I was sick of looking for the trail. I was sick of second guessing and retracing my steps, especially when it involved hiking up. I was done. 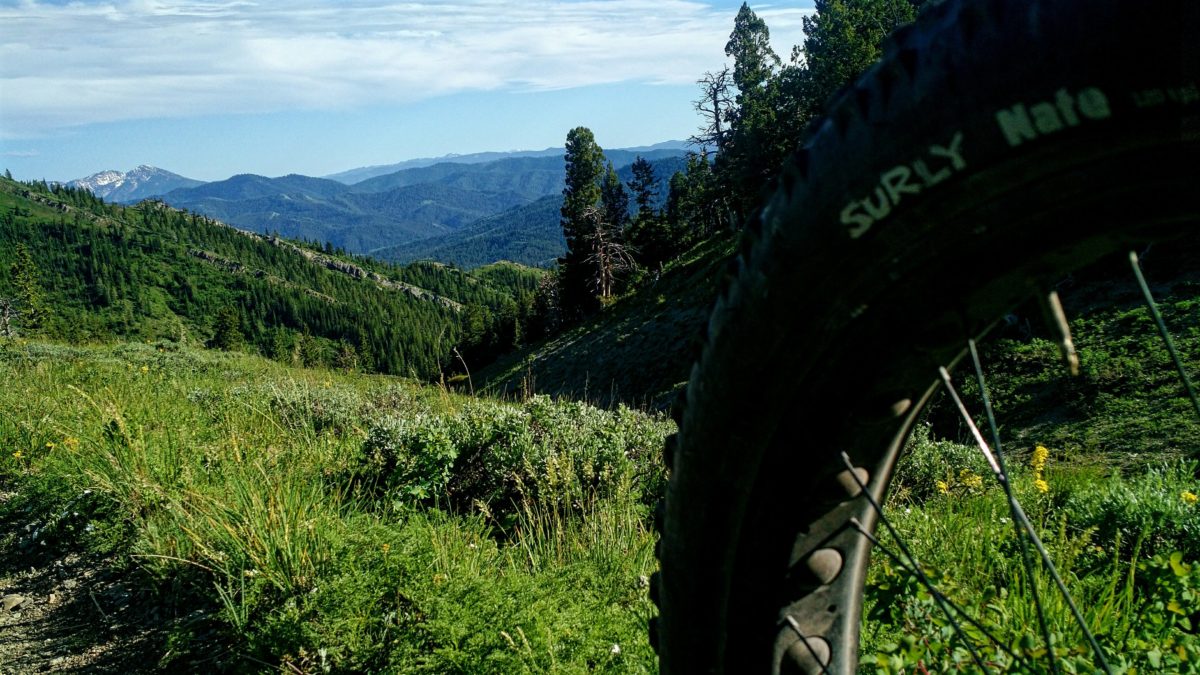 “But what are you going to do, Aaron? Are you going to just sit here forever and wait until it gets dark? You have no more food. No camping or sleeping gear. And hardly enough water. Get going!”

After overcoming my doubts and a minor “freak out session,” I composed myself and got my head back into the game. It’s unbelievable what clear thinking can do. I found the trail quickly after orienting myself. It was downhill and rideable, which was a lot more fun when I knew I was heading in the right direction.

The sun dropped soon after coming out of the trees. This was one of the most spectacular Teton sunsets I had seen – if only I could have stayed and watched.

It was close to 9pm and I had only the afterglow left. Dusk is the time that wildlife of all types come out. Moose and bear were my two big concerns. Recent news of a sow grizzly charging a local on the Grove Creek trail echoed in my mind. I knew I would be passing near the frequented area, but my goal had been to be there in the daylight. That opportunity was gone with that missed turn that cost me 1.5 hours.

I descended towards the Grove Creek intersection, shouting like an absolute maniac. My goal was to ensure no creature would want any part of this psycho coming through.

After my paranoid and final climb, I came up to the peak above Drake Creek. It was now very dark, but the moonlight helped. Looking down below, I could see the route back to my house in Victor – the highway. Given the time, I wouldn’t be connecting gravel roads to get back home.

I followed trail markers for the Rocky Peak trail, mentioned earlier. I would be descending a black diamond trail I had never ridden before… in the dark. Large, loose rocks littered the trail. In one attempt to avoid a big one, I lost control and wrecked hard into a sagebrush–at least I’ll have a cool scar from it.

I came upon what I can only think was a fisher, a rare member of the weasel family. I can’t be sure, but it wasn’t a skunk (thankfully!), nor a badger, and definitely not a porcupine.

It finally got off the trail and I was able to let the brakes go and fly down the rest of the trail. The end kicked me right out at the bottom of Pine Creek Pass on Highway 31 for a 4.5-mile spin back–glad I brought my lights!

Only recently have I considered riding this trail again. For a long time, I swore to myself that I would never bike the Big Hole Crest again. For some people, the Crest Trail is one of those “once a year, to say you did it” type of rides. For others, it’s a trail they use to connect to more backcountry in the Big Holes. This route would make for a great bikepacking overnighter. There are some Grand views of the Tetons along the Crest that would make for incredible sunrises to wake up to. For those looking to test themselves on all levels, this trail is one for the books!