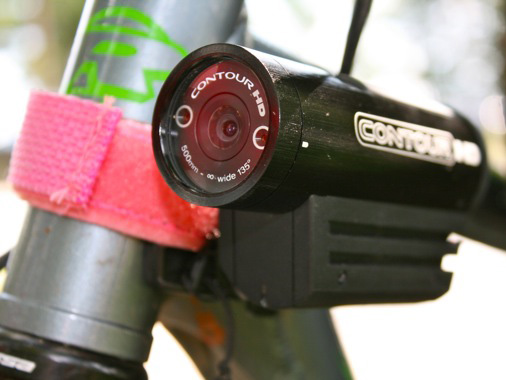 You know what they say: VOIDH (video or it didn’t happen). According to that logic most of us have never actually ridden a mountain bike but that can change with the VholdR ContourHD helmet camera. If you’ve been thinking about getting a helmet camera for mountain biking, this is the one to get.

First off, let’s talk video quality. The VholdR shoots in two modes: high def (720p HD) at 30 frames per second or standard definition (SD) at a scorching 60 frames per second. In HD mode you’ll get a wider shot and better detail while SD mode saves memory and is better at capturing fast motion shots. I found the color and lighting to be comparable between HD and SD modes and for most online video applications either one looks crisp and clear on screen. The camera automatically compensates for changing lighting conditions (moving from shade to sun, for example) and quickly adjusts the shot accordingly (though not instantly).

The VholdR makes use of a wide angle lens capable of capturing 135 degrees of action (90 degrees in SD mode). That translates into a field of view about halfway between staring straight ahead and full peripheral vision which means videos look realistic and don’t have the “tunnel vision” effect you may have noticed with other cameras.

If you’ve used a helmet camera before you know that sighting the camera can be difficult, especially since most cameras are too small to include an LCD screen for previewing clips on the trail. VholdR takes a unique approach to this problem and includes “laser sighting” in the Contour HD. Press the power button and two lasers mounted beside the lens show you where the camera is aimed and how the shot is aligned horizontally. If you need to make adjustments the Contour HD lens rotates 90 degrees to the left or right and the camera orients the video automatically. The rotating lens enables you to mount this camera pretty much anywhere and at any angle!

Aside from video quality, the endless possibilities for mounting the Contour HD are what really make this camera shine. VholdR includes a “flat surface mount” and “goggle mount” with the Contour HD but if you want to rock the camera on your vented helmet you may want to invest in the optional “vented helmet mount” ($19.99). The flat surface mount uses a removable adhesive pad to stick to any flat surface (like a non-vented helmet or bike frame) but I found the goggle mount paired with a Simple Strap worked just fine for bike frame and helmet mounting.

After experimenting with multiple camera angles and mounting positions I found my favorite to be the steering tube mount. The Contour HD is lightweight – about 5 ounces with mounting hardware – but it still felt a little annoying on my helmet, especially on rocky trail sections. I assumed the helmet shots would be more stable than the bike mounted shots thanks to my neck acting as a shock absorber but that actually wasn’t the case. In both cases the shots came out smooth and with very little shaking (though mounting the camera on a FS bike works better than a hardtail). Even if your shots do end up a little bouncy (some of mine did because I didn’t clip the camera to the mount securely on one ride) you can use software like iMovie to stabilize clips in post-production. 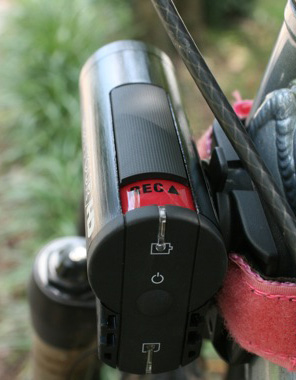 In terms of on-trail operation, the VholdR couldn’t be easier to use. There are basically just two controls on the camera body: the power button and the record slider (the HD/SD mode button is concealed behind a sliding panel). Hold down the power button to turn the unit on and wait for the audible beep and green light to signal the camera is ready. Flip the slider into “record” and you’re on the air with virtually zero lag time. A red light on the front of the camera lets you and your on screen talent know you’re rolling – a nice feature that some other cams we’ve tested left out. The controls are large enough that you can work them with gloved hands and you can easily find them by feel when the camera is mounted in awkward positions (like on top of your head!).

The included rechargeable battery seems to last forever and unless you’re planning to record an entire epic ride you probably won’t bump into the 3 hour limit (you can buy extra batteries if you do). The included 2Gb MicroSD card holds 1 hour of HD video and 2 hours of SD action, though you can pop in cards up to 16Gb for a whopping 8 hour HD video capacity. Still not enough? Just pack extra memory cards and batteries and you can shoot for days! Some cameras we’ve used have problems with shaky battery connections that cause the camera to power down in the middle of a shot but the ContourHD was 100% reliable in our tests.

Audio is captured via an internal microphone and is encoded using AAC compression (the same format used by Apple’s iTunes music store). All the helmet cameras we’ve tested have problems with wind noise, especially bombing down fast trails, but the ContourHD does a good job filtering out the static. At moderate speeds voices were clear and audible while at high speeds the wind noise rarely overpowered the sounds of tires crunching dirt.

The ContourHD comes with simple software to import videos from your camera and upload them to vholdr.com where you can also view thousands of action sports videos. Editing tools are limited to clipping but the app makes it easy to tag and organize helmet cam footage on your Mac or PC. The ContourHD saves videos in Quicktime format (.mov) which makes it simple to import videos into other video editing programs like iMovie (my personal fave).

As you can probably tell I love this camera and it’s earned a permanent spot in my Camelbak whenever I go out for a ride. With incredible video quality, endless mounting possibilities, and dead simple controls, the VholdR ContourHD is the best helmet camera I’ve seen for mountain biking. For less than $300 you can pick one up at REI and start sharing your rides (and your sick moves!) with the world.

So this isn’t being repackaged and given away in the contest?

Very nice, one of these or similar is on my ‘list’. But just like a lot of these technologies, the GPS, video and even my still photography, the different file types, user software and all the other variables for working with your stuff is all pretty overwhelming. I keep hoping to find a simple, easy to read explanation of video types and useages but nothing so far-

Compared to GPS, video is super simple – just point and shoot! I use a Mac and when I plug in the VholdR it automatically imports my videos into iPhoto – no extra software necessary. Most video sites like YouTube support dozens of video formats so that’s not really an issue either (unlike GPS where every manufacturer has their own proprietary file type).

Once you get into video editing, things can certainly get complicated but it’s not a requirement. Most of the videos I’ve seen on VholdR.com are straight from the camera.

I have ran into issues with different formats and whats compatable, Im learning a bit more about it as I go. Id like to find a format that works with the standard editing software and also fiind a camera that will save it in the same format as my Canon Powershot, it doesnt take great video but sufficient and with two different camera angles it would be possible to put together some great trail shots.
I plan to read up on this camera more as it seems to be fairly affordable which is also an issue as we tend to spend most of our money on things with tires!
Thanks for the review here.

I just ordered one of these, amazon was having a sale for $70 off for the 720p version so i decided to take the plunge. This article was also one of the reasons i decided on this over the gopro hero. I was wondering how you mounted the camera with the simple strap?

The included goggle mount will accept the simple strap, though it is a bit of a tight fit. The last photo pretty much shows how it’s done.

Thanks! Ill have to mess around with it when both my camera and the simple strap show up.