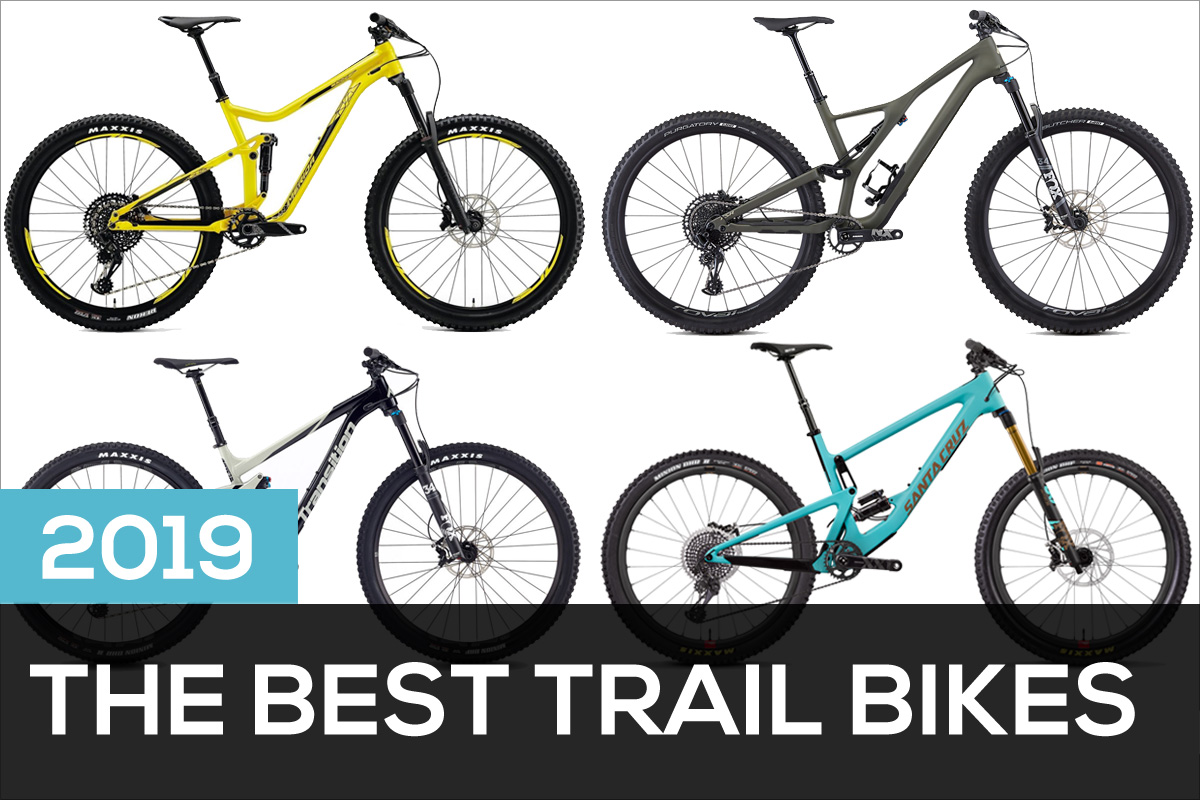 Ahhh, another year of new mountain bikes is in the books. And 2018 delivered some interesting insight as to where trail bikes are headed.

If you missed our look into where trail bike geometry has gone and might be going, catch up here.

Angles have continued to get longer and slacker, but have reached an appreciable point on trail bikes. Now the averages are where enduro bikes started a few years ago.

Today, trail bikes feature an average head angle of 66.5-degrees and a seat tube angle between 74 and 75-degrees. Most have somewhere between 130-160mm of travel, although 130-140mm seems to be the average.

With suspension designs more capable than ever, trail bikes have become pretty dang sweet. Here are a few of our favorite new and updated models from this year.

Esker is a completely new brand to the industry for 2018, but showed up with plenty of experience. The company launched with two models: a hardtail called the Hayduke, which came from a previous brand, Advocate Cycles, and the Elkat, a trail bike with a Dave Weagle designed suspension platform.

The Elkat is a carbon fiber, 150mm travel, 27.5-inch trail bike that uses Weagle’s Orion suspension design, making it the first mountain bike to do so.

Another thing that caught our eye about the Elkat is the price. A base-level build with a Shimano SLX drivetrain, a Race Face dropper post, DT Swiss wheels, and Fox suspension is $4,000. Esker also gives buyers the option to add on more premium components individually without leveling up to a higher tier build. That’s not something many brands offer. 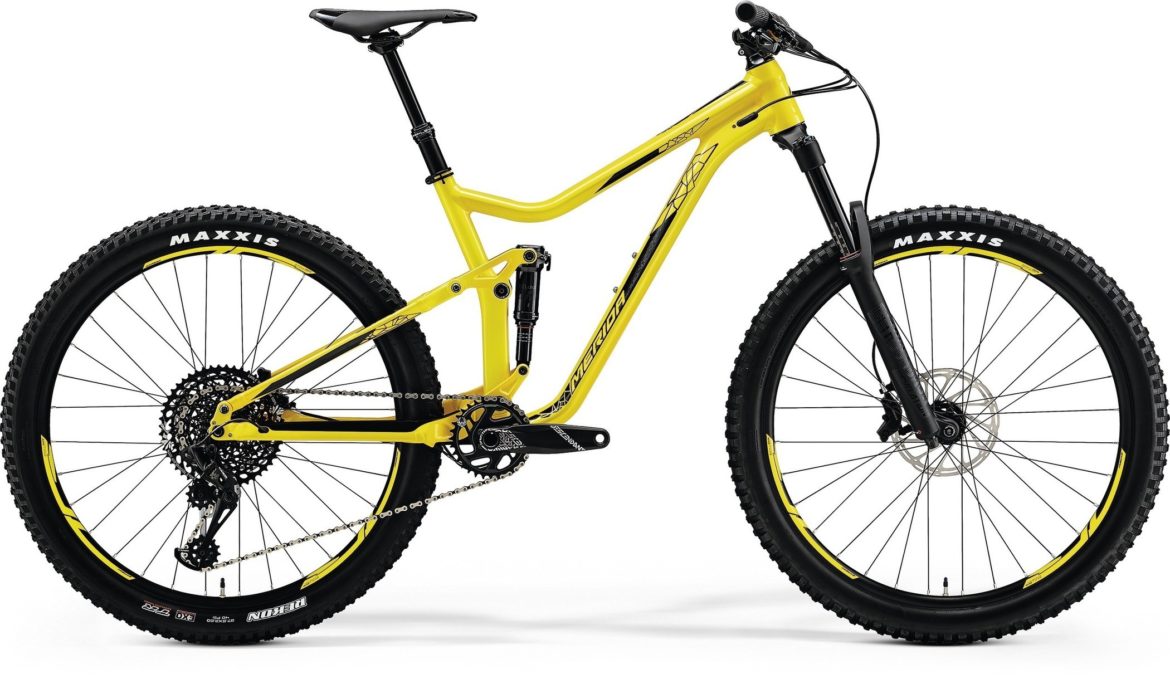 Americans are likely wondering who or what Merida is. The Merida One-Forty is currently only for sale in the European market, and has become a favorite overseas.

The brand started in 1972 to prove that good, quality manufacturing can take place in Taiwan. Today, they still produce in Taiwan but have research and development headquartered in Germany.

Modern geometry sees the One-Forty with a 75-degree seat angle and a 66.3-degree head angle in a hydro-formed aluminum frame.

The lineup seems to be dedicated to lowering the barrier of entry to buying a mountain bike. Their top-of-the-line One-Forty 900 has SRAM Guide R brakes, a GX Eagle drivetrain, and FSA Gradient wheels. It weighs a touch over 30 pounds, and sells for 4,000 euros (about $4,500 USD).

“It’s an affordable aluminum bike with a nice build spec that won’t leave most folks immediately wishing for upgrades,” says Singletracks writer Brian Gerow about the One Forty.

Specialized debuted the new Stumpjumper this year with quite a bang. It’s an all new frame design and this time, without proprietary suspension components. On top of that, the Stumpy can be had in carbon or aluminum, with 27.5- or 29-inch wheels, a short travel version with 120mm rear/130mm front travel, and a longer-travel package with 150mm of front and rear travel. To sum it up, the bike has a lot of options.

The Stumpjumper also debuted with a piece of marketing gold in the form of a video about the new bike during the launch.

Jeff Barber had a chance to ride the Stumpjumper Expert on a trip to Idaho over the summer. He found it to climb well, with a surprising amount of agility through tight switchbacks. The suspension works through big hits on the descents while maintaining a very quiet and laterally stiff ride. Read more here.

Santa Cruz also dropped another highly-anticipated update this year to its aggressive trail-slash-enduro bike, the Bronson. The brand also revised its XC bike the Blur, and its trail bike the 5010.

Last year, the Santa Cruz Nomad saw a big update with a notable rear shock move that was inspired by the V10 downhill bike. This then inspired the rear shock move on the Bronson. It brings the center of gravity lower for better weight distribution, and is said to improve small bump compliance and suspension performance overall.

The geometry is quite aggressive for the group with a 65.1-65.4-degree head angle, but with a more modern seat angle, above 75-degrees in both modes.

Santa Cruz is undoubtedly one of the most popular brands on the trails these days and to accommodate all riders, they have a wide range in pricing on the Bronson. A base aluminum model starts at $3,500 and a CC carbon model tops out at $9,500 with Reserve wheels.

Transition Smuggler: All the fun you need

Transition is one of the most fun MTB brands to watch. They make bikes that riders want, and while they always have bikes that fit in with current industry trends, they poke a little fun at the trends along the way.

A carbon version of this capable 29er trail bike, the Smuggler, dropped this year. The bike got lighter, a little stiffer, and a little sexier than the aluminum version.

The carbon Smuggler still has the same geo numbers as the aluminum version. The rear travel is a short, but capable 120mm, and a 140mm fork handles everything up front. The head angle is at 66-degrees across the board, and the seat angle starts at 77-degrees for a size small and ranges to 75.3-degree for an XL bike. 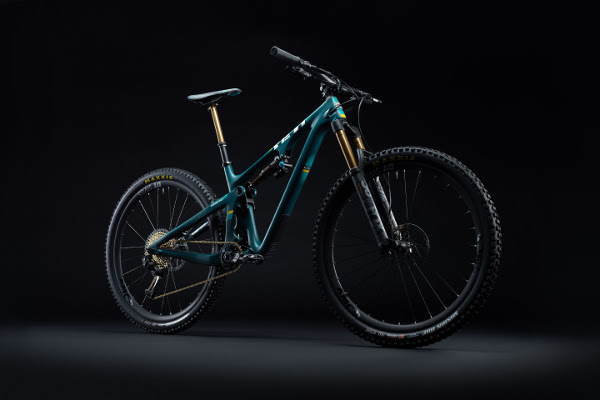 It was a surprising move by Yeti to axe the popular SB4.5 in favor of an all-new flavor, the SB130. It’s also interesting to see the brand move away from standard measurements in the bike titles and move to the metric system.

The SB130 gets a slight bump in travel by 5mm compared to the SB4.5, and a big step up to a 150mm travel fork and a definite change in geometry.

It pushes modern geometry farther than others in the bunch with a 77-degree seat angle and an aggressive 65.5-degree head angle.

Yeti is positioned as a high-end brand though, and doesn’t offer as great a deal on an entry-level bike as other brands on the list, so buyers will need to fork out a little bit more coin. A SRAM GX-specced SB130 starts at $5,200 and a SRAM XX1-equipped model tops out at $9,200. See the builds here.

Buy the Yeti SB130 at Backcountry.com

Trailbikes are so much better now than even a few years ago. Suspension systems have gotten so good that almost every brand makes a decent bike. Almost any Trailbike that comes with i30-35mm (i=inner width) rims, 2.4-2.8in tires, and at least 5in (130mm) travel is probably going to be great. Picking a best Trailbike is mostly about splitting hairs. Trail riders have never had so many choices— nearly all of them good!

That makes sense, it’s definitely an offset to their previous offering, but seems like the SB100 replaced their old 100mm XC bike, the ASR which isn’t in their lineup anymore either.

No mention of the Devinci Django?

David, for this one we tried to focus on bikes that were released or re-designed for 2019 and the current Django platform is a few years old. But, maybe we’ll see something new for next year since they got the Spartan 29 and Troy out of the way this year 🙂

So where is the Devinci Troy 29er, best bike I have ever rode and I previously rode Santa Cruz and Pivot bikes.

So, by aggressive, you mean the slackest head angle?
The geometry is quite aggressive for the group with a 65.1-65.4-degree head angle…

No cannondale habit? All new and definitely fits the bill for this bike category. It’s a fantastic new 29er trail bike!

Thank you. Curious why you went with Santa Cruz Bronson and not the Hightower?