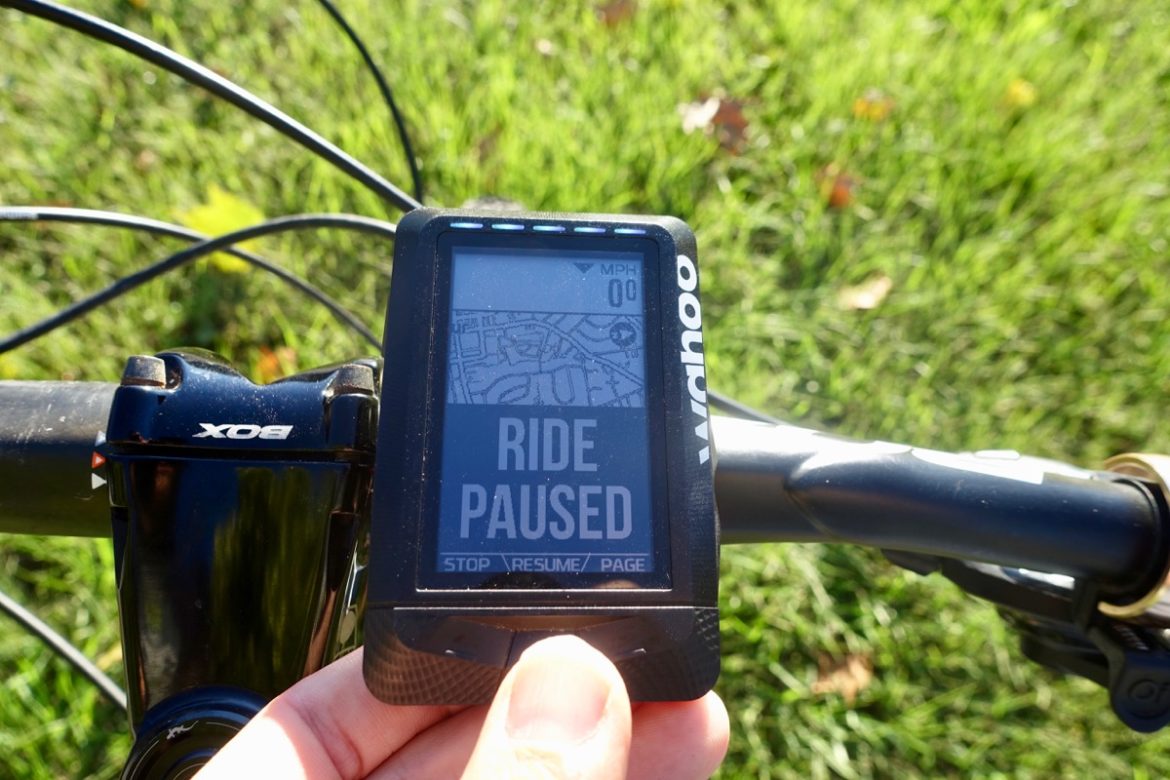 It’s hard to believe, but people have been using GPS devices to navigate and track mountain bike ride stats for almost twenty years. In that time, devices have become more advanced and complex, with many devices beginning to look and act more like smartphones than cycling computers.

Wahoo is a fairly new entrant into this market, releasing the Elemnt in 2015, yet they’ve taken a decidedly different approach. 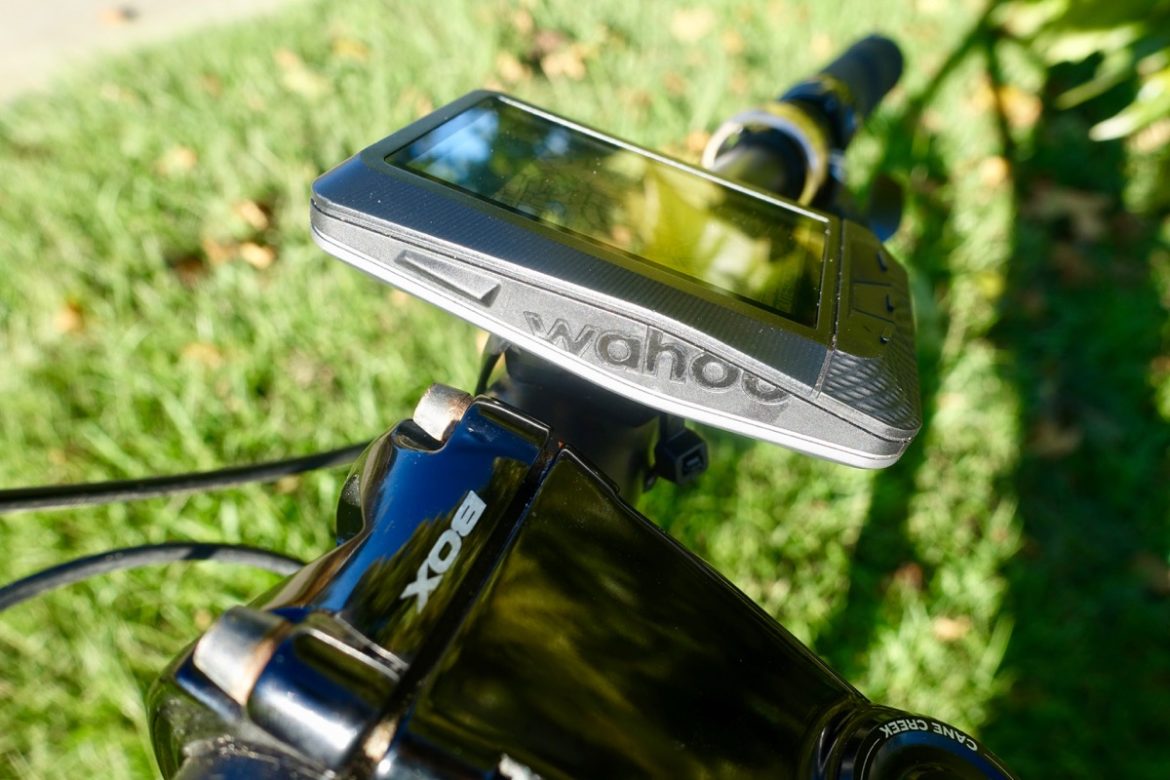 Looking at the Elemnt, there doesn’t seem to be a whole lot going on. It’s a black and gray rectangle with a 2.7″ monochrome LCD screen that resembles an oversized cycling computer from the 90s. And no, the device doesn’t have a touch screen either.

Thanks in part to the fact that it doesn’t have a fancy screen, the Elemnt is rugged and designed for being used out in the, well, elements. At 105g (99g claimed) it’s lightweight and I found it easy to mount using the included hardware. Once mounted, the device stays secure on the trail.

The Elemnt is controlled using six buttons — three on the front, one on the left, and two on right. The buttons each have a nice angular, raised peak on top, making them easy to feel even through gloves. That’s a good thing, because the black buttons blend into the GPS body, making them hard to see, especially at a glance. Good tactile feedback indicates when you’ve pressed hard enough.

Powering up the Elemnt for the first time makes it clear this is not some piece of hipster retro-tech. The screen displays a QR code which the user scans with the free Wahoo! companion app to set up the device. Almost all of the settings are configured within the smartphone app itself, saving users the agony of navigating deep menus and inputting data through endless button clicks.

Once the Elemnt is connected to the smartphone app, hidden features begin to reveal themselves. A press of one of the five buttons lights up the display with a backlight that’s helpful for using the GPS in low-light conditions. Cycle through the display screen (“pages” in Wahoo parlance) and a series of bright blue LEDs above the LCD screen light up to indicate where you are in the sequence of pages.

Those LEDs turn out to be particularly useful for mountain bikers who usually can’t be bothered to focus on a shaky screen while trying to avoid trees. By default, a strip of vertical LEDs indicate how the rider’s current speed compares to the running average for the ride. Dipping lights goad the rider to pick up the pace, while ascending lights are like a mini dopamine reward for pushing harder.

In navigation mode, when following turn-by-turn directions, the LEDs indicate the direction of upcoming turns. Again, no one (road riders included) wants to be staring at a tiny screen trying to see the next turn, and the Wahoo solution puts the info riders need right in their peripheral vision. When connected to a premium Strava account, the LEDs can even be configured to alert the rider to an upcoming Live Segment.

Once set up, the Wahoo Elemnt doesn’t ever need to be plugged into a computer. Ride data is sync’d to the app automatically, though honestly I’m not 100% sure I understand how this works. Does it go through my phone? Over my home Wi-fi? To me, this is one of the things that makes the Wahoo better than many of the other devices I’ve used over the years. It just works, and I don’t have to wade through software, manuals, or online forums to figure it out.

Wahoo has partnered with a number of app providers like Strava to make use of Wahoo data. Users can select which apps they’d like to connect, and then data flows automatically after each ride. There are even navigation app providers that make it possible to import data, like routes, to the device.

When connected to the Wahoo smartphone app, it’s possible to have text messages delivered to and displayed on the device. I can hear the collective groan coming from those who ride to get away from it all, and I hear you. However, I can say I’ve found this feature to be pretty useful on group rides when folks get separated or happen to be running late. By default the messages disappear a little too quickly in my opinion, especially on the trail when I can’t look down right away. Luckily the messages remain accessible with a couple button clicks.

One interesting, albeit slightly creepy, feature is the ability to see other Wahoo users on a local map. Again, this is a useful feature on group rides when everyone is trying to link up, though I’ve found rider locations are not always accurate or up to date in real time. It’s possible to opt out of this so randos don’t show up on your map (and you don’t show up on theirs!) but so far I’ve found the feature to be mostly harmless and moderately useful.

Of course the Elemnt can be paired with all sorts of external devices and sensors like heart rate monitors, power meters, etc. The GPS has ANT+, Bluetooth LE, and Wi-Fi capabilities.

The Wahoo Elemnt ships with built-in road maps that are fairly detailed, in many cases even showing cycling paths. The maps make use of data from Open Street maps so coverage is generally good. However, road names aren’t displayed unless you’re following a navigation route you created ahead of time in the app. 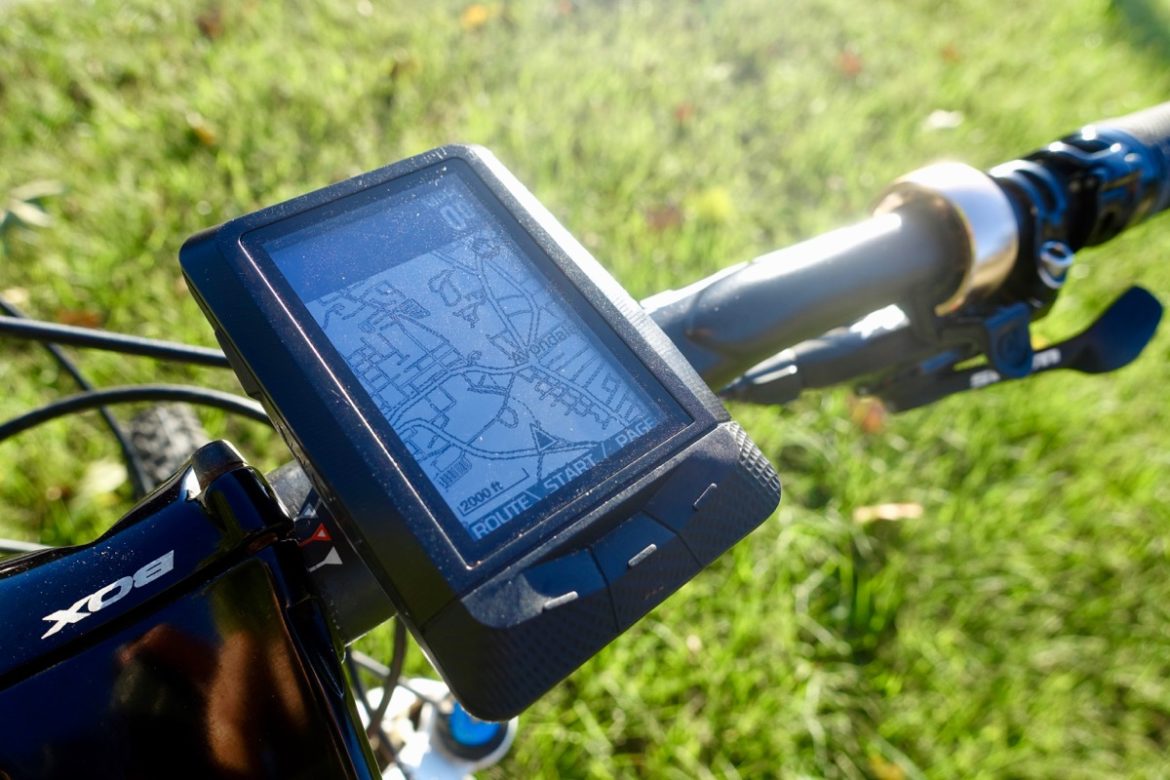 For map viewing, I find the screen to be a little too small and not quite contrasty enough. Admittedly, this is mostly a case of “you’re doing it wrong” in that the preferred way to navigate is to have a pre-planned, turn-by-turn route loaded. Not only that, navigation is but a nice add-on to the main focus which is displaying ride data like speed, distance, elevation, etc. For that, the display can be configured to show just the stats the riders cares about in a big, bold font. 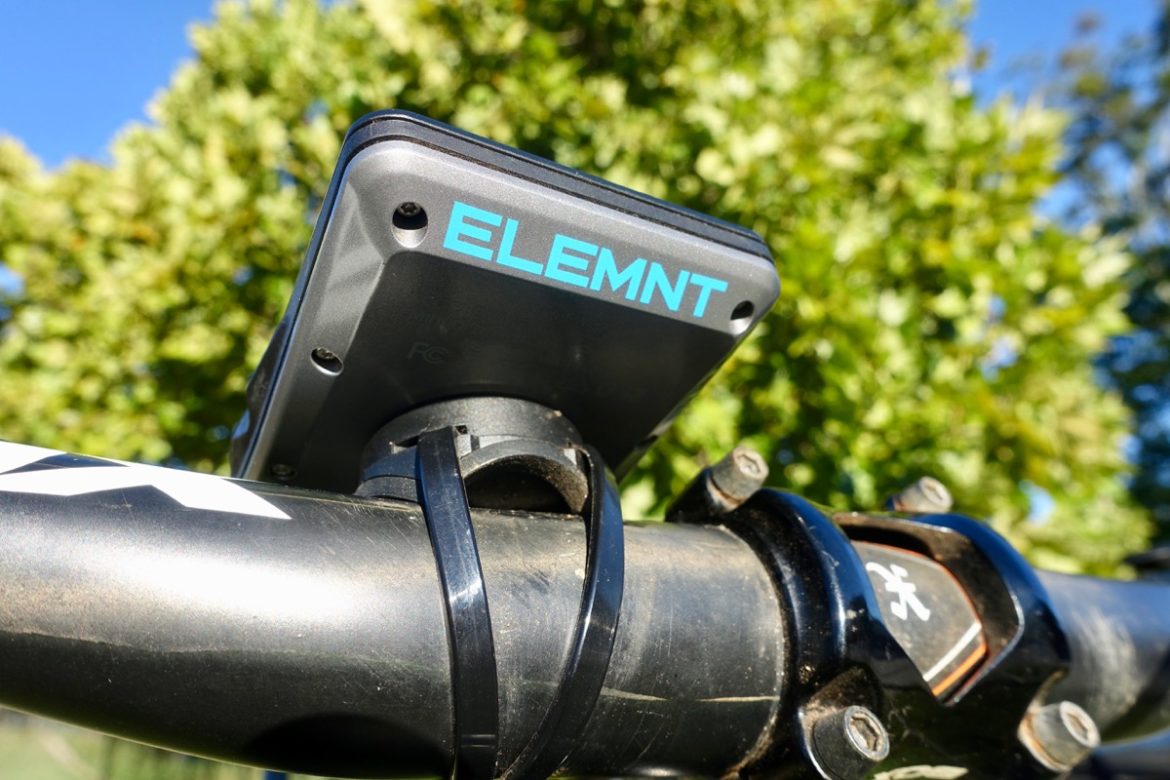 I’ve been mountain biking with a GPS unit since 2001, and over the years I’ve tried (unsuccessfully many times) to help friends figure out how to use their new devices. Everything from configuration to getting data on and off the device used to be complicated. Fortunately, Wahoo seems to have dummy-proofed the Elemnt.

For example, how many times have you gone for a ride only to realize halfway through (or worse, at the end) that you forgot to press start? Well, the Elemnt feels your pain, and it gives you a little beep and an LED wink if it senses you’re beginning a ride but haven’t actually started the clock.

The only place I’ve been tripped up so far is in the charging department. First, I’d like to point out the Elemnt sends a notification to your smartphone reminding you to charge it when the battery gets low. Again, been there, done that with forgetting to charge my GPS before the next ride.

The confusing part is what the Elemnt displays when it’s actually being charged. If the battery is run way down (like, dead) and then plugged in, a sad face appears which looks like death. I assumed this meant the unit was cooked or something, but a quick online search revealed this just means your battery was really low when you finally decided to charge it. Helpful? Not really. Confusing/worrying? Yes.

Once the device is plugged in and is charging, the display goes to sleep and doesn’t give any indication the GPS is still being charged, nor is there a blinky LED to let you know the device is getting a fill up. This tripped me up a couple times because I assumed the device was being charged, when it actually wasn’t due to an incompatible USB cable I was using.

One of my favorites

I’ve used a lot of GPS devices over the years, and I have to say the Wahoo Elemnt is easily one of my favorites. It’s simple to use, yet powerful, and its capabilities are easily extendable thanks to its ability to pair with partner apps.

Thanks to Wahoo for providing the Elemnt for review.

Does this work with both iOS and Android OS?

Thanks for the review. I might have missed it… how many hours of riding did get on a full charge?

Good question. Wahoo! says up to 17 hours on one charge, but I generally got about three, 4-hour rides per charge. So, about 12 hours.

Great review, have to agree with every point you make! My Wahoo Bolt has been flawless over the last thousand plus miles. The battery life is awesome, the data is very accurate, the amount of settings are great, the iOS app/bluetooth Strava sync feature is so easy, and it never acts up on a ride. Even live segments work quite well. Compared to my Garmins this thing is gold–I will never get another Garmin.

I love the Wahoo Elemnt, I’ve had it since it’s release. It’s full-featured, and the screen is really readable in nearly any light condition. It mostly just works and doesn’t bog me down in menus.

My only issue is attempting to navigate an off-road route without turn by turn prompts in smaller parks where the route may have to criss-cross or overlap for sections. It’s confusing as to which way you should continue when you reach an intersection where two parts of the track meet or continue together. I don’t find pulling out the app to be super helpful, and often have to load RWGPS or STRAVA to find the original route to view the route and see where it’s intended to go.

Can you navigate using Trail forks?

I wouldn’t. I prefer Singletracks. 🙂

Seriously, tho, you can load GPX tracks from anywhere and follow the route.

Having a many-year legacy with Garmin Connect, I am concerned: can the Wahoo data be downloaded into Connect?

They do not have direct integration with Garmin connect, I don’t think Garmin was keen on other device manufacturers/competitors using their web services. I think this actually was a feature (sync with Garmin connect) which was discontinued shortly after the Elemnt began rising in popularity.

I’ve heard there are also some issues with Garmin connect accepting .fit files created on the wahoo Element, so I wouldn’t rely on good cross-compatibility between Wahoo and Garmin.