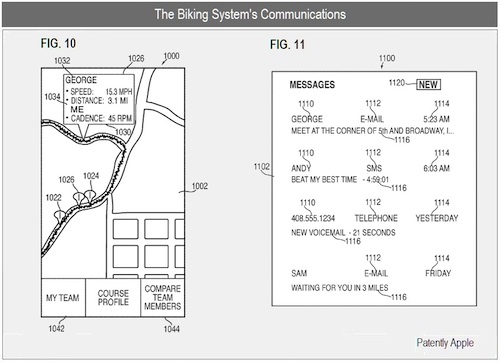 MacRumors reports on a recent patent application filed by Apple Computer related to a bike “super-computer” that could run on the iPhone and/or iPod. While many of the features mentioned aren’t groundbreaking (speed, cadence, heart rate, GPS routing, among others), there are a few interesting ideas worth mentioning.

We don’t know of an existing sensor that records bike derailleur settings but it’s not too hard to imagine placing a transmitter in the shifters to keep track of gear ratios. Like the Nike+iPod system for running shoes, the sensor would need to be purchased separately or integrated into the shifters before purchase.

This feature set has the potential to be a game changer, particularly in the world of competitive road cycling where team members are in constant communication with one another. One of the drawings submitted with the patent application shows a map with pins for each rider in a group, along with speed and cadence information for each rider. An obvious extension of this would be to show an estimate of how long it will take to catch a leading rider or to route lost riders back to their group.

Many of the communication functions discussed in the Apple patent seem geared toward the recreational rider including the ability to rate and recommend routes. Riders could also share their ride characteristics (i.e. how fast they are) to assist in forming group rides. In some ways it seems like this might be overkill but remember, this is just a patent application and not necessarily an actual product being developed.

The Apple patent also mentions the potential to track things like wind speed and weather which is interesting but seems useful for only the most serious riders. Besides, we’re imagining one of those spinning weather vanes with cup paddles on the handlebars – not very aero. Perhaps Apple has a more elegant solution involving pulling data from the National Weather Service based on time and location data along the ride. Of course there is such a thing as too much data and the real challenge will be building an interface that makes sense of all the information.

What About Mountain Bikes?

Most of the features listed here sound pretty roadie-centric which is probably a good idea since cyclists are more likely to have cell service on the pavement than on the dirt. And mounting a pricey iPhone on mountain bike handlebars is a risk many riders aren’t willing to take (stuffing the phone in a jersey pocket works but then you can’t see the screen to make use of all the cool features). 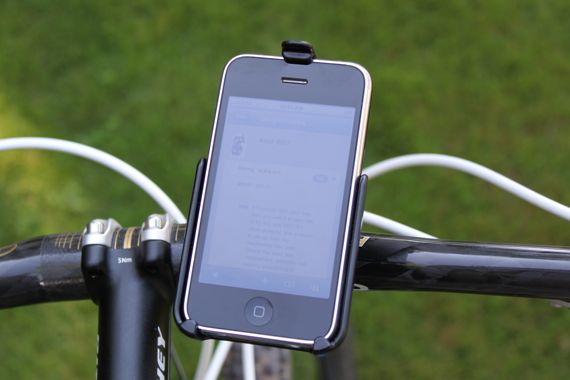 Assuming these hurdles could be overcome, we’d love to see a resurrection of our “virtual mountain bike race” concept from several years back. Basically the idea is to use the GPS features to conduct a time trial on a set course and to track the best times online. Then there’s also the whole mapping component – take track data from dozens of riders on a trail network and average the data to produce accurate trail maps. Hey Apple, if you wanna add this stuff to your patent app, let’s talk. 🙂

Cool idea but why bother to patent it? Its not like the idea itself is novel … I’ve heard people talking about this and even implementing ideas like it for years now. Prior art exists so they will not get this patent. And good thing too .. its an awesome idea since many of carry around our phone anyway. If I had to buy a iPhone just to have that functionality, that would be evil.

I would be excited if the iphone GPS actually worked in the backcountry. It’s disappointing that I can’t find one decent backcountry app. Don’t be surprised if you have to ride “apple approved” trails to use the program haha.

Bruce on the Loose

@mtb83201: I use MotionX GPS on my iphone, you can precache map data so when in an area without 3G service your GPS is still fully functional. The app has specific Bike settings, and does all the lovely features like tracking distance traveled, time (with autopause), altitude, etc and has options to share your data via gps data export or google maps links to email, facebook, etc. (How’s that for a run-on sentence. LOL)

Battery will crap out in 2 hours.