To be clear, there was nothing wrong with my wheels. I’ve been riding Industry Nine’s aluminum Trail 245’s since I built my bike in early 2017, and they’ve left little to be desired. Of course, if you’ve paid any attention to the bike industry for the past decade, you know that two-year-old products could very well appear on the Antiques Roadshow.

In January 2018, i9 replaced the Trail 245 model (24.5mm wide rim) with the Trail 270 (27mm wide), reflecting the industry trend toward a wider, stiffer rim that could accommodate wider, higher-volume tires. I felt a little left behind with my 2.3” tires, but I took solace in the fact that my Torch hub with its 3-degree engagement was virtually future-proof.

Then, this past February, the engineers at i9 threw another proverbial wrench in my spokes with the debut of Hydra. The Hydra hub promises 0.52-degree engagement along with other benefits such as reduced drag and improved durability. The nerve. Fortunately, this further lowered the resale value of my bike. Why is that a good thing? I’m glad you asked.

If you’re like me, you’re all too familiar with the mental gymnastics required to justify certain purchases for your bike addiction. Techniques vary, but my current favorite centers around resale value. Let’s imagine I’m looking to sell my trail bike. It’s a carbon frame with a 1×12 drivetrain and mostly excellent components, but there are a few glaring areas that need to be updated in order to get the most out of the sale. Never mind the fact that I have no intention of selling my bike. That’s not the point. The point is to be ready for that day when it never arrives.

I try not to buy into new product hype without experiencing it myself, which meant I needed a chance to ride some new, Hydra-equipped wheels and decide if my old set deserved an update. Lucky for me, i9 is five minutes away, and they were willing to give me that chance.

To illuminate the cryptic naming convention, “Enduro” means they’re designed for the demands of enduro, the 310 denotes an internal rim width of 31mm, and the “c” stands for costly. I mean, carbon. If you’re more into rocking metal and making sound financial decisions, there are two Enduro 305 models to choose from: the 32-spoke version features aluminum spokes in those 11 striking anodization options, and a budget-friendly Enduro S model comes only in black and uses steel spokes. I rode the 310c, so I’ll focus on that set, but I’ll include the key specs of the other options.

There’s both a 24- and 32-spoke model of the Enduro 310c. Because I weigh less than 170lbs. climbing out of a pool in full riding gear, the 32-spoke version with its 260lb weight limit would definitely be overkill. I was in luck, as a set of 24-spoke wheels had just come back from a tester. I would only have an hour in the parking lot to try out the goods, so I had to form impressions fast.

Just kidding. Over the last three months, I’ve smashed 500 miles on these wheels, 280 of which were spent racing through Pisgah’s finest singletrack gnar. I’ve run perilously low air pressures searching for grip during torrential downpours, and I’ve bombed burly descents completely exhausted, not so much choosing lines as hanging on for dear life. I’ve also crashed quite a few times at speeds ranging from forgot-to-unclip slow to what-am-I-doing-on-the-ground fast. The 310’s took this abuse without the slightest complaint, and they’re as true today as when we first met. Durability is what you expect out of a $2,400 set of wheels, but it’s worth mentioning because of the extent of the testing. Trust me – I was thorough.

I9’s new Hydra hub was one of many reasons I was excited to test these wheels. Toward the tail end of winter, I went from my own Torch hub with 3-degree engagement increments to a test bike with a disappointing 10 degrees between engagements. Although that bike was amazing, I was a little let down by the delay between pedaling and response. It also made the eventual leap to Hydra’s .52-degree engagement even more profound.

The Hydra hub responds almost instantaneously to rider input, improving the experience no matter what kind of riding you’re doing. Whether you’re challenging yourself on a technical climb or just ratcheting across a creek to try and keep your feet dry, rapid engagement makes you feel more connected to your bike in the same way a better fitting boot connects you to your skis. So how do they accomplish such low engagement?

I9’s old Torch hubs relied on a 60-tooth drive ring and six pawls. That would yield six degrees between engagements using all pawls simultaneously, but half of them were set out of phase by three degrees, cutting that six-degree engagement in half. Hydra also uses six pawls, but that’s about where the similarity ends. Hydra features a 115-tooth drive ring and puts each pawl in its own independent phase. In other words, just one tiny pawl clicks into place when you pedal – until more are needed.

Each pawl is set out of phase by about the width of a piece of paper from the one preceding it, which is what makes the magic happen. When you put the pedal down, even the stiffest hubs will flex, and it’s this flex that engages the second pawl. And the third. And maybe the fourth if you’ve got some diesel legs. The original Hydra was a mythical three-headed dragon where two heads would grow back for each one removed. With the Hydra hub, the more torque you exert, the more pawls join in to gobble up the load exerted. Because i9 deliberately engineered a specific amount of flex into their hubs, and this system for bracing progressively harder against it, they claim the design offers improved bearing life and decreased drag.

Hydra has another, perhaps superficial, advantage over Torch hubs. If you don’t want your hubs to sound like a swarm of angry African killer bees, the small teeth of Hydra make the sound more tunable. Use light oil if you like them loud and proud, or choose a heavier grease to smother that glorious buzz and sneak up on people in relative silence. The Hydra hub is a home run in my opinion, and it’s spec’d on pretty much the entire range of i9’s mountain wheels. I set out to determine if the rest of the Enduro 310c package could justify the price tag.

Just looking at the numbers, it would be easy to mistake the 24-spoke 310c as the lighter option of i9’s carbon Enduro wheelsets. In reality, it’s the only option for lighter riders. Instead of getting my cage rattled by the stiffness of 32 spokes and a 31-36mm wide carbon hoop, I got a wheel that had every bit of stiffness and performance I wanted, but that was still comfortable and compliant enough to send all day.

The 24-hole 310c was excellent at tracking the ground and goes right where you point it, but you also won’t get bucked off your ride if you make a mistake and point the front wheel somewhere dumb. The stiffness and support are most noticeable ripping corners, where more flexible aluminum wheels can tend to feel vague and loose. At the same time, the 310c wheels allow you to tackle tough rock gardens at speed without getting vibrated off the bike.

Part of the fantastic trail feel undoubtedly stems from the wide rim. With a 31mm internal width, riders gain the freedom to run wider tires at lower pressures, and the Reynolds carbon easily shrugs off the occasional rim strike.

It’s true that weight reduction is an additional benefit of removing eight supports, and the 24-spoke version of the Enduro 310c comes in at a feathery 1590 grams in 27.5” and 1650 grams for 29″ wheels. It’s not the lightest wheelset around, but it might be the lightest one that does double duty as a wrecking ball. 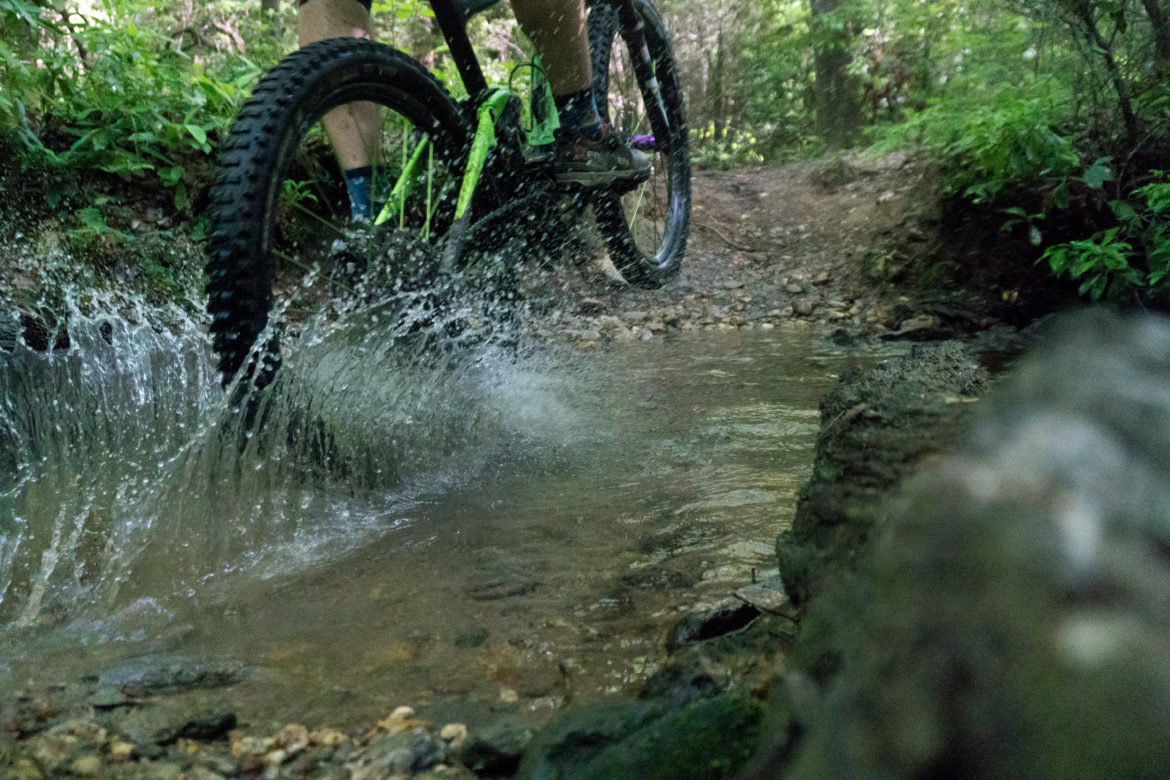 The 24-spoke Enduro 310c is a top-of-the-line wheelset that gives riders a seemingly paradoxical blend of precise control and calculated compliance. Throw in the Hydra hub’s half-degree engagement and you have a winning recipe, and there’s more. With a mind-bending number of blinged-out color combinations, you can create your own custom wheels to perfectly match the appearance of any bike. Considering an ounce of style is worth a pound of performance (28 grams style = 453 grams performance, for you metric readers), I can’t think of a better upgrade to take a bike to the next level.

We would like to thank Industry Nine for providing these products for review.

Amazing engagement and great trail feel. The carbon Enduros would have been sweet but I can’t justify the $$$ it would cost for my riding.

Michael, great article. I ride I-9’s and love them, but they are an older version. Sent my wheels in today to be upgraded, because of this article. Mine were 25mm and the jump to 30.5 seemed worth it, keeping my hubs. Greg

Glad to hear that Greg. Running tires between 2.4-2.6″ and dropping a couple PSI from my old 24.5mm rims has made a much bigger difference in ride quality and grip than I was expecting. You made a good call.