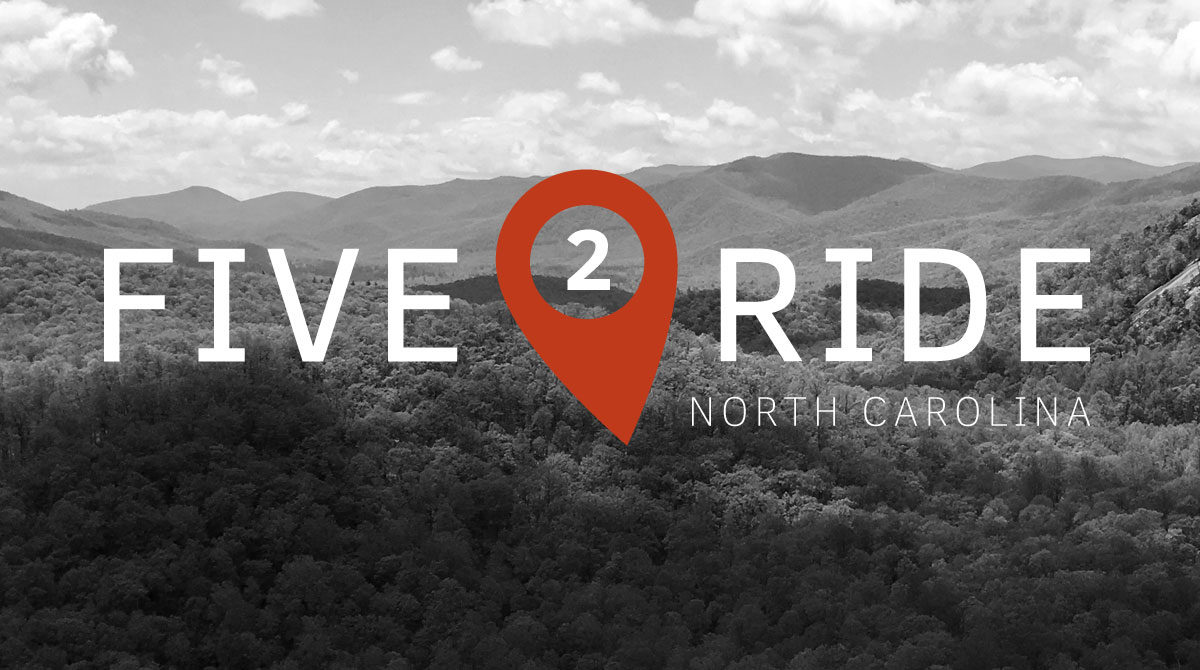 Among eastern US states, North Carolina is literally tops, with Mt. Mitchell, the highest peak east of the Mississippi River, towering 6,684 feet above the Pisgah National Forest. Though only the far western portion of the state is mountainous, hundreds of excellent mountain bike trails can be found throughout North Carolina, from the coastal plains to the Piedmont to the Appalachian Mountains in the west.

We recently asked five experts which North Carolina mountain bike trails they considered “must-ride,” and not surprisingly, almost all of them recommend riding the excellent mountain bike trails in Pisgah. For those looking for a few more diverse trail picks in the Tarheel State, we include several additional trail recommendations at the end of the article.

Wes Dickson is the owner of Sycamore Cycles in Brevard, one of two world-class bike shops located in the midst of some of the best trail systems in the eastern USA. Asking Wes to choose just one favorite ride in North Carolina is a bit like asking a parent to choose their favorite kid, but he was a good sport anyway.

Like many routes in Pisgah National Forest, the Avery Creek route involves connecting multiple trails and forest roads for maximum enjoyment. This isn’t a route one could put together on their own the first or second time out, which is why consulting an expert like Wes–who has ridden the MTB trails in Pisgah hundreds of times forward and backward–is the key to finding the best singletrack!

When I asked why this was one of Wes’s favorite rides in the state, he said, “This ride is one of my go to favorites because the climb up Buckhorn tests my uphill technical skills and Avery Creek trail is fast and chunky with some sketchy washed out sections toward the bottom.”

The Tarheel Trailblazers mountain bike club–based in Charlotte, NC–is arguably the largest and most influential group of mountain bikers in the state, with a hand in building and maintaining 100 miles of singletrack in the Charlotte metro area alone. And while Charlotte is located away from the mountains of western North Carolina, the rolling Piedmont terrain lends itself to building high quality, fun trails that are accessible to both locals and out-of-towners alike. In fact, Interbike chose to host their 2016 East Coast demo event at the US National Whitewater Center trail system due to both the quality of the trails and the fact that the trail system is located close to a major airport.

I asked Tom Ambrozevitch, president of the Tarheel Trailblazers club, for his favorite trail in North Carolina, and while he made it clear that he spends many weekends riding in Pisgah, his vote was for Charlotte’s own Backyard Trails.

“This stretch of urban singletrack provides a unique riding experience capable of challenging even experienced rides.  Bundle that ‘character’ with its very urban location and it currently being tied into the Cross Charlotte Trail (Greenway spanning the city), it’s a Must Ride.”

According to the club’s website, the Backyard Trails are “very technical, old school but sustainable […]. This trail is the one that started it all in 1987 and continues to grow and please riders of all kinds.” If you’re ever in Charlotte or just passing through, be sure to check out the Backyard Trails.

Pro Downhill racer and North Carolina transplant Neko Mulally knows a thing or two about riding fast and having fun on a mountain bike. Just watch him in the video below as he nabs 4th place at the DH World Championships in 2014, without a chain, and just two seconds off first place finisher Gee Atherton.

As a World Cup racer, Neko has ridden all over the world on some of the best courses imaginable, yet he keeps returning to his home trails in Pisgah National Forest. Neko says,

“[Bennett Gap] is one of the fastest, roughest trails in the National Forest and has some really cool rock features. I really like how easy it is to access, just a 30-minute casual pedal up the gravel road. This year it has been changed from a seasonal trail to a year-round bicycle access trail. It’s definitely a must ride for me!”

Wes from Sycamore Cycles weighed in on this trail too, saying “Bennett Gap trail has some tricky technical downhill sections early on followed by some fast tree buzzing runs towards the bottom. [This] is a ride that will leave you with a huge smile on your face.”

Aside from the fast, technical riding Bennett Gap offers, riders are also treated to killer views of the surrounding mountains, a rarity among rides in this densely forested area.

Note that this ride, along with Avery Creek and Black Mountain (below), are all located in the same general area and interconnect in various ways. Trying to connect all these trails in a single ride is certainly possible, though most mountain bikers will probably want to space these rides out to savor the magic of each trail individually.

I imagine if you asked anyone who lives outside North Carolina to name a must-ride in Pisgah National Forest, many of them would say Black Mountain, and with good reason. The Black Mountain trail features an excellent descent chock full of rocks and roots set among lush mountainsides covered with ferns and rhododendron. It’s also one of the quickest and easiest trailheads to find in a forest that often feels like navigating a plate of spaghetti.

Rich Dillen, aka “Dicky,” is a mountain bike racer and professional bike messenger based out of Charlotte, NC, and on the days when he’s schlepping critical legal documents across town, he tells us he’s dreaming of that Black Mountain descent.

“The Black Mountain Trail in Pisgah is my absolute favorite descent in NC. Pedaling through the rhododendron tunnel at the top knowing that the gnar starts right around the corner and keeps on in every way, shape, and form until I reach the bottom gives me much [excitement].  Once I get my wheels on Middle Black, my lizard brain kicks in full brapping throttle. Zen levels of nirvana and stupid bliss.  Plus, it doesn’t hurt that when I get to the bottom, it’s a pretty short ride to the Pisgah Tavern.”

When we asked Jacob McGahey, Vice President of Industry Nine, which North Carolina trail he considers “must-ride,” his first choice, like Dicky’s, was Black Mountain. His second choice, however, is another Pisgah trail called Squirrel Gap that is much more pedal-ly than the other Pisgah trails and routes described above.

“I love [Squirrel Gap] because it serves up a ton of narrow “old school” singletrack, with steady climbing opportunities, some high speed descents, and some really technical rock and root sections.  While I’ve cleaned everything on the trail independently, I’ve never had a 100% clean run end to end – it is always a challenge. It is also one of the rare trails that is almost equally fun to ride in either direction!”

Generally, mountain bikers choose to ride Squirrel Gap as an out-and-back, though it can be combined with other trails like Black Mountain for a massive, all-day loop.

If technical trails and big mountain riding isn’t your style, don’t worry–there are plenty of other great trails in the state of North Carolina worth checking out. Here are a few more of the best NC trails, based on Singletracks member reviews and ratings.

Kerr Scott Trails: There are several highly-rated trails located along the shores of Kerr Scott Reservoir near Wilkesboro, NC, including the Overmountain Victory Trail, Warrior Creek, and Dark Mountain.

Dupont State Forest: While technically not part of the Pisgah National Forest, the trails at Dupont are located in the Brevard area and offer what many refer to as a “Pisgah-lite” experience. Dupont features some excellent flow trails, exposed granite riding, and impressive waterfalls to explore.

Bent Creek: This is another trail system in the Pisgah area, though not officially part of the forest itself. The trails within Bent Creek are less technical, though still featuring several fun descents like the Greens Lick trail.

Wild Turkey: According to Singletracks members, the Wild Turkey trail in Greensboro is one of the most popular mountain bike trails in North Carolina east of the mountains.

North Carolina is a state full of excellent mountain bike trails, especially within the mountains in the western part of the state. Which North Carolina trails do you consider must-ride?

Trails
The Power of a Pop-Up Mountain Bike Park in Charlotte,...
Trails
Everything You Need to Know About Mountain Biking and Visiting...
Culture
Pro Mountain Biker Jolanda Neff Suffers Serious Injuries in Pisgah...
Videos
Watch: Butt Puckering Fun on Bennett Gap - One of...

Pisgah should have is own 5 to ride.