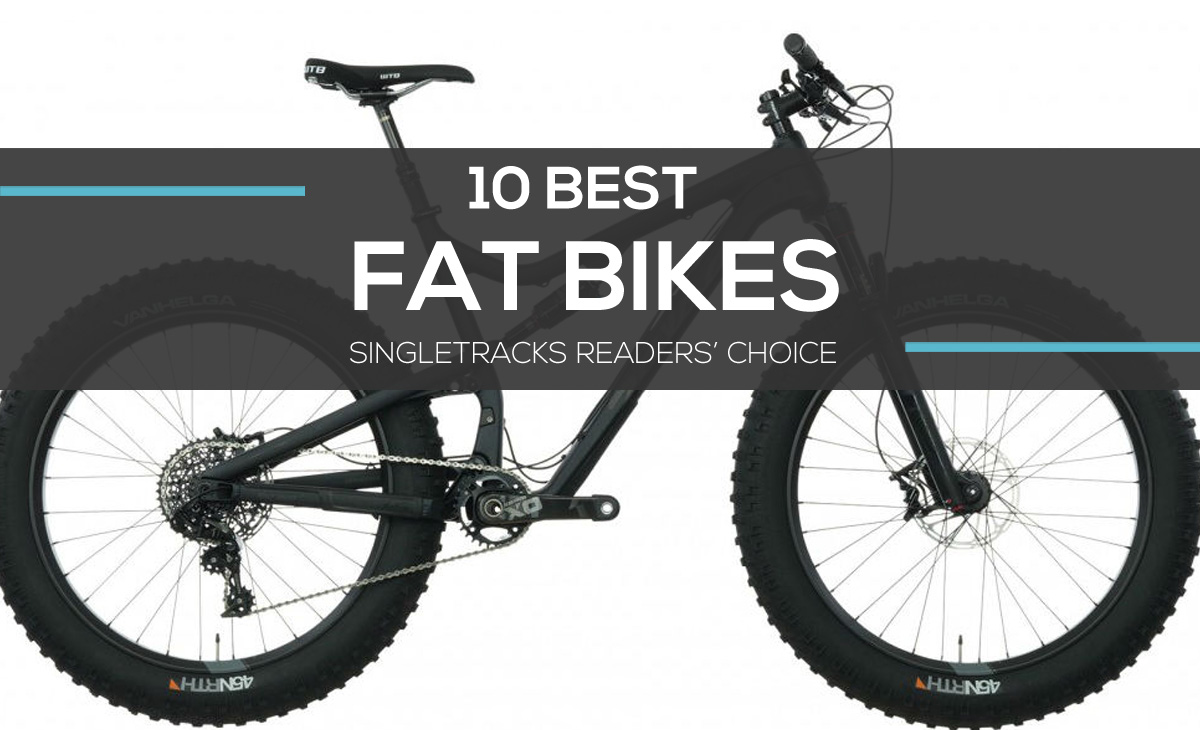 The fat bike movement has largely settled into its niche within the mountain bike market. Some riders will continue to be dedicated fat bike riders, others will only ride fat during the winter, and still others will never ride anything wider than a 2.5″ tire. While the dedicated fat bike brands continue to push for improvement, not much has changed in fat bike tech over the past year. Providing further evidence of this stagnation (or is it stabilization?) in the fat bike market is our readers’ choice survey data for 2017, related here, which reads remarkably like the 2016 list.

One interesting takeaway from our survey data this year is that many readers apparently don’t know what a fat bike is–or at least, how it differs from a plus bike. The definition of this niche is only obfuscated by Specialized obstinately referring to their 27.5+ bikes as “6Fattie” — the only brand in the industry to use that confusing naming convention. For the purposes of this list, we’re defining fat bikes as any bike with a tire measuring 3.8″ or wider.

The Framed Minnesota is new to this readers’ choice list for 2017. Framed has made a name for themselves by selling affordable fat and plus bikes, mostly direct to consumer (although they are available in some shops). They’re a staple on our Budget Buyer’s Guide lists–both for fat bikes and hardtails in general–due to the high value per dollar ratio that they offer.

While many intermediate models exist, the top-tier Minnesotas offer either a RockShox Bluto suspension fork, RST suspension fork, or a rigid carbon fork, with a SRAM X7 2×10 drivetrain and Avid BB7 disc brakes. The tires (and axles) also get a bump up in size, to 26″x4.8″ 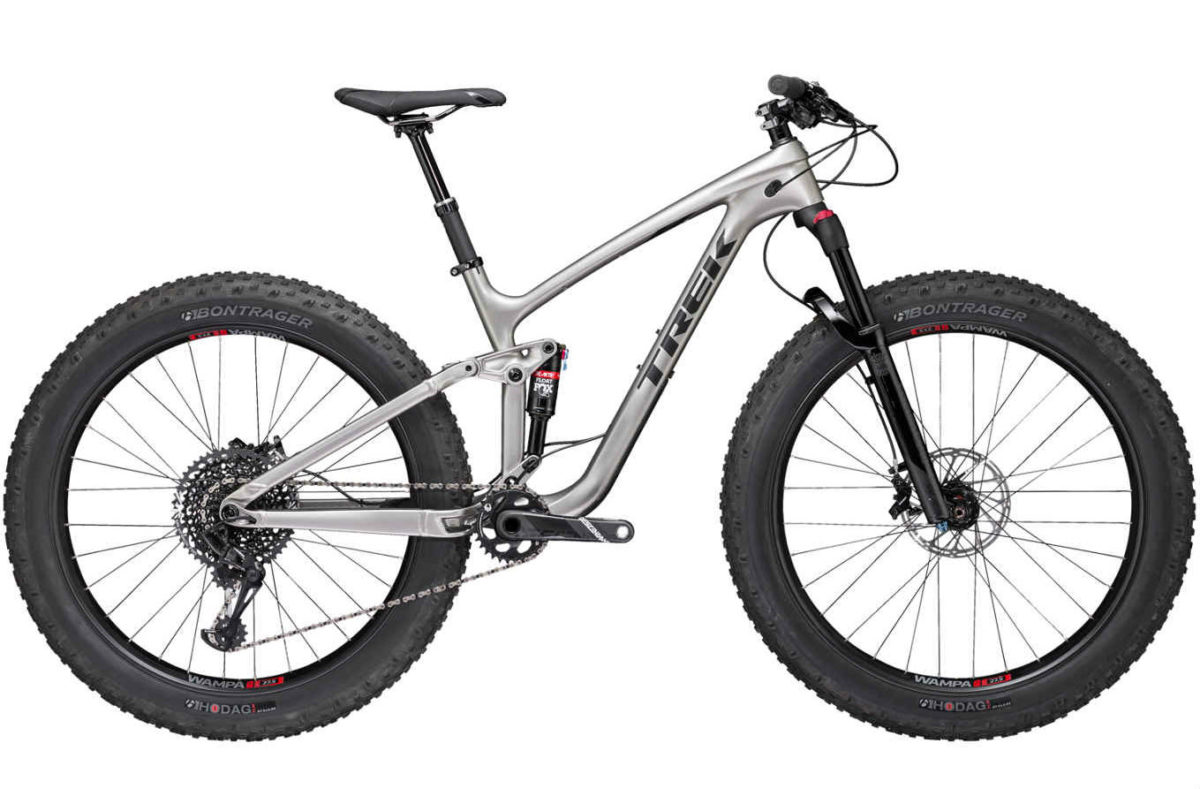 The integration of front and rear suspension with full-fat tires is one bright spot of innovation in the fat bike market over the past two years, but it still isn’t widespread by any means. That said, the Farley EX made this list of its own accord this year, without having to be included as a subset of Trek’s standard Farley like it did in 2016. 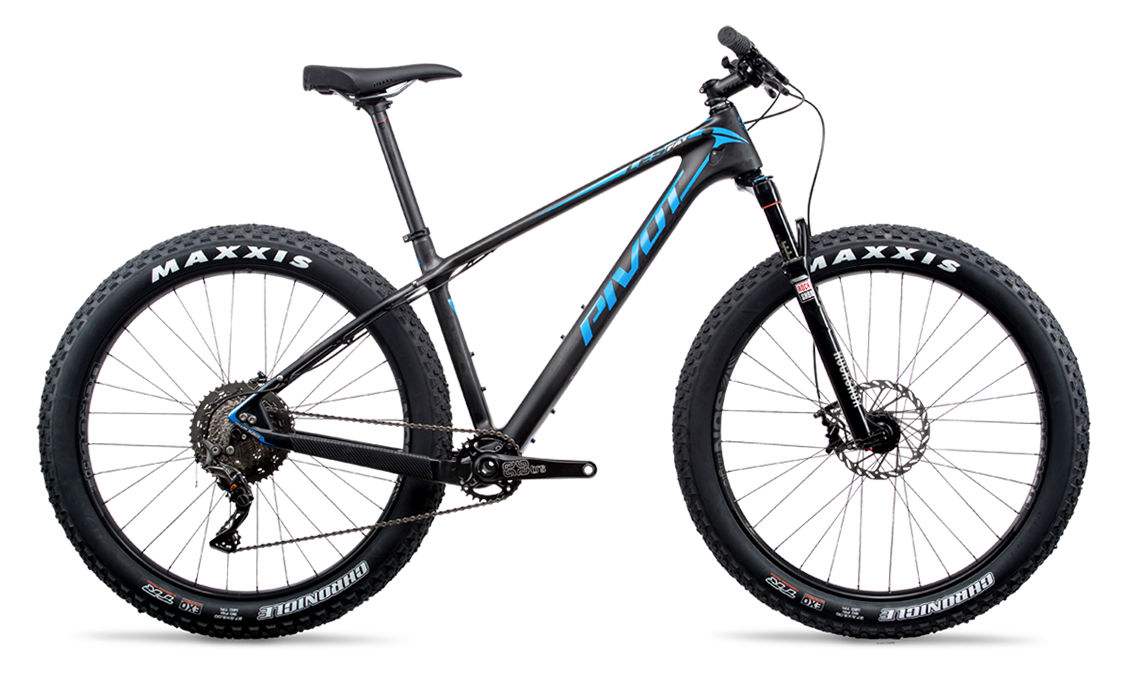 The name of the game is “versatility” when it comes to the Pivot LES Fat. This fat bike is specifically designed to be compatible with every single plus-size or fat-tire wheel+tire size on the market, thanks to the “patented Swinger II dropout system.” This dropout system “[enables] you to run almost any available plus or fat bike wheelsize, easily switch between singlespeed and geared drivetrains, and choose your chainstay length based on conditions and desired handling characteristics,” according to Pivot.

As for suspension, the LES Fat is available with both rigid and suspension fork options.

The Pivot Les Fat tied for 7th place in 2016 with the Salsa Mukluk, but the Mukluk surprisingly pulled away substantially in the votes this year. The Les Fat’s most expensive model dropped $200 off the MSRP for 2017/18. 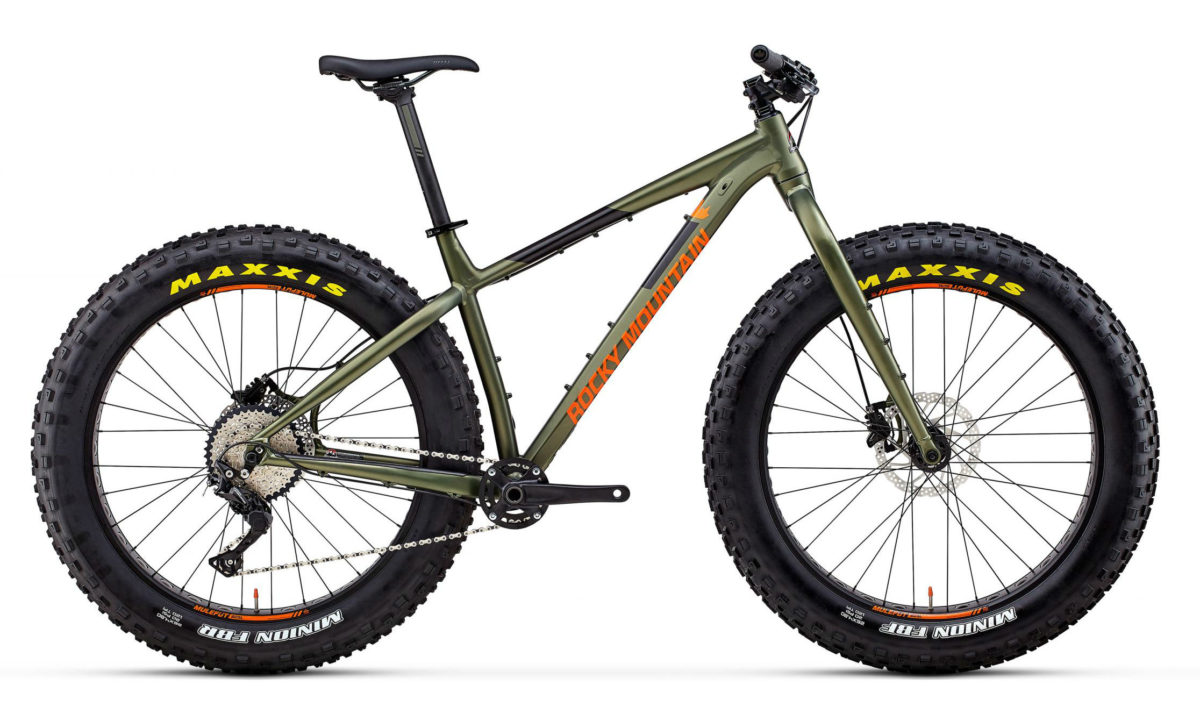 With the introduction of the Blizzard, Rocky Mountain focused on bringing trail bike geometry and handling to the fat bike market, and if the high praise this bike receives is any indication, they’ve succeeded! Rocky Mountain has definitely played on their freeride heritage with the marketing of the Blizzard, with films such as “2 Fat and 2 Furious.”

The Blizzard line has been simplified for 2017/18, with the three remaining models only offering a rigid aluminum frame, with no suspension fork option. The headtube is still tapered though, making it compatible with a Bluto or Mastodon for an aftermarket upgrade. The geometry also changed slightly for this year, with the head tube 0.6° slacker and the chainstays 15mm shorter. The tires are still max-fat 26″x4.8″–specifically, Maxxis FBF and FBR treads. The drivetrain is a Shimano Deore 1×11 on the top-tier $1,899 model, with Shimano M425 brakes.

It will be interesting to see if this significant change to the Blizzard line pays off for Rocky, as the model gained substantial ground on our list this year–up from spot #10 in 2016 to #8 in 2017. It appears that Rocky is doubling down on the more affordable, fully-rigid alloy models–and they aren’t the only brand we’ve seen make a similar change in their fat bike line. 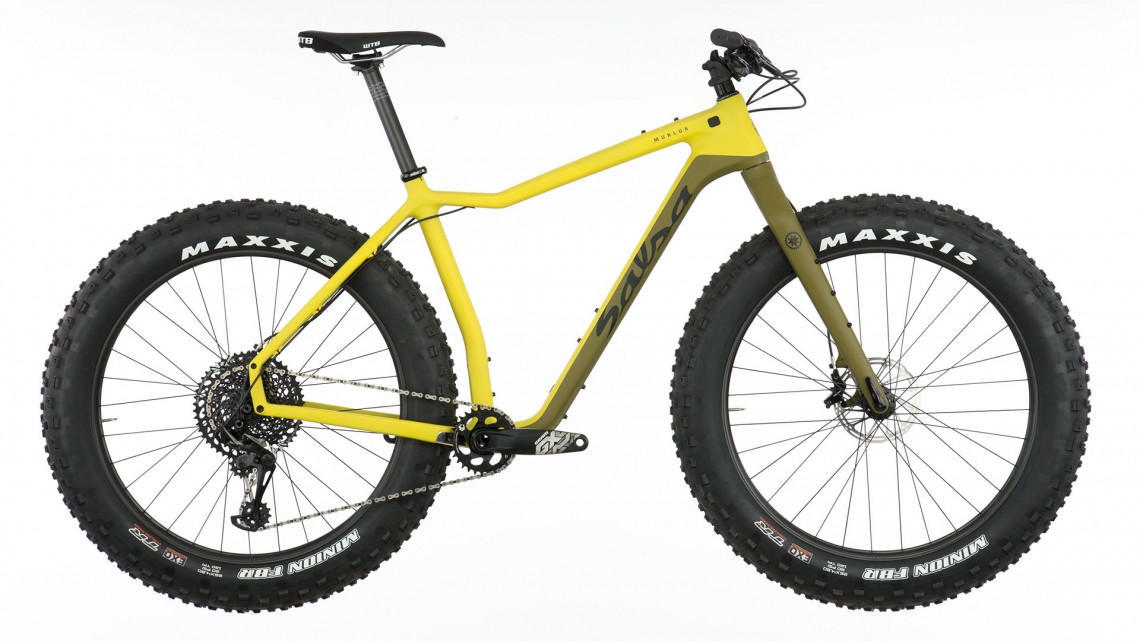 The Salsa Mukluk was one of the earliest fat bike models on the market, yet it manages to maintain the #7 spot on our list while the Pivot Les Fat (tied with the Mukluk in 2016) slid several places. It’s possible that the introduction of carbon Mukluk models for MY17 has helped boost the popularity of this longtime fatty.

For 2017/18 the tire sizes have increased to a max-fat 26″x4.8″, and the top-tier model has gotten a few hundred dollars more expensive with the addition of a SRAM Eagle X01 12-speed drivetrain. The price for the most affordable model has remained the same. 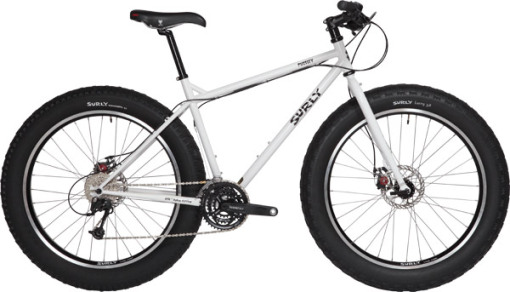 The Surly Pugsley is one of the OG fat bikes. While very little has changed on the Pugsley over the years, this 4-inch fat bike model is still going strong and has a very loyal following, as the #6 ranking on this list shows… although it did slide a position from 2016 to ’17.

Despite its apparent popularity, the classic geometry found on this fat bike leaves much to be desired. More recent fat bikes, such as the Ice Cream Truck, have adopted trail bike-inspired geometry, offering a much-improved ride quality out on the trail. 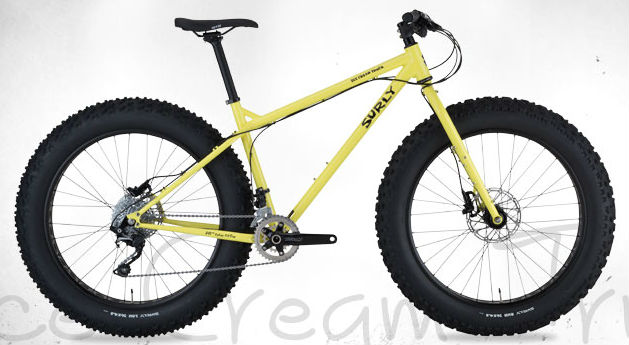 Surly’s Ice Cream Truck brings modern trail bike geometry to the 5-inch fat bike portion of their lineup, with a 68-degree headtube angle. You could consider the Ice Cream Truck a revamped Moonlander. While the steel frame and fork are held over from the Moonlander, the handling is radically different thanks to the updated geo. The Ice Cream Truck also offers the latest 197mm rear hub spacing. 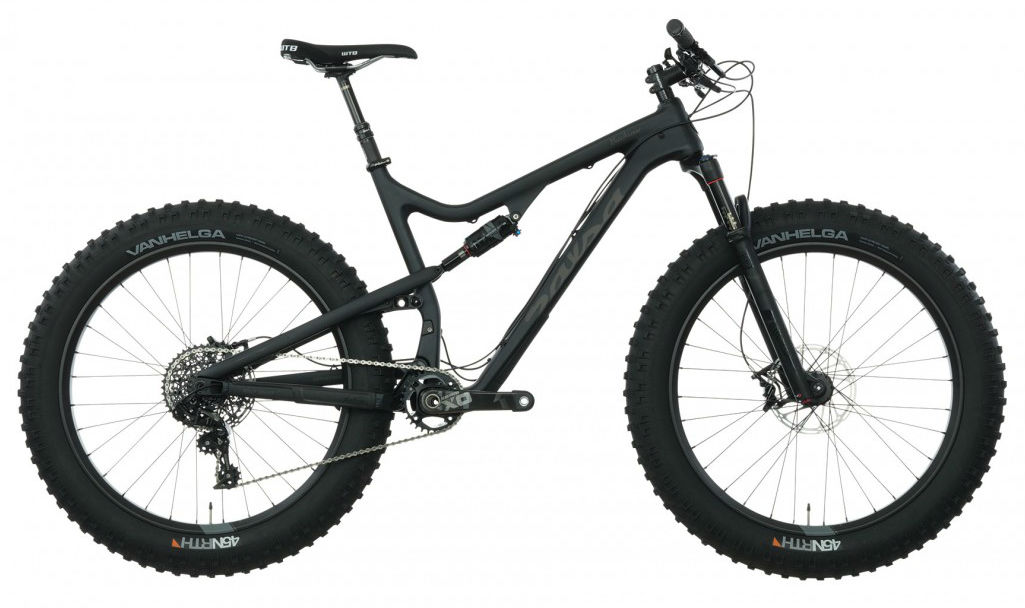 The top-tier Bucksaw is still running an 11-speed drivetrain and a Bluto suspension fork, indicating it could be due for a revamp soon. However, it manages to weigh much less than its competitor, the Trek Farley — just 31lbs 7oz in a size medium. 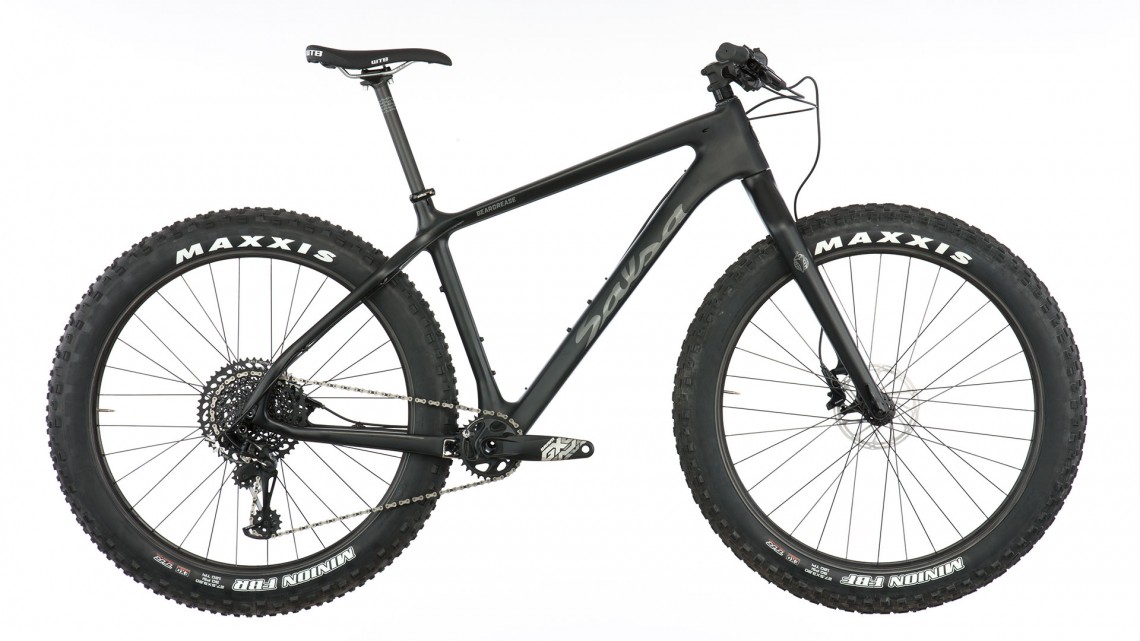 One of the first models to challenge the paradigm of fat bikes as heavy and cumbersome, the Beargrease is a carbon fat bike with a racey geo. While the Mukluk might be longer-running in Salsa’s line than the Beargrease, and the Bucksaw has squish both front and back, thanks to the ultra-low weights achievable on the Beargrease and the proven geometry, it’s obviously a fan favorite in the fat bike world. It scores the #3 spot on our list for the second year in a row and was also voted the #1 fat bike in our 2014 survey.

For 2017/18 the prices on the models have increased, but mainly as a result of some major upgrades. Salsa is speccing improved build kits, has changed the wheel size from 26″x4″ to the new 27.5″x4″ size, and is now only selling the Beargrease in carbon. 27.5 fat is becoming widely accepted as a faster-rolling fat bike standard, and Salsa is now categorizing their Beargrease for “Groomed Racing.” 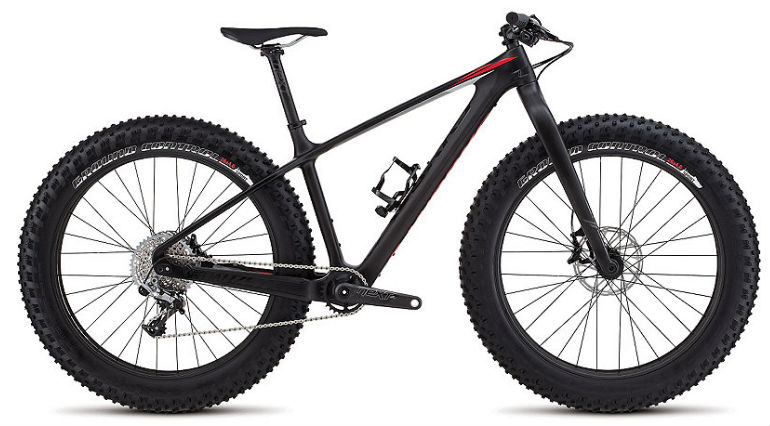 The Specialized Fatboy and the Trek Farley swapped places from last year, with the Fatboy claiming a #2 ranking for 2017. Last year it claimed the coveted #1 spot on our list, and it also ranked highly before: #2 in 2015 and #3 in 2014.

The Fatboy appears largely unchanged from last year, with the more affordable models offering 26″x4.6″ tires, the higher-end models offering 26″x4.0″ tires, and none of the bikes offering a suspension fork. The top-tier S-Works Fatboy features a full carbon frame and fork, HED Big Deal carbon rims, Fast Trak Control 26″x4.0″ tires, a SRAM XX1 11-speed drivetrain, and SRAM Guide RS carbon brakes. The 11-speed XX1 drivetrain seems strange on a $7,000 bike in late 2017–I’d wager the entire Fatboy line is due for a revamp soon, and not only will we see drivetrains move to 12-speed, but we could see some wheel/tire size and suspension changes as well. 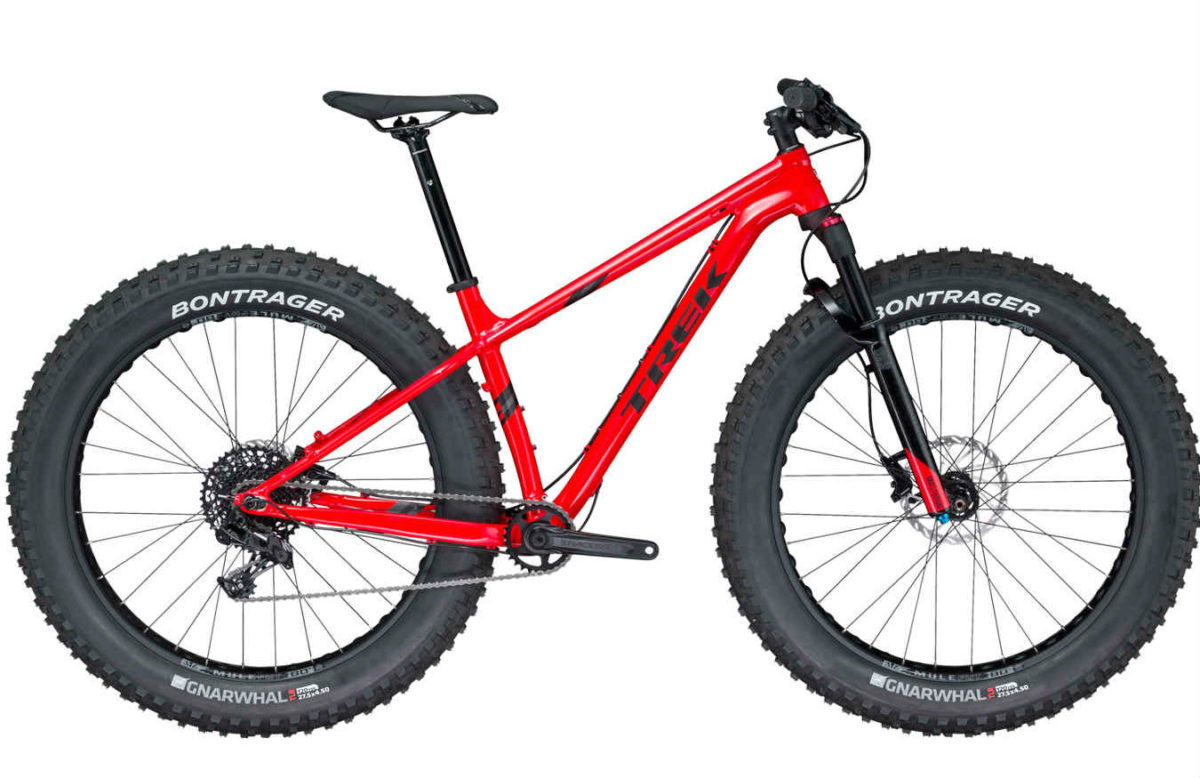 Despite removing the votes from the Farley EX and categorizing the full suspension model as its own bike, Trek’s Farley still advanced in the rankings for 2017, passing the Specialized Fatboy handily to claim the #1 spot.

Trek pioneered a new tire size with the introduction of their race-oriented Farley fat bike: 27.5″x4″. Since then, the 27.5″x4″ tire size has been adopted by other brands, primarily for use on other race-oriented fatties, as I mentioned in the write-up for the Beargrease. However, some models in the Farley are also compatible with wider 5-inch tires on 26″ rims, and all of the newest Farley models come with 27.5″x4.5″ tires.

New for 2017/18 is a $2,399 MSRP Farley specced with a Manitou Mastodon 34 Comp suspension fork up front. Last year, all of the Farley models were rigid. While the Mastodon comes stock in just an 80mm-travel length, the fork is adjustable up to either 100 or 120mm of travel, depending on the model of the Comp. The drivetrain on this bike is a SRAM NX 11-speed setup and the brakes are SRAM Level T hydraulic disc brakes.

While I mentioned that the fat bike market appears to be stagnating or stabilizing, depending on how you look at it, like all mountain bikes, today’s fat bikes are still better than ever. The introduction of the Manitou Mastodon may seem minor, but as it’s prevalence on this list just months after its release indicates, the Mastodon rides radically better than the Bluto. My own test of the Mastodon has thus far confirmed this widespread opinion. Access to an even better suspension fork option will only open the door to more suspended fat bikes that ride better than ever before.

I’d like to see an article on “Best Adventure Fatbikes”, i.e. fattys that don’t care how long it takes to get somewhere but have the best float and traction outside of the groomed roads. To me, it’s all about the adventure and going where you’re not supposed to be able to ride (mentally I mean, not illegally).

It would have been nice to get the weight of all the bikes.