Read any mountain biking mag or hang out at the LBS and chances are you’ll hear people talking about the latest craze to hit the market: fat bikes.

Whether they are a fad or a solid piece of engineering that extends our sport in new directions is a conversation for another day. But in the meantime, I have one in for testing! 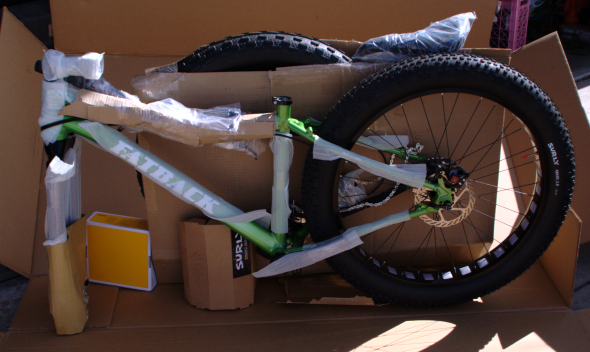 The Fatback arrived nicely packed and required minimal assembly which took just a few minutes. Right out of the gate the brakes were adjusted correctly and the 3×9 SRAM grip shifters were perfectly indexed.

Even with these modest component specs the Fatback weighs in at an ounce under 30 lbs before installing your choice of pedals. That’s right–a fat bike that weighs 30 lbs!!!

I’ve already been out on a few rides with the Fatback. While there is no doubt that these bikes are the tool of choice in the frozen north on their groomed snowmobile and XC ski trails, how will it do here in Colorado where we get only occasional snow, and the weather can go from flip-flops to blizzard in 24 hours?

Stay tuned and I’ll report back once I put some more miles on this beast!

Looking forward to the long-term review!

Sooo, you must be having a blast right now? Did you get hit with that massive snow in your area? I would love to try one of those, they just look fun. Can’t wait to read the follow-up.

It snowed all day but it was so windy that there was less than an inch on the driveway.

My carbon 29er frame broke in October 2012 and while it was being replaced, I bought a Salsa Beargrease and have been riding that religiously ever since. Fatbikes are just fun bikes. I live in west Denver and ride the front range trails 5-6 days a week in every condition and temperature, including the most technical ones. Though I ride expert trails, I don’t consider myself an expert rider, and I can attest that these bikes, fully rigid with their voluminous tires, allow for a riding experiences that is unique and often unparalleled. Those fat tires gobble up the small bumps on the trail and roll over sharp steep technical features with ease thanks to infinite traction. I have come to prefer certain trails on my Beargrease over my now new Niner RIP 9 RDO with 130mm of travel, simply because of the traction and overall ‘ride’. At 28lbs, my tubeless fatty cannot be beat for climbing loose rock or sandy sections. I too look forward to your long term review; a true skeptic about these bikes at first after moving recenty from Florida, I am now a faithful follower in the fatbike revolution. Viva la Fat! 🙂

The darn thing is lighter than my AM Kona! I’d love to try one, not sure I would want to buy one for out here in Northern California though.

As you know I am a bit biased towards the Fatback brand from being close friends with the owner, designers and most all the other people behind the company. Greg and the rest of the crew are behind every aspect of these bikes, just like the ease of assembly right out of the box they go the extra effort to make sure their products speak for themselves. And the component options and configurations that are available now make ordering one a pretty personal and customizable experience.
After living in Alaska for 40+ years Im f’n tired of the snow.And have no desire to ride in it. But Ive spent the last month riding a basic 26″ hardtail down the beaches of Costa Rica and Im thinking one of these Fatbacks is coming with me next year. Oh yea 😀

I have seen a few people with a fatty on the front, and I am thinking of doing that to my Niner Air 9 Carbon too.