Watching the birth of fat bikes in the mountain bike industry has been nothing short of breath taking. Drawing from personal experience, this fat-tired wonder opened up a lot more trails as well as placing big grins on our faces. Before fat bikes we had been riding our mountain bikes year-round, putting on the studded tires when the snow started to accumulate and whipping them back off again as the ice melted in the spring spring. About three winters ago, a wide tread mark kept beating us to the trails and part way through the season, we finally spotted the culprit: a Surly Pugsley Black Ops. 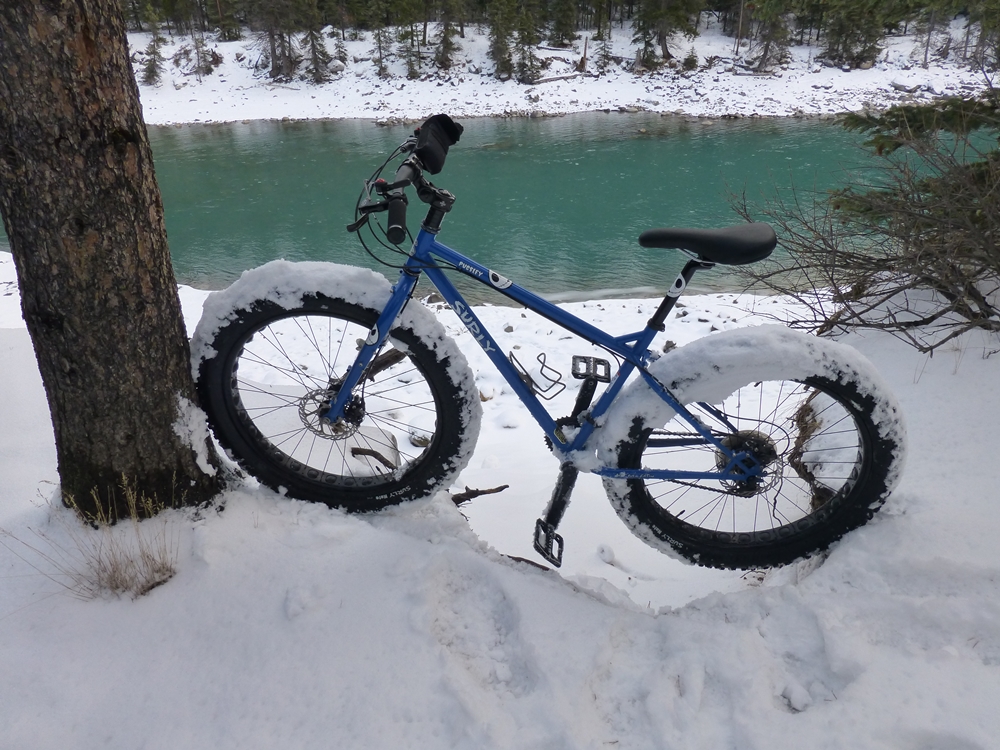 A month or so later, Freewheel Cycle Jasper had a fat bike demo day. Happily for us, there weren’t a lot of people trying them. We ended up testing the fat bikes on an old rutted dirt road, the bike park, a frozen lake, the town walking path, and off path through the virgin snow. We became absolutely hooked on the idea of riding these in the winter versus what we were doing at the time. The rest of the season saw us driving 80 kilometers to rent Freewheel’s fat bikes, when the conditions in our town were counter productive to riding skinny (our studded mountain bikes). That was 2012. The fall of 2013 we had the opportunity to purchase a pair of Surly Pugsleys. We’ve had them out on all kinds of trails in Alberta and British Columbia. 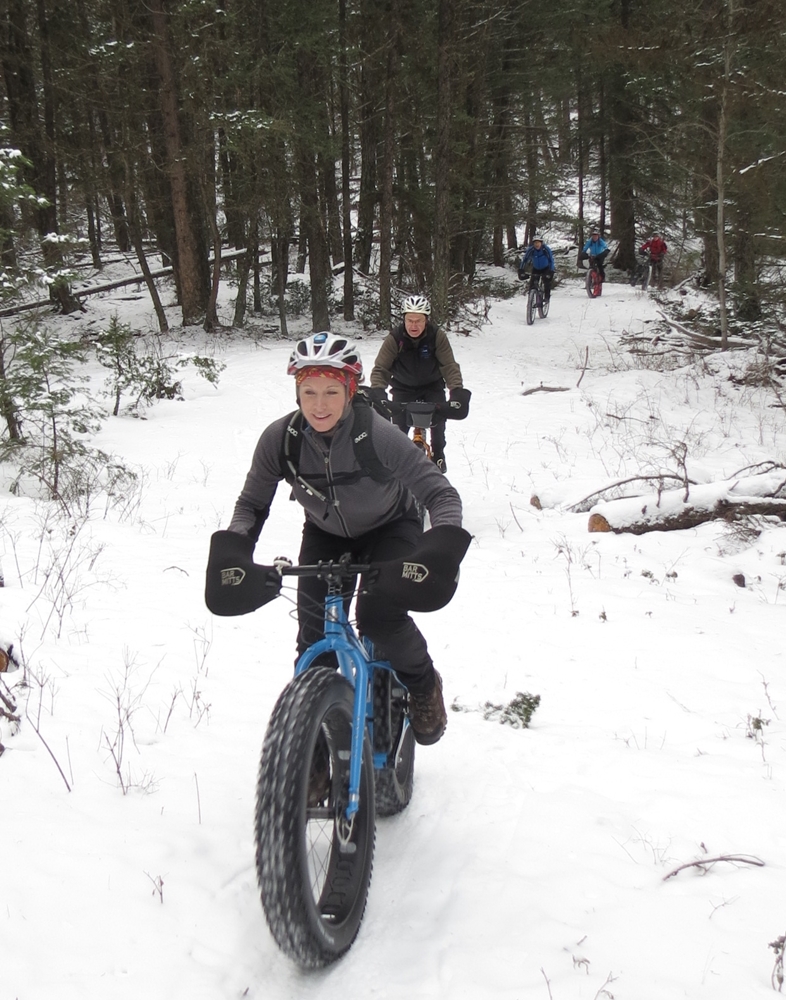 Sales of fat bikes were through the roof that year and with the explosion of fat bike owners came a multitude of fat bike pages on Facebook. I belong to three group pages; two are are- specific while the third is literally comprised of riders from around the world! For those curious fat bike followers, the pages are: Jasper Fat Biking (Jasper, AB), Fat Fockers (Kamloops, BC) and Fat Bikes (world). These are three entirely different pages as well as groups of riders riders. While just a few of us post on the Jasper page, the Kamloops Fockers are a large number of enthusiastic fat bikers, with a core group who get out with snowshoes–and a groomer when needed–to keep the trails rideable. Members of the Fat Fockers update statuses on trail conditions, post trail expansion ideas with community involvement, and upload a number of great photos.

The Fat Bike page is an entity of its own. Being member #150 (+/-), I have watched the group grow to almost 6,500 members worldwide. The topics vary from what fat bike should I buy, what winter clothes and boots do you recommend, what GPS is best, what studded tires, how about night lights, all the way to the most controversial one, “Once You Go Fat, You’ll Never Go Back!” That topic tends to raise the hackles in different ways, depending on the rider. 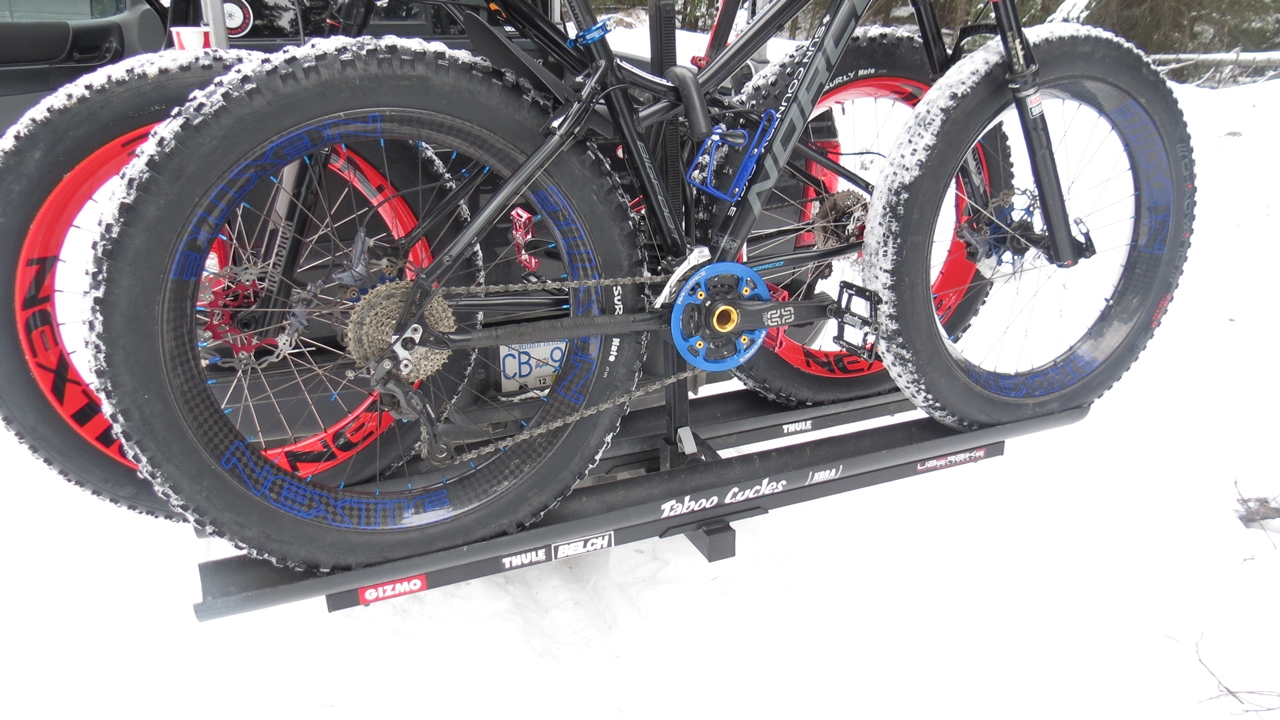 Some riders are steadfast in their belief that fat bikes are the wave of the future and that we can wave good-bye to normal mountain bikes. And the evidence seemed to be in the interest and sales. Retailers in some areas couldn’t keep up with the demand, with Surly, Salsa, and Konas being produced for Canada. The industry was taken completely by surprise and mountain bike makers jumped on the bandwagon. This past year saw well known names in North America, like Trek, Specialized, and Norco, introduce their versions of a fat bike.

With this new wave of bikes came the redesigning of accessories to fit fat bikes and their riders’ needs, depending on where they rode. This included items such as panniers, racks, frame bags, lights, fenders, and attachments for carrying any number of items. These versatile bikes were covering all kinds of territory.

That also brings up the often unseen point in the debate, “are fat bikes a trend or not?” Where and when are fat bikes being ridden and how does that affect the market in a given area? For most of Canada and a chunk of the USA, winter has a lengthy grip. Personally, we bought the fat bikes primarily to ride in the winter. 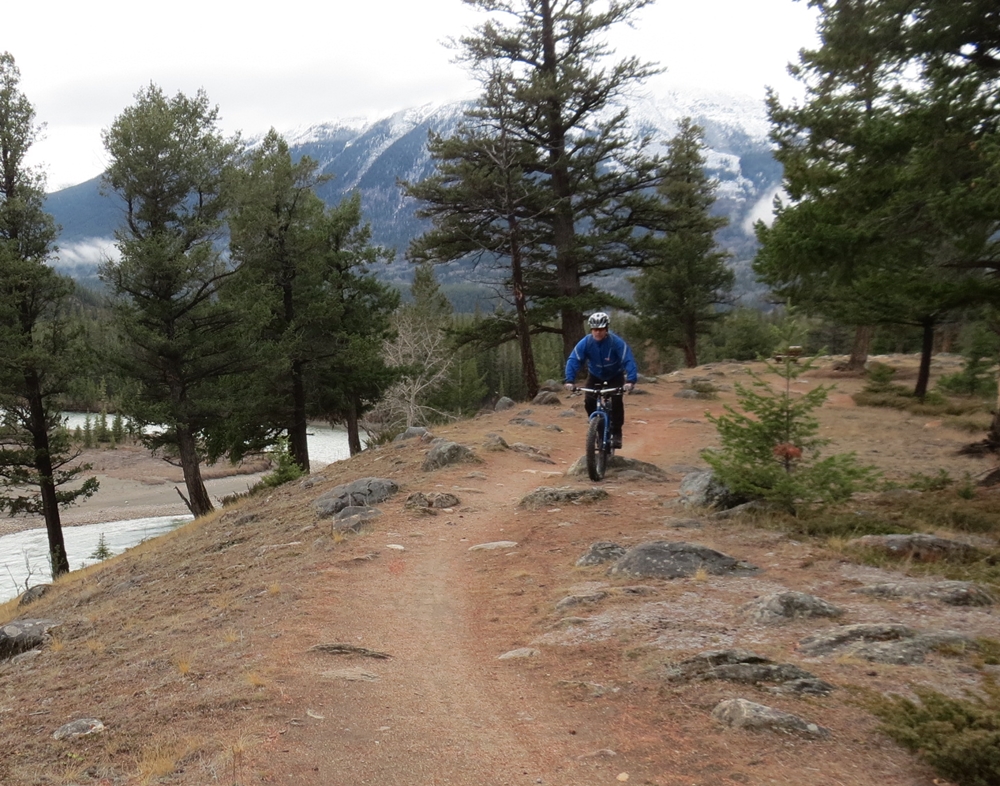 Fat bikes are proving, however, that they aren’t just a bike to ride in the winter… and if you do a search on fat bikes, you’ll find that some of them, originally, weren’t even intended to be winter bikes. Hundreds of photos of fat bikes in almost every country can be found on the internet, proving how they are being used as travel bikes and work horses. You can even find videos on YouTube of freestyling, touring, and even hunting on fat bikes. It is amazing what some of these riders are doing with fat bikes!

Since I try not to use a motorized vehicle at all when at home, I will use either of my bikes depending on how much time I have. The looks I get and the curiosity of non-riders when I do a solo ride on my fattie to the library or to get bread make the fat bike a fun training bike in the summer. My husband will only ride his fatti in the winter as he loves his Santa Cruz Carbon Blur for the rest of the year.

Is fat biking just a trend? I don’t think so, but I also don’t think they will entirely take over the biking market.

Your Turn: Do you see the fat bike craze slowing down anytime soon? Why or why not?

Sandra Pelley hails from Hinton, Alberta. She rides year-round and favors full suspension mountain bikes and fat bikes over road bikes. She and her husband travel all over western North America to ride their mountain bikes, and her bucket list includes a Women’s Only Weekend at Ray’s Indoor MTB Park in Ohio, Finale Ligure in Spain, France, Kingdom Trails in Vermont, and the Trestle Bike Park in Colorado, to name a few.

chuckpelley
Been on some form of bike as well as taking photos for as long as I can remember. Mountain biking became a lifestyle in 2011, with the goal to travel North America, hitting as many trails as possible. Finding literature on mountain biking trail is difficult and it is great to be given this opportunity to help spread the word!

Not a trend… but not a replacement for standard MTB, either. We started, like you, riding studded MTB tires during winter in northern Wisconsin. Now, living in the mountains of central Colorado, we have added fat bikes to our stable and while they are great for winter snow riding we find them indispensable on the motorized trails across the valley from where we live. These trails are very sandy and can have ruts from the motorized traffic (ATVs, jeeps, motorcycles). The fat tires roll over these trails and crawl up the steep climbs like monster trucks. Wouldn’t live without them and wouldn’t give up the regular mountain bikes for sweet singletrack, either.

I do a fair amount of guiding in the summer and I always cringe a bit when the Fat bikers jump into the Elite level mountain biker group. The worst crashes and injuries I’ve seen to date have been Fat bikers trying to keep up with very fast Mountain bikers on very technical terrain. All that undamped bounce can make for a very sketchy ride at high speeds. They are a blast in certain conditions but from what I’ve experienced, not that well suited to very high speeds on very technical, broken terrain. Medium speeds on sand or snow, they can’t be beat. Just another one to add to the quiver but by no means a replacement. When I see riders in the Parking lots bounce their wheels around like dribbling basketballs you see clearly why they have their limitations…

I suppose it would depend on where one lives to determine if fat bikes are a fad. I live in Southwestern Ontario, Canada and ride year round. Trails around here are rideable about 9 months per year. (I ride roads and paved trails the rest of the time) Once the snow arrives – and stays – and keeps accumulating, I don’t believe a fat bike would be of much use unless the trails are groomed, which in my area, are not. I ride my 29er in about 3-4 inches of snow tops.

Hey Damian, ride a lighter fatty. My fatty weighs 24 pounds and it will go when I ask it to. Of course you aren’t going to climb any faster but I am not any slower than I am on my other 29ers. No, they are not for everyone. I was planning on buying a full sup and saved 3 years to get a nice one and ended up with the Fatboy Superlight by Specialized. My two cents. It will be my primary race bike this year and I am also going to do some races in the fat category instead of the old man’s over 60 age group. 🙂

All fat, all the time. My fattie has proven to be so much fun that I sold my other bike and then upgraded to a Bluto-equipped fatbike. I am not a speed demon, but I do ride in the front third of summer group rides with ease. And my race times are on par with my peers on much lighter bikes. Sure, that means I could go faster if I was on a lighter bike, but I love the challenge my fattie provides. My favourite trails are hard-packed sand with roots and the fattie is fantastic on that terrain. And my fitness level has never been better (plus my calves increased 3/4″ in circumference in six weeks time riding in summer). My fat bike has renewed the feelings of fun that cycling used to provide. That’s a good enough reason for me to go four-season fat.