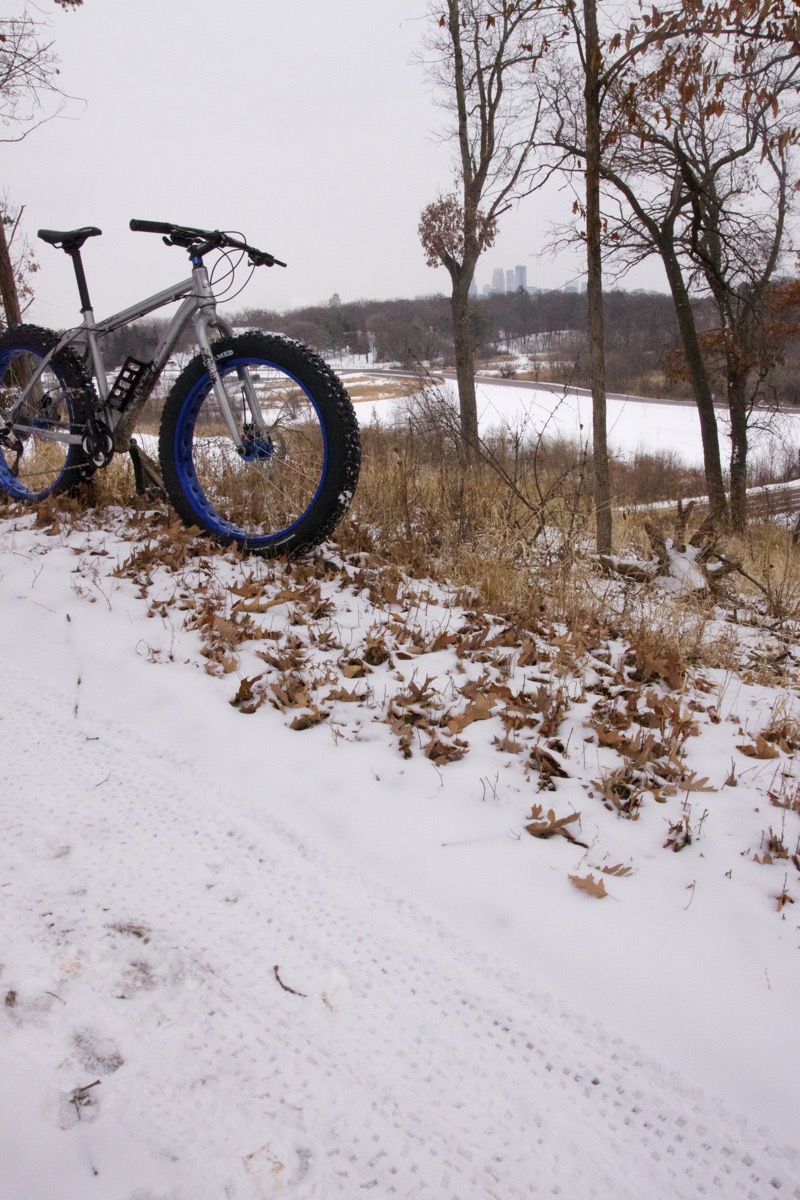 Minneapolis is a seemingly unlikely place to find mountain bikers. It’s a big city, cold in the winter, and heck, it’s mostly flat. But don’t let any of that fool you–there’s mountain biking to be found here!

Last month I set out to explore Theodore Wirth Park, located just a couple miles west of downtown Minneapolis. I reached out to Eric and Stephen at Gear Junkie to get their trail recommendations, and not only did they tell me where to ride, they also set me up with a demo fat bike from Framed Minnesota.

Minneapolis is world-class when it comes to pedestrian and bike path access within the city, and it just so happens the Gear Junkie offices are located right on the Midtown Greenway in the Lyn-Lake neighborhood. Before setting out I grabbed two Gear Junkie Buffs for my head and neck and pedaled a couple blocks to the closest bike shop–The Alternative Bike & Board–to get the pedals swapped out (thanks guys!). 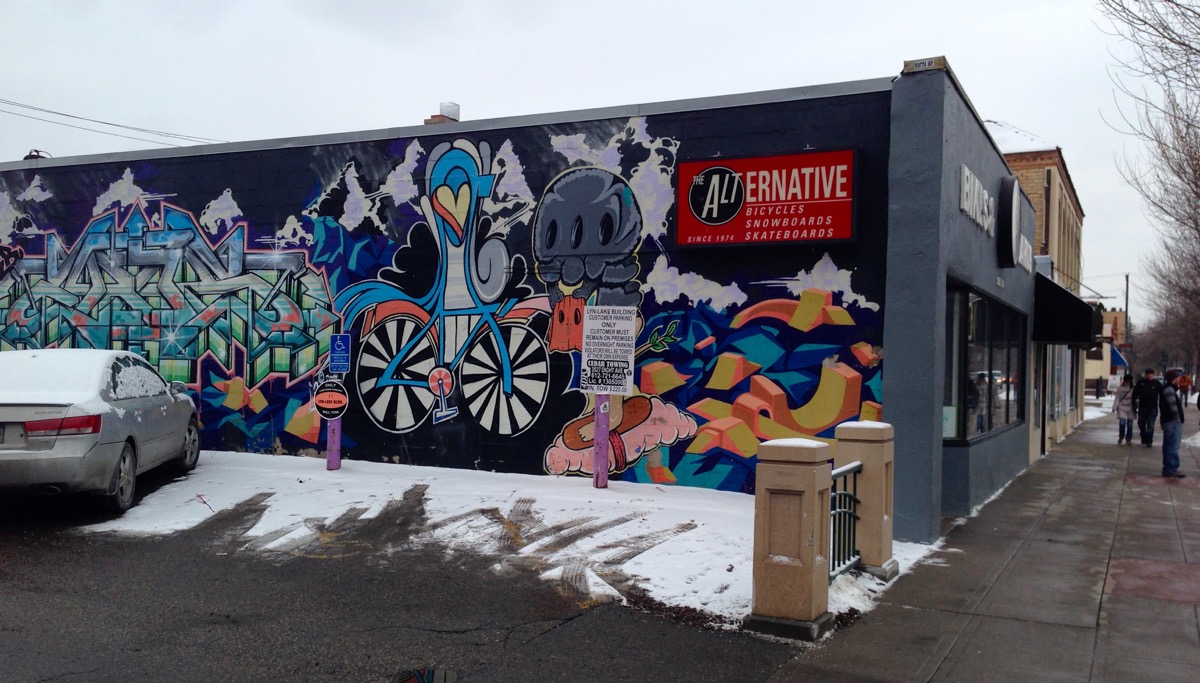 It was an unusually warm February day in Minneapolis–the highs would reach the mid-twenties–but fortunately for me, there was still plenty of snow on the ground. As a Georgia resident, I don’t get to play in the white stuff often, and this would be my first experience riding a fat bike in the snow.

The pedal out on the Midtown Greenway was a bit of a slog, especially with low pressure and 4.8-inch tires, but fortunately the greenway was mostly dry thanks to expert snow plow work. After a couple miles or so, I turned right, following the signs to the Cedar Lake Trail, which would take me up and around Cedar Lake. At Cedar Lake I was tempted to take the Framed Minnesota bike out onto the ice, but the signs warned it was unsafe. (I was later told these were mostly in place for liability purposes. At least they worked at keeping this Georgia boy off the frozen pond.) 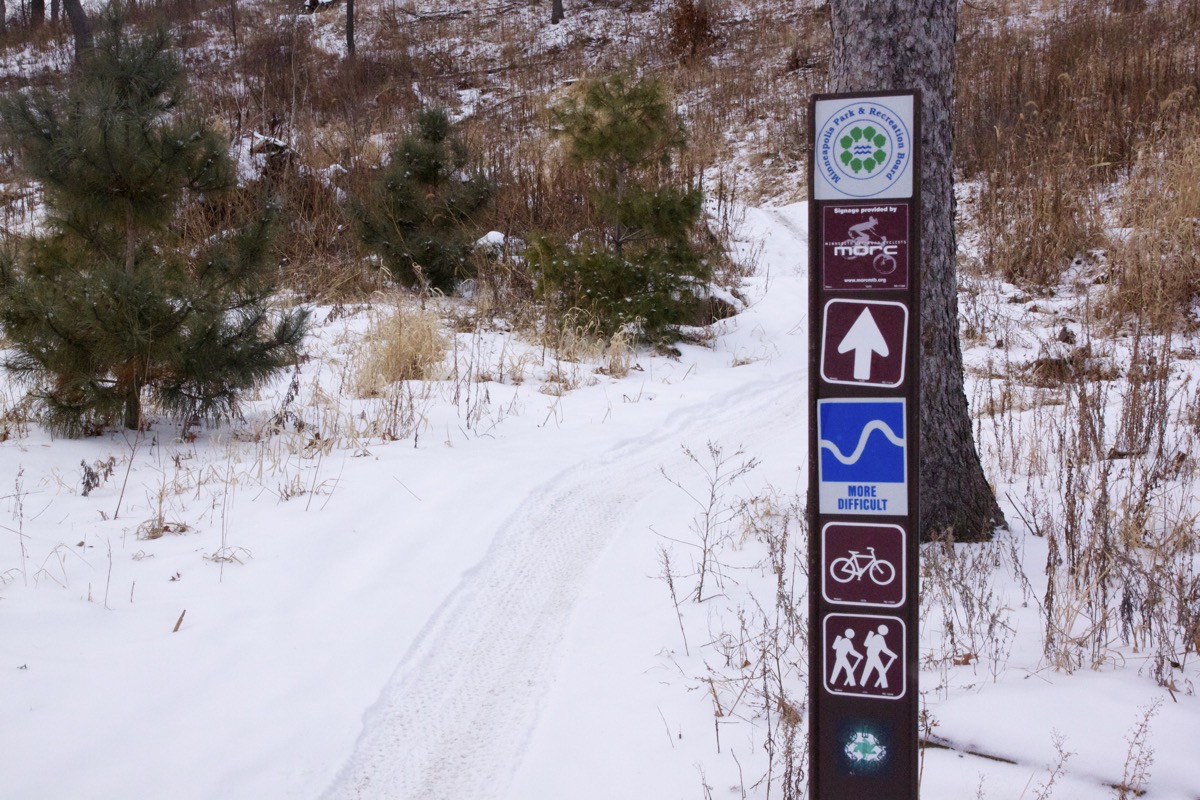 After just a couple more miles I made it to Theodore Wirth Parkway and the park entrance. I wasn’t sure where I would find the trails but after just a couple false starts and wrong guesses, I found singletrack in the newly-built Glenwood Section. As I stopped to snap a few photos I saw not one or two, but at least four riders on fat bikes, all seemingly out for solo Friday afternoon lunch rides. 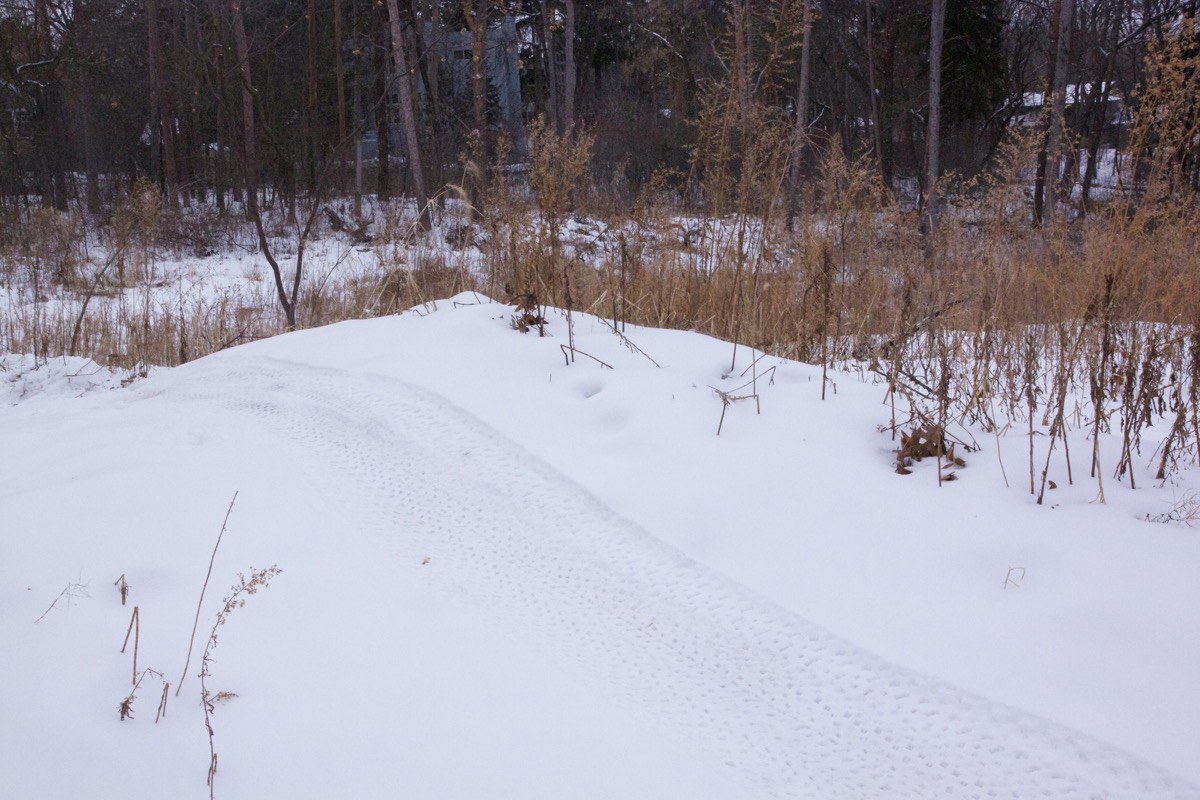 Now, I have no idea what the Glenwood Section trails at Theodore Wirth are like when they’re dry, but my guess is they’re pretty standard machine-cut flow trails with little in the way of technical challenge. But in the snow, they were perfect! If there’s such a thing as a snow-flow trail, this is it with berms and rollers, all laid out in a way that fat bike riders can easily climb and corner with ease. At the top of the loop the downtown Minneapolis skyline looms just above the trees, a sudden reminder that you’re mountain biking in a city. 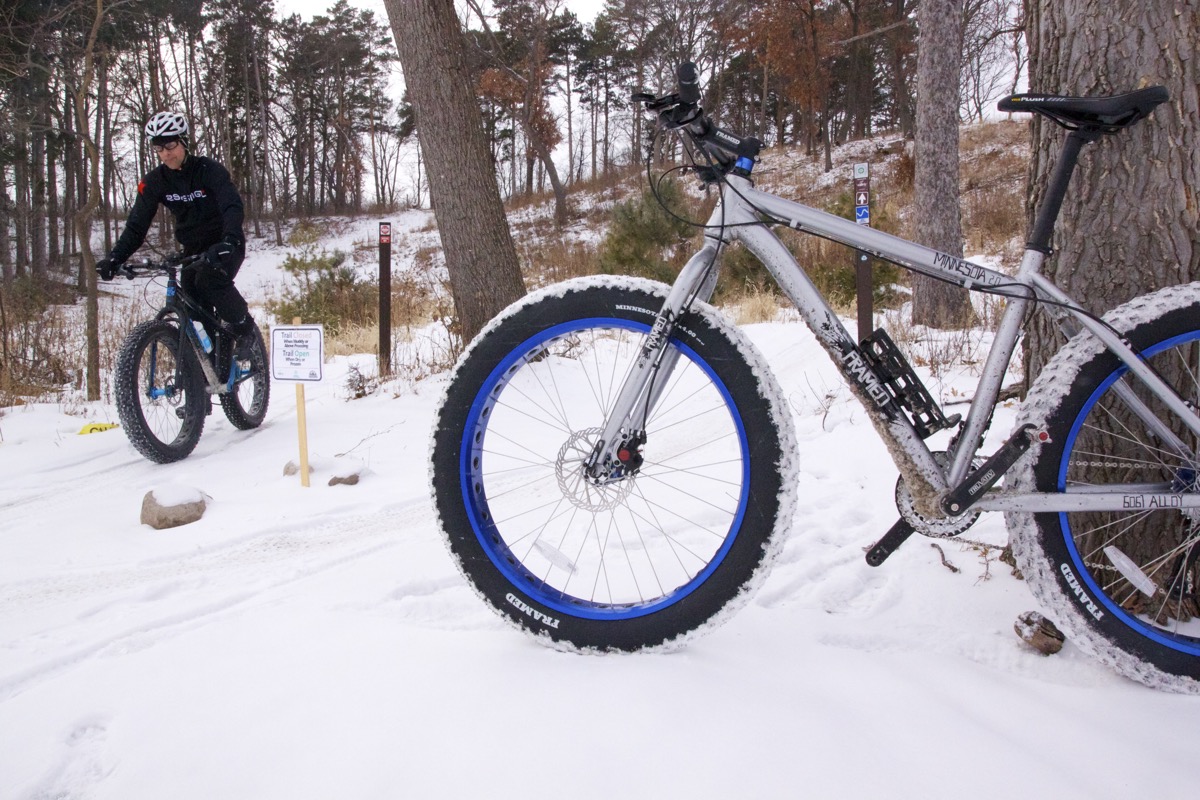 The new loop is short–right around a mile–but to me the best part is its location. Riders from all over town have access to Theodore Wirth thanks to the interconnected greenway system, and it’s hard to argue with a fun singletrack lunch loop, no matter how short.

There are more mountain bike trails located north of the Glenwood section, but I wouldn’t be able to ride them on this trip.  As I pedaled back to Lyn-Lake, I reflected on just how special these trails really are. By all logic, urban areas with frequent snow and ice shouldn’t work for mountain bike trails, and yet here they are and people are using them. Just goes to show how relentless mountain bikers can be in our pursuit of finding trails to ride!

Shout out to Minnesota Off Road Cyclists (MORC) for building and maintaining the excellent trails at Theodore Wirth!

,I will definitely need to get over to that side of town, just as soon as it drys out.

What, no fat bike? 🙂 Or is the snow already melted?

At least back home in Neillsville, everything is pretty much melted right now and trails are closed until things dry out for the spring… usually happens by early to mid May, sometimes a bit earlier. Twin Cities weather is usually pretty similar to whatever is happening in Central WI, but sometimes colder.

Hey Jeff, glad to see this. I rode all of Theo’s trails last Friday morning. They closed the trails for the spring thaw at noon. Whew! Here’s my 15-second Instagram vid:
http://instagram.com/p/0DK4iBLddc/

No fattie for me, but the snow was packed hard enough for my 2.4″ tires.

Although the Glenwood section you rode is great, you missed the newer South Wirth section, which has the best flow in the entire Twin Cities metro area, IMHO. I blogged about it last fall:
http://mountainbikegeezer.com/theos-new-south-wirth-flow-trail-best-in-the-twin-cities-metro/