If you think GoPro and Contour are the only players in the helmet camera market, think again. Last week at Interbike we got the 411 on cameras from Sony, JVC, GoPro, Garmin, and Rollei. While all five of these companies put out solid products capable of recording HD video on the trail, each has something unique compared to the others. Oh, and apparently we’re not calling these tiny cameras “helmet cams” anymore; they seem to prefer being called “action cams” now that they’re all grown up.

Sony actually came out with their first action cam last year, and this year they’re selling two models: the AS15 for $199 and the AS30for $299. Both feature wi-fi and can record in full HD at up to 60 fps. The AS30 adds GPS recording for geo-referenced video plus NFC for easy file transfers to your smartphone. 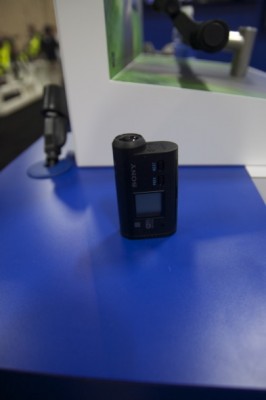 Now, what sets these Sony cameras apart from the competition is the inclusion of classic Sony tech like SteadyShot image stabilization (yes, please!) and Carl Zeiss lenses. The company offers a ton of mounting options including a dog harness mount. Seeing how much the internet loves cat videos, I think Sony could make a fortune by adding a cat mount, too. 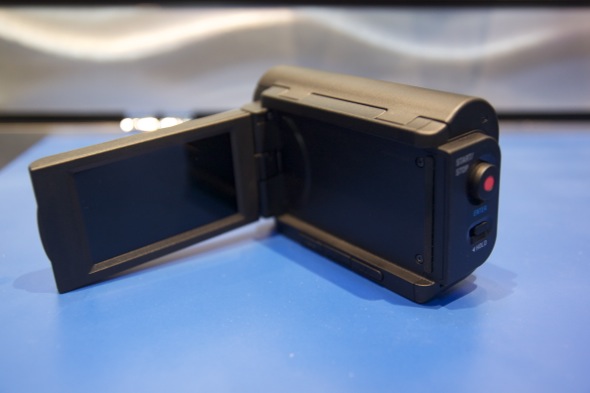 I also really like Sony’s version of the LCD “backpack.” It’s actually shaped like a mini-camcorder which makes it easy to hold for shooting fixed shots. Plus it adds a little retro cachet to an otherwise high tech action cam. 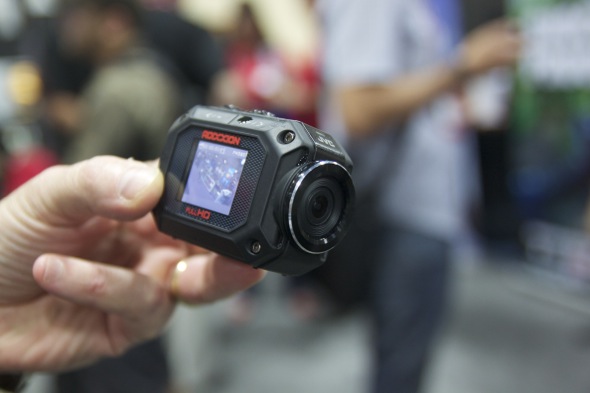 Perhaps the coolest thing about the JVC cameras is they’re waterproof to a depth of 5m right out of the box. The camera may not look like it could survive a dunk, but I saw it pitched into a bucket of water, and the camera just kept rolling. This is all the more impressive without a case around the camera. 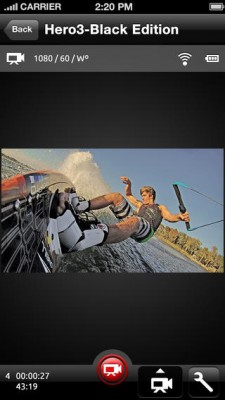 GoPro is still the 800lb. gorilla in the action cam market and with Contour on pause (we think they’ll be back), this gorilla is just eating more bananas. Greg met with the folks at GoPro and here’s what he found:

GoPro has recently rolled out several great new ways to control, manage, and edit your footage.

GoPro’s recently redesigned mobile app (available on iOS, Android, and Windows) connects to the camera via a secured wireless network that the camera itself transmits. From the app, you have a viewfinder to help get the perfect angle out on the trail. While the LCD backpack was sort of helpful with this, the mobile app is even more helpful. Even if you’re out on the trail, by yourself, with no one to look at the camera on your head, you can easily see what the camera is looking at without taking your helmet off.

The app also provides many other features, including instant review of recorded videos, the ability to transfer videos and photos wirelessly from the camera to your phone, and the ability to adjust all of the camera’s settings without having to click through complicated, lengthy menus.

Also brand-new from GoPro is their Studio 2.0 software. I think GoPro has realized how much crappy, unedited POV videos suck, and are trying to do something about it. The new editing software is simple, unintimidating, and offers a template function based on popular GoPro commercials, allowing users to easily create “banger edits.” According to Chris Kinman, Media Relations Expert for GoPro, their new software and app focus on “taking the pain points out of sharing the content that you have created.” That’s a goal I can get behind. 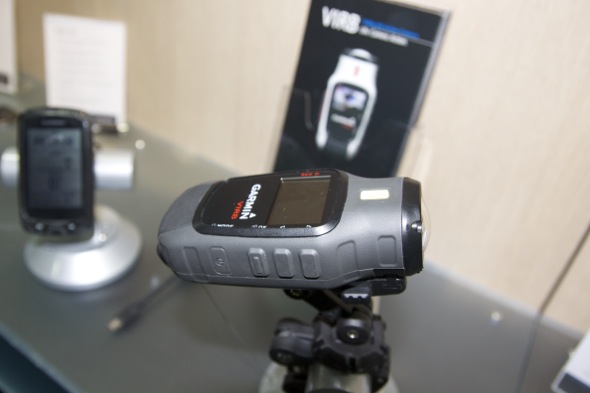 It turns out, the company knows a thing or two about wearable electronics and GPS (go figure), which is a big part of helmet cameras these days. But what excites me the most is the connectivity between select Garmin Edge units and the new VIRB. Not only can riders control their helmet cams via an Edge device mounted on the bars, but an upcoming Garmin watch will also act as a remote control. I’m a little bummed we had to wait so long for this–I actually raised the possibility of connecting a Garmin GPS to a helmet camera back in 2007–but I guess it’s a lot easier to dream things up than to actually produce them. 🙂 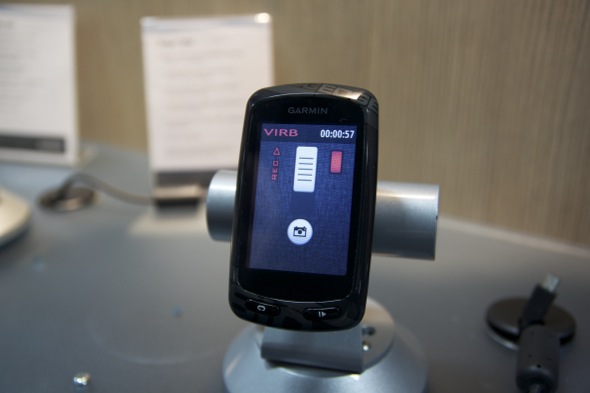 The entry-level VIRB will be available for $299 while the VIRB Elite is priced at $399. The Elite version adds its own built-in GPS receiver so you can actually mount the camera to your bars and use it as a fully functional GPS unit. 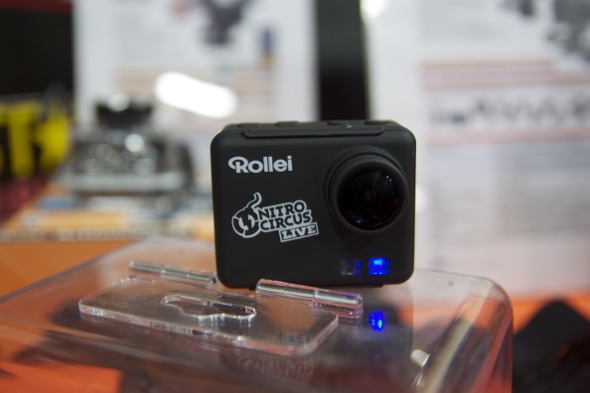 Rollei is a German company that’s been producing camera tech for decades, and their action cameras have already been used in television production (the company even offers a Nitro Circus branded camera). The cameras feature all the standard stuff you’d expect: full HD recording, wi-fi, waterproof cases, and LCD add-ons. 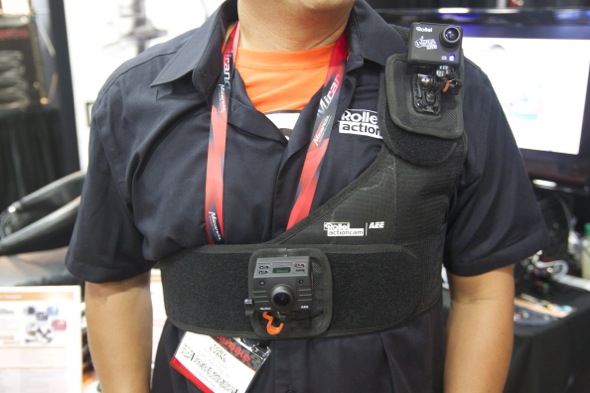 But perhaps my favorite thing about the Rollei is their implementation of the chest mount. In my experience, chest mounting produces the least shaky video for mountain biking and Rollei’s chest harness really opens up a ton of options. Velcro on the chest straps mates up to a velcro mount on the camera for shoulder mounting, chest mounting, and everything in between. Of course I’d love to see some velcro on the back of the harness for lead cam shots but, adding that wouldn’t be too difficult to DIY.

We also saw a ton of companies, including helmet manufacturers and brands in the component business, offering helmet camera mounting hardware. I was particularly interested in the seat rail mount from K-Edge pictured below. 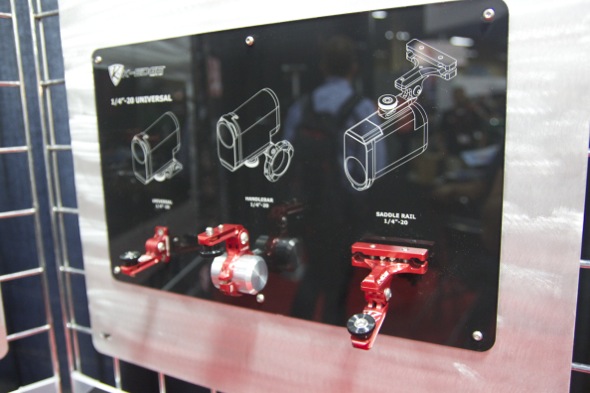 We plan to get hands-on with many of these helmet cameras this year,so stay tuned for more in depth coverage.

Which camera sounds most interesting to you?

Community
You Don't Have to Love Suffering to Mountain Bike, But...
Gear
Quick Question: How Can I Tell Which Suspension Platform a...
Trails
The Newest Mountain Bike Trails [April 2021]
Gear
How Do Carbon Mountain Bike Frames Break? Shawn Small of...
Subscribe
Login
Please login to comment
4 Comments
Most Voted
Newest Oldest
Inline Feedbacks
View all comments

They all have cool features that have buffered my initial knee jerk reaction to get into a market that GoPro clearly dominates, but I still think that GoPro has the best overall camera design and superior functionality with the ability to control and view images via the smartphone (better than on the device itself of course). Adding editing apps is the icing on the cake…I, like many, have a virtual vault of fairly boring footage of kickass rides that I basically never did anything with. Even though I am one of those guys that doesn’t let the camera roll for more than 10 seconds usually, I find it too time consuming to edit my awesome ride into a short video-book complete with Motley Crue throwback soundtrack that I can share on social media. So, kudos, GoPro. Maybe I can finally clean up my hard drive a little….: )

Smartphone integration is another thing that’s becoming pretty standard, though in my own experience this can be buggy. If GoPro simply makes smartphone pairing consistently rock solid, I’m sold!

Stay tuned for a review of their app integration. I need to do more testing, but so far it’s been pretty painless.

even tiny handheld still cameras have image stabilization. for motion, especially unsteady terrain of mtn biking, image stabilization is essential. this is a no-brainer. the biggest pain with the gopro is getting a steady picture when the terrain gets funky. gopro will be late to the party on this one if they continue sans stabilization. i don’t care what kind of editing software they create, shaky junk in = shaky junk out.