One of my first stops at Interbike this year was SUGOI. Having recently reviewed their RSX shorts, and with a review of their RSX jersey already in the works, I was interested to see what improvements they would offer on their previous products heading into 2014.

The RSX short has been seriously improved for this year. Instead of the regular chamois, which was already fantastic, SUGOI has swapped it out for lightweight mesh bibs. Still designed to be used with the short and not as a standalone, the bibs are certain to provide additional security and comfort for all-day efforts.

Also, if you remember from my review of the 2013 RSX short, my only real complaint was the fact that the liner was stitched right into the shorts, and had to be cut to be removed. Well, it seems that SUGOI was on the same wave length, and they’ve added a snap system for 2014. 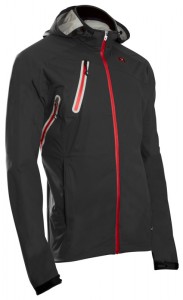 New for 2013 is the NeoShell Jacket. According to SUGOI, the NeoShell is “the world’s most breathable, waterproof cycling jacket.” SUGOI partnered with POLARTEC to create the NeoShell jacket, and this exclusive technology allows the jacket to be 100% waterproof while also being superbly breathable.

SUGOI had a pretty sweet demonstration setup at Interbike (pictured below). Two chambers were set up, one featuring the NeoShell and one featuring a “competitor.” In each chamber, each jacket had air below it and water above, and no water was dripping through. So, each jacket was waterproof… but what about breathability? To show the difference, they used a hand pump to pump air into the lower chamber. The air bubbled straight through the NeoShell jacket, but the “competitor’s” jacket just bulged up and didn’t let any water pass through. (Check out the video below for a visual.) Of course, it’s just a rigged-up demonstration in a booth, but it was pretty cool to see! 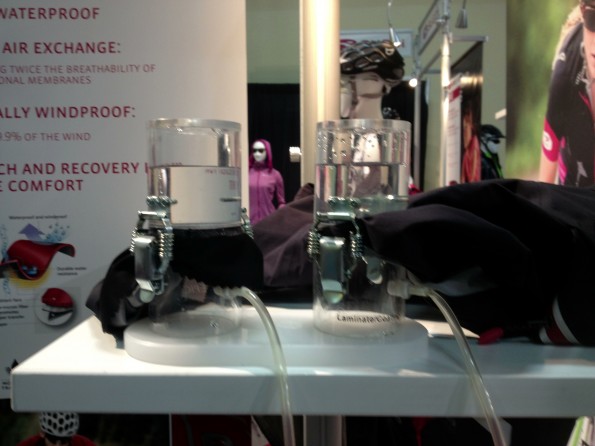 For more information on SUGOI’s new NeoShell, check out this video: