If you’ve been paying attention to Singletracks lately, or the mountain bike industry in general, then you’ve probably noticed the influx of long-travel 29ers. They’re all over the Enduro World Series and World Cup downhill races and are filling up bike shops. Racers are switching to big wheels for a lot of tracks and consumers are making it their one and only.

A few years ago, people were still arguing whether 29ers belonged on a mountain bike, and that argument was quelled some time ago. Now that engineers have figured out how to pair massive travel with the big wheel size, things are really getting interesting.

Ibis debuted their Ripley and Mojo mashup in the spring this year. It had the Ripley’s big wheels and the long-travel attitude of the Mojo. For Ibis fans, the Ripmo was long-awaited, while for others it was a conversation piece. 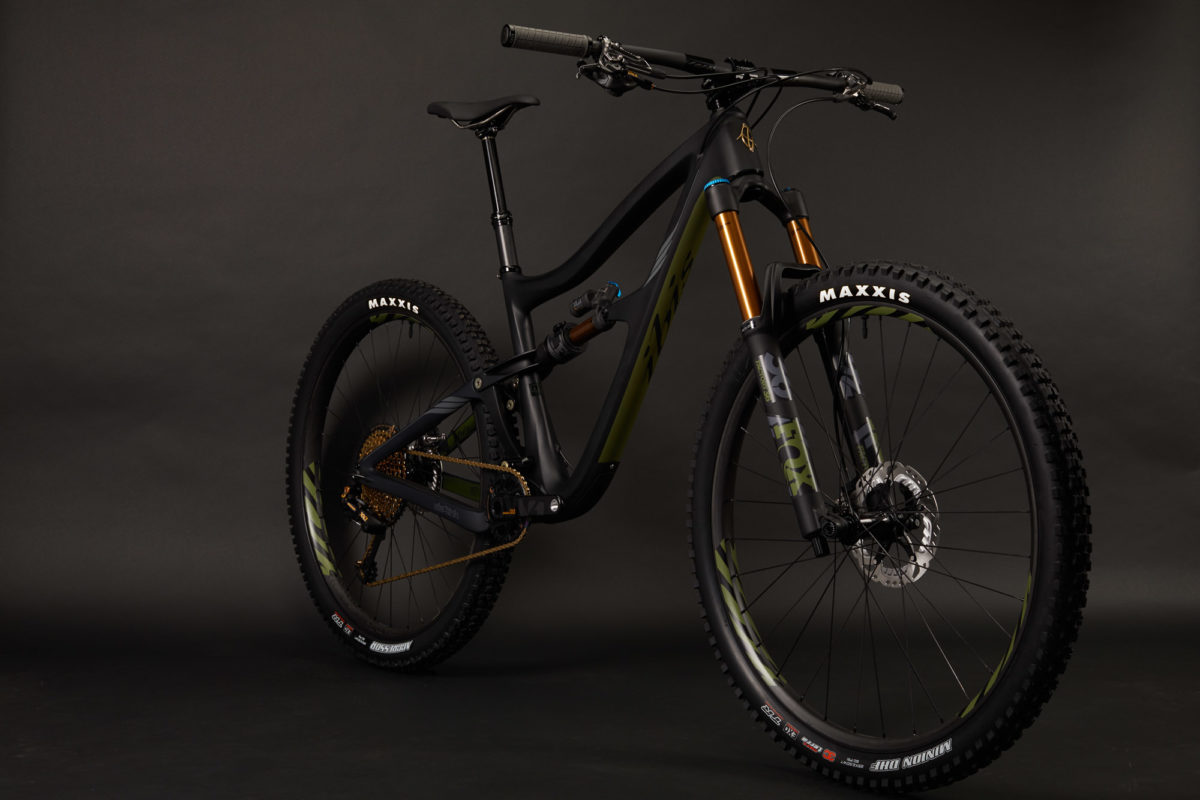 Ibis didn’t just upsize the Mojo, though. The reach is nearly an inch longer on the Ripmo, and they’ve done some interesting things with the geometry, like tilted the seat angle to a steep 76-degrees for improved body positioning on the climbs. Ibis also used a 44mm fork offset on production models to make the bike feel even slacker than 65.9-degrees while keeping a reasonable wheelbase.

Buy the Ripmo from JensonUSA

For 2019, Pivot took their already beefy, 170mm specced enduro bike, overhauled it – again, and put it on 29-inch wheels. The Firebird 29 was born this July, and it’s one big bike.

The tubing is thick and aggressively shaped with racy, straight lines all the way from front to back. Pivot of course keeps the DW-link, and reduced the 170mm of rear travel to 162mm. A 170mm fork is still specced in front. The head angle and seat angle are 65.5 and 75-degrees, respectively. This is also adjustable via different geometry modes.

There’s no mistaking that the Firebird is a gravity-oriented bike made for going very fast downhill.

YT is on a roll with their bikes. So much so, that they’ve been sold out of most of their carbon fiber Capras for a while, and there doesn’t seem to be any relief in sight.

The all-mountain bike was previously a 650b machine until YT debuted the newest generation with the option to buy it in either wheel size. 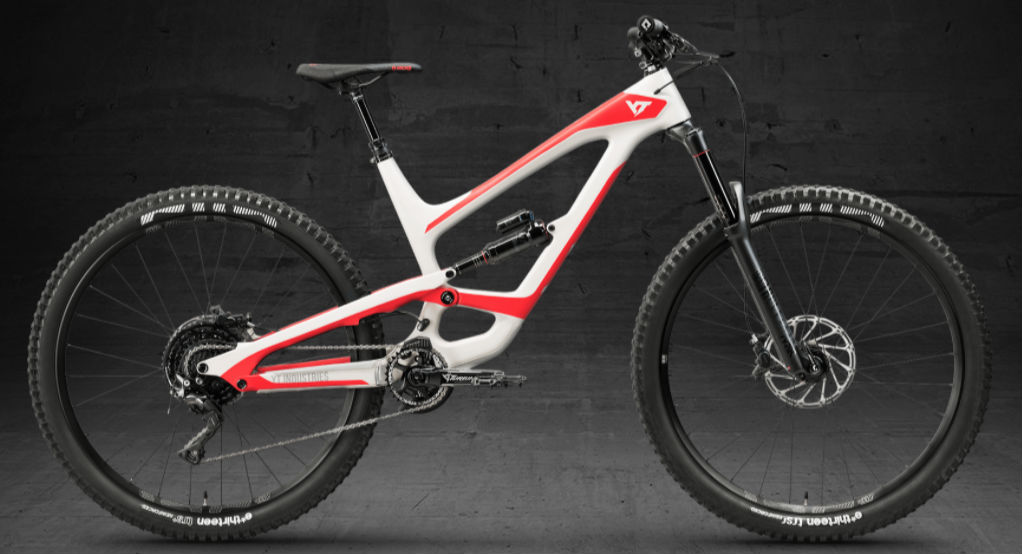 As a 29er, the Capra comes with a 65 to 65.5-degree head angle, depending on the geometry mode and a 75.5 to 76-degree seat angle. The travel is stock with 170mm both front and rear, but on the top-tier, CF Pro Race model that number jumps to 180 — less than an inch of travel than what is usually standard for downhill bikes.

The Trek Slash 29er isn’t exactly new for this year, but the Slash was one of the earlier long-travel 29ers to break into the market and got people talking about big wheels in enduro racing.

Trek did debut an aluminum model of the Slash this year though, at a lower price point than the carbon version.

Trek showed what was possible with big wheels, big travel, and modern geometry. The seat angle is an effective 74.1-degrees and the head angle is 65.6-degrees.

The Slash 29er set the bar for long-travel 29ers when it was released two years ago.

The all new Scott Ransom came out in late-August with 170mm of travel front and rear, adjustable suspension rates, and the option to switch between 29- and 27.5-inch wheels. Brands talk a lot about revolutionizing mountain biking often with new releases. While the Ransom doesn’t quite revolutionize the sport, it does show there are a lot of possible options with one bike.

Scott partnered with Fox for the rear Nude TR shock on the Ransom. A ramp control switch changes the suspension curve from linear to progressive and vice versa. The geometry is also adjustable with half-degree changes to the seat and head tube.

It appears Yeti has axed their popular, 29-inch-wheeled SB5.5 for the new SB150. 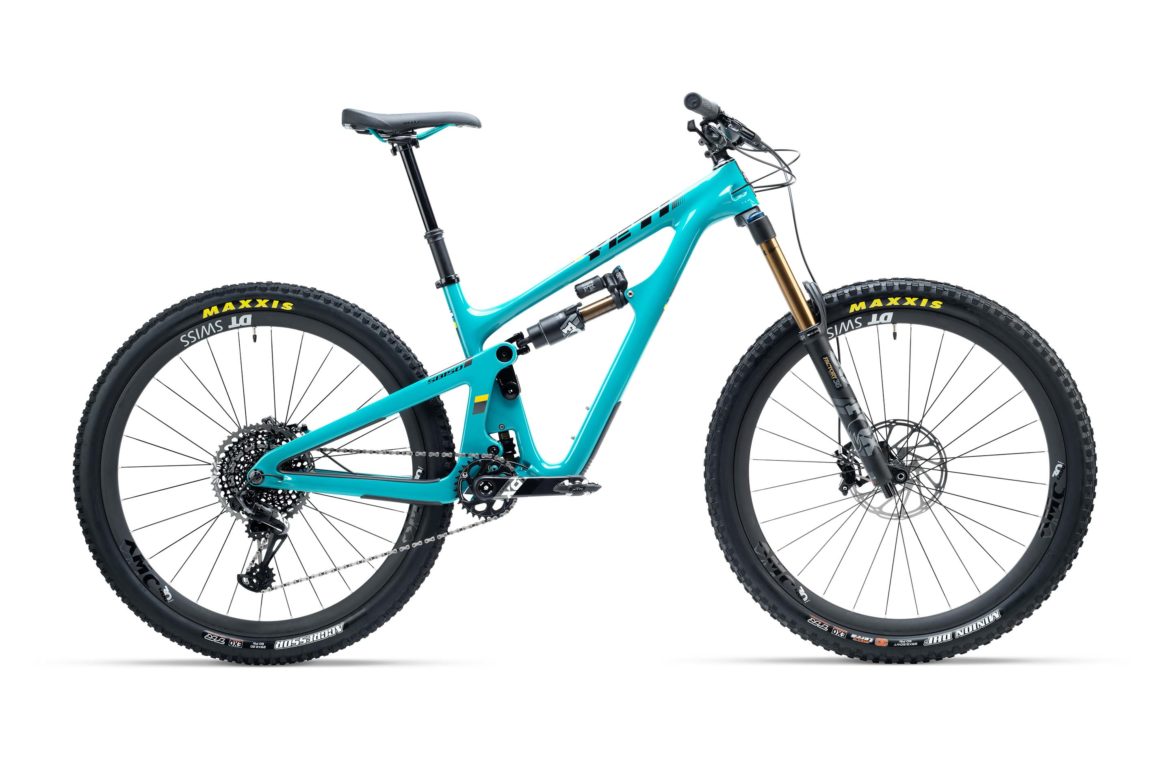 Yeti finally made it possible to fit a water bottle inside the front triangle by using a shock extender to move the rear shock upward in the triangle.

Richie Rude has already taken a win on the SB150 at the California Enduro Series at Northstar. It seems the SB150 will be his primary weapon of choice for 2019.

The Wilson has long been a staple for the Devinci World Cup athletes. The bike has seen World Cup titles, most notably with the late Steve Smith, and is a favorite for Canadian bike park rippers.

In order to sweeten the pot even more, Devinci released the 29er version of the Wilson this summer.

The 29er version isn’t dramatically different than the 650B Wilson, but accommodates riders who want to carry even more speed through the bike park.

The geometry is adjustable and the head angle changes from 62-degrees to 62.5-degrees. The Wilson uses the split-pivot platform, which Devinci is known for, and it keeps the aluminum front triangle and carbon rear triangle.

The GT Fury is brand new for 2019, after a five year run on the previous platform.

The bike still comes in a 27.5-inch option, but the 29er is of course driving most of the conversation.

We took the 29er version out for a day in the Whistler Bike Park and were impressed with how playful it is, even with 29-inch wheels and close to 200mm of rear travel. 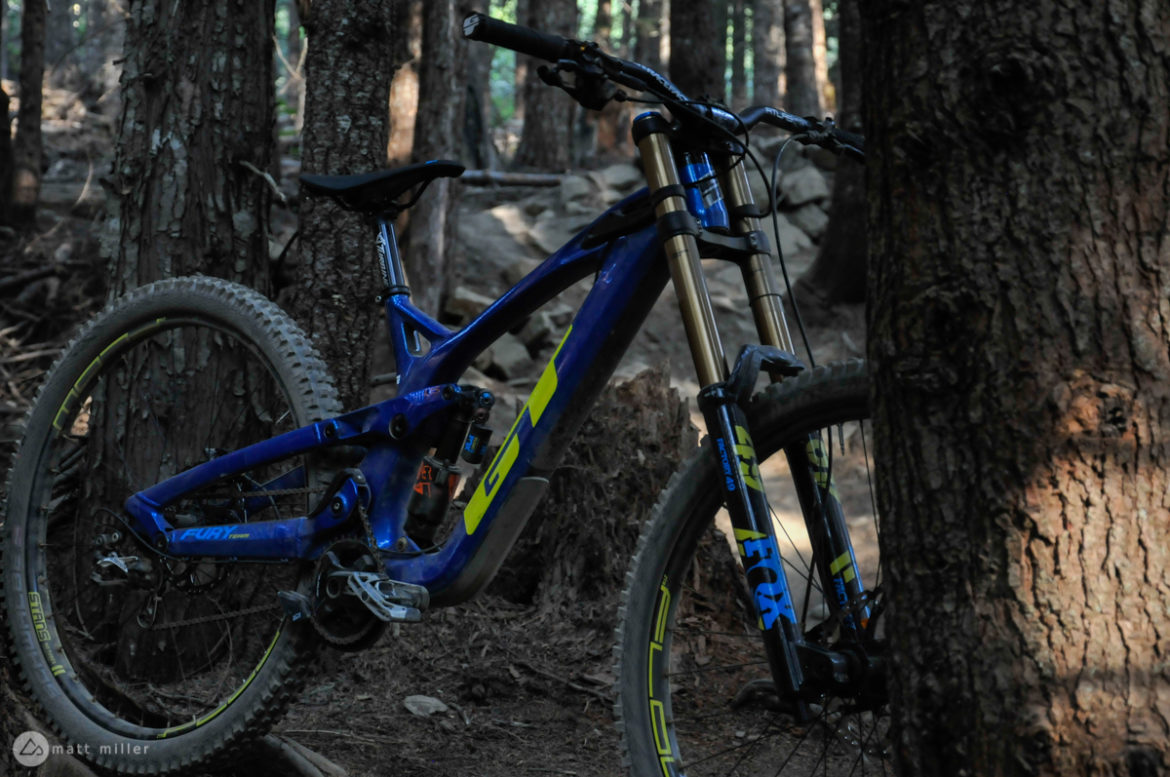 A swap kit is available if buyers purchase the frameset. This allows riders to change the wheel size back and forth from 27.5-inch to 29-inch via a seat stay and headset cups.

Which bike on the list are you most excited about? Do long-travel 29ers seem like the next trend for the industry? Leave a comment and let us know.

I would be pumped to ride any of the single-crown bikes on the list! I like to pedal, so the DH bikes are out. It would be hard to find a reason to turn any of them down, and the SB150 or Transition Sentinel may be at the top of my personal list.

I hope that long travel 29ers are more permanent than a passing trend. Shorter travel trail-bikes are so capable now that it is nice to have a really big and burly bike like these as the next option in the gravity scale.

Thanks for putting these together, Matt!

How about thr NS Define and Marin Alpine Trail

The long travel 29er mountain bike with 29×2.6 or wider tires is the future of Mountain biking and here’s why. Long travel no longer pays the penalty of poor climbing, excessive weight, or inefficent pedaling. Modern suspensions and enduro geometry have solved most of those problems. Why not have long travel if there is minimal downside. Wider Plus tires provide increased traction and flotation. Tall 29+ wheels have amazing roll-over. Long travel handles the roughest most technical trail surfaces. All these features in one bike combine to make the most ride-able bikes every made and not just for highly skilled enduro pilots but also for the typical weekend warrior trail rider. Why not use every technological advantage to have the best riding experience possible. Some might say it dumbs down the trail but I think it ups the fun factor.

Plusbike Nerd, you might be right about 2.6″ tires. It seems like that size has found a good fitting. Wider than that though, I’m not sure. In recent talks with wheel builders and tire brands, many have had sharp declines in sales of their plus size tires and wheels. It sounds like there’s been a sharp decline in demand for them in the past year, and at least a couple are considering doing away with their offerings.

Thanks for that, good catch

@ Matt
I don’t know how much about the sales Plusbikes are getting but I see many riders where I live riding Plus tires – maybe about 40%. I don’t think the original Plusbikes with 3.0in tires and i45mm (i=inner width) rims were quite ideal. However, bikes with i30-35 rims and capable of using tires in the 2.4-2.8 range are ideal. I call this type of bike a Tweenbike – as in between Plus and Narrow. The 2019 Specialized Stumpjumpers in 27.5 and 29 are Tweenbikes. They come with 2.6in tires and i30rims but are able to use 2.4 and 2.8 tires also. Consumers shouldn’t have to choose between Plus and Narrow bikes but only between Plus and Narrow tires. The Trek Remedy, Slash, and Full Stache are Tweenbikes. The Scott Genius in 27.5 and 29 are Tweenbikes. I’m sure there are plenty more Tweenbikes out there. Smart bike companies haven’t stopped making Plusbikes they’ve just started making Tweenbikes. Because the 2.6 tire is the mid-Tween tire size doesn’t mean it is the best and only tire size for every rider. It is just easy for bike companies to use. A new bikes got to come with tires on it – right. In fact, a bike with i32 rims could reasonably use 2.3-3.0 tires if the bike had some way to adjust the bottom bracket height like flip-chip suspension or an eccentric bottom bracket. Personally, I think a 2.8 tire mounted to an i32 rim makes the perfect trailbike wheel – still plenty wide but not nearly as heavy and slow-rolling as a 3.0/i45 wheel. However, you might like 2.4 tires but we could both ride the same bike with the same rims and we could both be happy. If I was buying a new bike, I would want a Tweenbike. Bikes that are only capable of using Narrow tires or only capable of using Plus tire don’t make sense. Why not get a bike that can do both?

Hey Plusbike. I concur on the tween-bikes or mini-plus. One of the first bikes to get great reviews going with the 2.6 tire (instead of a larger plus) and on a wide rim was the Ibis HD4. It got stunning reviews for its plus advantages without the sluggishness. I have test ridden a few plus bikes, and I am definitely settling in on the 2.6 range tire. If your priority is looking as much like a mad man as possible ripping down the mountain and yet you still want to be able to climb back up, then this 2.6″ range seems to be the sweet spot (at least at the moment). If you want to fly up the mountain like a deer bounding through the forest, then the mini-plus is probably not the bike one should consider.

I agree with mongwolf. It really depends on the terrain and the rider’s needs. Just having ridden out in Tahoe with lots of climbing/descending in rocky and sandy terrain the 2.6 was excellent. I wouldn’t have went to go any wider – at least on the ascents – and not sure it would have made any difference (for me) on the descents. In less technical terrain or hard pack I wouldn’t go wider that 2.4 (max) as the bike just feels more sluggish to me.

Matt, this is a real interesting topic/trend. While I’m not sure it would make a list of “long” travel 29ers I have to say I am very intrigued by Evil’s new The Offering (140/140 but can be adjusted to 150-160 upfront). I am really intrigued by the geometry and may just need to pull the trigger on this one!

That one does look sweet! I rode an Evil for the first time this summer and it was maybe my favorite bike I rode all year.

Matt, I was surprised you didn’t have an Evil bike on this list.