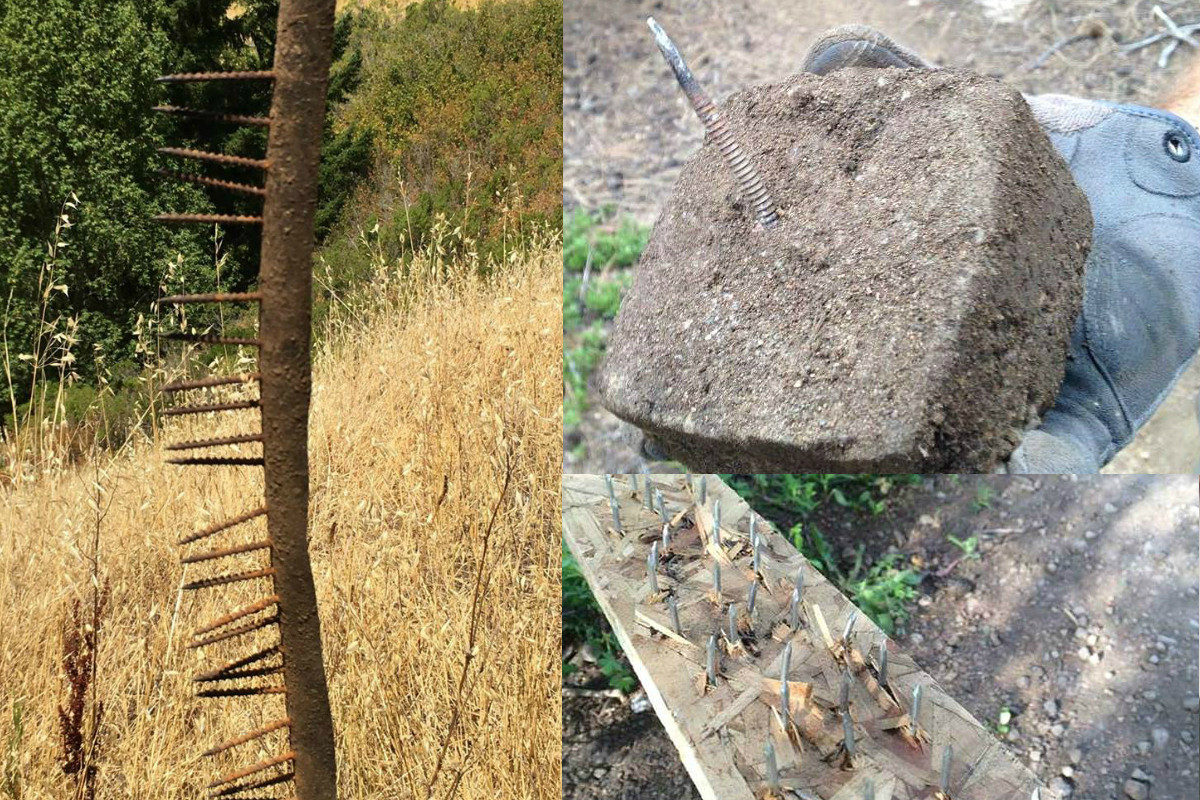 As I wrote my fourth article about trail booby trapping this summer—four instances of booby trapping in four distinct locations, mind you, and only the ones that I’ve personally written about—I found myself wondering, “at what point would I want to physically injure another human being?”

Now I’m sure plenty of people would say, “Physically hurting another person is never acceptable!” and I’m not necessarily saying that it would be. Rather, I’m wondering, at what point would I feel like hurting someone else?

I came up with a very short list. I might feel like injuring another human if that other person did one of these things to a member of my family, someone I know, or myself:

But the thing about this list is, in all of these instances, my retribution would be against a specific person for a specific action.

So my next question was, “at what point would I want to physically harm or kill a person at random, even if I could target a specific group of people?”

And guys, I’m coming up with nothing.

So what is going through these peoples’ heads?

Trail booby trapping isn’t a one-off occurrence and it isn’t isolated to one specific area—it happens all around the world, and has been taking place for years. So what exactly is going through the heads of the people who lay these traps?

Honestly, as I searched my own soul, I realized that I personally have no way to relate to this level of hatred. So instead, I need to look outside of myself.

The possible result of many of these booby traps is serious physical injury or even death (metal spikes and neck-high fishing line). As such, we shouldn’t even grace these people with the dignity of assuming that they are normal, emotionally-stable human beings.

Don’t believe me? Let’s dig out the dictionary:

terrorism: “the use of violence and threats to intimidate or coerce, especially for political purposes.”

So when I wonder, “How much hatred do you have to harbor in your heart to want to physically injure or kill a mountain biker, just because they’re riding a bicycle?” the answer is: the same amount of hatred that it takes to conduct a mass shooting at a school.

The same amount of hatred that leads someone to plant a bomb near a marathon finish line.

The same amount of hatred required to attack a train full of people with an axe.

The same amount of hatred needed to willfully ram a crowd of people with a car.

The same amount of hatred that inspires a lynch mob.

The same amount of hatred that leads to all of the horrific headlines that we read on a daily basis.

But is trail booby trapping treated as terrorism by the press and the authorities? No, no it’s not. Instead of being treated like terrorists, the perpetrators are treated more like vandals whose actions might unintentionally have gotten someone hurt.

Take, as evidence, the woman who was indicted in a years-long trail vandalism debacle in Vancouver. She received three years probation, some community service, and a slap on the wrist. (Source)

When caught, we need to treat these people differently.

Instead of treating them like harmless vandals, we need to treat the people who lay dangerous trail booby traps in accordance with their true nature: terrorists. They need to be prosecuted to the full extent of the law. They need to be locked away where they can’t harm anyone else.

Because we’re not talking about a mere disagreement over who should be allowed to use a specific trail, here. We’re talking about a level of hatred and mental derangement that is the absolute antithesis of civilized society.

Some people simply should not be allowed to continue as members of our global society. And trail terrorists are among them.

Trails
The Envy of the PNW: the Organization and Woman Behind...
Mountain Bike Podcast
Is There a Trail Terrorism Epidemic? [Podcast #65]
Trails
Punji Stake Trap Discovered in the UK
Culture
Over a Beer: Mountain Bike Rides Are No Complaining Zones

Gear
The Shimano GRX Drivetrain Brings Familiar Mountain Bike Tech to...
Progression
Sizing Up or Down Plus Handlebar Widths and Crankarm Lengths:...
Gear
Never Underestimate the Power of a Good Zip-tie
Gear
You Have $5,000 to Spend on a Mountain Bike. Which...
Subscribe
Login
Please login to comment
10 Comments
Most Voted
Newest Oldest
Inline Feedbacks
View all comments

It all comes from our society’s tendency to dehumanize one another. If someone or some group isn’t truly human then it’s easier to do them harm. No amount of jail time or punishment will change this simple fact. Examples. “Radical muslims”, “Mexican rapists”, “N____ers”, “Ahole Mtbers”, “feminazis” “damn homos”etc. any and all of these terms are simply used to dehumanize any group of people that is viewed as “other” than yourself. So now that we respectable Mtbers find ourselves the unenviable position of being viewed as “other” and subjected to hate driven crimes it’s time to take a step back and realize that you can’t treat the symptom. You’ve got to treat the whole diesease. Sadly when you’ve got people in the highest echelons of our society, like our president helping to lead the charge against the “other” this trend is going to continue. Until we stop dehumanizing one another in order to make it easier to do each other harm, economically, physically, mentally, or all three there is simply zero hope that things like trail traps against those “shit head mtbers” will stop. Sadly xenophobia is genetically hard wired into us because we’re nothing more than slightly better chimps. We share over 96% of our genetic code identically with those primate relatives of ours. Their entire social structure is in fact based on tightly knit bands living together sharing xenophobic hatred of the “other” band of chimps living in the next patch of territory. Sorry if that doesn’t sit well with a lot of you. But our behavior isn’t much different.

BTW: some of us here actually do other things besides just mtbing… I occasionally do trail running.. and a I MTB too but, most trail runners probably don’t MTB.. just sayin!

It seems like they should be charged with attempted murder since it is also per-meditated.

In certain circumstances this should be considered imo. The case could be made for this agreed.

I feel the same way on my road bike. Cars swerving and honking to intimidate. And a few times a year people are getting pegged, on purpose. And I live in a bike friendly area (Madison, WI) but people in cars feel self righteous.

Can’t comment on the fishing line people (that’s beyond messed up) but guessing the spike strip people don’t think about injury, only about causing tire damage and ruining bikes (not understanding how mountain biking actually works.) I don’t get it. I see so many comments about a-hole mountain bikers but have never witnessed one, guess we’re nice in the midwest.

Martin, I cannot leave your post left unresponded to. There is some excellent thought. However there is also some incomplete thinking which is common today inour society today and leading us towards a lawless society.

I concur that jail time alone isn’t likely to rehabilitate. Some intentional programming in that direction is most certainly needed. HOWEVER, if the penalty under law is high enough (and consistently enforced by judges), then jail time is a deterrent towards PREVENTING crime in the first place … which is one of the most important things we are after in this situation and most ever situation … … the PREVENTION of crime. If we follow your thinking as stated, then there should be no jail time punishment (loss of freedom) for any crime whatsoever …. just rehabilitation (and recompense). I hope you can see that this would not be good. Punishment and jail time both have a place in maintaining a civil society as a deterrent.

And I’m guessing to create real determent that we actually need greater consequence built into our laws again (or enforced by judges). We have become too lax imo. There is no respect for our laws because there is little consequence. This is true of our politicians, even the very highest in our land today, all the way to kids on the street in the inner city.

Also don’t you think that rehabilitation is probably more effective, when the criminal knows that he faces even greater punishment if he doesn’t follow what he being taught and he repeats his lawless acts? I think rehabilitation is set up to be most effective when there are laws that clearly and strongly reinforce the need to rehabilitate.

Next, this all needs supplemented with outstanding parenting that employs both love and consequence to model and teach our children respect for others and respect for laws. No amount of legal punishment nor government rehabilitation efforts are going to transform a society with inadequate parenting. Whether some want to admit it or not, good families are the backbone of a good society. I live in the country of Mongolia. Mongolians have a saying, “If the father is good, the family will be good. If the family is good, then the nation will be good.” It’s a hard proverb to argue against.

Finally, Martin, on a positive note, I am glad to see that your comment gives consideration to the victim and/or their families. This is called justice as you obviously well know. If someone has taken your loved one or severely injured you or your loved one, even stolen your property, it is only proper that the criminal should somehow directly pay some recompense to you or your family for your loss. Because our legal system is weak in this ethical area, victims have had to pursue lawsuits to be rightfully recompensed. Is there place for forgiveness? Most certainly. But this does not nullify the properness of recompense also. It should be both. Our laws are weak in this area as is your comment eludes to.

Wow, Greg, hard to argue against your rationale. But hey, we allow terrorist of terrible kind to roam free in our country today, so “what the hey”. We are dealing with a general problem much larger than our mountain biking issue. We are dealing with a degradation of our society and subsequent lawlessness that comes with that. Lawlessness by the citizens, and the politicians and the courts. If Americans don’t wake up soon, we will have lost a great treasure granted to us.

Good comments.
We need to listen carefully for local criticism of mountain biking. Take even the mildest criticism seriously and try to satisfy the critic that we will try to meet them half way. Be sympathetic, even if it seems a frivolous complaint –it may fester away, unbeknown to us.
If we are vigilant, sensitive and as accommodating as possible, we may avoid some of the problems, at least.