Shimano has just announced a brand-new action sports camera, dubbed the CM-1000. This is Shimano’s first product from its new Lifestyle Gear Division.

This brand-new camera has reportedly been in development for years. It features a 16MP sensor providing 1080p HD video, with 135 degree and 180 degree modes. The camera weighs in at 86 grams and is smaller than a standard deck of cards.

Unlike the GoPro, this camera is waterproof to a depth of 10 meters, out of the box, with no external case required. Similar to the GoPro, the CM-1000 features WiFi connectivity and mobile app integration. However, unlike the GoPro, the new Shimano cam can connect to bicycle computers and other Shimano accessories featuring Di2 technology.

There are already a number of different mounts available, although not nearly as many as the GoPro. 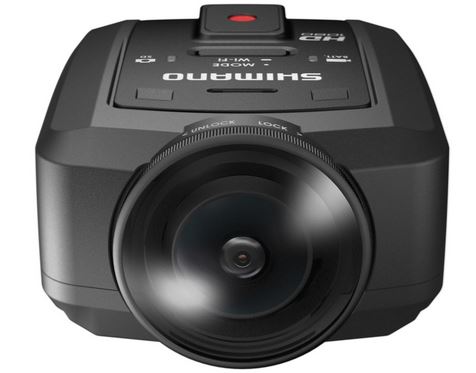 While it’s great to see GoPro getting a little competition, I’m not certain how Shimano thinks they’re going to do well in this market. If it took them this many years to develop their first camera, are they going to be able to keep up with the rapidly-advancing POV camera giant?

Also, I’m not sure who comes up with the names for Shimano, but they really need to work on something catchier for their products in the American market. As if their drivetrain components weren’t poorly-named enough, who’s going to remember a camera called the “CM-1000” ?

Finally, while I want to see someone compete with GoPro at least a little bit, if a company is going to do so, they’ll need to come in swinging. While the CM-1000 has some unique features, they’re entering the market with a serious video quality disadvantage: the GoPro Hero 3+ Black Edition can go up to 4k, which blows the CM-1000’s mere 1080p out of the water. Even at a measly 1440p, the Hero 3+ Black can shoot at up to a mind-blowing 48 FPS… meaning the top-end GoPro can shoot slowmo footage at a higher resolution than the brand-new Shimano CM-1000 is even capable of recording. However, the CM-1000 is inline with the Hero 3+ Silver Edition, which maxes out at 1080p.

Now, if Shimano could crank these cameras out for an MSRP of $100 a pop, they’d be in business. But projected retail is actually $299–in line with the Hero 3+ Silver Edition.

While this new camera has some real advantages over other products on the market, there are disadvantages as well. It will be interesting to see how this plays out….