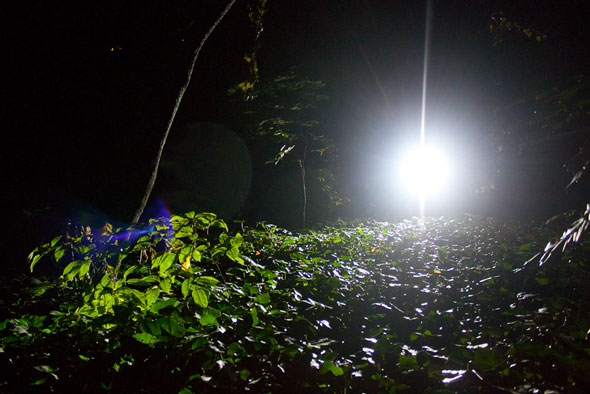 Night riding season is approaching (if it hasn’t hit your area already) as we switch our clocks back on November 4. Normally I’d write a wordy post about why night riding is so amazing or I’d share some tips for getting started but you already know all that stuff. Instead, I’ll share some of the strange sights from my weekly night ride over the past couple years. If you start riding a lot of singletrack at night, chances are you’ll come across some weird stuff too!

Ah, summer time–when love is in the air! It’s not unusual to find couples ducked into secluded wooded areas for a little romance, especially during the summer months. Everyone from teenagers to grown men and women can’t help themselves but I wouldn’t recommend getting busy right in the middle of the trail where night bikers are known to roam. Reading this you might think seeing a pair of partially nude people in the woods would be hot but it’s really more shocking than anything else.

I’ve lost count of the number of homeless people we’ve encountered during our night rides. At this point we sorta know where to be on the lookout but sometimes sleeping people pop up in the most unexpected places.

Like the time our friend Joseph speed-hopped a lump in the trail, only to realize it was a person sleeping on the Beltline (did that really happen?!). Or the time coming back from post-ride pizza we encountered a young-ish guy snuggled in his sleeping bag in the middle of a cut-through trail alongside the MARTA tracks (he sat up and moved to let us through).

Sometimes we don’t actually see anyone on the trail but we can sense that they’re nearby after seeing their belongings scattered in the bushes or catching a whiff of their cigarette. Finding smouldering bum fires in dark areas of the city is a sobering reminder that homelessness is a real, everyday struggle and each of us are blessed to have a warm place to sleep after a cold night ride.

Goats on the Trail

On a recent night ride this summer I was in the middle of the group when I heard dogs barking up ahead. Barking dogs aren’t unusual at night since we ride close to many people’s backyards but these dogs sounded too close and were on alert! Rounding the corner at Morningside Nature Preserve I saw it: a pen full of goats with two angry dogs guarding them! 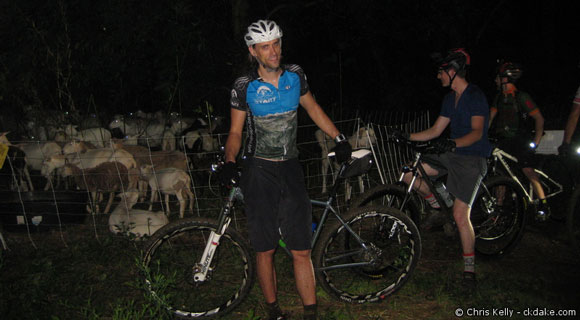 The goats were placed in the preserve to eat the kudzu and other noxious weeds and their fence was installed literally on the edge of the trail. As we continued on the trail, our legs brushed the wire fence while the dogs nipped at our heels, barking their displeasure. There must’ve been a couple dozen goats and the funny thing is they didn’t seem to be fazed by a bunch of bikers with bright lights. We returned a few weeks later to find the goats had moved on… thank goodness!

On a fall ride last year our group ran over a yellow jacket’s nest on the trail and it was one of the scariest moments yet. Being stung by bees sucks no matter what but imagine being stung by a swarm you can’t see! After quickly emerging from the singletrack I stripped off my jersey and swatted at invisible bees. Most of us ended up being stung a few times and I still feel my adrenaline pumping when I hit that section of trail at night.

The animal night shift includes all kinds of nocturnal creatures like cats, raccoons, and possums. I’m not usually scared of animal encounters but at night, it’s easy to get startled. Then again, I’m sure the animals are even more scared by our bright lights and blazing speeds on the trail. I wouldn’t be surprised if some raccoon died of a heart attack after seeing our group roll through!

Back in May our group came across what appeared to be some sort of pagan teenage ritual taking place in the woods with a raging bonfire and rocking music. It turned out to be a group of students from a nearby high school celebrating the end of classes and this party seemed to have it all from booze to buzzes. On seeing our bright lights, several kids decided to run down the very trail we were following. We tried to assure them we weren’t the cops but they were gone like deer through the trees!

Night riding is great because it allows you to see an old trail in a new light–so to speak. Share your weird trail encounters in the comments or here on the forums.

Wow, I must be doing it wrong, I haven’t seen any of those things … yet.

Wow, that is quite the collection of crazy stories! Only in Atlanta, haha!! This really makes me want to come down for one of your Tuesday group rides.

My most interesting night riding encounter: coming within 2 feet of a black bear: http://forums.singletracks.com/viewtopic.php?t=7054&p=40167

Most of the crazy stuff we see on our weekly rides are in town on the way out to the trail. Like two guys going at it in a tunnel on the bike path.

In the woods, pretty much just wildlife. Lots of rabbits, deer, and owls. Last year I rode behind an owl who was flying at eye level for a good 20 yards or so – very cool experience!

I haven’t been riding at night more than about 20 times so I haven’t had anything as exciting as Jeff has found, but last night the rabbits seemed suicidal. Twice in a matter of 8 miles a rabbit just sat in the trail until I was about a foot or two away. I came very close to being hit by a deer last winter too.

made me think of this too
http://www.youtube.com/watch?v=xsHMnjIk-o8

Lol I would love to engage in some night riding… Cept the nighttime high temperature here in Colorado right now is hovering around 10 degrees haha.

Very cool stories. My night riding so far has been exclusively a case of starting too late in the day. Nothing too strange, but roller coaster type drop ins sure look different in a head light.

The goats on the trail are cool, but I bet it was a few tense moments hearing the “too close” dogs before you realized they were just guarding the goats.

No thanks on the bees also!

I was out of town when this was posted so I didn’t get a chance to mention something from my ride this week.

Based on the advice of a couple MTB hashers we rode through a couple long tunnels that were pretty wet and wild. I don’t need to do it again but I’m glad I got a chance to try it! Apparently we’re not the only ones who do this kind of stuff–one of the guys I met in Laguna Beach, CA said they have a tunnel they ride too.