Editor’s Note: Singletracks neither encourages nor condones underage alcohol consumption, alcohol abuse, excessive drinking, or biking under the influence. If you’re underage according to local law, choose to abstain, or just can’t stand when people geek out over beer, we ask that you choose another article to read–perhaps one of these.

It’s hot out there.

I’ve been drinking a number of summer beers lately, like Deschutes’ Lil’ Squeezy Juicy Ale which is a gluten-reduced, 5% ABV beer that sounds like a fruit beer, but doesn’t actually contain any fruit as far as I can tell. It’s delicious. And I’ve got some SuperEIGHT Gose from Dogfish Head on the way. This one is packed full of fruit plus salt, so it’s basically a boozy Gatorade, and sounds perfect for hydrating after a sweaty ride.

Summer beers are all well and good, but today we celebrate National IPA Day. A number of brewers around the USA are getting into the holiday with special beer releases, including Deschutes in Oregon. Their Slightly Exaggerated IPA is being marketed in conjunction with Travel Oregon and uses new varieties of hops including Sabro, which was cultivated in the Pacific Northwest.

In honor of National IPA Day, I decided to share my top-rated IPAs according to Untappd. If you’re not familiar with the app, Untappd allows you to track and rate the beers you’ve sampled. (It’s basically the Singletracks “My Trails” list, but for beer.) So far, I’ve rated 187 different IPAs (over many years, to be clear); these are my top 10 favorites.

For several years in a row, Terrapin Brewery in Athens, GA aged one of their beers in rum barrels from Richland Reserve distillery. In 2015, the brewery aged a 2014 Hopzilla DIPA in barrels, and the result was incredibly rich and delicious. Check out those IBUs! Sadly, this one is long off the market, though it’s possible collectors may have a few drops still lying around. 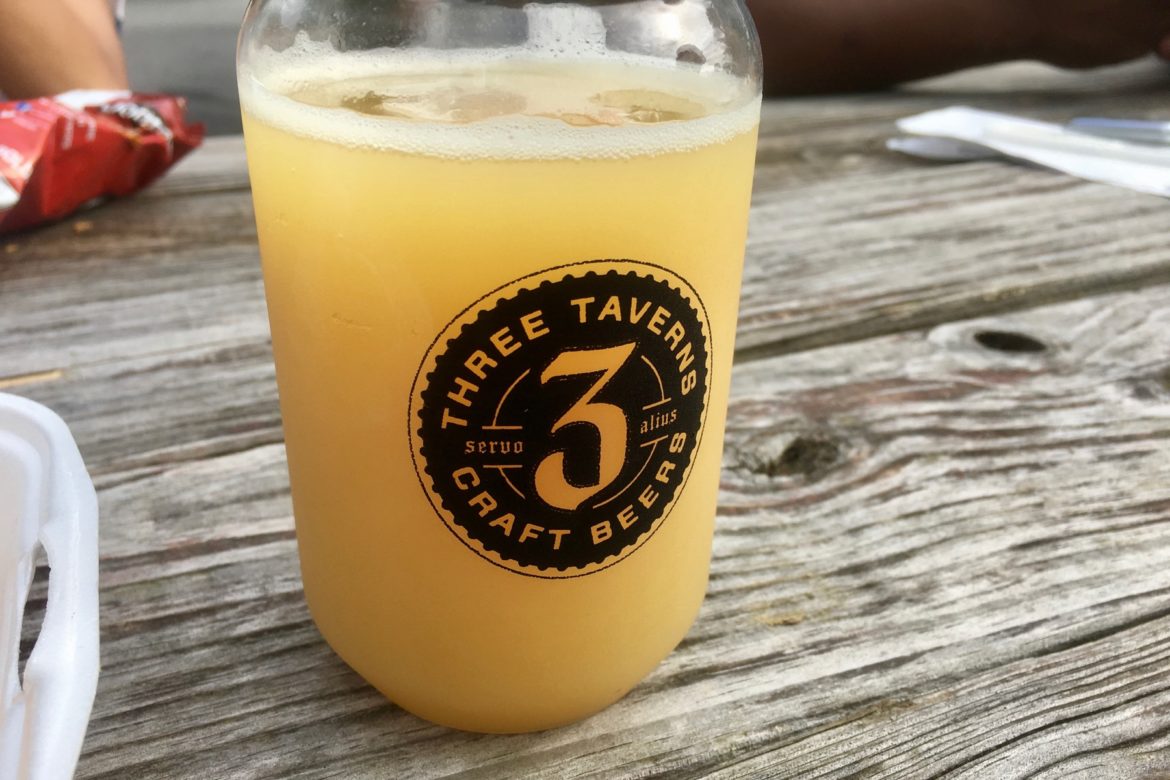 New England style IPAs have been trending over the past couple of years, and some IPA purists will avoid this style. I’m an open-minded drinker myself, and Crave is just plain delicious and easy drinking. When poured, Crave is so cloudy it looks like a glass of orange juice! Three Taverns is my local brewery, so close I can walk to it, so there’s a chance I’m biased in my rating. Going directly to the brewery does ensure the freshest beer, which can be important, especially with certain IPA styles. Crave is available in cans too, though may be tough to find outside of metro Atlanta.

Scofflaw is another Atlanta-area brewery, though I actually bought this one in cans from the gas station on the corner. Double Jeopardy is an unfiltered IPA that’s sweet and rich with Simcoe hops providing bitterness. Looking at my list, it seems I have a preference for boozy IPAs like this one.

Hopitoulas is a West Coast style American IPA that features six hop varieties. It’s crisp and well balanced. I sampled Hopitoulas while in New Orleans in 2016 for my brother’s wedding, so I’ll always associate this beer with family and good times.

We’re five beers in and finally, a beer from a brewery outside the southeast! Or is it? Technically, Oscar Blues is from Colorado, though I’ve visited their brewery in Brevard, NC many times while biking in Pisgah National Forest. Each year Oskar Blues reinvents GUBNA with a new hop profile, so technically the one I’m putting on my list is the 2016 version. No matter, GUBNA is pretty much guaranteed to be delicious every time.

Here’s the thing about beer (and food or anything else, for that matter): everyone’s tastes are different. There is no right or wrong answer when it comes to your favorite beer. Ballast Point seems to have endless varieties of their Sculpin IPA, and some people aren’t going to be a fan of grapefruit, or pineapple, or whatever in their beer. Me, I found this one delicious with just the right balance of bitterness and fruitiness for a clean finish. 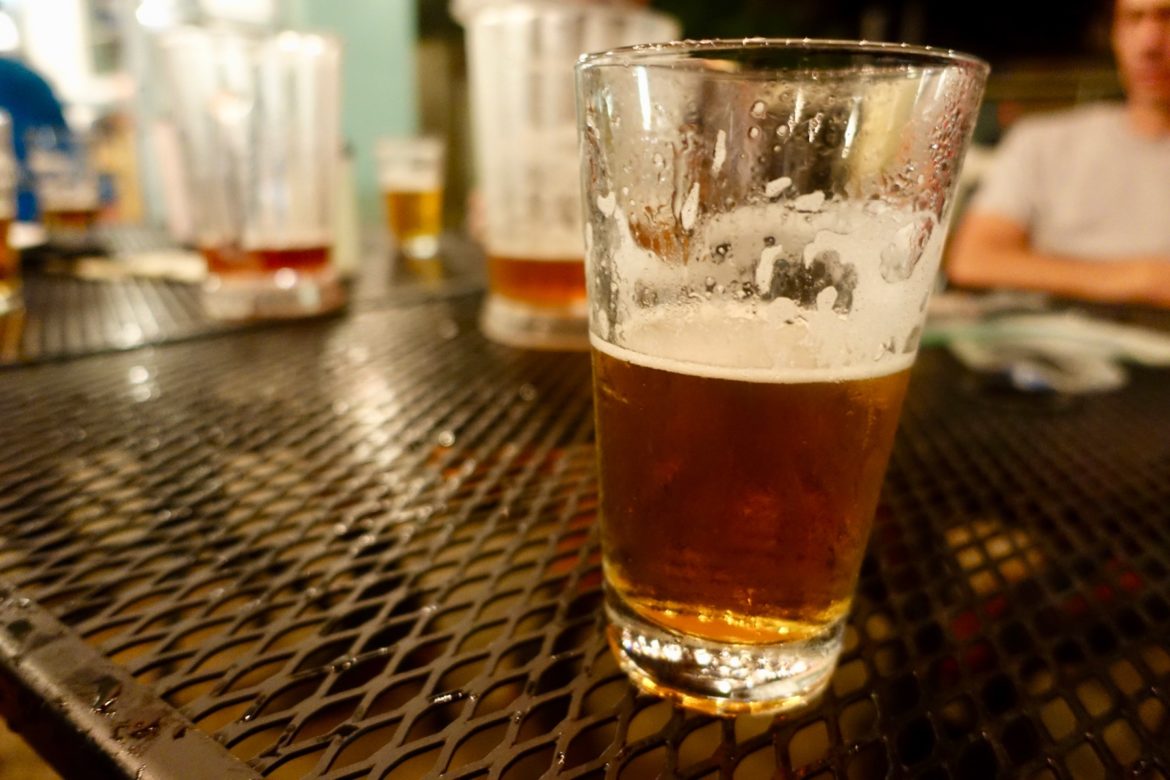 This beer hasn’t been in production for a while, and if you find a bottle, don’t bother drinking it because you’re well past the “enjoy by date.” Interestingly, it looks like I checked this beer in on July 23, 2016 so I had it at the tail end of its freshness with just two days to spare. Still, it was incredibly tasty, bursting with fruit and a hop-forward flavor. RIP Enjoy By 07.25.16.

Three Taverns A Night on Octane

My local brewery strikes again! For some reason I have a thing for coffee beers, and most of them tend to be stouts. Three Taverns teamed up with local coffee company Octane for this cold brew coffee infused American IPA which was surprisingly smooth with a bit of an acid finish. It’s been a couple of years since I’ve had a Night on Octane; hopefully the brewery brings this beer back in the future.

Windows Up was a total surprise. As I recall, a friend gave me a six pack of Windows Up as a thanks for borrowing my mountain bike. It has a cool name and label, but more importantly, it’s one of the cleanest, most flavorful American IPAs I’ve tasted. If I had regular access to Alpine Windows Up (and it didn’t cost more than $12 a six pack like it does here!), I’d keep this stocked in my refrigerator at all times.

I honestly don’t remember a lot about this beer, which must mean it was pretty good, amirite? Best I can tell from my Untappd checkin, I had Ponzi while visiting Washington DC a couple summers ago. Five out of ten of my favorites listed here are American IPAs (four are DIPAs, and one is a New England style) and this one appears to have a similar ABV and IBU profile to Alpine Windows Up (which I do remember.) So there you go. It’s delicious.

Now it’s your turn: What is your favorite IPA, or if that’s too tough to narrow down, what are your tip five?

It seems to be just me, but I find IPAs unpleasant to drink. I’m a Belgian beer fan, but seem to be in a minority, especially among mountain bikers. That being said, give me a nice quality bourbon over all else.

Agreed, Belgian beer is delicious. Not sure why it isn’t more popular with mountain bikers… The high ABV of some makes hydration a challenge.

FWIW, I also find most IPAs too bitter. Like you, I much prefer a fuller, more flavorful Belgian Ale. But before indulging in any beer post-ride be sure to re-hydrate properly.

I’m sure you guys have tried ’em, but Double IPAs and New England IPAs don’t taste as bitter to me. American IPAs, on the other hand, tend to be quite bitter.

That’s a solid list. “Ghost in the Machine” by Parish Brewing (Parish, LA) is worthy of being on the list. I’m sure how far they distribute but if you can find it then buy it. You won’t regret it.

I’ll have to check that one out!

Flavored Sculpins are the normal Sculpin with flavoring added after brewing. This takes a lot of the allure away in my opinion. To me, it’s a gimmick.

From another source “The brewery won’t say exactly how the grapefruit flavor is added — it’s “a proprietary process that uses grapefruits purchased from Florida” — but does say it is added as a final step in making the beer.”

For whatever reason I didn’t rate the regular Sculpin nearly as highly. I should try tasting them back to back and see if that makes a difference.

Burning Can is being held next weekend at the REEB ranch! You should go. Add a few more new IPA’s to your Untapped Ap!

IPAs? – Disgusting.
Just from looking the photos I could vomit…
I’m from Germany. Like our belgian or czech friends, we grow up with beer.
I could insist on the over 500 years old “German purity law” that allows only hop, malt, yeast und water as ingredient to beer, but I don’t bother to do so.
IPAs are flavoured beers. Beers that have no own character, so the brewer adds something to help people, finding it drinkable. If we like to drink a sort of that, we take beer and mix it with lemonade and call it “Radler” (=cyclist ! :-). It’s sweet, not bitter.
I’d prefer a Coke to a IPA – but that’s a different story… 😉