Stelios Psaroudakis of Calgary publicly claimed that he had hit a barbed wire booby trap with his neck while mountain biking on a popular trail in West Bragg Creek, and subsequently had his bike stolen. However, local Alberta mountain bikers expressed disbelief at Psaroudakis’s story on social media, and in their statements to law enforcement agencies. Catch up on the back story here:

Psaroudakis has subsequently been charged with fraud and public mischief, and has turned himself in. Catch up on the statement from RCMP here.

“Our investigation has concluded that Mr. Psaroudakis was riding an all-terrain vehicle and was involved in an incident at another location at another time, and was not riding a bicycle,” Insp. Lauren Weare said.

According to GlobalNews.ca, “Weare added that Psaroukadis did hit barbed wire while riding [an ATV], but it was part of a fence meant to contain livestock.”

According to Psaroudakis’s quote on GlobalNews.ca, the entire incident started with a “white lie”:

Psaroudakis said he was riding with a friend in West Bragg Creek, however he was riding his friend’s three-wheeler trike, not a bicycle. The trike wouldn’t start, and when he tried to push-start it, he lost control going down a hill and hit the barbed wire.

He said when doctors at the hospital asked what happened, he said he’d been riding a bike. When they clarified, asking, ‘You were on a bike?’ he said, ‘Yes,’ to prevent his friend from getting in trouble, as he didn’t have insurance or registration for the trike.

This incident has led to online commenters on Facebook and other social networks referring to Psaroukadis as the “Barbed Liar.”

“It’s just one white lie turned into another and now I’m the one getting charged and I’m the one that got hurt,” said Psaroukadis.

“I try to do something good and now everybody’s calling me a liar, calling me a fraudster. I’m none of those things, I just wanted to help.”

Despite claiming that he was trying to protect his friend by lying, Psaroukadis has published a public post on his Facebook page naming his mystery friend, essentially throwing him under the bus. Here is the post in its entirety:

Sorry to everyone don’t believe what you hear on the news it’s all propaganda and bullshit and here is the story I went to Mark house to go have steaks and have a good night when he brings out his three wheeler and said let’s go for a ride around his property we went once together had fun then he let me try it out and it stalled I told him to push start it and I’ll put in third gear and pop the clutch he pushed me towards the downhill when the thing started up and took off on me going downhill going really fast I tried to downshift into first gear to slow it down because the brakes on the handles were broken he told me the foot brake worked yeah right maybe 10% I try to turn it away from the fence when it almost flipped over so I prepared myself for the impact and the Barb wire got me around the neck knowing what a rough life he had in the past being a shady little fucker now that he has his helicopter job real name Marc townson not the fake name samuel cummins he uses on facebook I didn’t want him getting in trouble and losing his job so I lied about what happened so he wouldn’t get charged with negligence and causing bodily harm on top of that the three-wheeler was not platted , registered or insured so I didn’t want the hospital fees getting Forward to him .
the reason I started to GoFundMe I wanted to donate 100% of the proceeds to calgary mountain bike alliance to buy deer cams and make Alberta Trail safer because this is the real problem people putting traps up for bikers to get hurt and I thought with my Miss half I can make something good come out of it and help people everyone that knows me and my close friends know that I’m always there to help and I always think of others before I think about myself 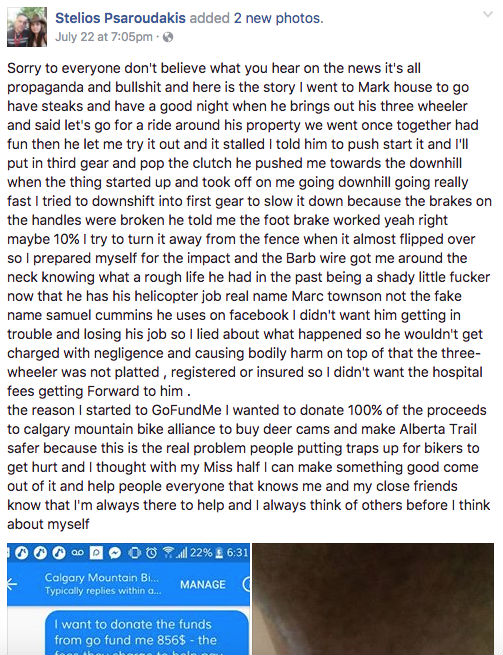 GoFundMe ran their own investigation of the crowdfunding campaign after Psaroukadis shut it down, and they have subsequently returned the money to the people who had already donated. Psaroukadis has also been banned from future fundraising on the website, according to CTVNews.ca.

“My close friends know that I’m always there to help and I always think of others before I think about myself,” Psaroukadis’s statement concludes.

This guy just keeps on digging his hole deeper and deeper. He still cannot take any personal responsibility. How do people like this even have friends?

The GoFundMe money should have been donated to the mental health association. This dude is either seriously mentally ill or tragically simple. Story manages to walk the line between funny and just sad.

The best definition of a D bag.