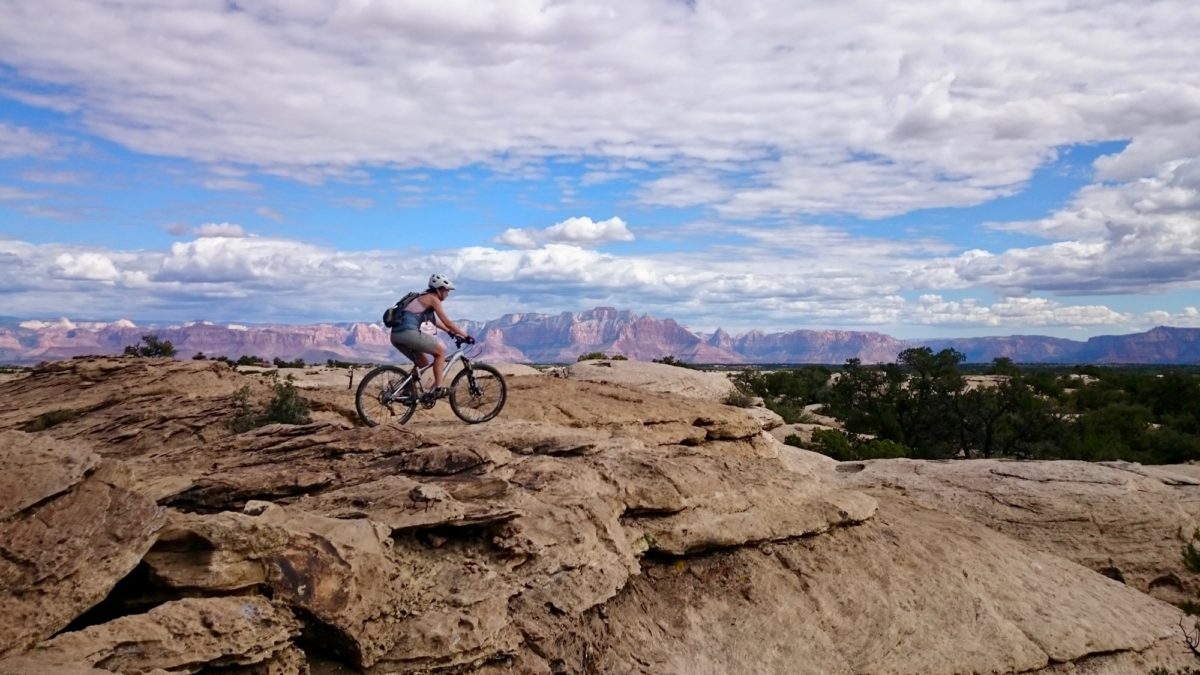 Several hundred feet below us, red dust obscured our view of the helicopter.  The whop-whop-whop of rotors whirling drowned out the sound of our conversation, and we all fell into a companionable silence.  We didn’t mind the halted discussion about our ride plans—our mouths were consumed with burritos and beer.

Our visit to Southern Utah’s Gooseberry Mesa occurred the weekend before the 2015 Red Bull Rampage. From the front deck of our yurt, we had a front-row view of Red Bull Mountain and all of the hoopla that goes into preparing for mountain biking’s premier adrenaline-fueled event.  Helicopters made drops and ant-sized humans hammered wooden features.   The only thing more entertaining than watching the set up would have been seeing the event itself.  This also happened to be a last-chance experience.  In 2016, the venue for Rampage moved across the valley, and the event went “back to basics” without the wooden features and man-made obstacles.

I took another slug of my beer with my left hand and held my three-year-old son back with my right.  A dozen forward steps from our porch, a dramatic thousand-foot drop meant certain death for an escaping toddler.  With the sun making a dramatic exit, the cliffs of Zion turned a beautiful splattering of orange, pink, and blue, and then went dark.  The helicopter noise abruptly stopped, the sounds of desert night emerged, and we crawled into the safety of the yurt. 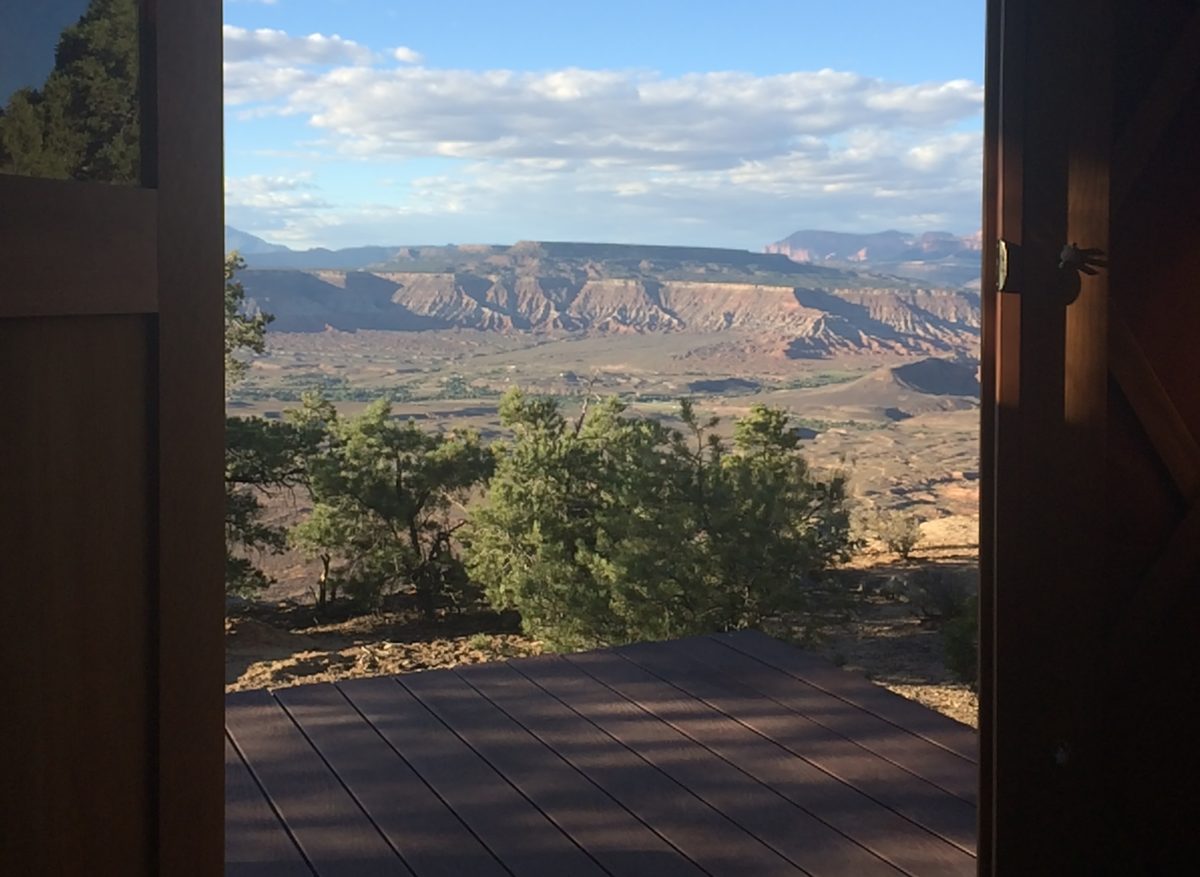 Gooseberry Mesa’s two rustic yurts provide a cozy home-away-from-home for mountain bikers in the most unlikely of places.  A long (but recently improved upon) dirt road leads to a sudden dead-end.  A first-time visitor will stop the car, confused–“where did we take a wrong turn?!”–and then they will notice, hidden behind some scrubby pinion, the two unassuming yurts clinging to the edge of an abyss.

It’s not the yurts themselves that attract visitors.  Wanderlusting mountain bikers come here for the red-rock riding and awe-inducing views.  Gooseberry Mesa is isolated from other area trails as a result of vertical cliffs and a long, dirt road.  As such, it makes sense for visitors to stay for more than a few hours.  It’s not the kind of place I would want to stay for a week—the mesa hosts only 18 miles of trail—but for a weekend, Gooseberry Mesa provides an idyllic getaway.

As we slept soundly in our bunk beds, my mom and sister arrived.  Amazingly, they offered to babysit so that my husband, Blair, and I could ride together.  After a lazy morning of drinking coffee on the deck and watching the sun reemerge, we prepped our gear for a mountain bike ride. 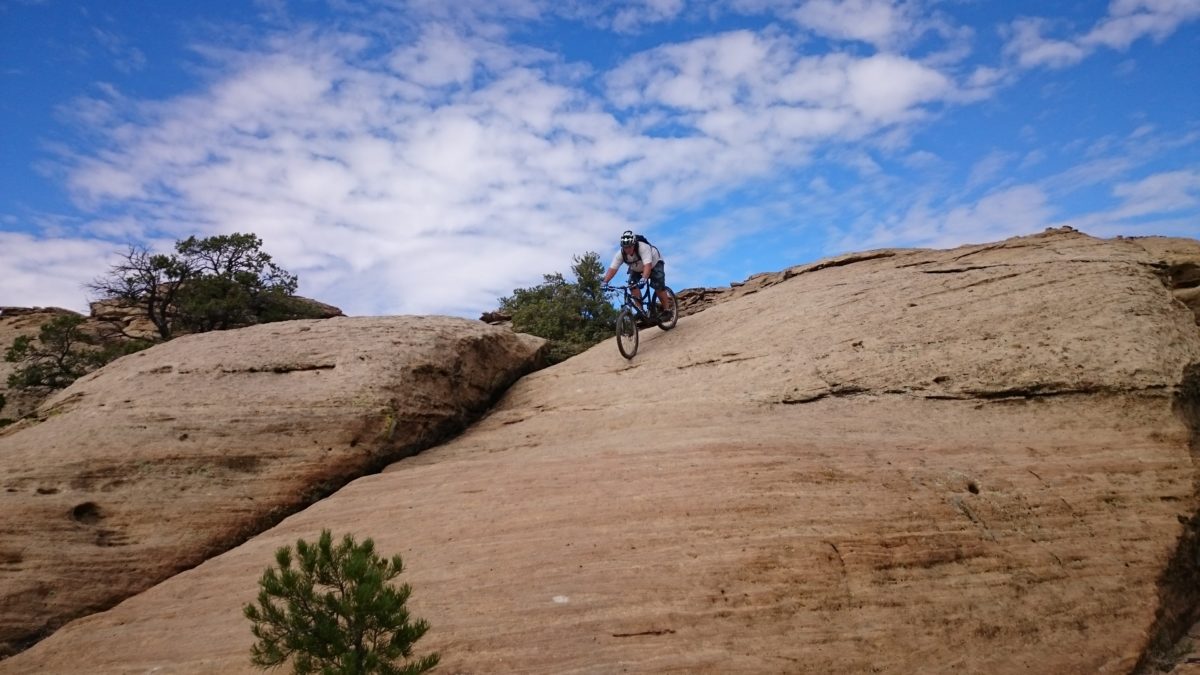 The warm, breezy autumn weather and blue skies provided ideal riding conditions as we pedaled away from the yurt.  In fact, Gooseberry has perfect weather for mountain biking most of the year.  Even in summer, when riding is unbearable at lower elevations, up on the mesa the temperature is cool and pleasant.  In winter, snow covers the trail for a few days at a time before melting again.

Starting our ride on the north rim of the mesa, Blair and I weaved in and out of juniper and up and over slickrock features.  While the terrain was similar to Moab’s Porcupine Rim or Sedona’s Hangover, the trail followed the rim but didn’t hug it, so we were able to enjoy the views without fear of a deadly plummet.

This was a good thing, as I was also busy looking around for dinosaur tracks and petrified wood.  The colorful red and white rock, formed between the Triassic and Jurassic periods, provides signs of the past.  We also searched for clues from more modern visitors–white dots that marked the trail.

At the far western edge of the mesa, there is an optional spur trail that heads to an overlook.  Due to a parenthood-induced fear of heights, I resorted to crawling on my hands and knees to the edge.  This led Blair, and several other mountain bikers, to poke fun at me, but didn’t cause me to stand up.

Despite riding on a Saturday, the trails were surprisingly uncrowded.  At the overlook, however, a small group had formed.  We chatted with a couple from Denver, a father/son team from Oregon, and several other out-of-state visitors. This geographic diversity made it clear that Gooseberry Mesa has become a bucket-list destination.

Leaving the overlook, things got a little rowdier.  We were temporarily hesitant thanks to the bright pink “extreme” designation on the South Rim Trail.  Despite the warning, there wasn’t anything that we couldn’t avoid or walk, if needed.

In several spots, we stopped to re-ride features and goof around.  The Gooseberry Mesa trails invite this sort of playfulness.  It’s the kind of place you come to play, not to hammer.  That said, we were still exhausted by the end of our ride.  Despite a near total lack of climbing, the technical nature of the riding and the exposure to copious amounts of sunshine were surprisingly grueling.

When we finally made it back to the yurt, 13 miles and a whopping 4 hours later, we were ready for beers and hot dogs.  We roasted our weenies in an above-ground fire pit precariously close to the rim.   Once again, I trapped my son in an iron grip while we chatted with our yurt neighbors—a trio of mountain bikers from Southern California.  Like any good neighbors, we shared a couple brews, and our two groups told mountain bike stories until bedtime—which felt late but which was probably 8pm.

It’s this camaraderie among mountain bikers that has kept Kenny Jones, one of the owners of Gooseberry Yurts, from advertising on AirBNB or other vacation rental sites.  “About 90% of our guests are mountain bikers,” explains Jones.  “My partners and I are all mountain bikers and it has always been our goal to create a really cool accommodation for like-minded persons.”

During our visit, Jones was camped out with his van just down the dirt road.  He was friendly, and his enthusiasm for “the Goose” and sharing the magic of the place with others was evident.  He has recently installed a BLM-style pit toilet, and will eventually add an additional two yurts to the existing ones.

No doubt the new yurts will have plenty of demand from the mountain bike community—hardcore hammerheads and casual Saturday riders alike.  While most of the trails on Gooseberry Mesa are quite advanced and technical, anybody with a bike can have fun here.  On Sunday, I rode with my 60-year-old mom (who, let the record note, is no slouch but doesn’t love the techy stuff).  She loved the “Practice Loop,” easily conquering features she wouldn’t normally ride.  While we were out sessioning the slickrock, my husband took our toddler for a ride.  It turns out even the balance bike crew digs sandstone.

As we were finishing up our Sunday ride, the sky began to turn dark.  A few fat raindrops stained the yellow and red rock, and we scrambled to load the bikes on the car.  The sky lit up with a flash of lightening, illuminating the walls of Zion.  And just like that, we were barreling down the dirt road, outrunning a storm that would inevitably turn the road to impassible goop.  It was an abrupt departure, but not a goodbye.  Gooseberry Mesa is too good not to come back.

Plan a Visit to Gooseberry Mesa

The yurts rent for $100/night on weekdays and $120/night on weekends.  There are bunk beds that sleep 6 adults, lanterns, a cook stove, outdoor solar shower, and a wood stove for heat.  Reservations can be made on the Gooseberry Yurts website—just plan ahead, as weekend dates fill up quickly.

The BLM provides a great downloadable brochure with a trail map and driving directions to the mesa.  As previously mentioned, Washington county has recently made improvements to the dirt road so you won’t have to fear the mud like we did.

The Mesa has more than 19 miles of trails, I’d guess about triple that.

This is my “go to” spot area from SoCal and get out there 2-3 times a year. I’m actually heading back tomorrow night.

A few addendums. The 2016 Redbull Rampage was directly below the yurts. Not across the valley.

There are definitely more than 18 miles of trail. Make sure you ride the Gander trail which crosses right in front of the Yurts.

The Smithsonian Butte scenic byway which in the past was prone to being very muddy, has now been significantly revamped and should hold up to inclement weather better. Even the mud pit prior to the cattle guard on the White Road has now been filled in and graveled.