As we travel the west and embrace the nomadic lifestyle, Metallica’s “Wherever I May Roam” is the theme song for this summer:

While Salida has historically been known simply as the launch point for the Monarch Crest shuttle run, recent trail developments by the Salida Mountain Trails organization are transforming the Salida region from a one hit wonder into a true mountain bike destination.

For instance, you can literally ride to the Arkansas Hills Trail System from downtown. Just head across the F Street Bridge, hang a right to follow the tracks until the obvious crossing to pick up the Frontside singletrack. 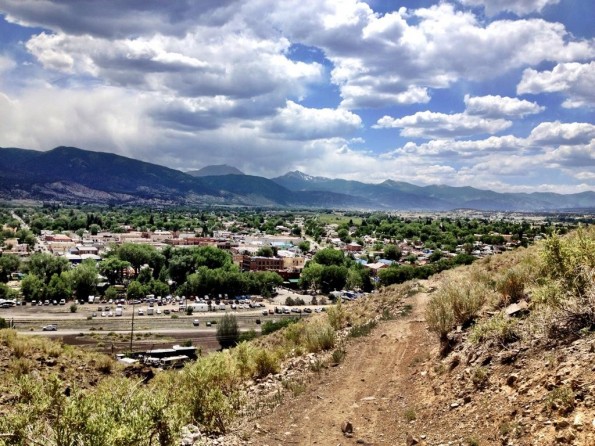 View of Salida while climbing up the Frontside Trail.

Unlike some easily-accessible trail systems, Arkansas Hills isn’t like riding a golf course in the mountains. While some of the lower trails are easy, if you climb up to the higher trails be prepared for a real technical treat! The 3.2-mile (one way, best ridden as a 6.4 mile out-and-back) North Backbone Trail is a rolling technical playground with serious exposure.

If you’re ready to descend back into town, there are a number of different options including the rowdy Unkle Nazty trail. If you decide to take on the naztiness, be sure to bring some suspension… and as much of it as possible! There were rocky sections that I rode up to, and couldn’t see a line until I walked down them and studied them for a few minutes. 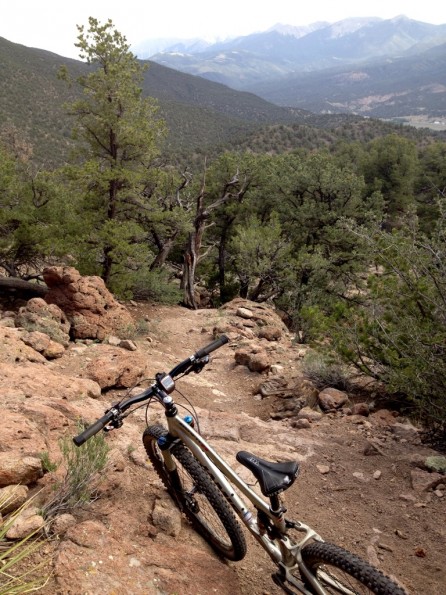 Taking a break from riding the Jamis Dakar 650b down a nazty switchback on Unkle Nazty.

Thanks to the low elevation, the local weather patterns, and the fact that this entire mountainside faces south, Arkansas Hills stays rideable 12 months a year (with maybe just a couple days off to dry out).

Add in even more trail developments at Methodist Mountain, the Rainbow Trail, and Bear Creek, and I’d recommend putting Salida on your list for a mountain bike trip sometime soon!

“Anywhere I roam
Where I lay my head is home

(And the earth becomes my throne)”

From Salida we headed toward Fruita, planning to camp out in the desert that night. I was supposed to pick up a bunch of stickers from Jeff when we met up in Boulder, but somehow both of us managed to forget before we parted ways. However, we would eventually be traveling the same stretch of highway between Grand Junction and Montrose.

Since I’m really wanting to spread some Singletracks sticker love as I travel through Cali, Jeff set up a little geocache drop of stickers for me to find: 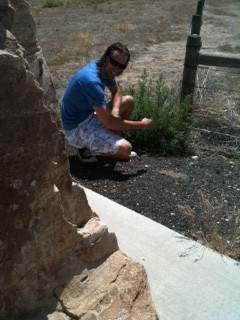 Despite not being able to get the GPS coordinates to work, between his description of the place and the photo he emailed over I was successfully able to locate them: 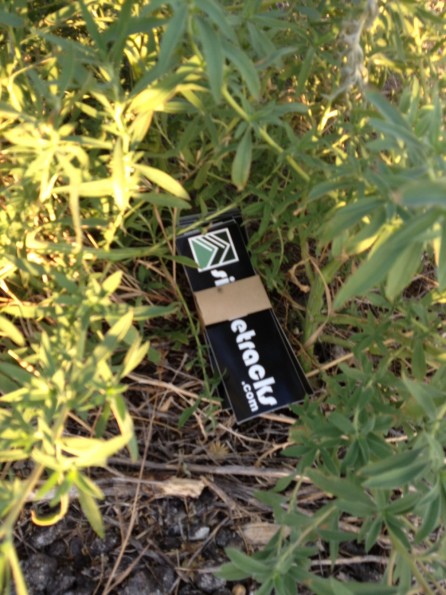 So if you want a sticker, be sure to come out to the California group ride or track me down at a random trail during my journey! Also, for those who attend the group ride at Soquel Demonstration Forest in Santa Cruz on Saturday I’ll also be handing out free Singletracks membership codes. Sweet!

While filling up at a gas station in Montrose, I looked at the bike rack and realized that something was seriously wrong. The bikes had been bouncing around a lot more than normal, and as I looked at them I realized they were hanging way too low. After some investigation, I discovered that the weight of the bikes on the rack had bent my slightly rusty bumper and it was hanging down at a dangerous angle! With thousands of dollars of bikes on the back, the last thing I wanted was to have the entire assembly come flying off the car, so I got creative and decided to stabilize and reinforce it a bit: 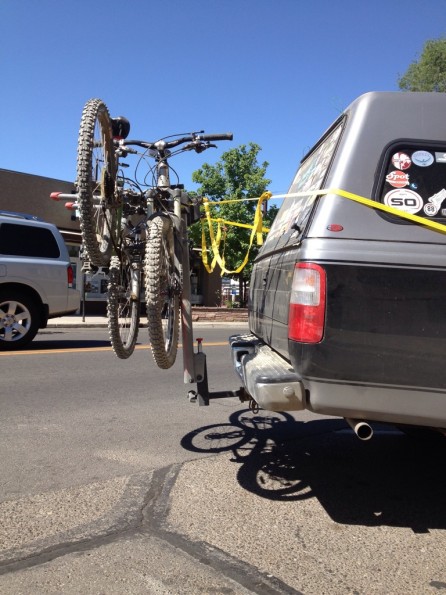 “Roamer, wanderer
Nomad, vagabond
Call me what you will”

While in Fruita I just had to ride the 18 Road Trail System since it is on our list of the top 10 trails in the world. I asked mtbikerchick for some trail recommendations, and I wasn’t disapointed! I climbed Prime Cut several times over the course of the day, and descended Kessel Run, PBR, and Zippety Do Dah. This was my first time ever riding legitimate desert trails, and despite getting an early 6 am start I was pouring sweat before the end of my ride. 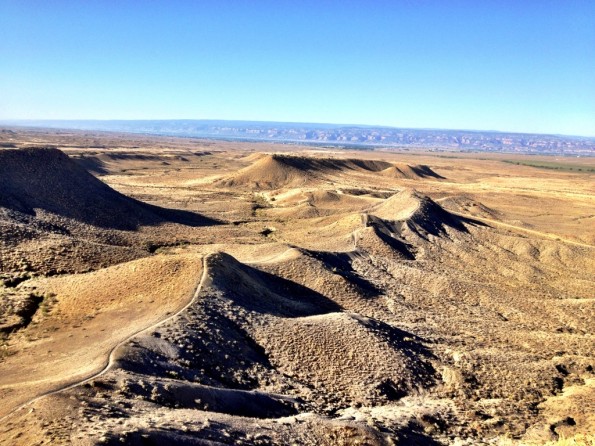 After riding here, I can see why Fruita’s slogan is “Keep singletrack single.” Out here in the desert, it is so easy to pick an alternate line and shortcut a turn or a hard spot. Since there is so little precipitation, your tire marks remain, and others think, “hey, there are tracks there, it must be ok to ride.” Before you know it, a new trail is formed. At points in the trail system, there were so many tracks going every which way that I had some difficulty figuring out which trail was the original track. Thankfully, those spots were relatively few and far between. 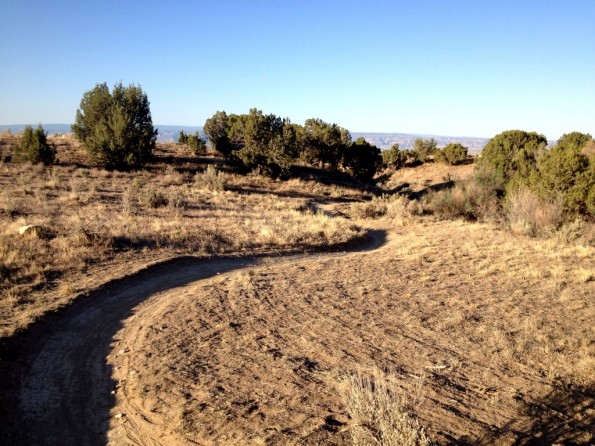 Early morning ride on Kessel Run. The Jamis Dakar 650b made easy work of this bermy descent, but I was really wishing I had a bike with the name “Millenium Falcon.”

Despite riding for close to three hours, I don’t think I pedaled even half the trails at 18 Road–not to mention the other famous Fruita trails like Horsethief Bench.I can’t wait until I can plan a week-long Fruita vacation! 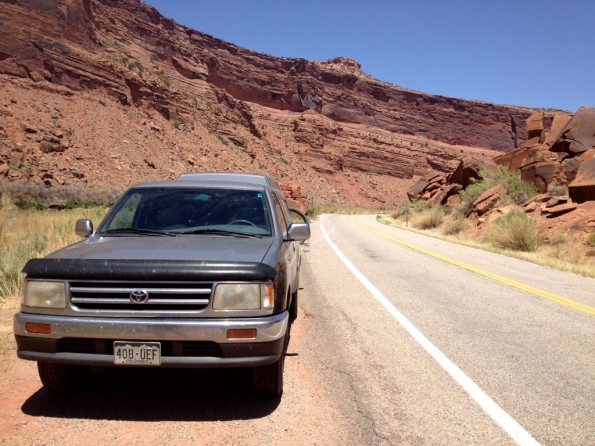 The trusty Toyota T-100 in transit.

While texting back and forth with Maddslacker about Moab, he recommended taking the scenic route down from I-70 by driving along Hwy 128. 128 basically runs through the middle of nowhere, but follows the beautiful Green River and the edge of Arches National Park. It’s not a highway that you’re going to be able to fly down, as the tight turns and the incredible views will encourage you to slow down and soak in the experience. 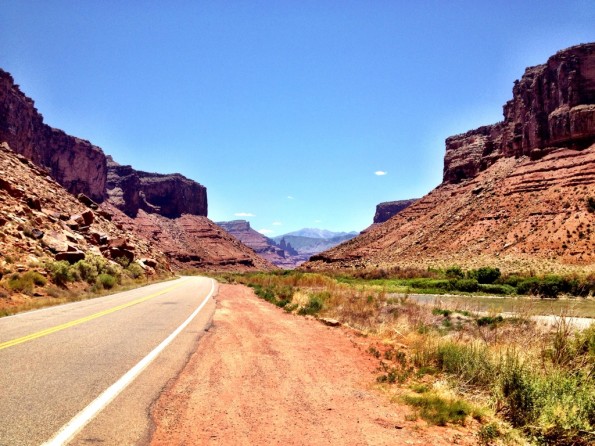 After two days of traveling and riding, we finally made it from Bailey, Colorado to mountain bike mecca: Moab! Stay tuned for some Moab ride reports… coming soon!

“Carved upon my stone
My body lies, but still I roam,
Yeah yeah!”

I love the sticker drop 😀

That’s too bad about your bumper. Good thing we weren’t able to get a mini-camper for you to tow on the trip – that thing would’ve been skidding down the highway at some point. 🙂

Whilst in Moab, stop in at Uranium Cycles and chat with Marshall for trail 411 and a shuttle for the Whole Enchilada or at least UPS and LPS, and definitely eat at Moab Brewery and try the beer sampler!

Great write up. Very enjoyable to read. Its a dream of mine to make it out there and just ride trails upon trails. Hope to do that at least once in my lifetime. BTW I like the Metallica references you threw in there >=) well done

While in Moab area, if you havn’t been to Phils World trails in Cortez, Colorado it would be worth a day to check them out. The Ribcage Trail and Maxxit Trails there are AWESOME. Probably about a 3 hour drive there from Moab but well worth it. Great singletrack. Good morning riding this time of year too.

There are many new trails in Moab. I hope you ride these and add them to the singletracks database. Check out North 40, Long Branch, Killer-B and the beginner Rusty Spur in the BRANDS section; Klondikes has Dino Flow and two beginner trails Agate and Jasper; and up in the Gemini Bridges tracks is the MAGNIFICENT 7 Tails: Bull Run, Arth’s Corner, Little Canyon, Gold Bar, Gold Spike (4WD Rd) & Poison Spider (4WD Rd and already listed) , Portal and Great Escape. And more trails a’comin’.
Poison Spider Bike Shop can hook you up with our local trail volunteers, if you want to add your sweat to trail making too.

There are many new trails in Moab. I hope you ride these and add them to the singletracks database. Check out North 40, Long Branch, Killer-B and the beginner Rusty Spur in the BRANDS section; Klondikes has Dino Flow, UFO and two beginner trails Agate and Jasper; and up in the Gemini Bridges tracks is the MAGNIFICENT 7 Tails: Bull Run, Arth’s Corner, Little Canyon, Gold Bar, Gold Spike (4WD Rd) & Poison Spider (4WD Rd and already listed) , Portal and Great Escape. And more trails a’comin’.
Poison Spider Bike Shop can hook you up with our local trail volunteers, if you want to add your sweat to trail making too.

@RideMoabUTah You are welcome to add the trails to Singletracks.com. I really like descriptions written by locals who know the area best.

@RideMoabUTah, we’d really appreciate it if you’d add them to the database, as I’m already through Moab and didn’t get a chance to ride them! Anyone can add trails to the Singletracks.com database, and locals usually know best… we’d love to have your expertise and have you contribute to this public resource! Just hit up this link and start adding trails: http://www.singletracks.com/php/addtrail.php

@trek7k, yeah I thought about that, we’d have really been in a world of hurt! So far it’s still holding up, although I’ve been using the ratchet straps religiously.

@maddslacker, sorry already left moab, but i definitely ate and drank at the Moab Brewery!

I read this, this morning…have had that damn song in my head all day..

And the road becomes my bride….

Ok ok I guess I need to suck it up and go ride Zippity at 18 Road! That and the Edge are the only two trails out there I haven’t ridden. Sounds like you had a blast! I hope you hit up Sovereign while you’re in Moab – it’s classic! Love the Brand Trails too.

@mtbikerchick, Zippety was great! And after looking at the map, I really wish I had gotten to ride The Edge. Next time, I guess.

Sorry, already have been through Moab, and there were A LOT of trails I didn’t get to ride. I can’t wait to get back there!

Great write-up mtbgreg1, sounds like your having a blast. Highway 128 is such a great road to take, the scenery is so incredible.

Good thing you went when you did … i70 is closed now due to a wildfire.

Wow really? Crazy! We didn’t actually drive 70 much, though. From bailey we dropped down through salida and then over through gunison and Montrose. Beautiful drive!

LaSalles if you get hot. Bartlett Wash is a sweet way to strat riding the rocks but here are biting flies there some times.
Hot in Moab. I’d suggest heading to Thunder Mountain, Brianhead and the VRRT. Mytoge Mtn is on my must ride list. Skyine Drive is awesome.