Before the snow started falling I had to squeeze in one last trip in the high mountains, so my wife and I headed up to Steamboat Springs for a quick weekend trip. After driving up on a Friday morning, I picked out an easily-accessible ride for a quick afternoon spin, but one that I hadn’t ridden yet. I settled on the Mad Creek / Red Dirt loop, with a couple of fun additions tacked on.

The Mad Creek trail begins with a doubletrack climb that, while a bit steep, is totally rideable even with a large 1x chainring. This portion of trail is popular with hikers as far as the barn, but beyond that traffic dies down considerably.

After climbing the doubletrack for a couple of miles you will eventually reach an old horse barn. This marks the turn off onto the Saddle Trail, which will take you over to the Red Dirt descent back to the highway. Once you’re in this area, you basically just need to find a trail that will bear left, up and over the low ridge. Trail signs are almost nonexistent in this area, so downloading a topo map for offline use via the Singletracks Topo app would be a pretty smart idea.

I wanted to tack on some more mileage, so I continued straight past the barn, making for the Swamp Park trail. While I didn’t see any trail signs, based on my research I knew that the Swamp Park trail roughly paralleled the creek and remained on the left side the entire time before hitting the Mount Zirkel Wilderness boundary, where I planned to turn around. I pedaled until I found the creek, picked a promising-looking singletrack trail, and started pedaling up the valley. 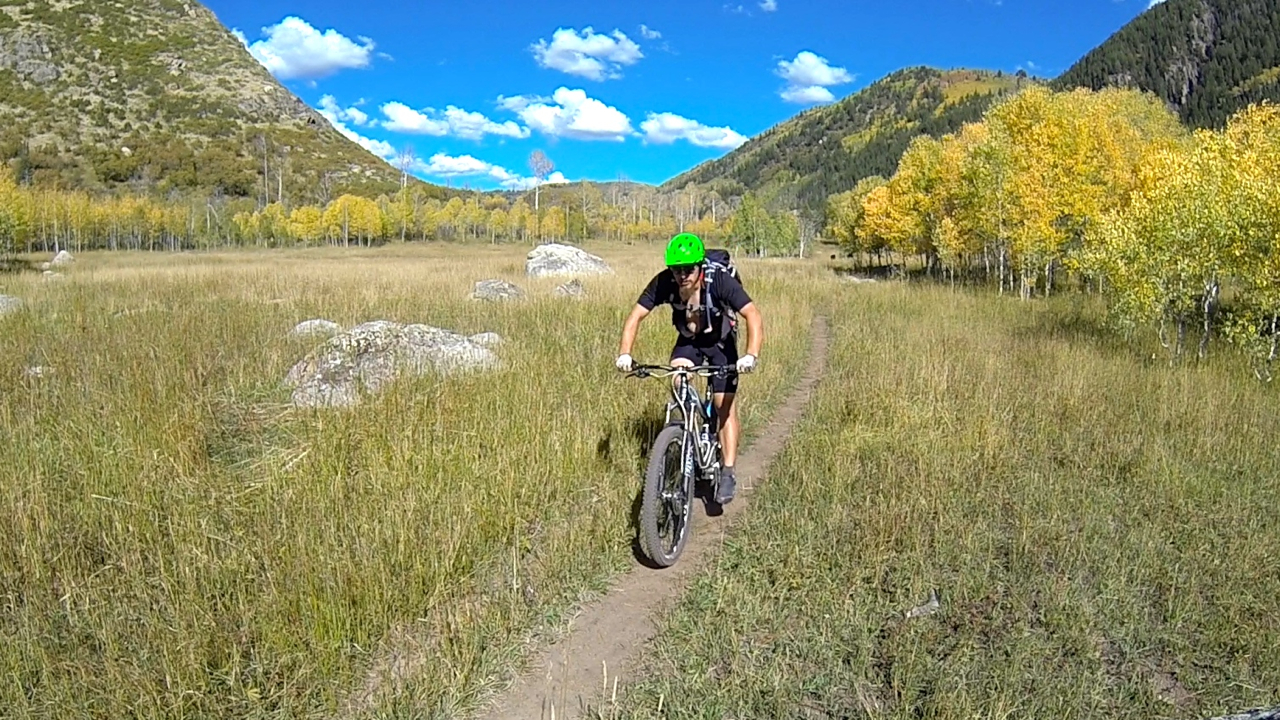 The unsigned Swamp Park trail is located in a gorgeous mountain valley that climbs up through stands of beautiful aspens, which were changing to golden yellow. The weather was perfect–even a bit hot–and my head was on a swivel as I took in the splendor of the mountains around me! 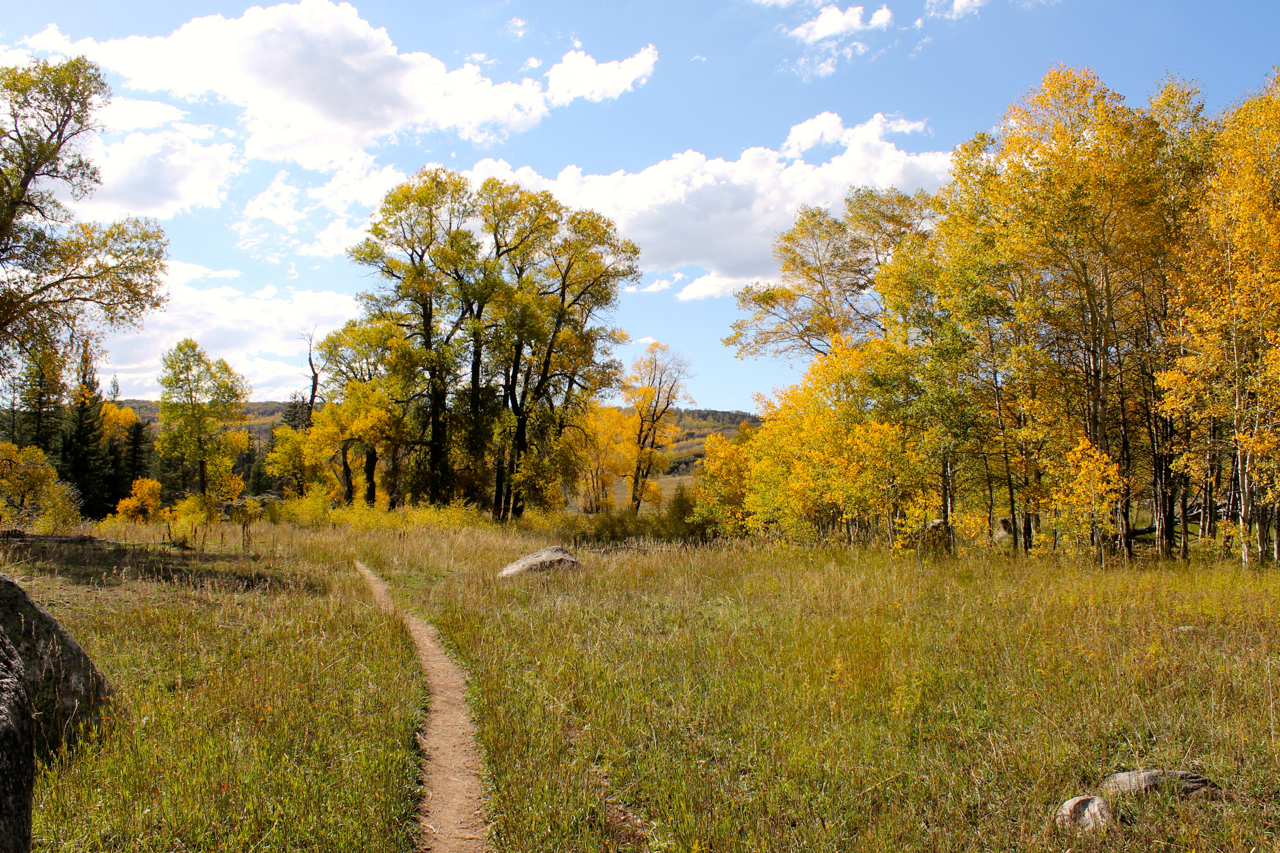 Suddenly as a I rounded a corner, I was faced with a herd of beef cattle grazing on the trail! Apparently this singletrack is located in open range, which started to make sense as I noted the cow pies everywhere and the animal tracks. I stopped a few feet away from the cows, and after a good bit of hollering they eventually moved off the track to eat their grass elsewhere.

The old barn, open range, and lack of trail signs convinced me that most of the trails in this little valley were originally animal-made. Whether they were formed by cows getting from A to B, or cowboys on horses getting to the cows, these serpentine swoops of narrow dirt where definitely built the old fashioned way. And sometimes, as was the case with this trail, that’s the best way to build a singletrack! This flowy, narrow track swooped through the fields and ducked into aspen groves, and was an absolute riot to pedal. 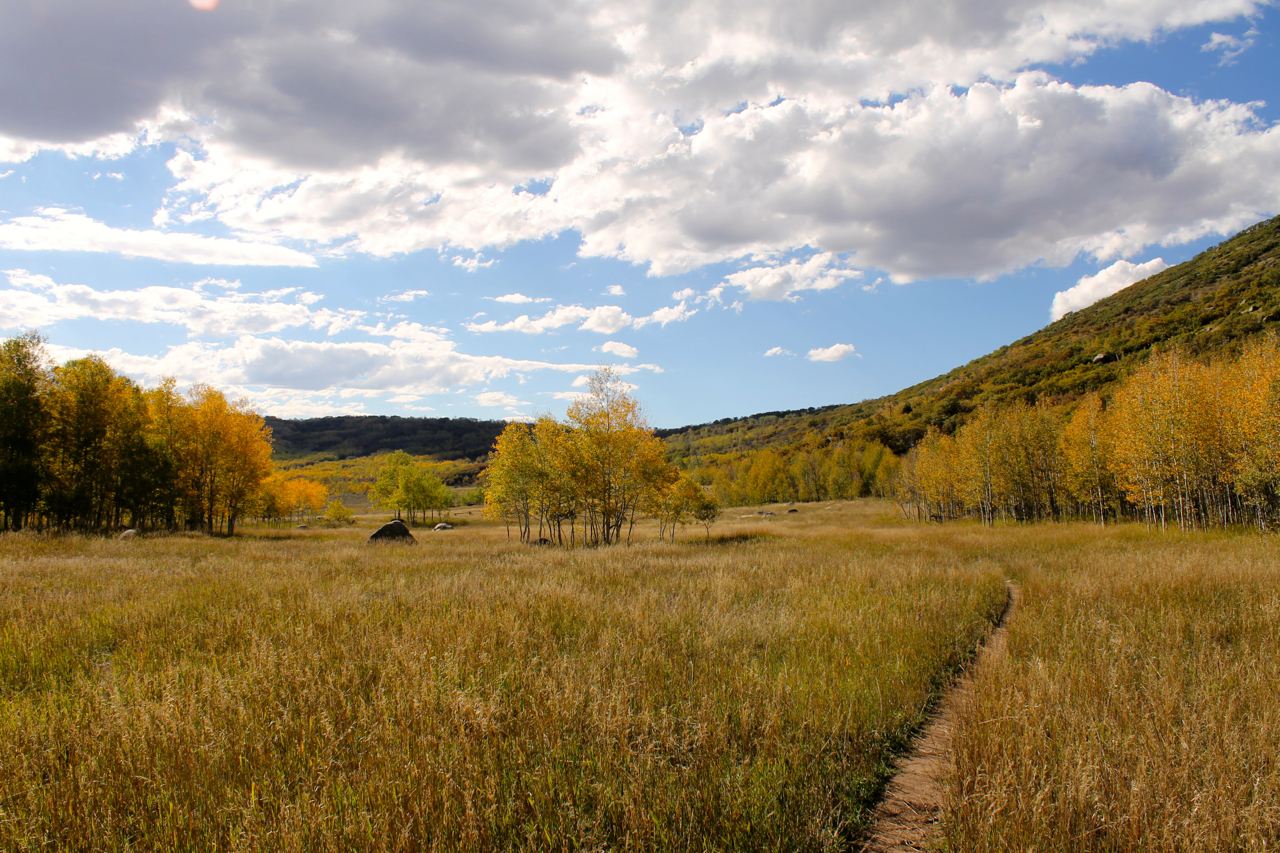 Eventually I did find a sign: the boundary of the Mount Zirkel Wilderness. At that point, I turned around and went back the way I had come. On the way back I found a fork and instead of going left where I had originally come from, I forked right and angled toward the ridge. Based on my map, somewhere around here was a cutover trail that would lead me to the Saddle Trail that I had passed earlier–but again, there were no physical signs to correspond to the trail names on the map. However, as I climbed up the side of a ridge and took a right on another trail, I was pretty confident I was heading the right direction. Eventually, I T-ed into another sweet swatch of singletrack, and finally there was a trail sign! The sign labeled the cross trail as the Red Dirt trail, so I had successfully found my way through the maze of animal paths.

When I was planning my ride, I wanted to ride the upper section of Red Dirt as an out-and-back to the Mount Zirkel Wilderness like I did with Swamp Park. But as I stood at the junction, I decided to just bang a left and descend back down to the highway.

And what a descent it was! While the lower section of the trail is indeed red dirt, the upper section should be dubbed “Black Dirt.” As I flew down swooping, bench cut loamy singletrack through a deep grove of aspens mixed with pines, I whooped and hollered as my tires bit into the rich dirt and railed the corners! Even if this trail was originally formed by hooves like the others in the area, work has definitely been done since that time to add modern benchcuts and switchbacks, while still preserving the backcountry feel.

As I descended lower down the trail, the tread got rockier and rockier, with some short, techy sections with a few decent-sized obstacles. Eventually, the short stretch of red dirt materialized as the trail traversed above the highway, dropping all the way down and hitting the pavement. A left turn and a short mile or two of pavement spinning brought me back to my point of origin.

When I got back to the trailhead I checked my Strava and realized that I’d only ridden just over 9 miles. So, I headed down the road about a quarter of a mile and picked up the Hot Springs trail.

Yet another old school piece of singletrack, the Hot Springs trail follows a tumbling creek up into the hills, eventually hitting a dirt road near Strawberry Hot Springs. Along the way, the trail provided great views of the turning aspens and the beautiful mountain creek.

However, unlike the buff, rolling trails I had just finished riding, the Hot Springs trail offered up quite a few rock gardens and benchcut traverses under small, craggy cliffs. I did ride it as an out-and-back, however, and almost all of the rocky sections were quite climbable. But the fun really began once I turned around to rip back down! While the grade was mellow, it was easy to pick up and maintain speed on the relatively straight rip back down the mountain. I hadn’t seen another soul since turning onto Hot Springs, so I opened it up and let it rip on the way back down–I had the whole place to myself!

Hitting the hardest feature on the Hot Springs trail:

After a ripping descent on an entertaining chunk of old school singletrack, I found myself back at the truck, with 16 miles of trail under my tires. Not bad for a quick afternoon spin!

We spent the weekend relaxing at The Inn at Steamboat. A small boutique hotel located up near the ski resort, the Inn wasn’t absurdly ritzy, but more than plush enough to allow you to feel pampered after a long day of riding. The rooms were beautifully decorated in a western style in keeping with Steamboat’s ranching culture, but the blissfully-soft beds belied the hard life of a wild west cowboy. This bed was hands-down the most comfortable bed that my wife and I have ever slept in.

We stayed in one of the valley view rooms, with a breathtaking view of the Yampa Valley spread out below us. In addition to in-room luxuries, the Inn also offers a delicious hot breakfast every morning, outdoor pool and hot tub, and a workout room if for some reason you didn’t get enough out on the trail.

Prices vary a bit from season to season, but the summer is generally slower than the winter season, so expect to get the better end of the rates if you’re coming to mountain bike. Room prices vary depending on the exact room and the day of the week, but they’re about $129/night during the week and about $139/night on the weekend, with an extra $20/night up charge for the valley view side.