Marin County, California, just across the Golden Gate Bridge from San Francisco, is renowned as the birthplace of the sport of mountain biking. While some locals from Crested Butte might contest that claim, it is pretty much agreed that Marin County was home to the first mountain bike race, Repack, held on the gravel service roads of Mount Tamalpais. Marin gave rise to many riders who are now legends in the mountain bike world, including Tom Ritchey, Gary Fisher, and others. For more information on the birth of the sport, be sure to watch the documentary filmKlunkerz. 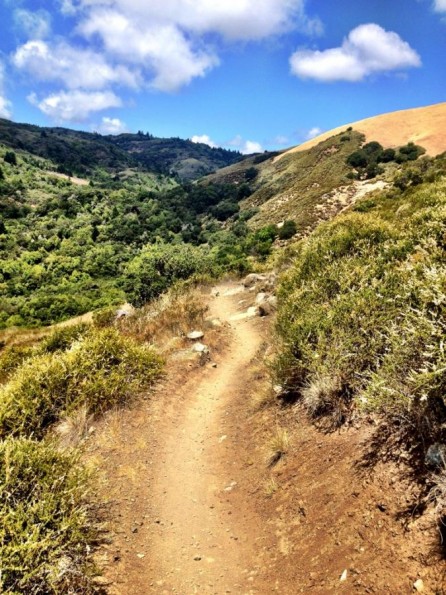 Despite Marin Countys storied history and long ties to the sport of mountain biking, it is no longer the mecca that it once was. Back in the late 1970s and early 1980s when the sport was born, mountain biking was so new that no legislation existed to say one way or the other if bikes were allowed on the trails. Back in those days, hikers viewed mountain bikers as a novelty and an amusement, but as the sport continued to gain traction the local land managers and hikers were quick to ban mountain bikes from almost all of the singletrack trails in Marin County.

At present, there are only two main singletrack trails in the entirety of Marin County that are legal to ride a mountain bike on: Camp Tamarancho and China Camp. 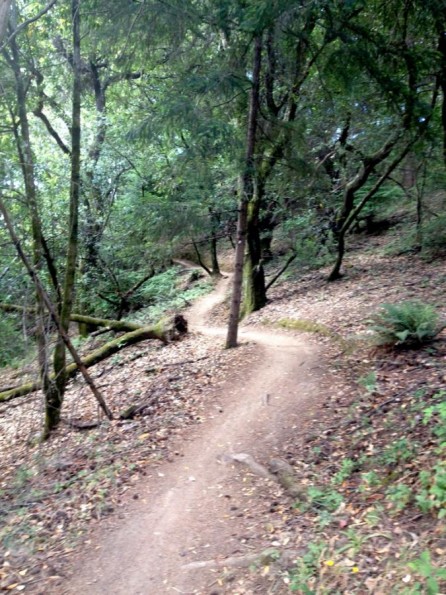 Getting my flow on.

Camp Tamarancho gets its name from the Boy Scout camp on whose land it resides. The Boy Scouts built and maintain the trail, and have been gracious enough to embrace mountain bikers and buck the Marin County trend of banning bikes. In an act of gratitude, mountain bikers pay $5 for a day pass to the trail (which can be purchased at the local bike shop, Fairfax Cyclery).

Since there is not really any parking to speak of at the trailhead, its a good idea to just park at Fairfax Cyclery, buy your pass, and climb a couple of miles on pavement to reach the singletrack. Once at the trailhead, the trail is laid out in a lariat-style, with most of the locals riding the loop portion clockwise. 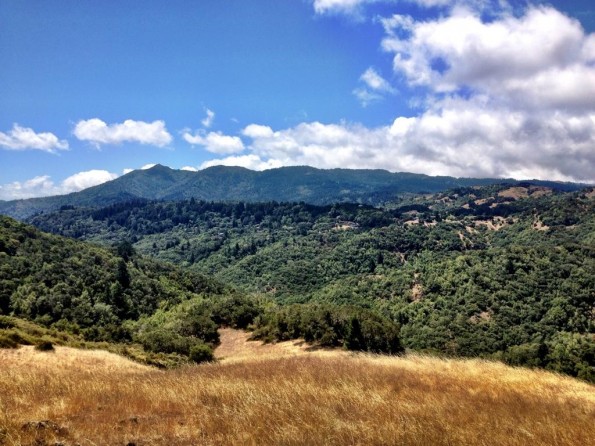 Camp Tamarancho is a well-built trail that passes through a smorgasbord of different environments, ranging from the deep forest beneath the redwoods to the dry rocks along grassy hilltops. While most of the trail is relatively easy (yet still fun), there are several technical spots to keep you on your toes (the most difficult of which feature easier bypasses for those who arent so sure of their bike handling skills). After riding in the East Bay, getting to sink my tires into the delicious singletrack of Camp Tamarancho helped convince me that maybe not all of the San Francisco Bay Area is quite so bad. 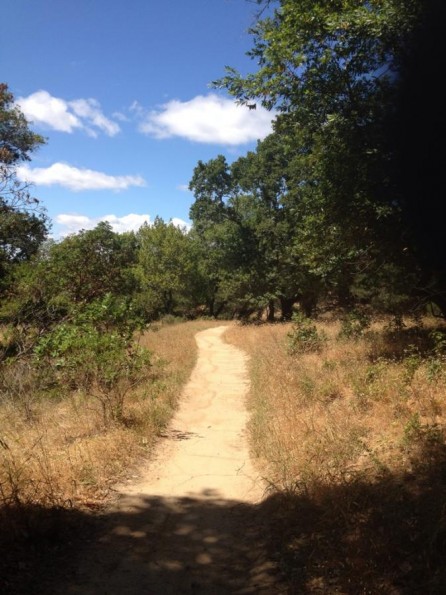 China Camp State Park is located right on the San Francisco Bay, and the mountain bike trails offer several gorgeous views of the water. The singletrack here is much smoother and less technical than Camp Tamarancho, but there are still a couple of fun climbs and descents to be had for more advanced riders. 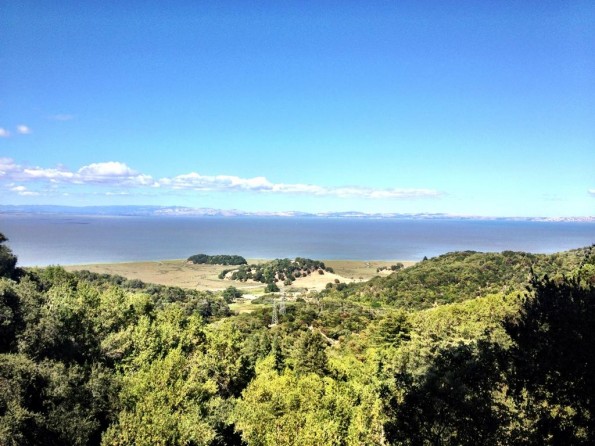 View of the bay from the trail.

While this is the perfect place to take beginners to the sport due to the easy-yet-fun flow of the singletrack, be warned: the entire loop is about 12 miles in length, which will still be too much for true newbs. But for riders with the legs to tear it up, the 12-mile ride offers a great workout, especially if you do a couple of laps.

Another bonus to riding at China Camp: where else do you get to have lunch with a view like this? 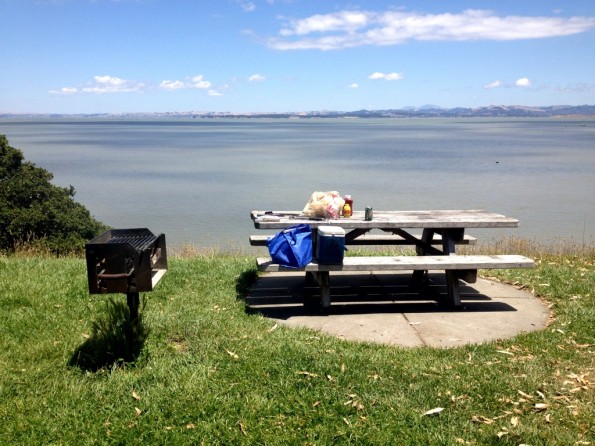 While Im sure there are many, many more trails in Marin County, and many of them probably outshine the two listed above, I was glad to roll along some legal singletrack that was a true joy to ride, as compared to the no bikes signs lining the forest roads of the East Bay.

Coming up next: riding on the peninsula to the south of San Francisco at El Corte De Madera.

Great trip report. While there are only a couple trails to ride in Marin County it’s still worth the trip in my opinion, if for no other reason than to see the place where MTB got its start.

Does anyone know if it’s possible to ride the Repack fire road these days? From what I understand the course was mostly (all?) fire roads which, by today’s standards, isn’t all that exciting but you’d think a fire road would still be open to bikes. I also thought I heard about a special race on the original course coming up soon (or maybe it just happened)…

This answer comes four-years after the question was asked, but yes, Repack is open to bikes. It’s stupid steep wide fire road, but alas, open.

That smooth flow at Camp Tamarancho looks like a blast! Where are the rocks and roots? Oh, wait, it’s not New England. 🙂

@Fitch, there are a couple of rocky spots, but not many!

“the trail is laid out in a lariat-style, with most of the locals riding the loop portion clockwise.”

@Jared13, where there is a straight section of trail that you ride to reach a loop, a loop you go around, and then you return on the same section of trail that you rode to reach the loop. Think of what a lasso (aka lariat) from the old west looks like. This is also sometimes referred to as a lollipop. Its actually kind of surprising how often you’ll see this sort of trail design!

You know, f**k the bay area. It is suffocating. Too many people. it is not worth it: traffic, overregulation, “everything, all the time”

@dcluley and Greg
Ahhh, thanks!

I’ve heard of a lollipop design before, the lariat and lasso are new to me.

Mt Tam IS the first place I rode a mountain bike, before most of the closures. There is some tech at China Camp but found none of it the first time there. A local showed me around the second time and I saw trails that were totally different and better than the first. Don’t miss hitting Hitler trail.The views of the bay are super for me as a desert rat and so are the tempratures. Another place to ride is on the Golden Gate Bridge for the temps in the 50’s (jacket suggested) and great views. More cyclists and walkers than almost anywhere, nice place for a chat. Tennessee Valley Trail in Tamalpias Valley has a trail to the ocean, think it’s still open to bikes but I haven’t ridden it in a decade, easy. Nearby Dipsea Cafe is a favorite!

Um… it’s not actually MY birthplace.