After riding 6 trails in less than 24 hours on Friday and Saturday, I was actually glad to have a break Sunday morning before driving up to Gainesville, GA. Fortunately the weather was amazing with blue skies and temperatures in the low 70s for my afternoon rides. 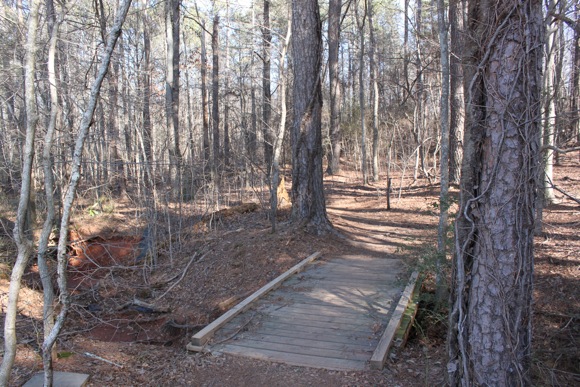 The mountain bike trail at Gainesville College is a 3.5 mile loop starting at a parking lot on the back side of the campus. I had never ridden here before despite riding nearby Chicopee Woods dozens of times and frankly I didn’t have high hopes. I assumed the trails were probably bootlegged singletrack created by rowdy college students looking for a way to blow off steam so the SORBA trailhead sign was definitely reassuring. There were half a dozen cars with bike racks in the parking lot already and I watched as a mom and dad started out on the trail with their two young sons. 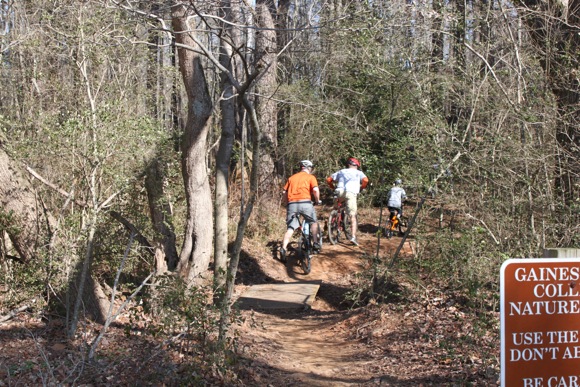 It turns out the Gainesville College trails are the perfect introduction to singletrack for kids and families. With only a couple tricky rooty sections, the smooth trails never climb or descend steeply and all the creek crossings feature smooth, wide bridges. I’m guessing the length of the loop – 3.5 miles – is just long enough to give kids a sense of accomplishment without being overly difficult. With zero bailout points it also teaches new riders the power of perseverance! 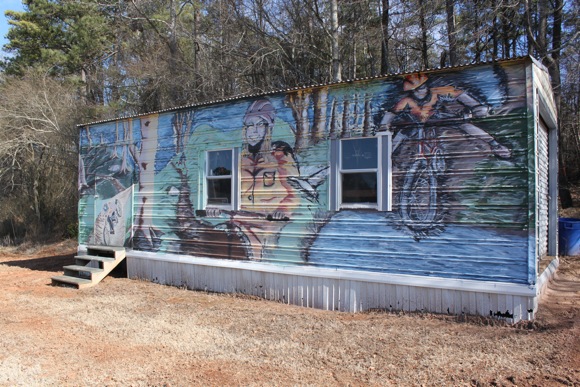 SORBA work trailer with bike hanging in the window.

I had a good time on the trail and I saw at least 4-5 groups with kids under 10 years old riding mountain bikes. I can’t wait until my daughter is old enough to ride a mountain bike – this will be one of the first places I take her off road! 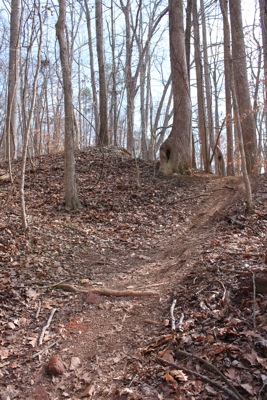 I had every intention of just clocking a few miles at Chicopee Woods on Sunday and calling it a day. After all, I didn’t set any ground rules at the beginning on my 29 Trail challenge saying how many miles I had to ride at each trail or if I had to ride the entire thing (which would have made trails like the Pinhoti impossible to bag). I set out on the Tortoise trail and felt surprisingly good, passing riders as the trail wound slowly up the hill. Coming down the back side was a blast and it was then that I decided to enjoy the ride instead of worrying about how I was going to get to 29 trails before Saturday.

On the Red Tail loop I passed a couple on a tandem mountain bike and I had two thoughts: 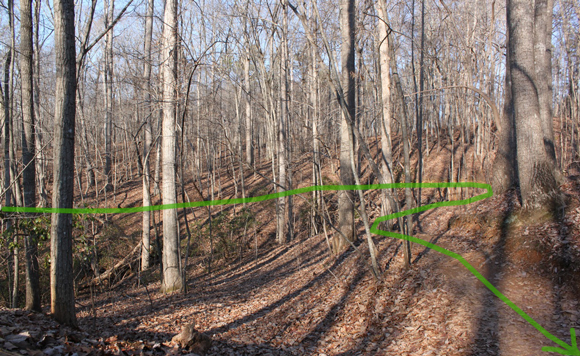 From the Red Tail loop I continued onto White Tail/Outer loop and took the Copperhead Gap trail option. There were at least a couple sections on Copperhead Gap that flowed so well that it was as if God himself had built the trail. Then again, there were a few short root gardens that were clearly the work of the devil so it all balanced out. Good vs. evil but in the end, good definitely wins here. 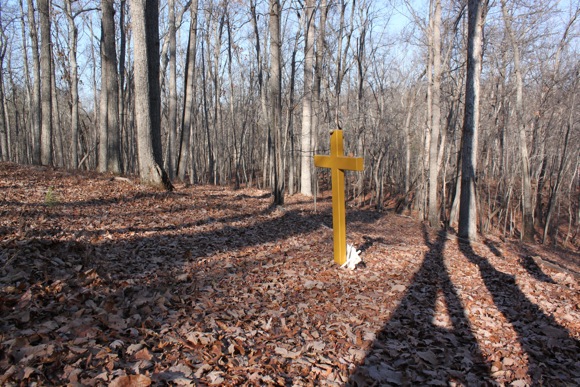 At the top of Copperhead Gap I got back on White Tail and continued around the Outer loop. I stopped to check out a memorial I had never noticed before for a plane crash that happened at this spot in 1995. As I crested Champain Hill near the end of the loop I was in the mood for a little more riding so I jumped onto the Inner Loop. The trail didn’t seem familiar at all – perhaps I’d missed it all the other times I had ridden Chicopee before? I found more fun, flowy singletrack to rival Copperhead Gap and was glad I took the option.

By the end of the day I had clocked about 17 miles of singletrack at Chicopee Woods in under 2 hours which felt great. Aside from a couple short connector trails, the only loop I skipped was the Coyote Loop – which hardly anyone ever rides anyway. I also managed to stay in my big ring the entire time which bodes well for my training thus far. Less than a week (and 6 trails) to the Snake Creek Gap TT #2!

6 trails and 5 days left. Rained yesterday and today. Friday’s forecast is more rain. Hope you can find some stuff that drains REALLY well for Wednesday and Thursday. Or maybe some of the not so fun forest road rides if all else fails? At least you can ride those when it’s wet and not feel like you are tearing stuff up. Good luck.

BTW, Chicopee Woods is easily my favorite trail system in the metro area. You can get ~25 miles of riding if you link it up with Gainesville College and ride everything. 99% of it is singletrack too!! Keep up the good work Gainesville SORBA!

bring a gun to the trails and shoot the roots like there’s no tomorrow,I don’t think I’ve wiped out more times on anythnig else than roots haha and I ain’t talkin’ .22, 50 cal. HAHAA c: