When my wife and I relocated to Salida, Colorado in September, it wasn’t lost on me that Moab, Utah was located a mere 5-hour drive away. It also wasn’t lost on my that the mountain biking in Moab is pristine when most other parts of the nation are still blanketed in deep snow. In fact, a winter/spring Moab trip has been on my wishlist for years, and now that I live so close, it’s time to make it happen!

However, try as I might to plan a trip, something always came up, thwarting my daydreams of dry desert slickrock and warm sun on my skin. But as the month of April drew to a close, I put my foot down: I was going to Moab before the end of the month, come hell or high water!

As it turns out, hell didn’t come, but high water did… at least, for Moab. A big storm system swept through the area on the Saturday we planned to go, raining most of the day and through the night. While we adjusted our plans to put us arriving in Moab on Saturday instead of Friday, this rather-unusual rainstorm–at least, for the desert–allowed me to capture this awesome image of a cloudy sunset over Moab: 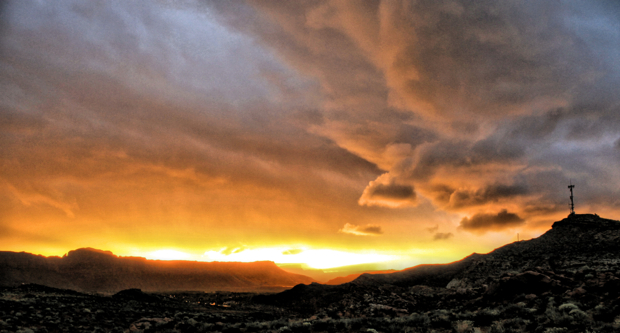 And, while it rained hard through the night, our brand-new Sylvansport GO kept us warm and dry: 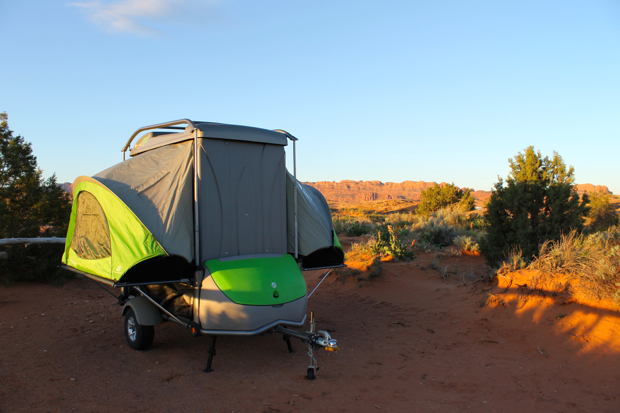 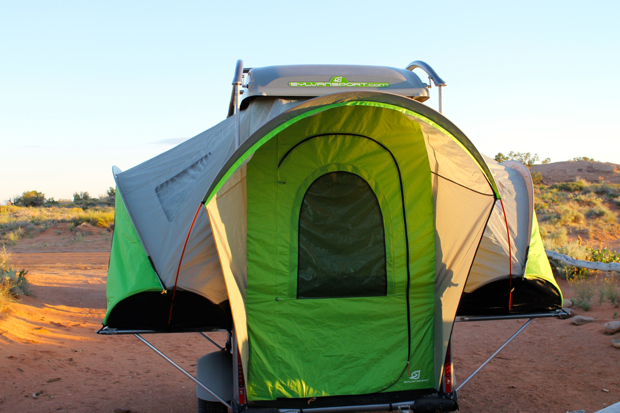 I awoke early Sunday morning to clear skies and cool temps, and the dry Moab sand had already soaked up the rain from the previous night. Trail conditions promised to be prime! Since I was planning to work and ride in the evenings the next few days, I decided to spend Sunday riding the trails I really wanted to investigate: Hymasa, Captain Ahab, and the other trails in the Amasa Back Area Trail System.

Amasa Back Area on Singletracks.com

The Hymasa trail had just opened in March and was not yet in the database, so I was stoked to investigate and catalogue this new trail! 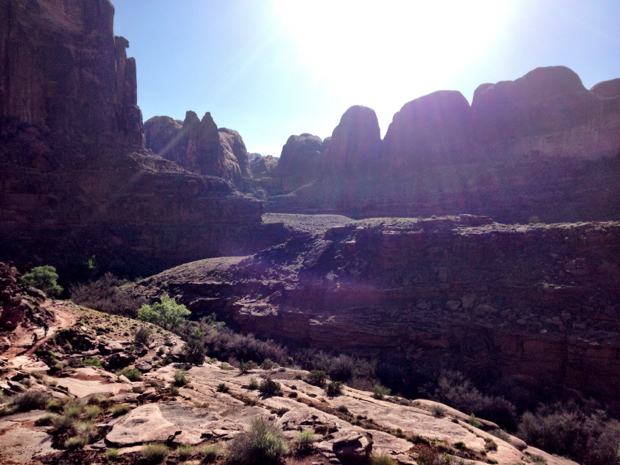 After kitting up in the shade of the massive Moab cliffs, I began my climb up the new Hymasa trail. While one segment where Amasa Back crosses a creek is still the classic 4×4 route, the singletrack quickly heads away from the motorized route, climbing up the hillside at a moderate grade. It winds back and forth, crossing the 4×4 route at regular intervals. Unlike the steep, ledgy Amasa Back trail, Hymasa is all very rideable as a climb. There are plenty of techy sections to keep you on your toes, and a few steep grunts up slickrock, but everything is still very rideable, even for mere mortals. However, thanks to the techy bits, interesting trail design, and world-class Moab views, this 4-mile climb will be gone before you know it!

This was the first time I had the privilege of visiting the desert in the spring, and I quickly realized that it was entirely different than riding here in the summer or the fall! Everywhere I looked, green plants were sprouting up, and all of the cacti were in bloom, adding lush color to the normally arid landscape. 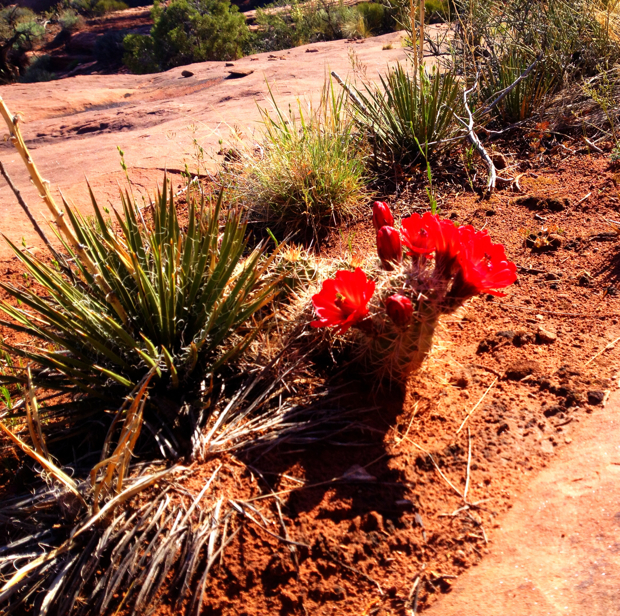 As I extended onto Captain Ahab, the incredible views continued. I’m glad we don’t have to shoot with film anymore, because I would have dropped a ton of money on this ride! 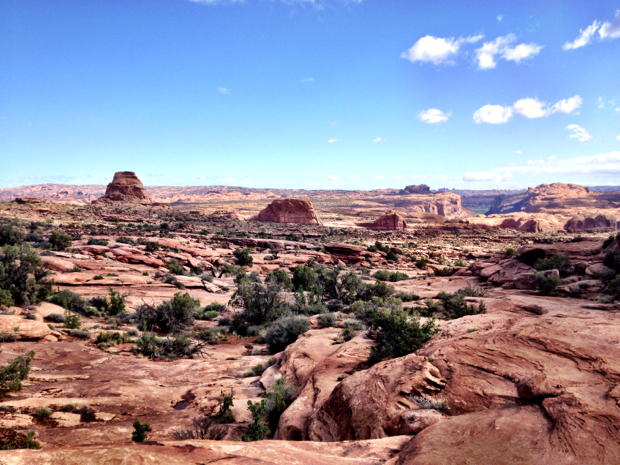 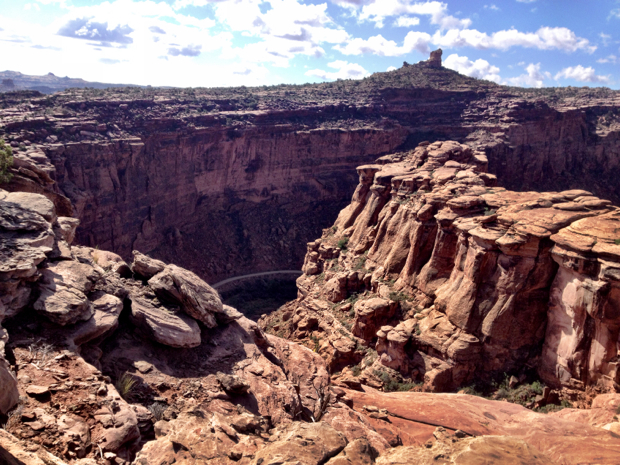 Captain Ahab is an absolute masterpiece of a descent! I say descent, as that’s mostly what it is, but there are a couple of short, pedally climbs mixed in. This new-school Moab trail is an absolute riot of twisty turns, exposure, technical moves, and air opportunities. But the beauty of this trail is that, for the most part, you can make it as difficult or as easy as you want.

Don’t want to take air? That’s ok, all of the drops are rollable or set off of the main line. But if you do want to get air, there are plenty of rollers to launch, optional ledges, and air opportunities of all kinds and sizes! Just make sure  you don’t try taking air near the sign that says “walk your bike,” or you could find yourself flying off into a beautiful abyss. 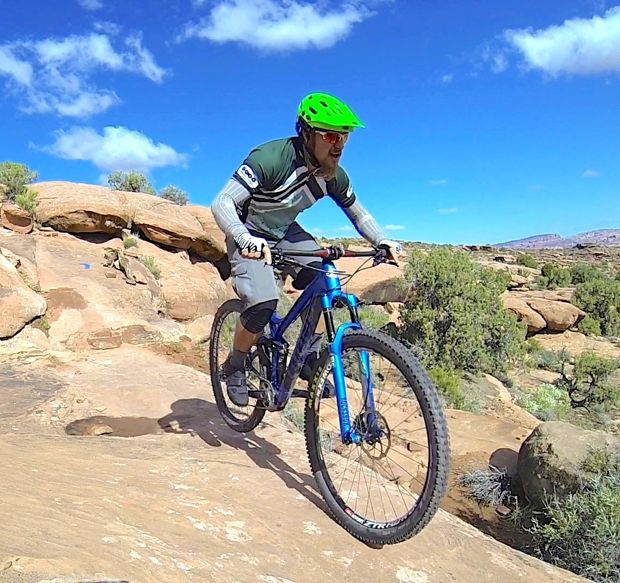 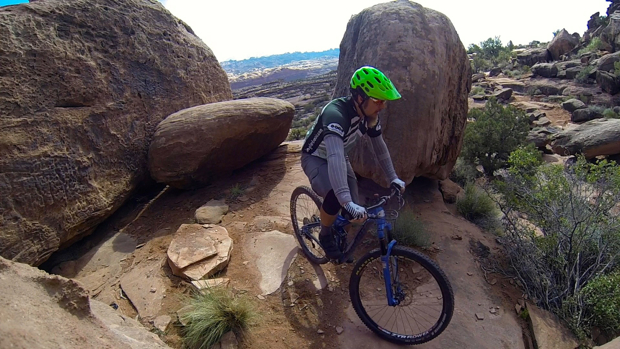 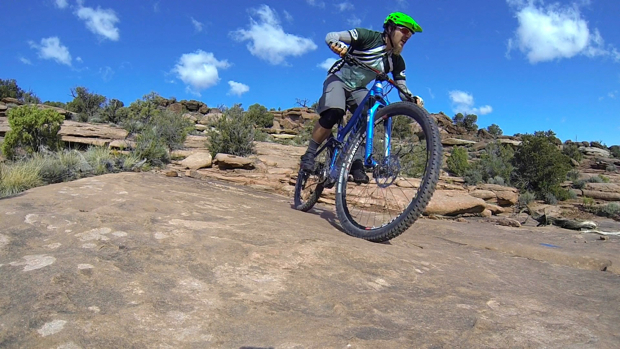 Simply put, the new Hymasa/Captain Ahab loop might just be the best loop-style ride I’ve ever done! Combine the fabulous, completely-rideable, absolutely-gorgeous climb with the raucous, entertaining, highly-versatile descent, and I had a very difficult time keeping myself from looping it again and again and again!

However, I did climb back up the mountain to check out some additional singletrack. At first I began climbing the classic Amasa Back 4×4 route just to see what it was like, but I quickly realized how ledgy it was and not at all fun as a mountain bike climb so I reverted back to the fantastic Hymasa ascent.

At the top, I explored some more of the trails in the area, including the highly-technical Rock Stacker and the short-but-sweet ride out to Pothole Arch. Finally, on the way back down I made a difficult decision to bypass Captain Ahab in favor of experiencing the Amasa Back descent.

While of course it couldn’t hold up to Captain Ahab’s majesty, this was a very different descent: wide 4×4 road, big ledges, nasty technical spots, but plenty of line options for more or less difficult obstacles, ala Porcupine Rim.

While historically Amasa Back was a single 4×4 route that dead ended near the top of the rim, all of the recent trail developments here have transformed it into a true mountain biking trail system, with non-motorized singletrack that, I argue, can compete with the best anywhere in the nation!

For more fresh dirt from Moab, and ride reports and destination features all summer long, be sure to follow Singletracks on Facebook!

Community
Kate Leeming on Exploring the Planet by Mountain Bike
Gear
Our Most Popular MTB Product Reviews of the Year
Gear
These Bikes are Lightweight, Affordable, and Made for HS Mountain...
Gear
The Marin El Roy Hardtail is Very Slack, But it's...
Subscribe
Login
Please login to comment
8 Comments
Most Voted
Newest Oldest
Inline Feedbacks
View all comments

And the rich get richer! It’s crazy that Moab has been such a draw for mountain bikers for literally decades and yet folks are still working to open new trails.

Sorta feels like an arms race between established and up-and-coming MTB destinations. And Moab isn’t backing down!

Agreed, it totally feels like an arms race. And for those of us who travel to ride, it’s a win/win situation!!

So many trails, so little time!

Another great option…Mag 7 to the Portal. Epic!

Less of an arms race and more of a change in how people ride.

It’s funny… when I first started riding Moab we had to get tiny, front chainrings to make it possible… and had to carry our bikes at times… then bikes got better and came equipped to tackle Moab… but now the riders don’t want to tackle things… so everyone, everywhere are making flowing trails… and now the rigid steed I had in the beginning could ride these trails…

Great article and awesome photos! That is the perfect bike for that trail too 🙂

I guess I’m the odd man out on Moab. I had a good time there and enjoyed the rides I did *for the most part* but Moab was not the Mecca of MTB riding I expected it to be (for me). I did the same Amasa to Ahab loop that Greg did and it had it’s moments but they were few considering the length of the ride and the biggest dissapointment to me was Lower Porcupine. I’ve never seen so much fire road that is considered (and raved about by so many) a mountain bike trail. The last 3 miles were awesome but the 5 miles before that was THE WORST section of trail I’ve ever ridden on a trail that is widely considered as world class.

I was so disappointed in Moab (I think I expected too much due to all the hype) that I cancelled a return trip I had planned in October and I’m going to Cabo instead.

Despite riding The Whole Enchilada on my first visit to Moab (which might be my favorite route of all time… and is exponentially better than just doing Porcupine), I was a little underwhelmed with Moab on my first experience too. But then I came back again… and again… and I’m planning to go back a couple more times this year…

I think the difficulty is that there is SO MUCH to ride in Moab that it can be difficult to find the trails or the type of riding that appeals to you specifically. But you can be pretty confident that hidden somewhere, either up in the La Sals or at the end of a canyon, Moab has a trail that will light your fire!

Loved Moab in 2011 and loved the challenge of climbing the ledgy Amasa features. Rock stacker was fun as well. My favorite ride was shuttling up to Hazard County and ending with Porcupine Rim. I’m from the Midwest and although I cherish IMBA epics such as Berryman, Brown County and Switchgrass and the rocky tech some Ozark trails have to offer, the wide open rocks and breathtaking vistas of Moab are such an adrenaline rush I plan to return often.