The vast majority of the trails that I had the pleasure of riding during my time in Sweden were easily-accessible with a short pedal from town. The Kinnekulle Trail, on the other hand, required a trek inland.

Located a two-hour drive from Gothenburg, we quickly left the city and coastline behind. As we journeyed inland, Leo and Natasja kept asking me, “does this remind you of anywhere in the States?”

By “home” I meant the Midwestern US. While Gothenburg itself and the coast was unlike anything I’d ever experienced before, as we drove deeper into the heart of Sweden, the rolling fields punctuated by strips of trees and patches of forested areas were really quite like farm country in Wisconsin. Of course, there were the occasional differences… as we drove from one trailhead to another, Leo pointed out the window and said, “that’s one of the oldest churches in this area. It was built in the 1100s.” A thousand years old! That right there blows my hicktown USA mind.

However, as we approached the starting point for our ride, we saw Kinnekulle off in the distance. Kinnekulle is what passes for a “mountain” in this area, and while it wouldn’t nearly make it by Colorado standards, I’d be willing to bet that Wisconsinites would call it a mountain, too. The top of what Wikipedia refers to as “a hill or ridge” peaks at 1,004 feet above sea level. With the flat pastoral countryside all around it, Kinnekulle is visible from many miles away.

That said, really only half of Kinnekulle is bordered by farmland. The other half of the mountain plunges into the waters of lake Vanern, the largest lake in Sweden. The irony that we left the ocean and then journeyed inland two hours only to arrive at a lake that might as well might be the ocean wasn’t lost on me.

Thinking back to the Midwest, looking out on Vanern reminded me of what it felt like to visit the Great Lakes. At certain points you can see across inlets or bays, but if you looked out towards the body of water, the sloshing blueness curves away with the shape of the planet… just like an ocean.

Our ride began with a steep hike-a-bike/pedal up the flanks of Kinnekulle to an overlook of an old quarry site. From there, we kept following the orange blazes and blasted back down the mountainside, heading away from the hill posing as a mountain. Initially I had been confused about how the Orange loop, which we were following, could be almost 30 miles long, after seeing how large (or not large) the “mountain” was. And while the trail makes great use of the elevation, much of the mileage makes use of the flat terrain surrounding the mountain.

Ironically, overall the Orange trail at Kinnekulle is the most cross country-style trail that we rode all week, as the singletrack is much smoother on average than what we found in Gothenburg. However, at the end of our ride we ripped the longest, fastest descent of the trip… so take that dichotomy as you will.

After our first small descent off the mountain, we pedaled delicious singletrack that alternated with gravel roads and gated wagon tracks. We followed the trail over fences and through gates, riding through farmers’ pastures and connecting into magical woodlands filled with blooming wildflowers and grazing fallow deer, a variety of spotted deer not found in the US.

While the scenery was magical and idyllic, the weather had other plans, and we felt warning sprinkles and heard ominous rolls of thunder.

Along the way, we stopped at Lasses Cave, the homesite of the last cave-dwelling Swede, who moved here to protest government taxation. He and his family lived in this small two-room cave, hunting for food and living off the land, from 1880-1910. 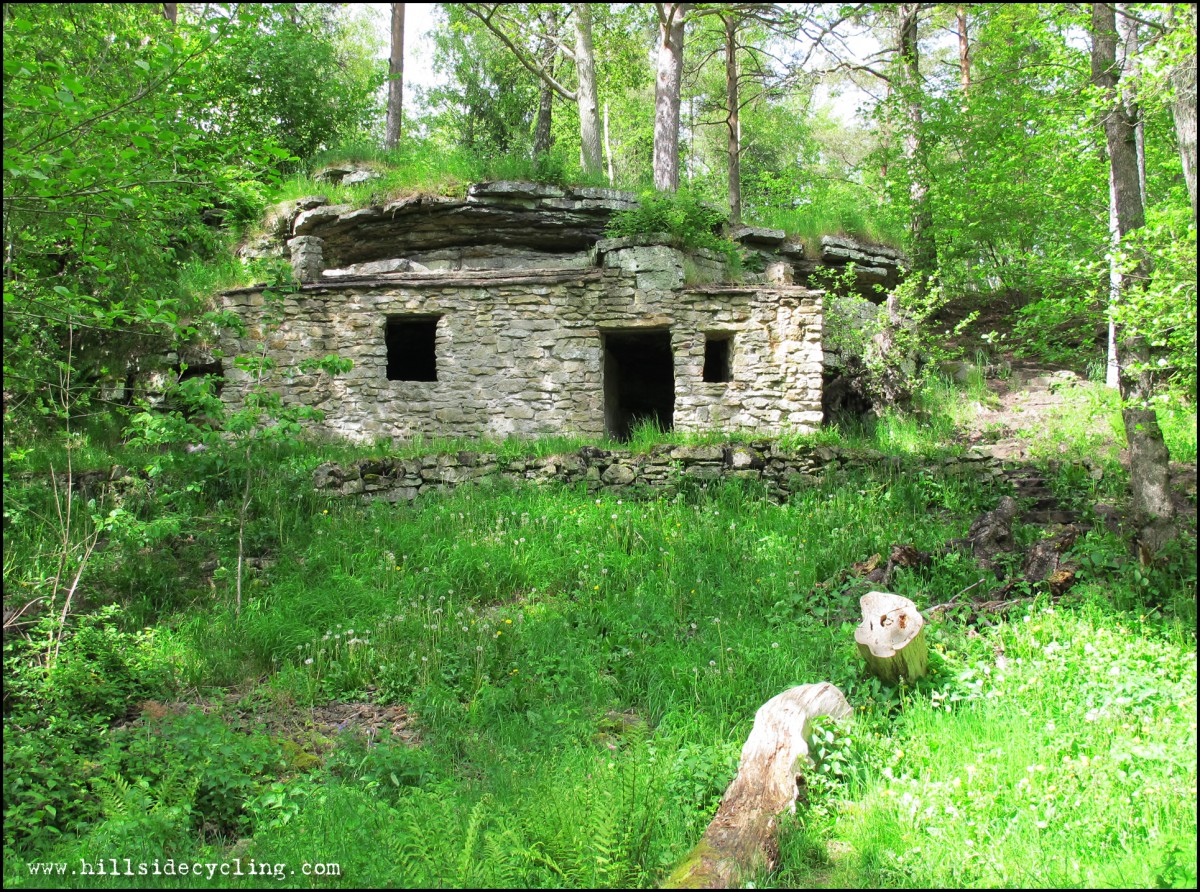 Eventually we left the flatlands and climbed our way up to the mountain top. The view from the top was absolutely breathtaking, but we didn’t stop for long: when we turned to look out over Vanern, part of the lake was totally obscured in a storm cloud and pouring rain that was moving our way… and fast.

We dropped into the longest, fastest descent of the entire week, ripping down a straight, fast, semi-smooth singletrack that dipped and rolled down the mountainside. During our descent the rain caught up with us and began pouring down, followed by hail and driving winds.

At a convenient road junction, Leo and I stopped and huddled under an overhang, and called Natasja for evac. We’d completed the majority of the singletrack, and weren’t really interested in suffering through a downpour just to say we’d completed the loop.

We were running quite late, but the great folks at Vigrum restaurant went out of their way to wait on us.

Vigrum was totally different from all of the city restaurants that we visited during our trip. Instead, Vigrum is located on a farm, in the middle of a field, essentially in the middle of nowhere. It’s not far from Kinnekulle, but it’s really not on the way to or from anywhere.

The buildings are gorgeous, the interior is charming, and the setting with wildflowers blooming in a field right outside the window as you eat is unbelievably peaceful.

As for the food, Vigrum prides themselves on serving all local, organic food–and it’s delicious. With everything from local juices and apple must (cider), to the healthy portion sizes, and the delicious beef and lamb roast that I enjoyed, the entire experience was the perfect cap on the day.

Over the course of my time in Sweden I stayed at two hotels. The first one I only spent two nights at, but it immediately felt like home.

The only thing to let you know that Tidbloms is a part of the Best Western chain is that there’s a small placard outside the hotel with the Best Western logo, and the key cards also have the logo imprinted on them. To give you a sense of what Tidbloms is like, in the US it would be billed as “Historic Tidbloms.” In Gothenburg, it just is.

Since the building was originally built around the turn of the century, the rooms are pretty cozy and there are no modern amenities like air conditioning. However, the high vaulted ceilings and being able to open the window and lean out, looking down on the street below, is more than worth it!

The biggest surpise I experienced at Tidbloms was getting up the first morning and heading down to breakfast. The continental breakfast hall felt like the cellar of a castle, with arched brick doorways that spoke of an age long past. 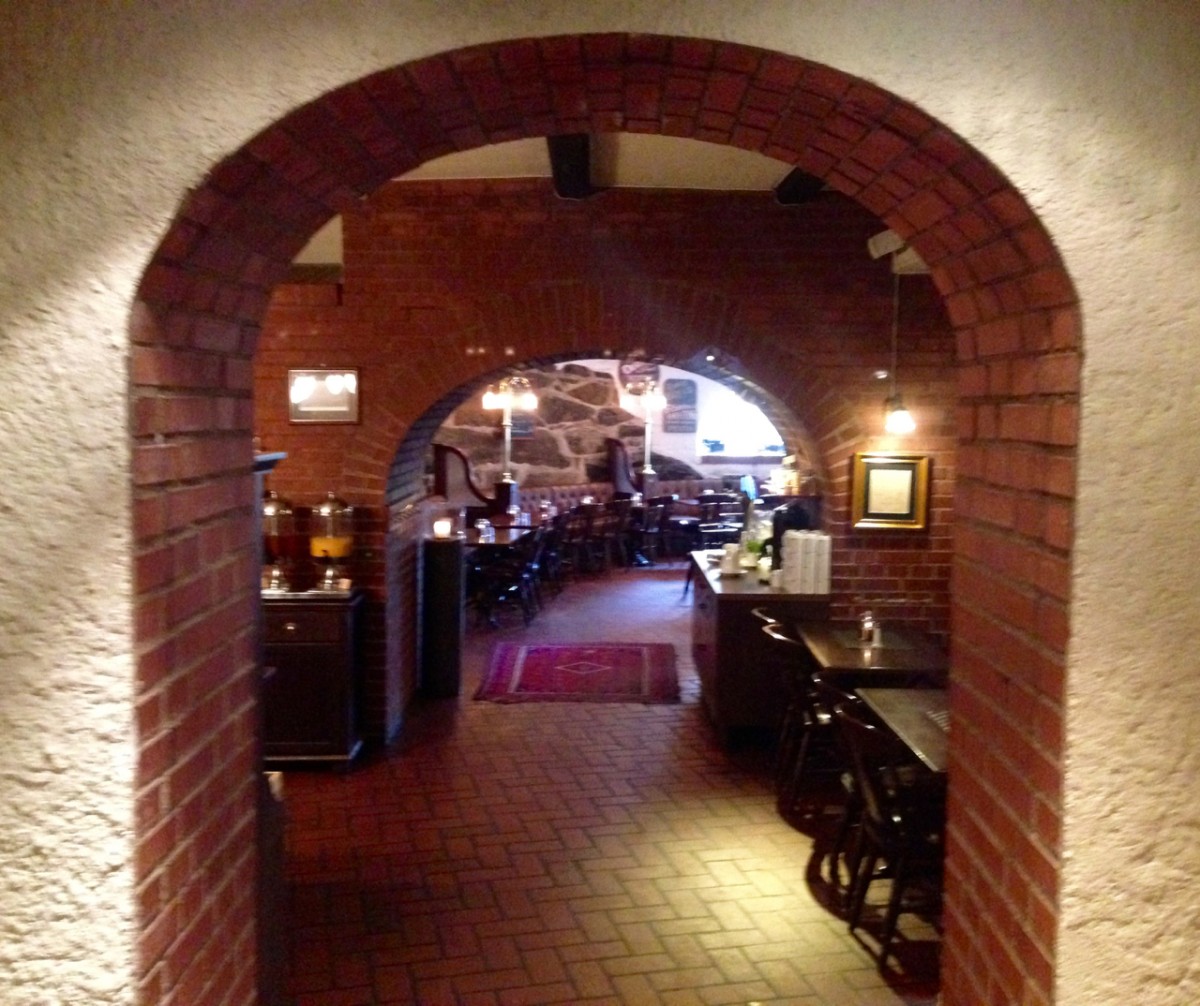 But what most surprised me was the food.

To date, this is the best continental breakfast I have ever enjoyed! I’ve been to maybe one or two places with more options, but the quality of the food here was second to none. There were more types of bread than I knew what to do with. They actually served real bacon, not that facon crap. They had a salad bar and a yogurt bar with fresh fruit and granola. They had more food options than I could even sample over the course of two mornings, despite being a relatively-small hotel.

Simply put, it was phenomenal. And it was the perfect start to a day of riding: it’s crucial to get a good meal into your belly before pedaling all day.

When out of town guests ask Hillside Cycling for lodging recommendations, this is the first place that Leo and Natasja recommend. For one, it’s awesome and low key. For another, it’s literally two blocks away from their flat, and also has extremely convenient access to the Skatas area. And as you know from this article, Skatas is ground zero for Gothenburg mountain biking–from Skatas, you can pedal just about anywhere in the region almost entirely on dirt.

You set the bar for being a explorer Greg. Your pic’s are so cool. The landscape there could make it hard to focus on the trail. Just mesmerizing. Nice job sir. I love it !

Thanks for the kind words, Schmo! So glad you’re enjoying the coverage 🙂