The itinerary for our final day of the ultimate spring break mountain bike road trip included two rides in Cortez, one familiar and famous, the other unfamiliar and obscure. The first would be the rightfully touted Phil’s World trail system on the west edge of town. Mtbikerchick recently gave us a good article on this route so I won’t go into much detail about this one other than to point out that, if you haven’t done Phil’s in a while, an option for another two miles has been added near the end of the ride. This was my third time at Phil’s and it was everything I remembered it to be. As for Miniskibum, it was his first go at Phil’s and he seemed to enjoy it even more than I expected he would. What a great way to start our final day!

After finding the trailhead, however, we were quickly steered away from our original intent. By all appearances, the trail doesn’t get much traffic and had apparently seen zero traffic so far this season. The surface was very soft and yet there was not a single knobby print to be found. We started out only to find the pedaling on the soft (not muddy, just a bit “cushy”) surface was inordinately taxing for the amount of fun the trail was delivering. What’s more, the lack of use made the trail very difficult to follow in places as any sign of the trail disappeared completely. After about a half mile of this unsatisfying riding, we made the decision to skip the next five miles. This may be a good route later in the season, but for the last week in March, we declared this one a lemon.

So, when life gives you a lemon… you just drive on to Durango. I hadn’t originally planned on a Durango stop, fearing it was too early in the year and all the good stuff would be snowed in. However, the folks in the local bike shop informed us that, with the exception of the north slope at the far end of the ridge, the Telegraph Trails were all dry and in primo condition, so we set out to the trail.

Telegraph wasn’t particularly high on my wish list because I thought it was just where you went in Durango when you couldn’t get to the high country where the real rides are. This prejudice would soon be debunked as this network proved to be highly worthy of its own accord, regardless of its proximity to the great high country rides. Again, mtbikerchick covered this area in her article, so I won’t go into great detail, other than to point out we stayed in the northern portion of Telegraph where you’ve got to start with a significant climb up a rocky doubletrack before you get to the good stuff.

Once at the start of the singletrack options, you’ve got the Meadows Loop on the east side, which is buffed and fast and the ridge on the west, which is where the techy bits are. We rode the Meadow loop and then proceeded onto the ridge, which proved to be far more fun than I expected. Riding the ridge from north to south, you’ve got spectacular vistas on both sides and a great variety of technical goodies under your knobbies. As you approach the south end of the ridge, you’ve got a number of options for descending. The one Miniskibum and I took couldn’t have been more fun and we ranked it with the best descents of the entire trip. Although fairly short, it had rollers, ledges, sudden corners and tons of transitions. This ended up being an exciting and most fitting way to end our knobby-tired adventure and we finished with yet another perma-grin on our faces.

Here are our stats from the Ultimate Spring Break Mountain Bike Road Trip:

Trip Duration: 10 Days
Miles driven: Almost 2,000
Days spent riding: 10 Days
Rides on itinerary: 20
Rides expected to actually be completed: 8-12
Rides actually completed: 16
New rides added to my list: 14
Miles Ridden: Approximately 180 (about what Greg does in a single weekend, but it was a big 10 days for us)
Flats: 9
Major Mechanicals: 2
Endos: 5
Dislocations: 2 (both on the same finger)
Cactus spines embedded in flesh:  somewhere between 103 and 105
Smiles, giggles, and killer endorphin rushes:  Too many to count! 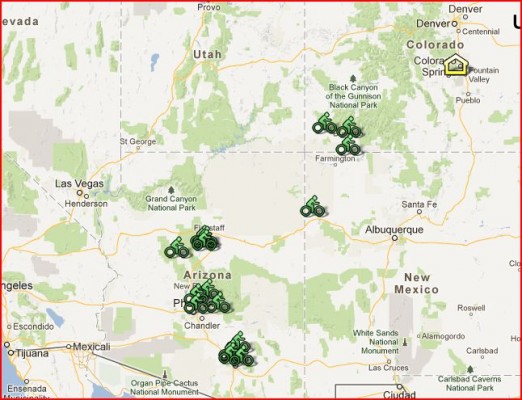 Most rides left some kind of enduring impression on us. In that vein, here’s our list of awards:

The Best Scenery without all that Exposure and Technicality Award: Chuck Wagon/Mescal, Sedona, AZ

The Best Ride in the Middle of Nowhere Award: Alien Run, Aztec, NM

The Ride Where You’re Most Likely to Get Blown Right off Your Bicycle Award: High Desert, Gallup, NM

The “Are You Sure We’re Not Back in Colorado”? Award: Granite Basin, Prescott, AZ

Skibum’s I Wanna’ Go Back and Do That Again Award: 50 Year Trail, Oro Valley, AZ

Miniskibum’s I Wanna’ Go Back and Do That Again Award: Phil’s World, Cortez, CO

The Wow, That Was a Pleasant Surprise Award:  Telegraph Trails, Durango, CO

In the end, this proved to be far and away the best bike vacation I’ve ever had. Only once in the past had I ridden 10 consecutive days, and most of them were quick, local, after work rides. More directly impacting the joy of the trip, was the fact that Miniskibum has grown into a perfect riding partner. While only 13, he’s physically strong enough to keep up with his aerobically challenged old man. Technically, he can ride anything I can, often more smoothly and efficiently. Most importantly, he has the perfect attitude, always eager to ride, willing to try anything, and not too timid to shame me when I’m slacking.  Huge thanks to my wife for genuinely allowing us this indulgence, guilt-free.  I can’t imagine living a more blessed life!

Man, I can only dream about a trip like that! What a blast it was to read!
Thanks!

Man, you guys truly had a fantastic trip! So cool that you were able to enjoy it with your son, too. I hope that one day I can do the same!

As for the comment on miles, while thanks for the nod (even though that was a little hyperbolic, haha!), I’ve found that if you want to cover this much territory and ride back-to-back days on different trails with no rest days you really have to pace yourself like you guys did. With no rest days built in, the effort tends to accumulate in the legs. Personally, if I do a really long effort on the weekend, I’m pretty much down and recovering for the next 3-4 days (if not more, depending on the effort). So I’d say that riding 10 days straight for an average of 18 miles per day is a pretty serious accomplishment! 😀

It’s been a while since I’ve hit the road with my MTB. Can’t wait to get back out there and get exploring!

What an awesome trip! Sounds like you had a blast and got to do quite a bit of fun riding. Can’t wait to check out some of the places you mentioned 🙂

Wow…what a trip to remember. So many good bits…

I thoroughly enjoyed this series–thanks for sharing!

love dem Saguaros, thanks for a great series. Arizona is such a fantastic state, that has some amazing singletrack. My dream life would be; work from home, Live in Tucson in the winter, and Crested Butte in the summer! 🙂

My wife and I are hatching just such a plan. Provided we can save enough in our remaining working years, retirement will be winters in Tucson and summers someplace in the rockies, leaning toward Montana.