We thoroughly enjoyed our time in Bend, Oregon and were loathe to leave… but everyone in Bend raved about how fantastic the riding was in Oakridge. Apparently we were on the right track, as we already had campground reservations for Black Canyon, just outside of Oakridge!

After rolling into town, we wasted no time: we dropped by Wilamette Mountain Mercantile, purchased a map, got some trail recommendations, set up camp, and prepared to ride!

While this was our first visit to Oakridge, after reading reviews on Singletracks there was one trail that I knew I had to ride first: the Alpine Trail.

There are numerous options for extending this ride, or even shortening it, but I decided to do one of the classic shuttle routes beginning at roughly the highest point in the mountains, and then following the named Alpine Trail all the way back down to the river. Thankfully, while Summer had injured her arm just a few days before, she was still game to drive me up the mountain. 🙂

Even the drive up the gravel road was gorgeous! As we climbed high up the mountainside on a winding gravel road, I realized just how different these mountains were from those surrounding Bend.

In Bend, the big, majestic peaks are all massive volcanic cones. They tend to sit by themselves, isolated against the skyline. Of course, they’re surrounding by other “mountains,” which are really just rolling hills in comparison. While the rolling hills surrounding the big peaks (such as Mount Bachelor) might count as mountains in, say, Georgia, they’re even mellow by Georgia standards.

In Oakridge, gone were the solo volcanic peaks–they were replaced by massive mountain ranges and majestic ridges, rising high above the rivers and lakes below. In fact, the forested mountain tops and the humungous trees reminded me of trails I had ridden while living in the northwestern corner of Montana, near Kalispell and Whitefish.

Finally, after about 45 minutes of winding up the sinuous dirt roads, we found the top of the trail where I planned to drop in. Giddy with excitement, I unloaded my rig, threw on my pack, and got rolling!

While the Alpine trail is definitely great as a shuttle (though rideable as a massive loop with other trails or gravel roads), there’s still a respectable bit of climbing. Right after the shuttle drop, there’s still a thousand feet of net elevation gain before reaching the high point of the route four miles later. After that, it’s mostly downhill, but is still punctuated with a series of short uphills.

It’s hard to imagine an ecosystem that’s this drastically different from the one in Bend a mere 60 miles away as the crow flies. Of course, I’ve already written about how radically different the McKenzie River Trail was, but after spending even more time in Bend the difference here in Oakridge was incredible!

Gone was the dry landscape, scrubby trees, and scraggly pines. In its place were the massive trees and the vaulted canopy of the Willamette National Forest. Here are a few photos in a futile attempt to help you understand just how massive these trees are… but you know the pictures don’t do them justice: 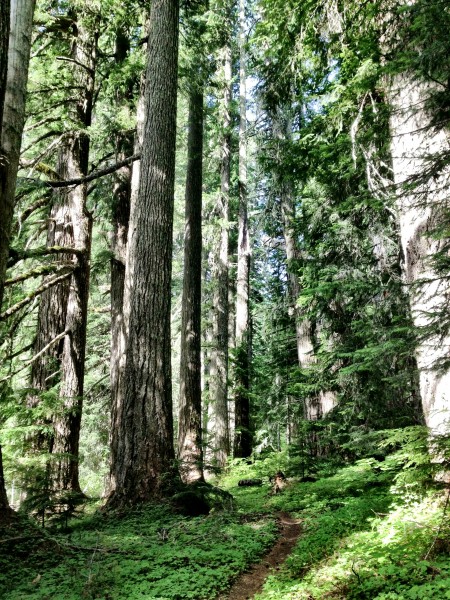 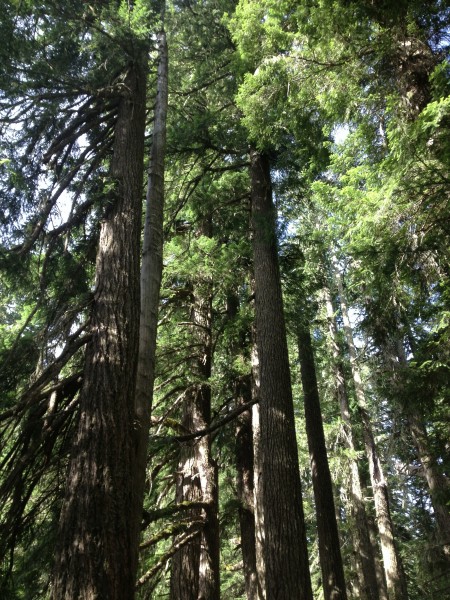 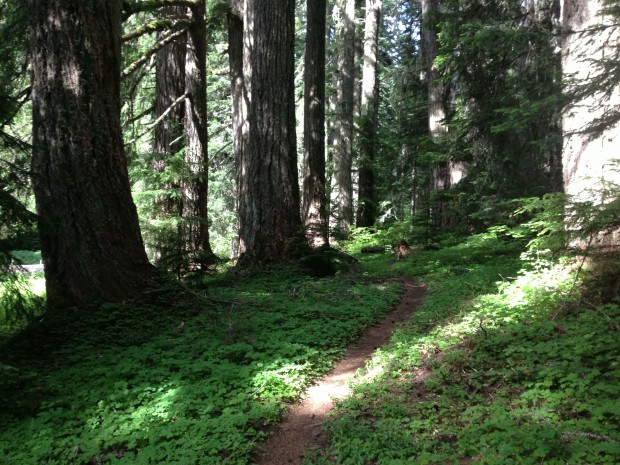 Hailing (or at least, having hailed) from North Georgia, I’m no stranger to riding in deep forests (although these trees still blow the North Georgia forests out of the water). However, something we don’t have in North Georgia is epic scenery… and despite the massive trees, the Alpine Trail still opens up into high-alpine meadows and offers fantastic views of the surrounding mountains! 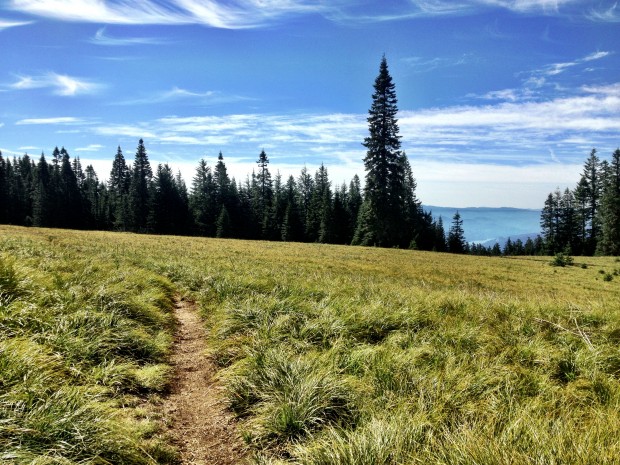 After getting the climb out of the way and easing into the descent, the trail eventually steepens, swooping through the trees with rip-roaring fun!

This is the dirt that dreams are made of: tacky, with traction for days, beautiful to look at, and delightfully silent when the knobbies dig in. As I slalomed down the mountain, blasting through rock gardens and airing off rollers and drops, the loam was always there to provide incredible cornering traction (also thanks in part to some mini berms tucked away beneath the trees). The dirt also offered plenty of stopping power when I needed it.

I definitely laid on the brakes as I rolled up to this breathtaking vista, pausing for a few minutes to shoot photos of Oregon’s splendor: 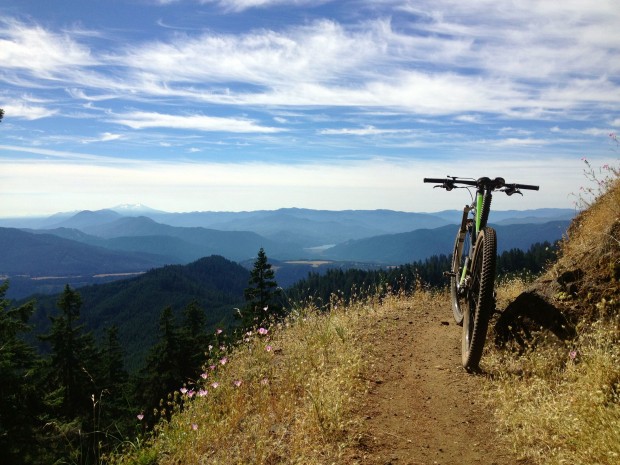 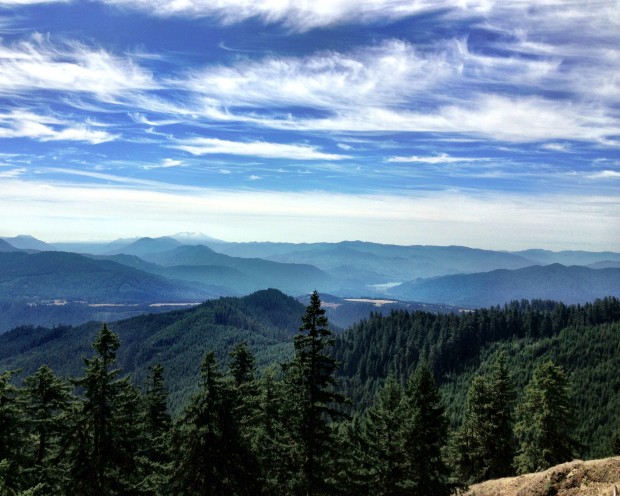 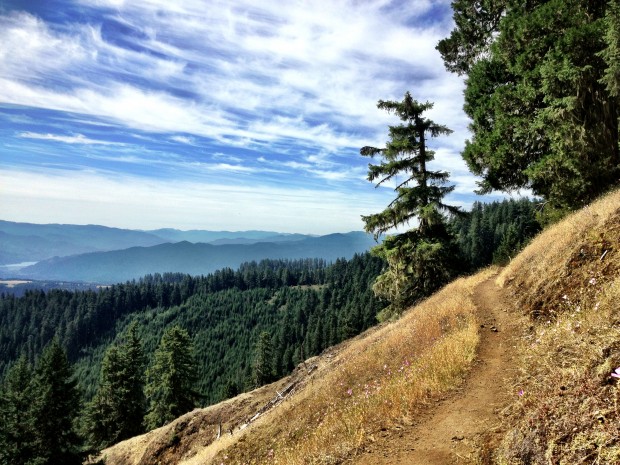 After this point, the trail sidehilled the steeper lower mountain side, descending lower and lower to the valley floor. Eventually, I glimpsed the small town of Westfir below me: 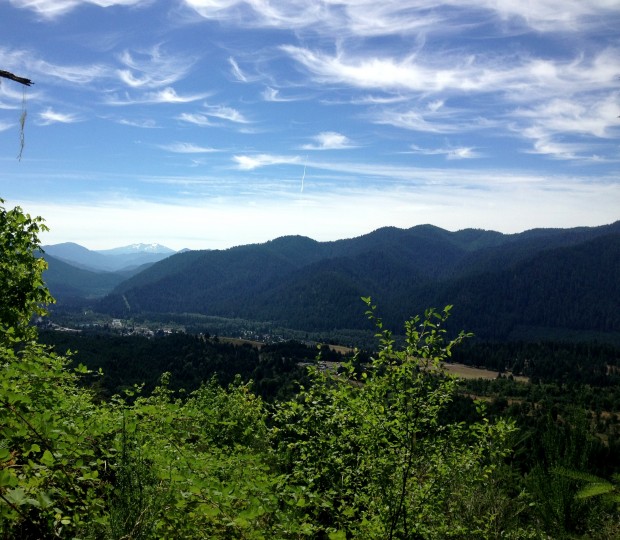 Alas, all good things come to an end, and so did the Alpine Trail. However, it spat me out into a park near a covered bridge, with a bike wash and an overgrown (but rideable) pumptrack: 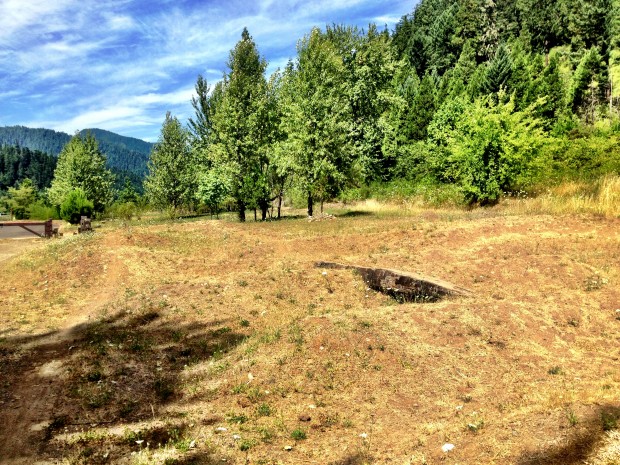 What a great way to end the day!

Stay tuned to the Singletracks Twitter for more tales from Oakridge and beyond!

Nice. Sounds like a place to visit soon. Only about 4 hours from my place here in Washington.

Rode Alpine this summer. Laughed as I studied your photos; I took pictures at a couple of the same spots.