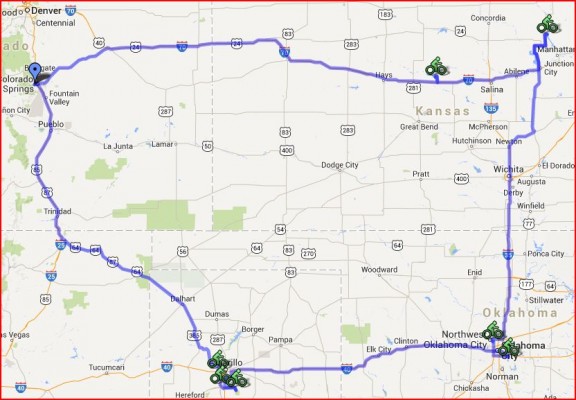 With Texas and Oklahoma having both exceeded expectations, we had one last chance to waste time riding uninteresting, unchallenging, flat, non-scenic trails.  I’ve driven through Kansas many times and noted that it’s got about as much vertical relief as the surface of my kitchen table, so certainly this was going to be the Holy Grail of non-mountain bike-worthy locations.  We used to joke that it doesn’t really take six hours to drive across Kansas, but that they simply put your car on a treadmill when you hit the border and let you off six hours later!

Of course, Texas and Oklahoma had both fooled me already, and I knew Kansas was home to the IMBA epic Switchgrass trail (on our itinerary), so there was certainly no guarantee of confirming our preconceived notions.

On day two, we had spent more time than originally planned in Oklahoma, so we didn’t reach Wichita until well after dark in the post-daylight savings time world.  Although we had lights, we weren’t keen on parking in an unfamiliar area and doing our first ride on a new trail after dark, especially after four hours in the car preceded by over 20 miles on the trails around Oklahoma City.  So we simply hit the hotel and recuperated for the next day’s riding.

While I knew Switchgrass was a highly-touted trail with plenty of techy bits, I had seen more than one source claim that Fancy Creek was the state’s most technical trail.  That’s all it took for me to make that a mandatory stop, even though it was over an hour and a half out of our way.  Even so, I expected that calling a trail the most technical in Kansas might be like saying Vanda Station is the warmest spot in Antartica. 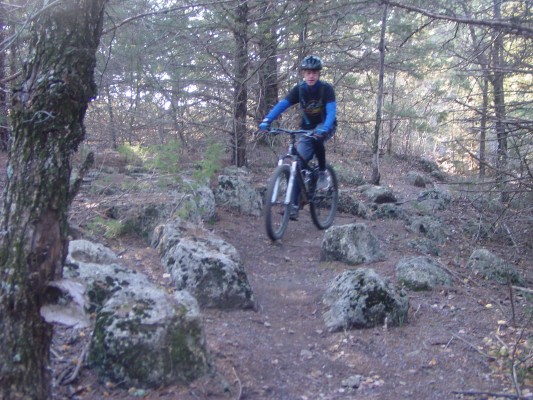 Fancy Creek State Park lies in the northern reaches of the Flint Hills, a unique ecoregion that melds a variety of grasslands, woodlands and wetlands.  As you drive north out from Manhattan (Manhattan, KS, that is, home of the Jayhawks, not to be confused with its slightly-more-famous namesake in NY), you can actually notice the general uplift in the topography and, upon entering the park, you climb more steeply to the somewhat hidden trailhead which lies at what appears to be the high point in the park… if not all of eastern Kansas. 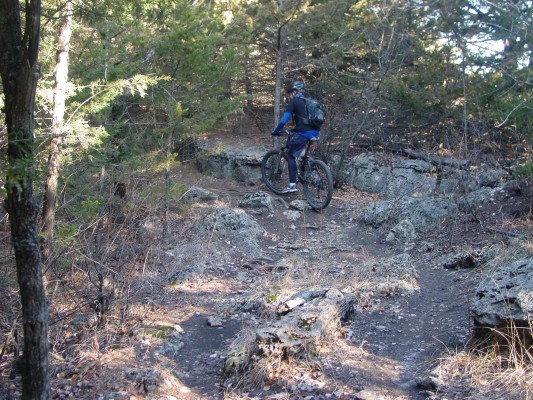 The trail is meant to be ridden counterclockwise, which we immediately screwed up by taking the wrong branch out of the parking lot. This turned out to be no matter as it appears the trail rides equally well in either direction, and we saw a grand total of two hikers and zero bikers over the 4.5-mile route.  The ride did, however, hit us with two immediate and startling surprises.  First, the trail proceeded through very dense forest that had a high proportion of evergreens–that’s right, a dense pine forest smack in the middle of the Kansas prairie.  Second, the trail almost immediately threw some challenging rocks at us with sizeable step ups and periodic rock gardens.  After a sharp descent, we hit the park road crossing which is when I realized we were proceeding in the “wrong” direction.  Not wanting to re-climb the rock strewn descent we had just come down, we decided to complete the loop the way we were going. 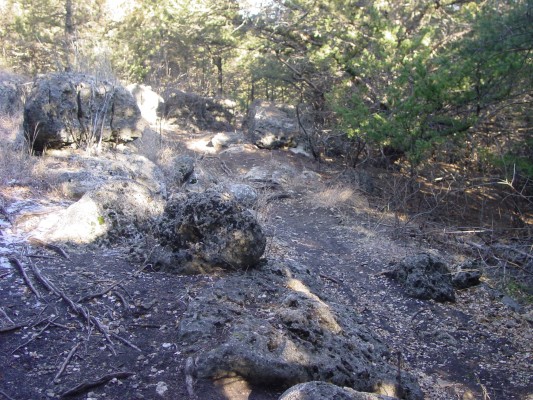 As we descended further, I wondered how much climbing we’d have to do to get back to the start (I’m not a big fan of rides that start at the top—I’d rather do the work first and finish with the reward).  The trail began undulating through the beautiful mixed conifer and deciduous forest, frequently punctuated with sharp climbs, roots, and the ubiquitous Flint Hills rocks, which lay strewn about the trail at the sharpest and seemingly most inconvenient angles.  There was certainly nothing deadly here, but there were near-trials-like challenges around almost every corner.

Adding to the “sport” of the ride were the remnants of some recent snow, ice in hidden nooks and crannies, and even the more exposed rocks were covered with a thick layer of frost left over from this very chilly night.  These unpredictably slippery surfaces really gave me pause at times, but Miniskibum fearlessly charged every one.  Apparently the laws of physics with regard to the coefficient of sliding friction don’t apply to 14-year-olds.

Amazingly, pleasantly, and to my surprise, the climb back to the car didn’t seem nearly as tough as it should have been given all the altitude we had surrendered along the route.  Many of those undulations helped us work our way back up without us even realizing it, making the final climb of little stress.  Upon returning to the car, I could see how this could be the most technical trail in Kansas – as well as at least a dozen other states.  It was a sometimes awkward–but always entertaining–challenge.

Adding to its appeal to me was its lack of mountain bike-specific design.   While it is a mountain bike trail, it eschews the berms and other features designed to appeal to cyclists and leaves them to deal with the lay of the land in its natural state.  I recommend any rider who likes lots of techy bits on their rides make the detour off I-70 to reach this one.

Despite being smack in the middle of Kansas as well as the big empty that is the great plains, Switchgrass at Wilson Lake State Park has rightfully received a good deal of cycling press in the last few years, and we were excited to ride it.  There are 29 miles of high-quality, frequently-challenging serpentine blanketing the hills on the south side of the reservoir.  The number of rock outcrops peeking through the prairie grass was truly surprising, as was the way the trail seemed to incorporate every one.  It’s as if the trail designer started with an aerial photo of the area, marked each of the outcrops, and drew a squiggle that would connect them all.  The good news is that this gave us plenty of techy fun on the ride, far more than we would have imagined even after riding Fancy Creek.  The bad news (for me) was that this gave the route a somewhat “artificial” feel.  Even so, this is a stellar ride, and, being even closer to the interstate, should be worth the stop of anyone passing through the area with a bike on hand.

Adding to the surprise was that this superb bit of trail was entirely uninhabited.  Here it was, the Sunday of Thanksgiving weekend, sunny and calm (calm being unusual for the prairie), and we saw but one other cyclist, and that was in the parking lot.  It actually felt quite lonely, pedaling out there on the prairie hills with nary another soul in sight.  While Fancy Creek was also unpopulated, the woods seemed to keep us company while here, with undisturbed line of sight for miles in every direction, the terrain and topography reminded us of just how out in the middle of nowhere we really were.

So, at the end of our three-day, three-state attempt to waste time riding boring trails, we flat struck out.  Texas-strike one; Oklahoma-strike two; Kansas-strike three (and that last one was a big whiff)!  I guess that goes to show that you can find excellent riding wherever you are.  Isn’t this a great sport!?!

Sounds like a great trip with your son! One correction Willie the Wild Cat is in Manhatton KS.