The final stop on our almost two-month western mountain biking tour was Flagstaff, Arizona. On the way from Big Bear, California to Flagstaff, we made sure to detour up to Grand Canyon National Park, as neither my wife nor I had been there before. 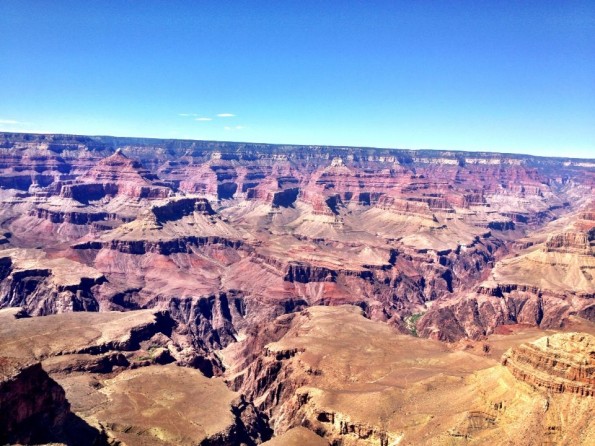 While there is no singletrack riding in the park, I highly recommend this as an off-day if you’re mountain biking in the Flagstaff area. The grandeur of the Canyon is truly awe inspiring… no photo can do it justice!

One of the things that I love about living and riding in places with massive mountains is how it impresses upon me my smallness in the universe. When I look up at the rocky peaks towering thousands of feet above me or sit on the summit looking down after having spent hours climbing to the top, I realize just how insignificant I am in the grand scheme of things–and that keeps me humble.

The Grand Canyon is one of those places that makes me feel small, but in a way that is directly opposite from the tall mountain peaks. As you approach the park from miles away the ground is pancake flat but when you reach the rim, suddenly there is this massive rift in the earth that is so deep you can’t see the bottom of it and so long you can’t see the ends of it. Truly marvelous!

Since Fort Valley is shared with motos, it features some of the standard negative effects you’d expect, such as accelerated erosion and the occasional singletrack braiding… but it features some of the benefits of moto traffic too, such as tons of banked turns and plenty of rocks to shred! My entire experience riding here was just awesome–the rocks were fun and the dirt was tacky and my bike drifted predictably when things got loose. The climbs were all very gradual and the descents, while not steep, were wide-open and fast! It was so much fun… I highly recommend it!

According to a local bike mechanic at Absolute Bikes, the trail conditions were currently horrible by Flagstaff standards: “totally blown out” due to a serious lack of rain. If these trails were in horrible condition, I’d love to ride them in their prime! Compared to the crazy-dry, loose SoCal trails I had just spent over a month riding, the dirt here in Arizona was firm and very grippy.

Much of my climbing took place on the Schultz Creek Trail. Schultz Creek seems to be a pretty popular access point to the area’s trails, and it’s easy to see why. The singletrack climbs up along a creek drainage and is mostly smooth with a few rocks thrown in. Despite being pretty chunky in places, the technical sections are very rideable thanks to the moderate grade.

I popped out onto a gravel road part way up Schultz Creek and wanted to hang a left back toward Fort Valley. After consulting the Open Cycle maps via my Runtastic Mountain Bike Pro app, I ended up connecting to the Arizona Trail. The AZT, as it is called, is a long-distance trail running over 800 miles from Mexico to Utah… and almost all of it is open to mountain bikes!

As soon as my knobbies started rolling on the AZT’s divine surface, I thought I had died and gone to cross-country singletrack heaven. As cliche as that sounds, the AZT singletrack was some of the narrowest, best-designed, tackiest, flowiest dirt I had put tire to since I left Georgia seven weeks earlier. It was simply stunning! Sure, it wasn’t the most technical trail I had ridden during my trip nor the steepest or fastest, but the all-around perfection was something to behold. Perhaps my judgement was clouded by the less-than-stellar singletrack I had ridden in SoCal, but I had ridden some amazing trails in Big Bear too.

I ended up riding about 10 miles of the AZT, but it wasn’t nearly enough! I can’t wait to return, load up a full backpack of gear, and just start riding and see where the trail takes me.

One of the many things that make this ride so magical is the unique ecosystem these trails are located in: the largest ponderosa pine forest on the continent.

The ponderosas are tall, stately trees that are straight as telephone poles. Riding below them is a surreal experience as the large trees are spaced pretty far apart and there is little to no undergrowth, aside from the grasses you can see pictured above.

These trees have adapated to live in an ecosystem that is swept by low-intensity fires every 2-12 years. However, in the early 1900s, the USFS introduced a policy of fire suppression, which led to a build-up of undergrowth and debris beneath the pine trees. Then, when a fire would break out, it would no-longer be a low-level blaze, but would instead build to a fire of catastrophic proportions, wiping out complete stands of these trees.

In recent years, the Forest Service has reintroduced these low-level burns, which is absolutely necessary for the health of the ponderosa pine forests. The result can be seen in the pictures above: a tall pine canopy of widely-spaced trees and little to no undergrowth, creating a land that feels enchanted as you ride through it.

So Much More to Offer 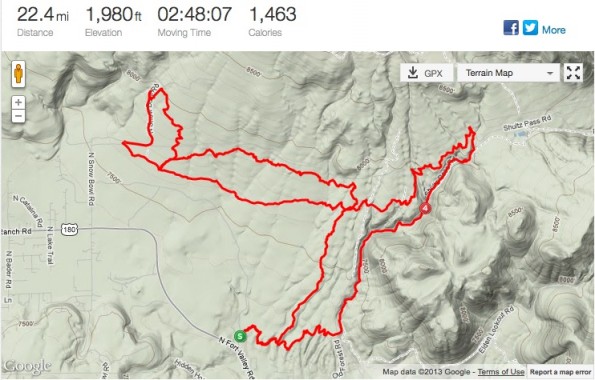 By the time I wrapped up my ride I had ridden 22.4 miles… but only climbed 1,980 feet, according to Strava. Later that day we swung by Absolute Bikes in town and chatted with one of the mechanics, and in passing I asked how many miles of trail they had in Flagstaff. “Right here around the town of Flagstaff?” he asked. “We have over 300 miles of trails here in Flagstaff, but there’s at least another 400 in Sedona (about 30 miles away).”

I realized that my 22 mile ride had only scratched the surface of what was available in Flagstaff! I also realized that I had only ridden some of the lower trails: the singletrack keeps climbing up the sides of the mountains that tower above town, the peaks of which soar to 12,637 feet (Humphrey’s Peak, the highest point in Arizona). For comparison, the high points on my ride were only a little over 8,000 feet.

Flagstaff is a bustling college town and there’s a great assortment of restaurants to choose from. We visited Altitudes Bar and Grill, a skiing-themed restaurant with excellent food and a good selection of craft beer. It was the perfect finish to a long day of driving and hiking at the Grand Canyon!

We barely scratched the surface of all the mountain biking and other outdoor pursuits that Flagstaff has to offer. Flagstaff has been on my to-do list for a long time, but I still cannot honestly say that I’ve checked it off: I most definitely plan to return!

Have you ever mountain biked in Flagstaff? What were your impressions?