Shredding powder in the midst of winter is fantastic, and so, of course, is riding high-alpine singletrack in the middle of the summer. But during the transition from season-to-season, there are a dreaded pair of time periods that defy definition, during which the weather could vacillate wildly from one extreme to the other. We call these times “the shoulder season.”

While part of my move to Salida, Colorado was motivated by a desire to escape the sheer drudgery of the shoulder seasons that I grew up with in central Wisconsin, and later experienced in Montana, sometimes, even during the shoulder seasons, you just need to get out of Dodge and go on a short vacation. This is where my wife and I found ourselves a couple of weeks ago. While the riding is still great right now in-town Salida, we just had to get a change of scenery–we just needed to go somewhere new. With heavy rains sweeping much of the nation, we delved deep into our Colorado knowledge to find a place that would provide the weather we wanted, some fall colors, and fun mountain bike trails to boot: we headed to the Western Slope. 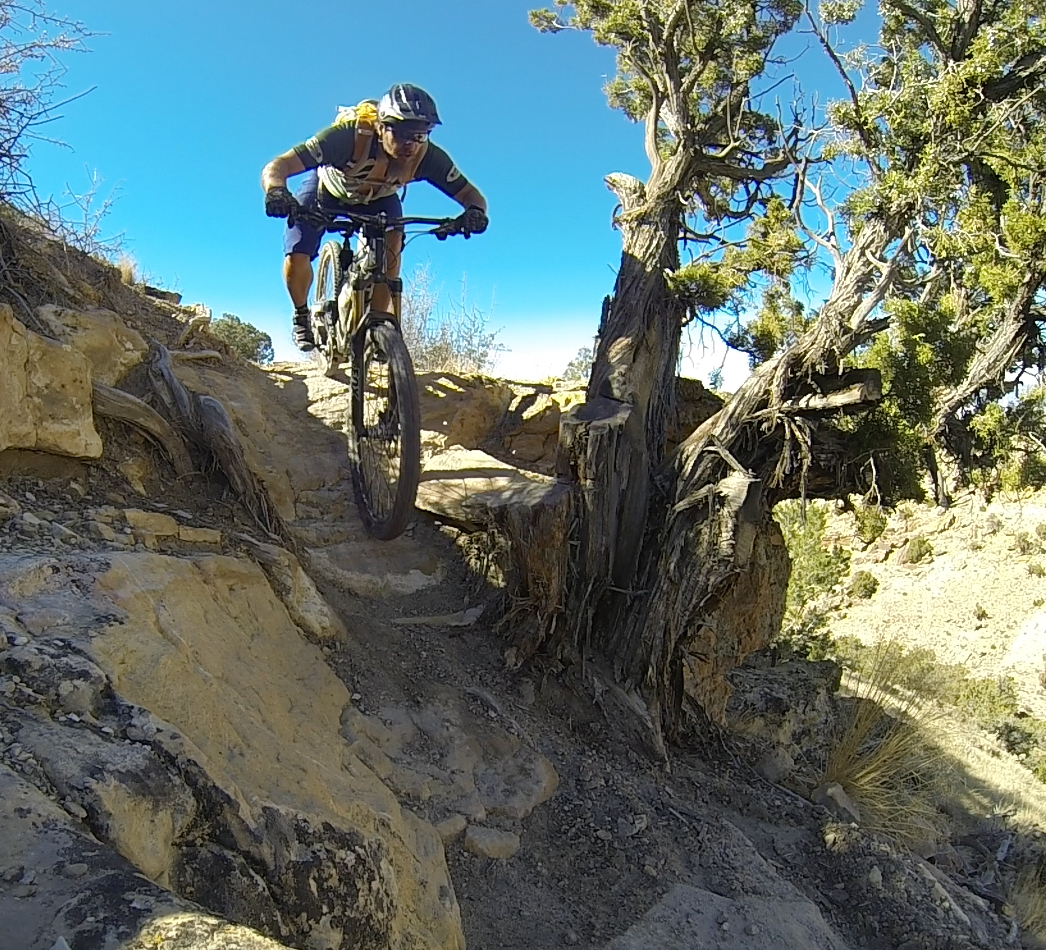 My wife and I stayed for five days in the small under-the-radar town of Paonia, Colorado. While we had the opportunity to do some great riding and hiking in that immediate area, I’d heard rumor of an epic point-to-point trail less than an hour from Paonia, located between Delta and Montrose. Known as the “Sidewinder Trail,” getting out that way to explore hadn’t been top priority for me—partially, maybe subconsciously, because of the name. The name “Sidewinder” is so overplayed, that you can find a trail named “Sidewinder” in almost every substantial trail system—we have at least a dozen Sidewinder trails, maybe more, listed on Singletracks–and there is something named “Sidewinder” in most industries. But I decided to overcome my general disgust for the name and give this trail a shot.

Despite having the trail listed in our database, we didn’t have a GPX file, so finding good map information was difficult. Based on the little that I was able to uncover, it sounded like the trail measured between 18-22 miles from one end to the other. Reportedly traversing very dry, deserty, technical terrain, with steep climbs and descents, I was a little skeptical: how challenging would this trail be? How fast could I cover the distance? In such a dry, hot environment, would I have enough water to make it?

I sweet-talked my lovely wife into providing me with a shuttle, allowing me to attempt the full trail end-to-end. I had heard that if ridden as a point-to-point, one should start on the southernmost end and head north, and that you’d be treated to an extra 1,000 feet of descending, despite still climbing at least 2,000 feet. This turned out to be a great piece of advice.

I began my ride in the south by pedaling up an ATV trail into the hills, in search of the Sidewinder trailhead. While the GPS trace I had found showed the trail nearby, there was little in the way of additional information found on the surrounding topo map—unlike the topos here on Singletracks. I pedaled and pedaled up the hillside, hoping that I’d reach the trail soon. 1.3 miles later, I was finally at the trailhead and ready to ride some singletrack.

Sidewinder quickly taught me that my passage across these dry, rocky mountain sides wouldn’t be easy. I was immediately greeted by a steep climb, infested with rocks, boulders, and even more rocks. Indeed, while there were a few fast, flowy, sidehill sections of trail, Sidewinder is an extremely technical route. Square, blocky rocks form obstacles both uphill and down, along with slickrock sections, ledges, rock gardens, rock rolls… basically every kind of rock obstacle that you can imagine, Sidewinder has it.

For a taste of the rockiness, check out this quick clip:

While Sidewinder is a longish-distance point-to-point trail that more-or-less runs across the side of the hill, the reality is that it’s never really quite like you’d expect a point-to-point sidehill trail to ride like. There’s almost no easy cruising on this trail, meaning that ultra-endurance freaks with no bike handling skills need not apply. Bring all of your suspension, and still be prepared to walk at least a couple of obstacles. 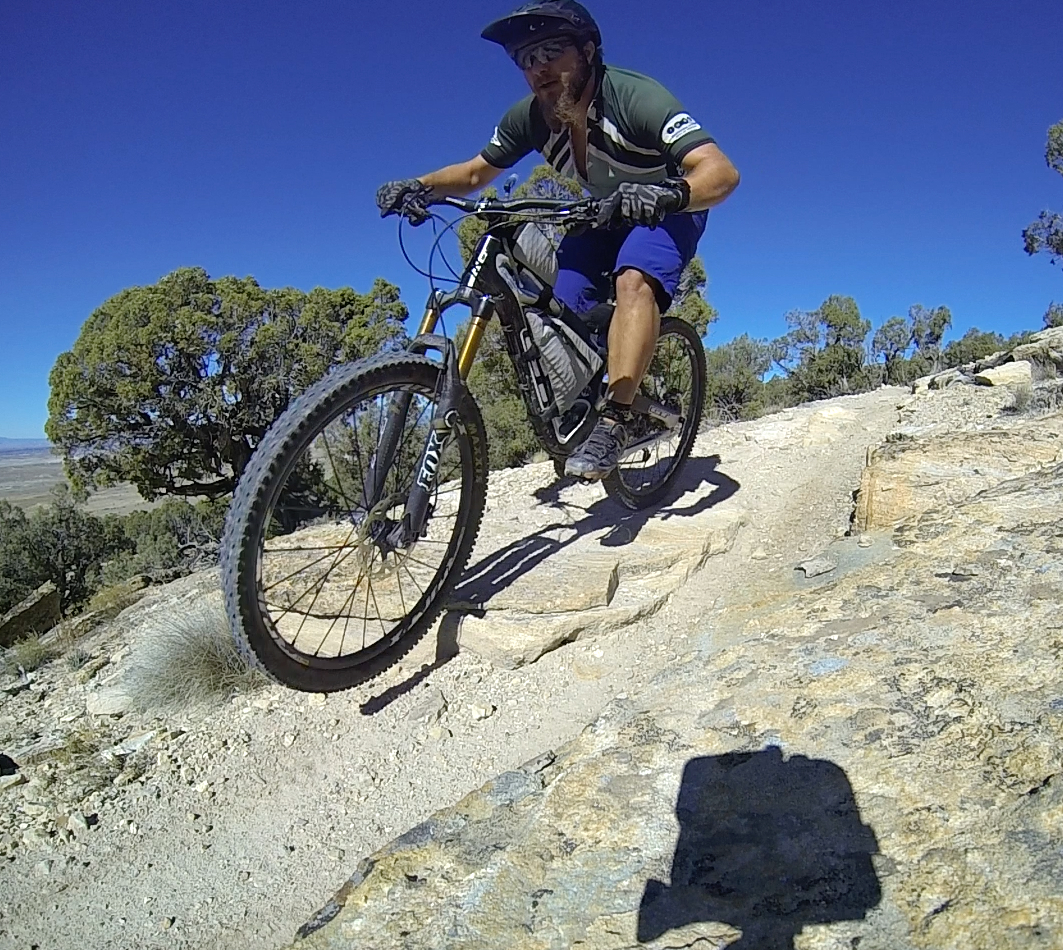 Thanks to how hard the mileage was to conquer, I quickly realized that I was making much worse time than I had hoped. As the hours dragged on, I realized that despite the quite cool temps in the mid-60s, I would soon be hitting the bottom of my water supply. While towards the beginning of the ride I sucked thirstily on the hydration hose, as the middle of the route wore on, I started sipping conservatively, toeing the line between premature dehydration due to not drinking enough water, and eventual dehydration due to running out of water too soon.

Also, while Sidewinder more-or-less winds around the side of the hills, it routinely dropped into a slickrock-lined gully, descending straight down the fall line of the mountains for a half mile or so. Unfortunately, the trail was never satisfied with staying at that final elevation, but it inevitably climbs back up the next ridge to the same elevation that it started at, only to drop into yet another gully in a mile or so—again and again and again. 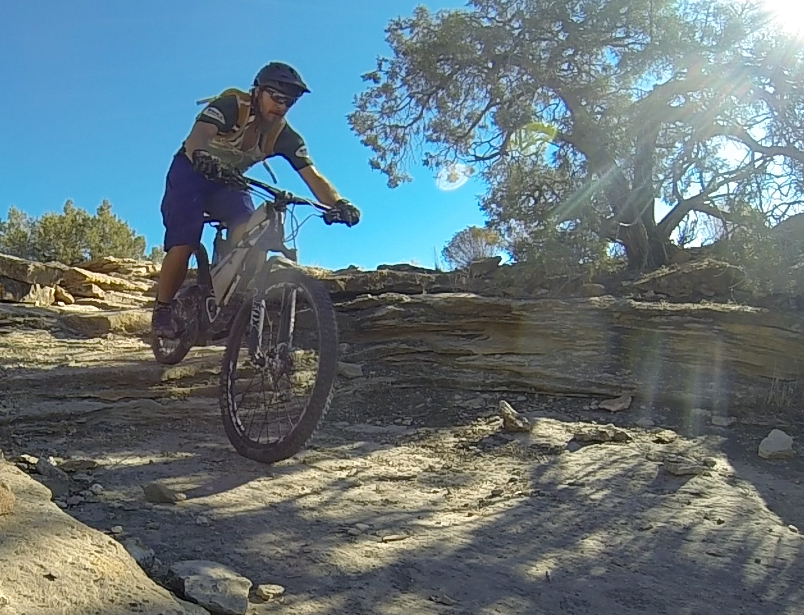 Thankfully, after one nasty, lengthy climb out of one of the biggest ravines yet, I coasted down the hill and saw my first sign of civilization since beginning the route: a trailhead where a solitary van was parked. I had cut it close on my hydration reserves, with one bottle empty and my reservoir almost there, but I’d eeked out 20.6 miles in the desert and 3:43 of time (3:14 moving time) on the water and food I had carried with me. Mission accomplished!

All told, I climbed 2,398 feet and descended about 2,900 feet, but in addition, the final descent to the trailhead in the south to north direction was all on sweet singletrack. If I had ridden the other way, in addition to climbing more than I’d descend, I would have dropped the final 500+ vertical feet on boring ATV trail.

If you’re looking for a Colorado getaway during the shoulder season and decide to ride this trail as a point-to-point or as a loop with the nearby Peach Valley Road (only true hammerheads need apply), be sure to cover the singletrack distance south to north. If you can handle the rocks and the distance from civilization, Sidewinder will reward you with an epic experience worthy of a grander name!

Good article, Greg! Agree with “bring your suspension” – this is a constantly technical trail. I have ridden North to South both times, but I prefer technical climbs to technical descents, and it seemed liked mostly climb heading that direction. Only minor complaint is that it never really gets a flow going southward…every time you build up speed you round a corner and hit another rock garden. Rode the Peach Valley loop last time – meh on the dirt road section. Would recommend just ride point to point as out and back, or drop a vehicle at one end or the other.