After getting snowed out at the beginning of the month and subsequently postponing and moving our ride, Saturday, April 12th rolled around, and we were finally able to meet up for our Singletracks Colorado group ride at South Shore Lake Pueblo!

The morning dawned with a bright, hot sun, leading to an eventual high of 78 degrees. While it’s still full-blown winter in the high mountains, and while the entire Front Range was to receive a thick blanket of snow the next day, on Saturday it was hot and summer-y in Pueblo!

We began the ride with a dozen folks, and despite my supposed career in journalism, I failed to get a group shot. But honestly, it was time to hit the trail and shred… moar riding!

It was such great fun to be able to put a real-life face with an online screen name, especially after having gone back-and-forth on the forums with some of you guys for years!

On our way back to the vehicles, after finishing up a big XC loop, we did a couple of runs through the canyons, and stopped for some quick photos on Freeride:

After a fantastic 20-something-mile ride, we headed into town and refueled on some absolutely delicious burgers and beer at Bingo burger. I’ve officially found my favorite Pueblo restaurant!

However, my day wasn’t over yet: I’d heard that there were trails located on the north side of Lake Pueblo as well, and since we didn’t have them listed in the Singletracks database yet, I figured that it was my duty to saddle up for some singletrack exploring.

While the trails on the north side aren’t nearly as well-ridden, as interesting, or as expansive as those on the south side, they’re still worth checking out if you’ve ridden all of the other singletrack in Pueblo. 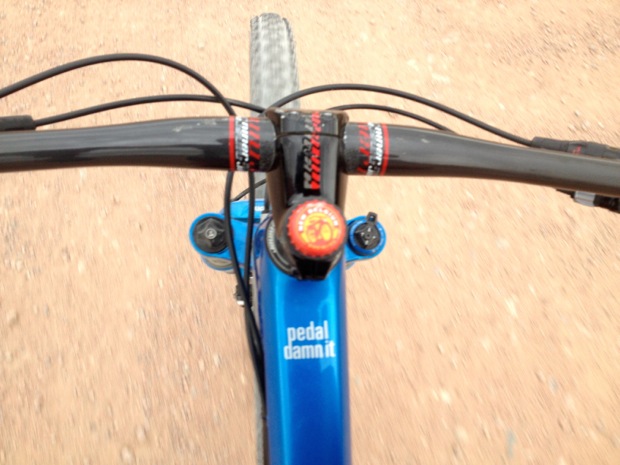 While there were still a few sections of trail that I didn’t get to explore, with the weather system moving in on top of me I decided to call it quits after 10 miles.

All in all, what a fantastic trip down to Pueblo to ride some singletrack! Thanks for the fun times, everyone!

Looks like you guys had a great time! Good to know there’s some fun riding down that way. One of these days we’ll get over there to check it out.

Someday I hope to get out that way for a ride. The north east, where I am, is a great place to ride but after a while you get tired of dodging trees, riding through mud and startling deer.
After looking at your pictures I had to go back to top of the page to see if you where on Mars or the Moon.

Instead of dodging trees at Pueblo, you’ll be doging cacti. We’ve got just as many deer, but they don’t startle–they’re pretty used to bikers cruising through.

I hand a blast meeting and riding with all that attended. This was my first group ride too and am looking forward to more!

Glad you enjoyed the ride! Sometimes, getting together really adds to the experience.

It was great to meet you too, Vitaly! We definitely need to ride again!