Most mountain biking destinations have a marquee ride, that one “must ride” everyone will hit when they visit (think Slickrock in Moab or Trail 401 in Crested Butte).  But in each case there is always a “B” ride, a trail or route that’s just as rewarding despite a lack of big name recognition.

The Marquee Ride:  The Downieville Downhill

The “Other” Ride:  The Big Boulder Trail

If you look at the early choices for IMBA Epic Rides, you will see some that have entered the top tier of mountain biking lore (think Buffalo Creek, Levis Mounds, Tsali) and are either on your biking resume or your bucket list.  There are also a number of trails that, despite getting the IMBA push, have fallen from the must ride category.  The Big Boulder Trail is one of the latter, and it’s somewhat understandable as this is a partial deviation from the classic Downieville Downhill route.

However, this is a fantastic route and no less worthy than any other!  The good news is you need not choose, even if it’s your first and only day in Downieville.   By taking advantage of a shuttle service, you can hit both the classic and this alternate route, racking up over 9K verts of delicious descent in a single day! 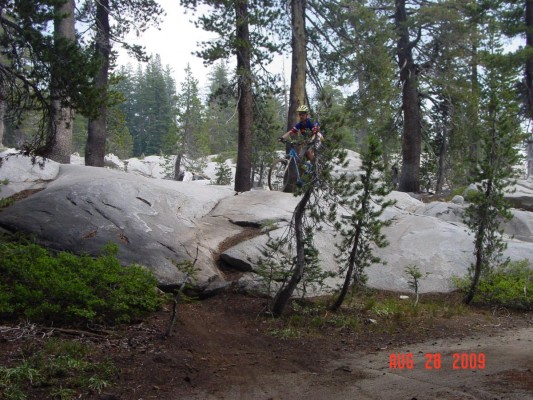 The “Other” Ride:  The Hole in the Ground Trail

One does not go to Tahoe without getting an eyeful of the Lake, and there’s no better place to check out Lake Tahoe than from the Flume Trail, just on the Nevada side of the border.  However, as gorgeous as the scenery may be, what’s under your knobbies isn’t always that interesting.

For a full-fledged fat tire fiesta, head over to the Hole in the Ground Trail.   You’ll get a little pavement, a little doubletrack, and a whole lot of wicked good singletrack. It all starts with a long and stiff but entertaining and doable climb, followed by some fantastic ridge top riding complete with epic high Sierra views (sans lake). There are also ultra-fun rock stunts, deep woods cruising, and an absolute hoot of a bomber descent at the end.  Who could ask for anything more?

The “Other” Ride:  Little Creek Mountain

I have frequently raved about Gooseberry as my favorite fat tire playground and I still call it #1 of the 357 (at last count) trails I’ve ridden.  But nearby Little Creek Mountain is easily a Top 5 as well.  There are those who actually prefer Little Creek Mountain and it’s not hard to see why as it has no shortage of its own virtues.  These two trails would actually make the perfect subject for one of those “compare and contrast” essays you used to get in English class.

Both trails are desert and rock routes that sit atop broad, flat-topped mesas.  Both will take you right to the edge of the mesa, making for tense moments for those with a fear of heights.  From a distance, both mesas look relatively featureless on their tops, but once on top, you’ll find both have plenty of features of the most entertaining variety.

Yet there is great contrast in those features.  While Gooseberry is mostly rock, Little Creek intersperses rock with a largely singletrack route.  While the rocks on Gooseberry are mostly rounded and roller coaster like, requiring quick, decisive weight shifts, the rocks on Little Creek are more ledgy.  Gooseberry has great rollers, but Little Creek has better hucking opportunities.  Both are awesome–they are similar yet unique. Most importantly, any trip to Southwest Utah without hitting both would be a travesty.

The “Other” Ride:  The Lunch Loops

The 18 Road Trails were Fruita’s original destination ride.  Along with the Kokopelli Loops, they remain the primary destination for most Fuita tourists.  However, the Lunch Loops, which actually sit on the edge of Grand Junction, are rising in popularity and are a must stop if you are a tech monkey.  Even though they’re in Grand Junction, you can get to these trails quicker from Fruita than you can the 18 Road Trails.  Moreover, if you’re staying in Grand Junction, you may be able to ride directly to the trailhead without even getting in your car.

What makes these trails so enticing is the constancy and consistency of technical challenge in contrast to the mostly buffed out options at 18 Road.  The Ribbon is more Moab-like than anything, but still unique on the planet and a definite bucket list entry for adventurous riders.  Down in the Lunch Loops proper, you’ll find awesome climbs and trails that sometimes feel more like trials courses than cross-country routes, though with excellent flow throughout.  Fruita is fun, but Grand Junction will give you the greatest sense of satisfaction.

The “Other” Ride:  Kenosha Pass South

Kenosha pass is synonymous with classic Colorado epics.  Along with the Monarch Crest and the 401 Trail, this is one of the high alpine biggies in the Rocky Mountain State. But it’s also quite a commitment to ride and is usually quite crowded, especially on a weekend with good weather.  If you want to avoid the crowds or aren’t quite up to the full route, there’s a nice fallback option right across the highway  Starting from almost the same point, but going the opposite direction, the Kenosha South route serves up a less taxing out-and-back that still has those classic high alpine views and absolutely nobody to share them with.

Your turn: What’s your favorite “B” trail?

I love that Tahoe pic. Those rocks look absolutely strange, almost like dirty mounds of snow beween the trees.

“Go here instead if you want a lot of chunk in your Fruita loops” – LOL!

Ok, so my “B” trail recommendation is in the Chattanooga area. Everyone rides Raccoon Mountain (because it’s an excellent trail!) but the Five Points trail system just south of the TN border offers nearly the same thrills, just without the views or the satisfaction of a massive loop.

Those rocks were fascinating. Those odd formations were scattered along much of the route and often, you could pick a route around or over them, so something for everyone here. They were a large part of why I took such a liking to this trail.

+1 on Five Points. Jeff, we need to ride there again soon!

Good choice on Big Boulder. Very scenic ride, with lakes and meadows. Sometimes, you even get to dodge cattle wandering across the trail, complete with big horns and huge bells around their necks.

Great options described here! Youre right about many trails hasnt been recognized because of more visited “neighbours”. Many ride Lebanon Hills in Eagan, MN while not everybody even heard about Hillside Park.
Lunch Loop is a second most technical trail i rode after Black Jack (wasnt able to ride all features) and one of my favorite.

I’ll second the Hillside Park as a good “B” ride. Lebanon Hills was great, but Hillside Park was really good also and a lot less crowded!

That is a cool picture of those rocks!

I agree with the Lunch Loops…amazing ride and I have yet to clean all of the features on my bike…getting close!

My ‘B’ trail recommendation would be Balm Boyette Park near Brandon, FL. Alafia State park is listed as an IMBA epic, and is awesome, but Balm Boyette is right across the highway and equally as fun with big rollers and quite a few technical offshoots. Both are a blast, and you need to do both if you are in the area.

Another “B” ride to Fruita’s 18 Rd. and Kokopelli Trails is the Western Rim. Go here if there’s big crowds at 18 Rd, if you want even bigger scenery than the Kokopelli Loops, and if you want an epic that won’t leave you feeling destroyed at the end of the day.

My son and I just did a trip to Moab during his HS spring break, and stopped in Fruita on the way to do one of the “18 road” trails in the morning. After a lunch break we found “Lunch Loop” on our favorite site “singletracks.com” and decided to ride it. Well worth it. Many trails in this system and not crowded at all. Check it out if/when you hit Fruita or Grand Junction.

I always look for the trails less ridden, They’re usually “more interesting” . Bet I could find a way from the rest area on I-80 to Hole in the Ground trail. Think signs say no parking for trail access, but who would believe a truck driver was out mountain biking.

We actually parked at a bar/restaurant right off I-80 at the base of the pavement part of the loop–that way we could start with the pavement and finish with the singletrack. The bar was open, but it was off-season for them (late August–I think they’re more of a winter operation), so the huge parking lot was empty and they were cool with us parking there–and immediate access to an after-ride beverage was most welcome!

A couple of my other favorite “B” rides:

In North Carolina, while everyone raves about “Pisgah, Pisgah Pisgah,” myself included, nearby Dupont State Forest isn’t technically a part of Pisgah, but it’s nearby and is MORE than worth a visit! In a “Top 5 MTB trails in Western North Carolina” post I wrote a couple years ago, I think I listed Dupont as #1: http://www.singletracks.com/blog/mtb-trails/my-top-five-the-best-mountain-bike-trails-in-western-north-carolina/ Of course, if you took ALL of Pisgah together it would probably beat it out, but you owe it to yourself to ride Dupont!

The entire Kalispell area is basically an area of B-trails because it isn’t known as a MTB destination. Everyone else’s loss, the locals’ gain. That said, even there there are a few “B” trails to the main rides. While Reid Divide is one of the big, epic loops near Whitefish, ( http://www.singletracks.com/bike-trails/reid-divide-trail-800-to-trail-801.html#_=_ ) heading the other way on the divide drops down Bill Creek and, like the other side of Kenosha Pass, is shorter but is an absolute blast! Since that route is more like 10 miles, you can do laps, or it’s great for a short ride. The descent is also faster, steeper, and gnarlier than the more drawn-out Reid Divide descent: http://www.singletracks.com/bike-trails/bill-creek-trail-800.html

Nice article. I love finding good “B” trails. A good alternative to Slickrock in Moab is Amasa Back.