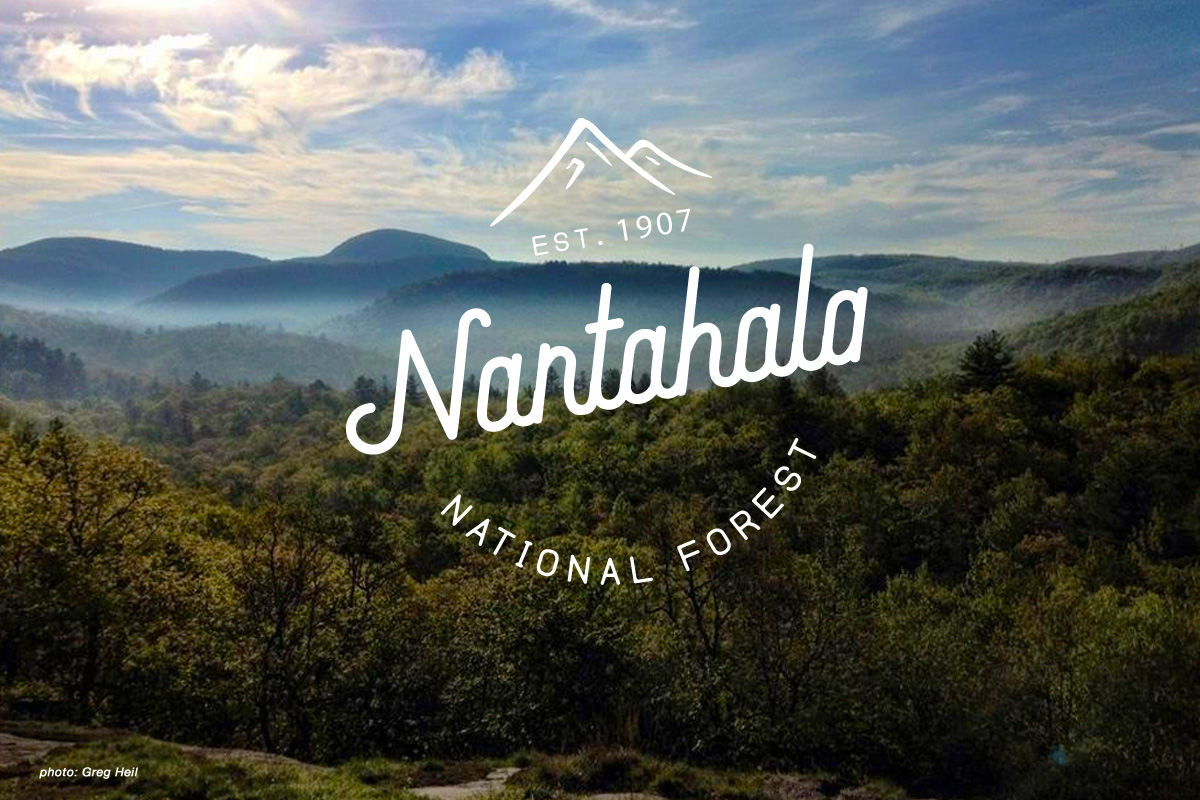 Mountain bikers across the planet make pilgrimages to western North Carolina to ride in the Pisgah National Forest, and it’s rightly deserved. But what if I told you that Pisgah has a bigger sister just to the west, that not only holds some fine riding, but also offers up white water adventures, phenomenal hiking, endless waterfalls, and more microbreweries than you would imagine?

Then welcome to the Nantahala National Forest, 830 square miles of temperate rain forest that stretches across the entire western edge of the state. It’s filled with 4,000 and 5,000 foot peaks and high ridges laced with singletrack, old logging roads, and pristine, bone-cold streams. The Cherokee people who’ve lived here for millennia called it the “Land of the Noonday Sun” because the ridges are so steep and the coves so deep. I simply call it Home. So fair warning: if you come to play out here in the Big Woods, you may decide to never go back, just like so many before you.

The riding in Nantahala is generally kinder than the insane goat paths of Pisgah, mostly green and blue trails, with the occasional black diamond mixed in. For that reason, Nantahala offers a much more accessible vacation for the family or a mix of diverse riders. The singletrack is fine and varied stuff, and ranges from smooth spinning through rhododendron tunnels at Tsali, to the rock gardens and steep runs above Fontana Village. The mountains here are also covered with hundreds of miles of old forest service roads, most of which are closed to vehicular traffic, but open for bike riders to explore. 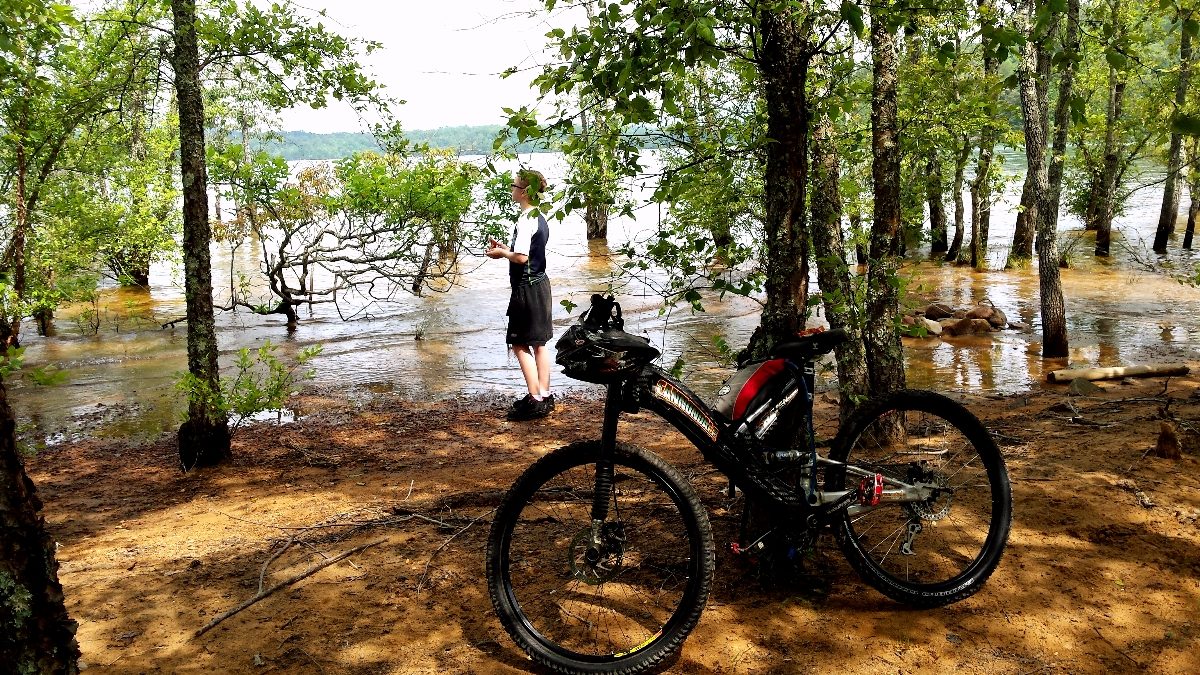 Jackrabbit was designed specifically with beginner to mid-level riders in mind, with 12 miles of sweet, tight singletrack dancing along the edge of Chatuge Lake, where few climbs are found. The trail was created with maximum fun in mind, with curves laid out perfectly for brake-free swooping, and tons of small dips and hops for getting air. This is the kind of place where you can bring your 5-year-old, your dad who hasn’t been on a bike in 40 years, or your hammerhead girlfriend, and all of them are going to have a blast. Need a place to spin and cool the legs after 3 days at Tsali? Go to Jackrabbit. Need a place where the kids can stop in the middle of the ride and go for a swim? Go to Jackrabbit. The nearby campground makes a weekend stay easy and affordable.

The trails at Hanging Dog were reportedly designed for beginner-level riders, but the only entrance, up the Ramsey Bend Connector trail, offers way more climbing than most newbies are going to be willing to tackle at first. That’s a shame, too, because many of the remaining trails remind me of Tsali in places, with smooth, swoopy runs, cool rhododendron tunnels, and views of the lake. Most of the trails roll along heavily-wooded ridges and down into deep coves, though there are a few transitions through old clear-cuts. There are very few technical challenges and the trails are generally smooth, though the leaf litter can get deep in the fall.

Similar to Jackrabbit, Hanging Dog runs along several small peninsulas jutting out into Lake Hiawassee. It also has about 10 – 12 miles of trails, and plenty of interconnected loops. But there, the similarities absolutely end! Whereas Jackrabbit hardly has any elevation change, the Dog is all about climbing. According to my topos, the trail never climbs more than 300 feet at a time, but that seemed like a cruel masquerade. There are several stretches where I found myself grinding along in the granny gear for a long time. By definition, any loop has to have as much descending as it does climbing, but many of the trails at Hanging Dog seem to defy that logic.

Be sure to download and print out a map of the trails before riding the Hanging Dog trails, as I couldn’t find a single map posted anywhere in the park. If your newbie companion already has some decent legs and cardio (like a roadie or a runner), then they’ll probably have a good time riding the Dog. But small kids, surly teenagers, or out of shape friends are going to be hating life within the first mile. I’d recommend going to Jackrabbit a few times first to build up some cardio strength, and then tackle the challenge of Hanging Dog.

So many people think that the riding in Nantahala National Forest stops at Tsali, or that there are no serious trails in western North Carolina outside of Pisgah. But those people obviously haven’t ventured another 30 minutes past Tsali to Fontana Village. Riders in the know often refer to Fontana as “Little Pisgah,” and for good reason. Most of the mountains in the Nantahala National Forest are a bit gentler than in Pisgah. But the slopes that border Fontana Village are seriously steep, covered in deep ferns and mossy boulders, with dicey creek crossings scattered throughout. It makes for some extraordinarily fine singletrack, and it’s been one of my favorite places to ride for over 20 years.

Fontana Village sits in a deep cove, with high ridges on all three sides laced with trails. There’s a good 20 miles of open trails here, and every bit of it is worth riding. The Fontana trails vary widely in terms of both elevation change and technical skill requirements. Some of the trails follow the course of old, narrow-gauge railroad lines that used to run through these woods, and are fairly wide and swoopy, like Whiting and Squatter.

Elmer Hollow, on the other hand, feels like one rock garden after another. You can find easy doubletrack on Upper Lewellyn Cove and entry-level singletrack along Hoor Hollow. You can make smoking, high-speed runs down Turkey Chute or Lower Lewellyn. Or you can really tempt fate, and drop the double-black diamond steeps of First Blood and Stairway to Heaven. 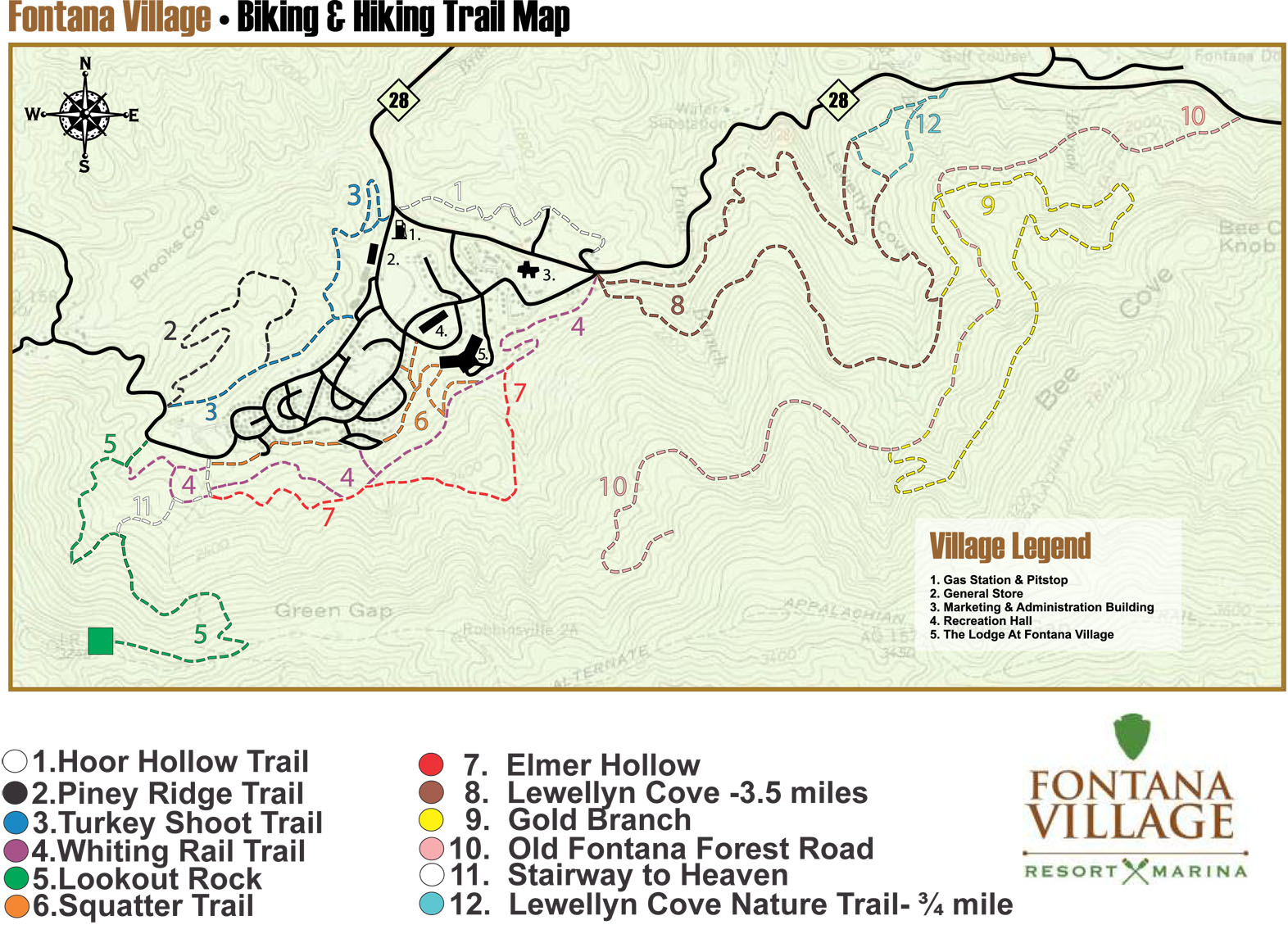 While it’s renowned for its whitewater offerings, the NOC also has a long history of supporting mountain biking around the region, offering a full-time repair shop and a vast rental fleet. The NOC carved out Flint Ridge, a 7-mile loop, on their adjacent property to give bored paddlers a chance to discover a new addiction. The initial climb is pretty tough, but it pays back with a sweet, switchbacking descent through the rocks and rhododendrons. Fun and fairly challenging, Flint Ridge might be more than most beginners are ready to tackle.

Panthertown is a remote, high-alpine valley in Jackson County sitting at 4,000 feet. While the trails here aren’t as notable as many others in the region, the scenery is spectacular, and a mountain bike is the best way to traverse the whole valley and see all of it. You absolutely must check out Schoolhouse Falls, which offers the incredible experience of walking 30 feet or so behind the curtain of a waterfall, with a cold pool out front for swimming and a beach full of crushed mica and garnets.

P’town is often called the “Yosemite of the East,” due to the many rocks faces and incredible ecological diversity found here. Several old logging roads drop in from the rim (quite steeply in several spots) to criss-cross the valley, and they provide fairly easy access to at least eight beautiful waterfalls. The trails that twist through the thick rhododendron, though, were cut by grizzled old mountain men, following whatever path they fancied. Some of it is crazy steep and twisty, and there are several hidden trails that are nearly impossible to spot. Recent signage has blocked off some of the gnarliest paths, but those runs were crazy monkey tunnels anyway. Pack a big lunch, as you’ll want to stay all day. And be prepared for the 1,000 foot vertical climb back out, no matter which route you take.

Ahh, Tsali, the Queen Mother of eastern singletrack. Mountain bikers have been flocking to these trails since … well … since there were mountain bikers. I first explored Tsali in 1990, and it felt like I’d ridden into mountain bike heaven. Tsali offers world-class views of Fontana Lake and the Great Smoky Mountains National Park from three different overlooks, and truly should not be missed during the peak Fall leaf season.

Four loops offer 40 miles of smooth trails running along the lake shore, dipping into dark coves for a quick stream crossing, then snaking back out for some fast contour runs through tight rhododendron tunnels. Tsali offers enough twists and hops to keep things interesting, enough climbing to keep anyone humble, and enough speed to keep riders grinning. Right Loop makes a nice intro ride, with a great overlook of the lake and several alternate return connectors to shorten the trip. Left Loop features a few surprise rock gardens, with two challenging climbs and a banging run back down from the overlook. Mouse Branch is pure fun, full of hops and pops, while Thompson Loop dishes out a groovy, mile-long downhill run at the very end, like the dessert after a fine banquet of singletrack.

Technically, neither Western Carolina University nor the Cherokee Qualla Boundary are part of the Nantahala National Forest, though it surrounds them both. So technically, I shouldn’t include their trails in this article. But trust me, you will be severely cheating yourself if you come out here to the Big Woods, and don’t check out the Whitmore trails at WCU and the Fire Mountain trail system in Cherokee. So much flow, so many hops, so much fun to be had – you simply need to add these trails to your Nantahala itinerary. ‘Nuff said.

Click below to continue reading about mountain bike events, lodging, and other activities in the Nantahala National Forest.

Great article! Nantahala is the best riding in North Carolina. I also agree that Fontana Village is a fine choice for lodging.

Load up the bicycle, kayak and motorcycle and enjoy a great time in a beautiful place.