Ever since I was exiled from Montana in 2008, Ive vowed to return. But taking any vacation, let alone a bike vacation, can be tough. So when my eldest told me she wanted to attend Montana State University, I suddenly had a built-in excuse to visit my beloved Big Sky Country. Taking her to college put me there; all I had to do was bring the bike along and . . . ta daaahinstant mountain bike vacation among one of the greatest concentrations of stunning singletrack on the planet! 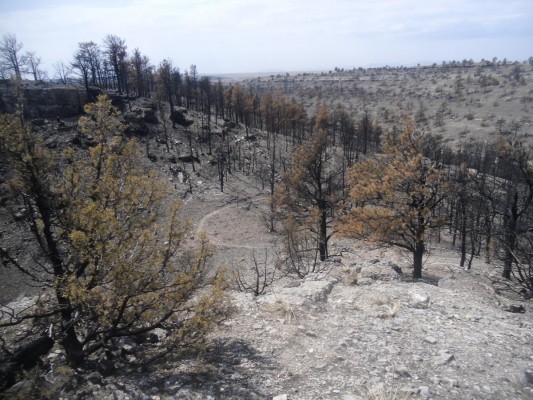 Midway through day one of my drive from Colorado Springs to Bozeman, I made a little detour off I-25 to check out a little-known trail system so I could add it to the Singletracks database. Guernsey Reservoir is well known among water sports enthusiasts, but the trails that line the limestone cliffs above the reservoir are relatively untraveled. The area was recently burned, so the combination of limestone shelves and blackened trees gave the area a forbidding appearance, but the singletrack, while somewhat limited, was sweet. There are two loops: the south loop is fairly short, but full of switchbacks and technical lines while the northern trail loop is more smooth. As a unique feature, the starting point is the high point above the reservoir and the trail goes downhill either waymeaning you have a stiff climb to finish. I probably wouldnt go too far out of my way to hit this one, but it was unique, interesting, and beat the heck out of going all day without riding! 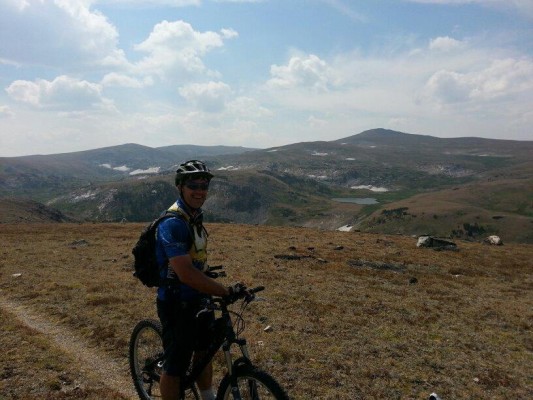 Let me cut to the chase on this oneLine Creek Plateau is a must for any adventurous riders bucket list. Here you’ll find about 10 miles of riding across a broad, high alpine plateau followed by an all out plummet of 3,200 verts in about 4.5 miles. Two things made this a most excellent dayfirst, I met up with an old colleague in Billings who was able to break free to accompany me on the ride; second, since my daughter is a non-rider, I had a ready-made shuttle driver to take us to the top!

The entry into the plateau requires a drop across a deep drainage passing by a couple alpine lakes. Once on top of the plateau, we lost the trail many times as rock cairns were few and far between. Even when there were visible cairns, they seemed to mislead us half the time. Even though the trail traverses a plateau, that doesnt mean its flatyou will gain and lose significant chunks of altitude many times and the tundra surface will wear on your legs. While this was a shuttle ride for us, it still wasn’t a cake walk. Many times, we thought we were coming to the end of the plateau, but we weren’tthere always seemed to be yet another climb across the next knoll.

When we finally reached the end of the plateau and started the downhill, we were so ready for itand boy, was it worth it. The only parts of me that got tired for the next 5 miles were my middle fingers from squeezing the brakes. 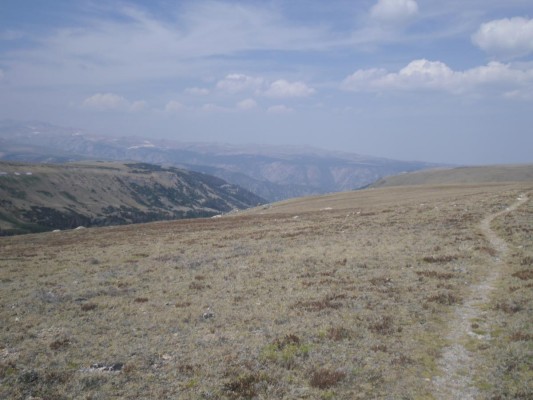 The scenery throughout was spectacular, especially up top, where there were million mile views into both Montana and Wyoming. Unfortunately, they were generally obscured by the smoke drifting in from wildfires in Idaho. Smoke notwithstanding, this was one of my all-time best days on knobbieshighly recommended if youre an experienced biker and get the chance to ride it.

I spent days 3 and 4 participating in Parent Orientation at MSU, which was great fun, but left zero time for riding. So, on day 5 I caught up by hitting two of Bozemans local favorites. 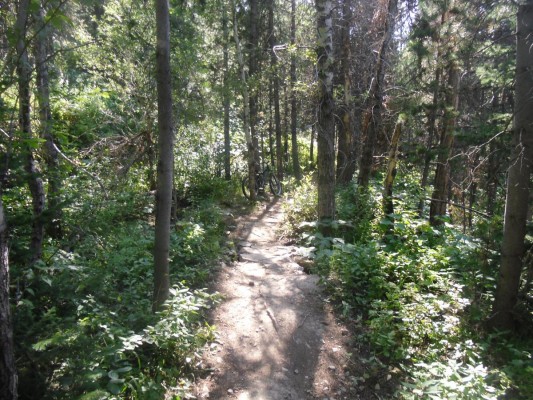 The Leverich Trail is a purpose-built MTB trail–a lollipop that is mostly pop with a short stick. It does, however, climb quite rapidly, gaining 1,400 verts in only about three miles. The subsequent downhill was built for maximum flow with wonderfully bermed corners. This is the type of trail that invites just about anybody willing to earn their turnsI saw spandex-clad aerobic junkies along with armored-up kids who pushed their heavy rigs up much of the climb. This trail is also a great success story for the locals. Built through the sweat equity of a dedicated band of locals, it replaced some bad, unsustainable and quite possibly illegal trails and did so within the good graces of the private landowner. Hooray for partnership! 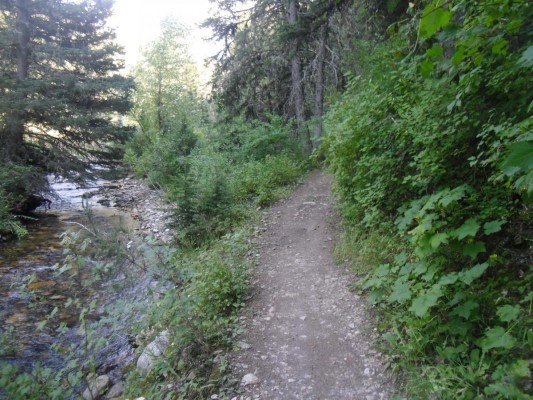 South Cottonwood is a creek that creates a lush drainage just south of Bozeman, a couple canyons to the west of Leverich. This is a local favorite for all trail users as it is relatively easy (up to a point), densely wooded, and just plain pleasant in every respect. After a stiff switchback climb from the trailhead, the grade mellows for the next four miles, save for an occasional foray up and away from the creek. There are a number of loop options from this canyon, all of which require serious commitment, lungs, and legs. Having already partially fried my quads on Leverich, I opted for a simple out-and-back totaling about 13 miles.

Later I learned the trail had been cleared of major deadfall only two days before my ride.As it turns out, the local MTBers had teamed up with an equestrian group to clear the trail. The horses carried in the chainsaws and the MTBers used them to cut through all the blockage. Hooray for teamwork and harmonious relationships among trail users!

This is a great place to bring a newb or improving rider as it gets more technical in stagesanybody can choose their personal level of pleasure and/or pain. 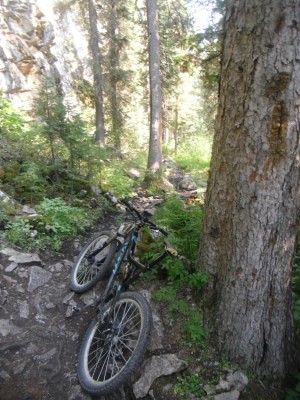 With four days to go on my trip there was still plenty of singletrack left to explore. Stay tuned for the continuation as I hit Chestnut and Buck Ridge and get a chance to help some of the locals with trail maintenance.

Great trip report, I can’t wait for Part II! I haven’t ridden in Wyoming or Montana but those are both places I’ve always wanted to visit. This is good stuff as I start to plan my summer MTB trip for 2013…

I am riding Curly Lake Trail in the Tobacco Roots on Thursday if you are interested in joining. Also, Chestnut is full of amazing views after a pretty stout climb. If you can get a shuttle, link it with Bear Canyon (there may be a link between trailheads, just haven’t found it). I didn’t make the loop but rode to the top of Chestnut yesterday. Great trail, and as with most in MT extremely unique terrain and views. Feel free to email me at brday10@gmail.com if you want to ride Curly on Thursday (24 miles 4000 ft climb).

I love the look and sound of Line Creek Plateau.

Great to hear about some biker/equestrian team work.

Looking forward to the next recap.

And now I have yet another destination on my wishlist … 😀

I made it to Emerald back when I lived in Great Falls. The lake is gorgeous and the trail pretty nice. It is now on a shared days schedule, so it’s off limits to bikes on certain days (fri and sat if I remember correctly). In any case, if that’s your destination, check the USFS website to make sure it’s a bike day before you go.

If you want a similar ride with even better singletrack, even more stunning views, no restrictions and almost no people, drive west a bit tot the Tobacco Root mountains and hit the Lost Cabin Lake trail. It’s similar in distance and elevation gain, but I found it better in every other respect. Of course, the mac daddy is Curly (directly across the valley from Lost Cabin Lake and Louise Lake). Brday–let us know what you encounter–when I was in Bozeman, I was told the long, dry summer and excessive moto use had really tore up the switchbacks, but the ridge was still pristine. Looking forward to hearing your experience. Enjoy!

If you’re thinking emerald it is probably closed due to a 10,000 acre fire burning south and west of hyalite. Really throwing a wrench in the Bozeman circuit and a Hell of a lot of smoke at us. Closures in south cottonwood Leverich and hyalite last I heard.

We did Leverich last year with a friend of ours from the area and I swore he was trying to kill us! Still, the downhill was sweet and the trail features were entertaining for sure!

I can’t wait to start biking in Montana next year! Although, I’ll have to work extra hard in the off-season to make sure I have my legs and lungs ready.

WooT! Line Creek Plateau gets some press. Still one of my favorite rides.
Red Lodge has some of the best rides ever.
While you are in the area, check out Silver Run across the canyon.

4 or 5 miles up Rock Creek from Maurice and Rock Creek Resort near the mouth of Lake Fork, is a trail that will take you up and over Silver Run Plateau and down Silver Run Creek. It is a brake burner descent after a 3 lung climb.

I do not recall if Ingles Creek or Silver Run Creek is the better trail…it has been almost 20 years since I last rode those areas. Perhaps someone can shed some light.

Small world. I dropped my son off at MSU at the same time and probably attended the same Parent Orientations. I only had one day to enjoy the local trails and decided to ride to Emerald Lake. Awesome ride and great scenery. Can’t wait to go back.