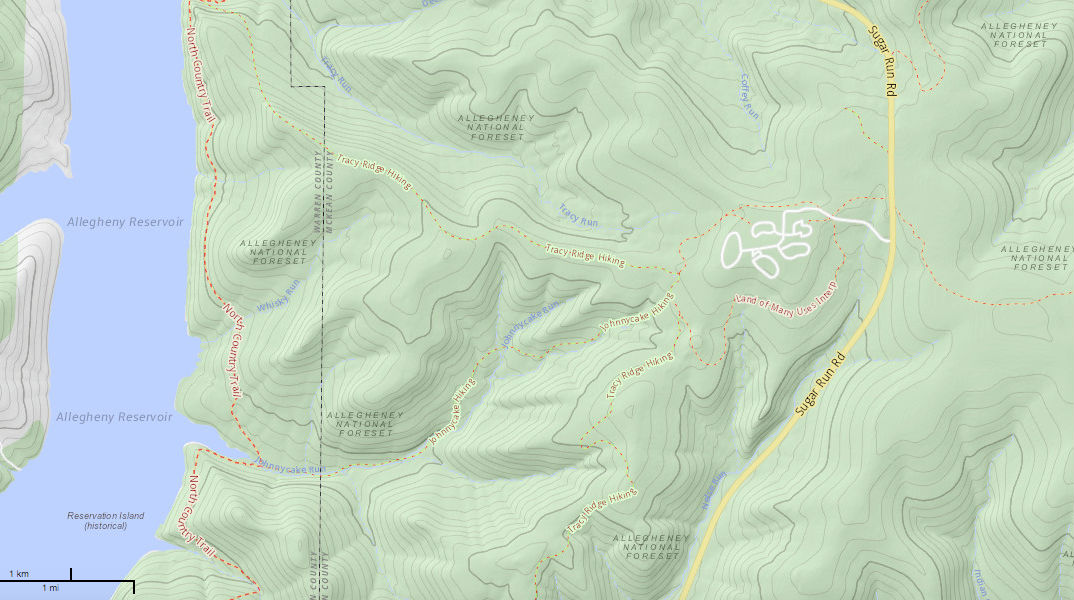 A proposal has been put forth that mountain bikes be allowed on a historic trail in the Alleghany National Forest: Tracy Ridge, in Pennsylvania. The USFS conducted an environmental assessment about the fitness of this trail for mountain bike access and they found that “there is no evidence that bike use of the area would degrade the trails at all and certainly to the point in which wilderness designation would be improbable,” according to an article in the Times Observer.

One major concern of those in opposition to the proposal to allow bikes on this trail is that if bikes were allowed, it would be harder to make this area a designated Wilderness. The USFS thoroughly dismisses this concern:

“It is not clear how shared use trails in the Tracy Ridge area would disqualify the area for wilderness designation… Any impacts related to solitude and primitive recreation would immediately disappear upon designation of the area as wilderness by Congress. There is no evidence that shared use would degrade any of the ‘special features’ identified for the area – including mature forest, wildlife and historic [sites].

“Furthermore, evidence suggests that Congress will designate Wilderness despite the presence of trails that allow bikes. For example, in 2015, the Boulder-White Cloud Wilderness was designated by Congress. Within the new Wilderness, more than 50 miles of trails previously open to bikes were closed to bikes. In this case, the presence of shared use trails did not limit the area’s designation as wilderness.

“Overall, no evidence was provided during public scoping that shared-use trails at Tracy Ridge will adversely impact any future wilderness considerations for the area.” (Emphasis added.)

This statement is notable because the exact reasoning put forth by anti-mountain bike lobbyists mentioned in this case has been accepted by the Forest Service in other places in the nation, most notably Montana. In response to what many view as the illegal exclusion of mountain bikes from trails in Wilderness Study Areas in Montana on these same grounds (fear of degradation of the resource and subsequently not being able to designate an area as Wilderness), mountain bikers along with other groups in Montana have filed a lawsuit against the USFS.

While this statement highlights the dissonance in mountain bike access from one national forest to another, despite being within the same land management agency, more literature and statements like the one issued by the Allegheny National Forest can only help mountain bikers show that they have minimal impact and don’t degrade natural resources.

To share your comments and to speak in favor of mountain biking in the Allegheny National Forest, check out IMBA’s action alert, here.

Trails
The Envy of the PNW: the Organization and Woman Behind...
Community
Behind the Scenes at Dirt Rag's Dirt Fest
Gear
The Remount: New Bar Remote Mounting Doohicky from Lindarets
Culture
Competitive Cyclist Updates Strava Connect Program with Goals; Gives Away...

This IS actually a pretty big deal, a step in the right direction anyway.
Refreshing to see some actual science and solid commentary that isn’t political fluff.
Thanks for posting this Greg.

Yeah thanks for sharing this Greg. Good to know that somebody has their head screwed on right! 🙂

You can submit comments to support this process until Jan. 25, 2017 – https://www.imba.com/alert/potential-new-trail-access-allegheny-national-forest-needs-your-action

Wow, finally, reasoning and rationale making some progress. There is still a little hope that maybe someday wild land recreation management will be based on research and rationale and not politics.

Just a reminder, the Alleghany National Forest decided NOT to have mountain bikes at Tracy Ridge.