After living it up and embracing the plush lifestyle of a downhill mountain biker, getting to ride the chairlift up and bombing straight back down the mountain run after run, I had to get in a cross country ride the next day to earn my turns.

An XC ride offered the perfect opportunity to ride the trails on the opposite side of the lake from Snow Summit Mountain Resort. Thanks to Gavin Burkes comprehensive knowledge of the local trails, I didnt even have to worry about planning the route!

Gavin was an entertaining tour guide and is a very interesting character. Originally from Australia, Gavin has spent years traveling to Big Bear Lake to race mountain bikes and vacation, and back in the 1990s he spent a year driving around North America riding his mountain bike. Eventually he made it over here full-time and has been living in Big Bear ever since. 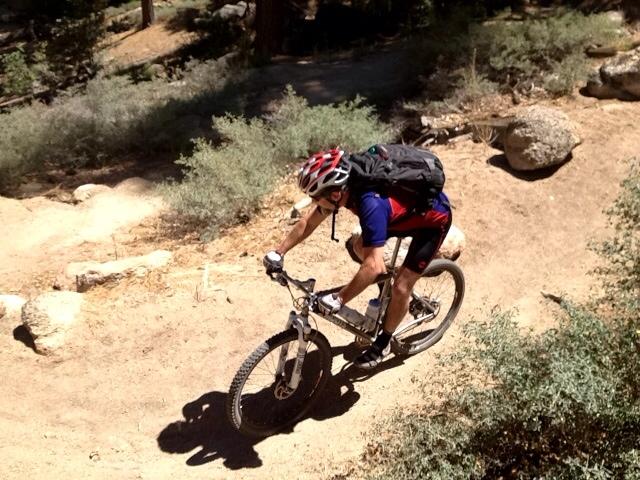 Gavin Burke heading into a switchback. Gavin was riding a titanium Moots 26er that he’s had since the early 2000’s, with a tricked out XTR drivetrain and Fox fork… and he was ripping on it! He could have torn my legs off on the climbs if he had been trying.

I knew the ride was going to be a long one when, seeing me loading my gear in the truck, Gavin rolled up to our rental cabin and said, oh, were just going to ride from here. I assumed wed have a ways to drive to get to the trails all the way on the other side of the lake, but it was only a couple of miles of paved pedaling until we turned off into a church parking lot and started climbing up the side of the ridge on the unmarked Dont Shoot Me trail.

Having received its name from the shooting range that it runs past, Dont Shoot Me is a very faint trail that even Gavin had trouble following at one point. After a few miles of climbing the rocky singletrack, we dropped out onto the Van Dusen Canyon forest road and kept cranking on up the mountain. 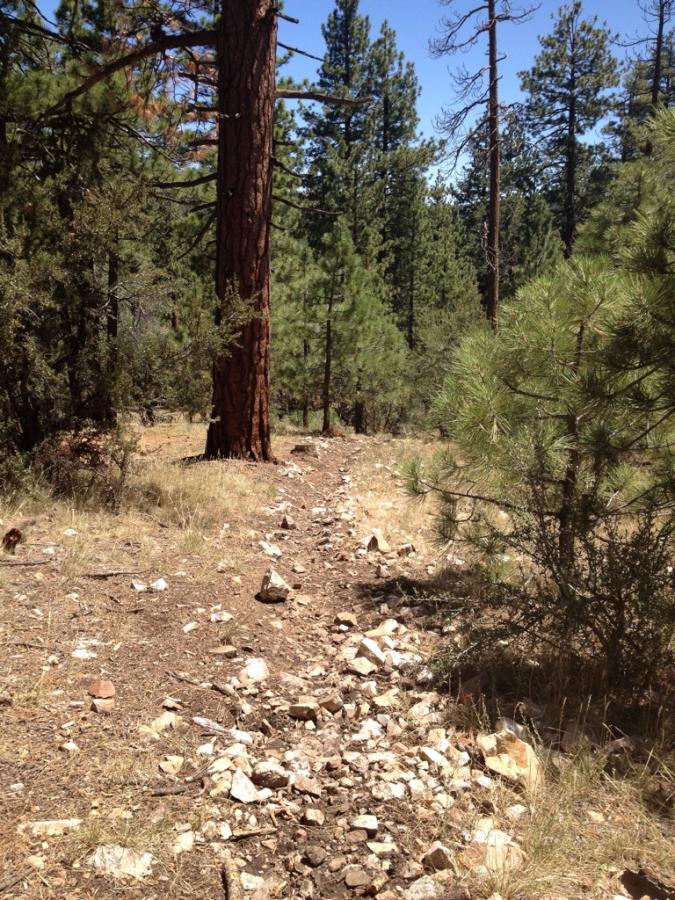 Eventually as we were rolling along Gavin shouted, this is it! I didnt see the trail at first, but eventually noticed the unmarked singletrack heading left off the road and continuing (you guessed it) up the mountain ridge. Christened Kennys in honor of a phantom character named Kenny who supposedly built and maintains the trail, it is primarily a moto trail that runs through the high Holcomb Valley. Sitting at a much higher elevation than Big Bear Lake, Holcomb Valley is the next valley over to the north. Kennys rolls through the valley, neither gaining nor loosing significant elevation. Since it’s primarily a moto trail, the singletrack is a little eroded in spots and some of the climbs can be pretty steep, but in general it’s a great intermediate singletrack trail with some beautiful views of the surrounding mountain peaks. 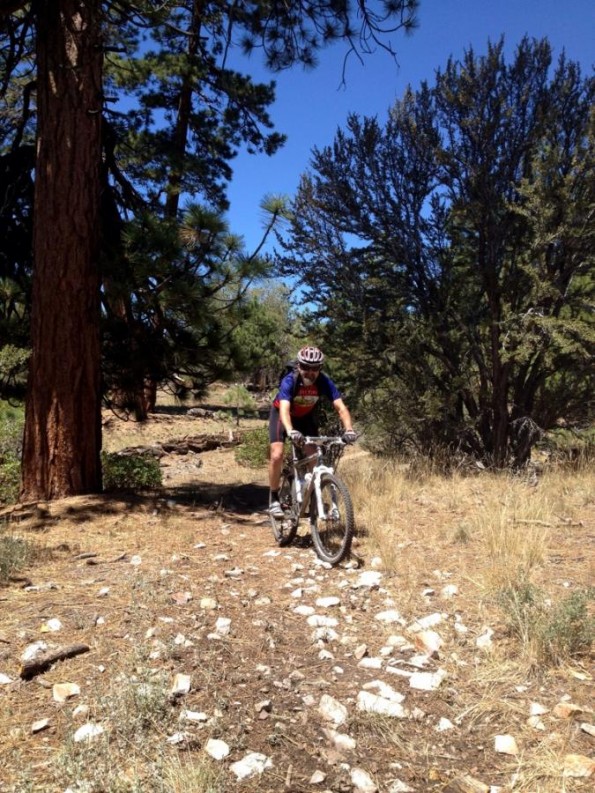 After all the climbing we had done up to this point, it was about time for a bit of a reward for all our pain! After Kennys, we connected over to the top of the Cougar Crest, a popular trail that offers up some gorgeous views of Big Bear Lake below, the resort on the other side of the lake, as well as the town of Big Bear Lake and the marina. 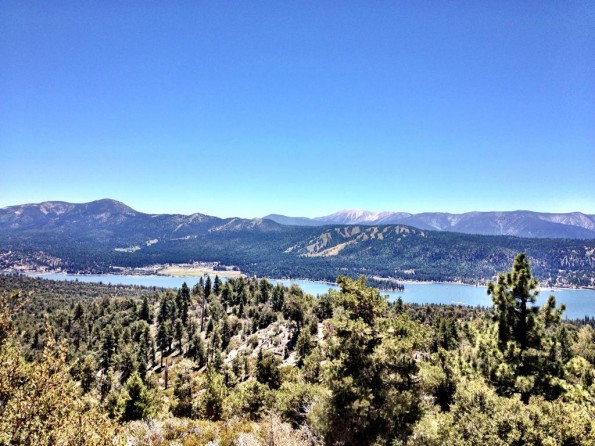 While I like to climb well enough, the real reason I ride is to descend… and the Cougar Crest descent is superb. Frankly, Cougar Crest might just be the best trail in Big Bear. See that lake in the photo above? In just 2.5 short miles Cougar Crest drops all of that elevation, about 900 vertical feet, back down to Big Bear Lake far below.

The rocky, technical singletrack is very different from the trails on the south side of the lake–in a good way. Where many of the trails on the south side are a combination of sand and loose rock with plenty of baby heads flying around as you blast down the mountain, the rocks on Cougar Crest are big and embedded in the trail surface, providing a classic rock garden feel that will punish your suspension–and your extremities, if you don’t pay attention! Toward the bottom of the trail, the singletrack opens up and smooths out, allowing you to blast down at mach 10! Just keep your eyes open for the moving obstacles (hikers). 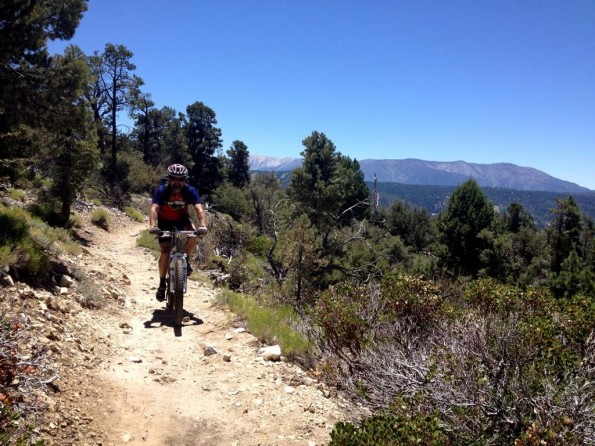 Gavin on the Cougar Crest trail.

At the bottom we popped back out onto the highway that circles the lakebut our ride wasnt nearly over yet. We hung a right and pedaled further down the lake shore for a few miles, eventually turning up forest road 3N14 to climb back up into the mountains. While we didnt gain as much elevation on this climb as we had on the previous one, we spent a while cranking it out in the hot afternoon sunlight.

Toward the top of the climb we took a left into the Hanna Flat campground, and Gavin assured me that after a short initial climb on the Hanna Flat singletrack, the climbing would be over. 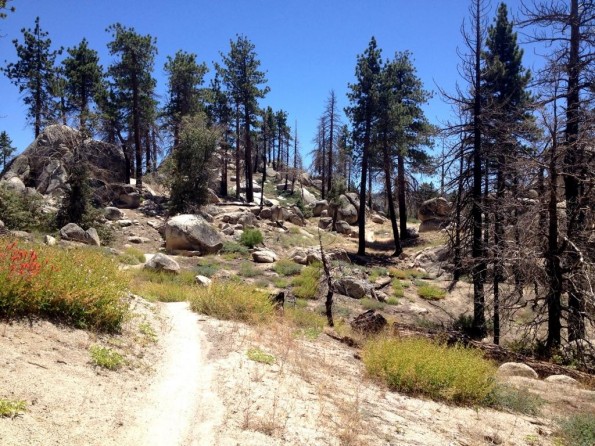 While Cougar Crest and even Kennys and Dont Shoot Me were all rather rocky, Hanna Flat was the exact opposite. The smooth, flowing trail meandered back down the mountain, greeting our tires with a gravel-over-hardpack surface that was very reminiscent of Buffalo Creek and some places on the Colorado Trail. 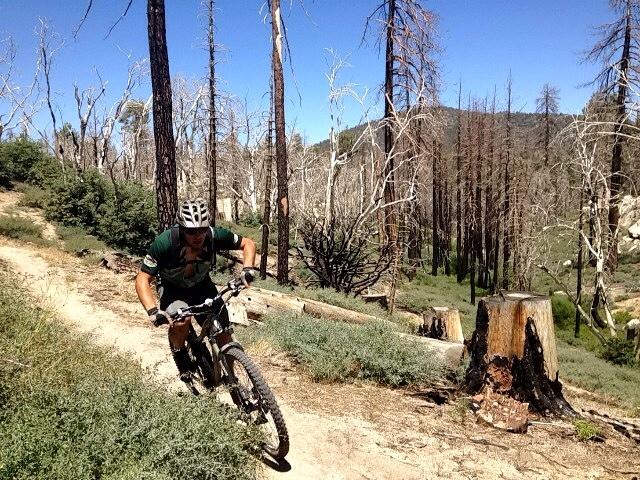 The author tearing down the Hanna Flat trail on the Jamis Dakar SixFiftyB Pro.

After dropping out onto a forest road for half a mile, we took a left and jumped back onto singletrack on the Grout Bay trail to finish off our high-speed descent. While Hanna Flat winds its way down amid rock formations and trees up in the mountains, Grout Bay hugs the side of the ridge as it drops toward the water, offering up some great views and challenging switchbacks thatll sneak up on you along the way.

We finally descended to lake level for the last time. With a short 5-6 mile pedal on pavement to get back to town, I was glad we had passed on an optional side trail earlier because this was just about all my legs could handle! On the ride back Gavin would just be pedaling an even pace and pull away from me, and then realize he was dropping me and slow down and wait… he was looking frustratingly fresh, but I was seriously worked over. After 33+ miles of grueling big-mountain riding in the hot Southern California sun, some delicious Buffalo Chicken footlongs from Subway were definitely in order!

Many thanks to Gavin Burke for sharing his local trails with me, and to Dan McKernan and the Big Bear Lake Resort Association for making this trip possible! For more information on Big Bear, be sure to check out bigbear.com!

Was anyone firing at the range as you rode Don’t Shoot Me?

No, thankfully we didn’t see anyone there!

That’s awesome. Some of my funnest rides have been when I could pick up a local to squire me around. When I asked one guy how close I should follow, I didn’t know I was telling a funny joke. He waited for me at the top of every hill on a single speed.