After a couple days in Boulder, it was time to head south to Salida for the final chapter of my trip to Colorado, and the event which I had planned my trip around: the Singletracks Meetup.

The Singletracks Team met early on Saturday morning in the parking lot outside of Elevation Beer Co, which I had discovered the day before when I arrived in Salida searching for an IPA. I was the first to arrive, as I needed to wrench on my bike a little before we took off (wanted to make sure those bolts were tight!). The others arrived shortly thereafter. I was the only female–not at all an unusual place for me to be, but I’d also never met any of these guys before, aside from Aaron. Combine that with the fact that I had no idea what the riding would be like, or how I would fare above 11,000 feet of elevation, and I began to feel slightly out of my league.

We shuttled up the mountain to Monarch Pass, where we would begin our ride on the Monarch Crest Trail. While waiting for the drivers to return, I took pictures of my bike in front of the Continental Divide sign, and my unusual rig drew some attention. I ride a Salsa El Mariachi with a rigid fat front and a 29er rear–not a setup you see much outside of my hometown circle of riders, where it’s actually pretty common (we call it the Huntingdon special for that reason).

The drivers showed up, and we were off, climbing up doubletrack for a while before bearing right onto the Monarch Crest Trail. The trail continued to climb gradually, finally emerging above treeline. The views were incredible! The trail itself was a little rocky in spots, but for the most part relatively smooth, so I could focus on the scenery around me instead of gripping the bars for dear life. 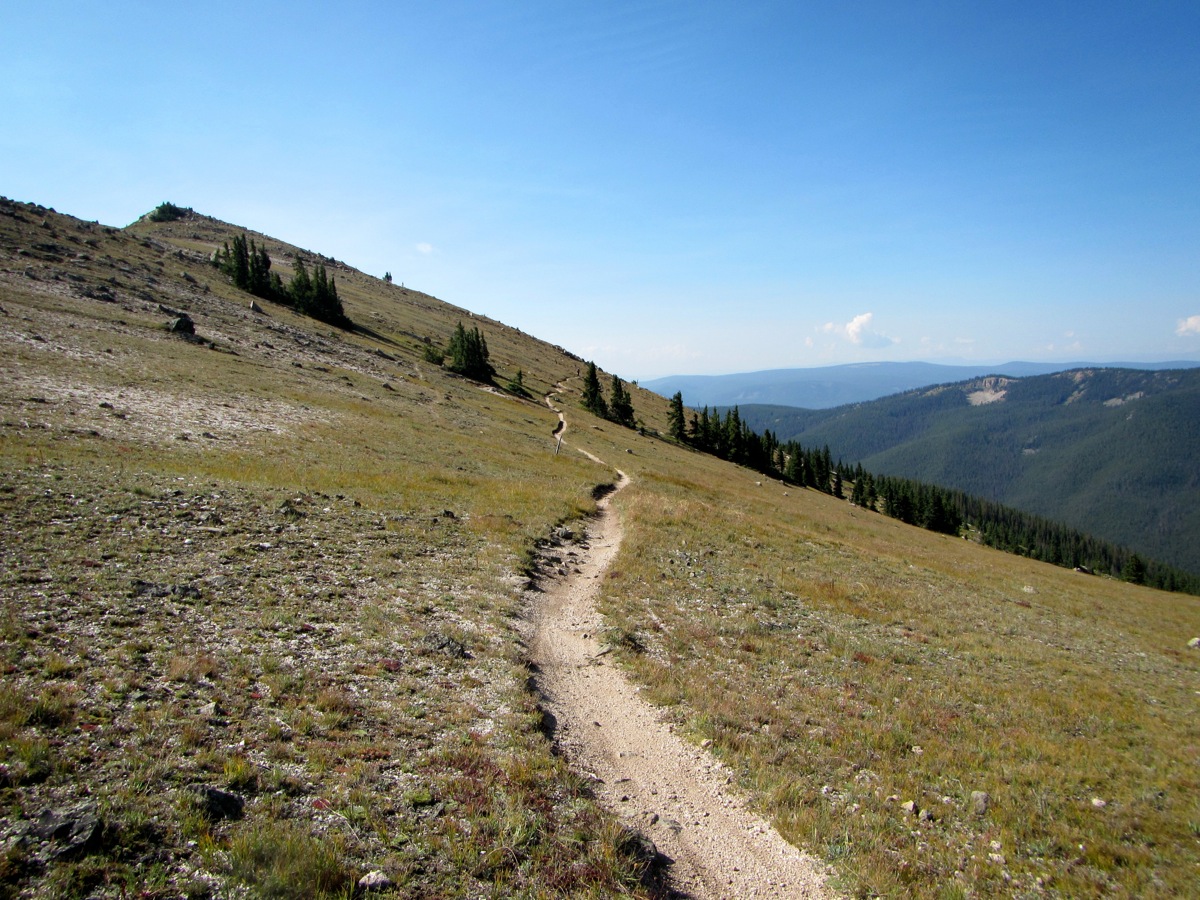 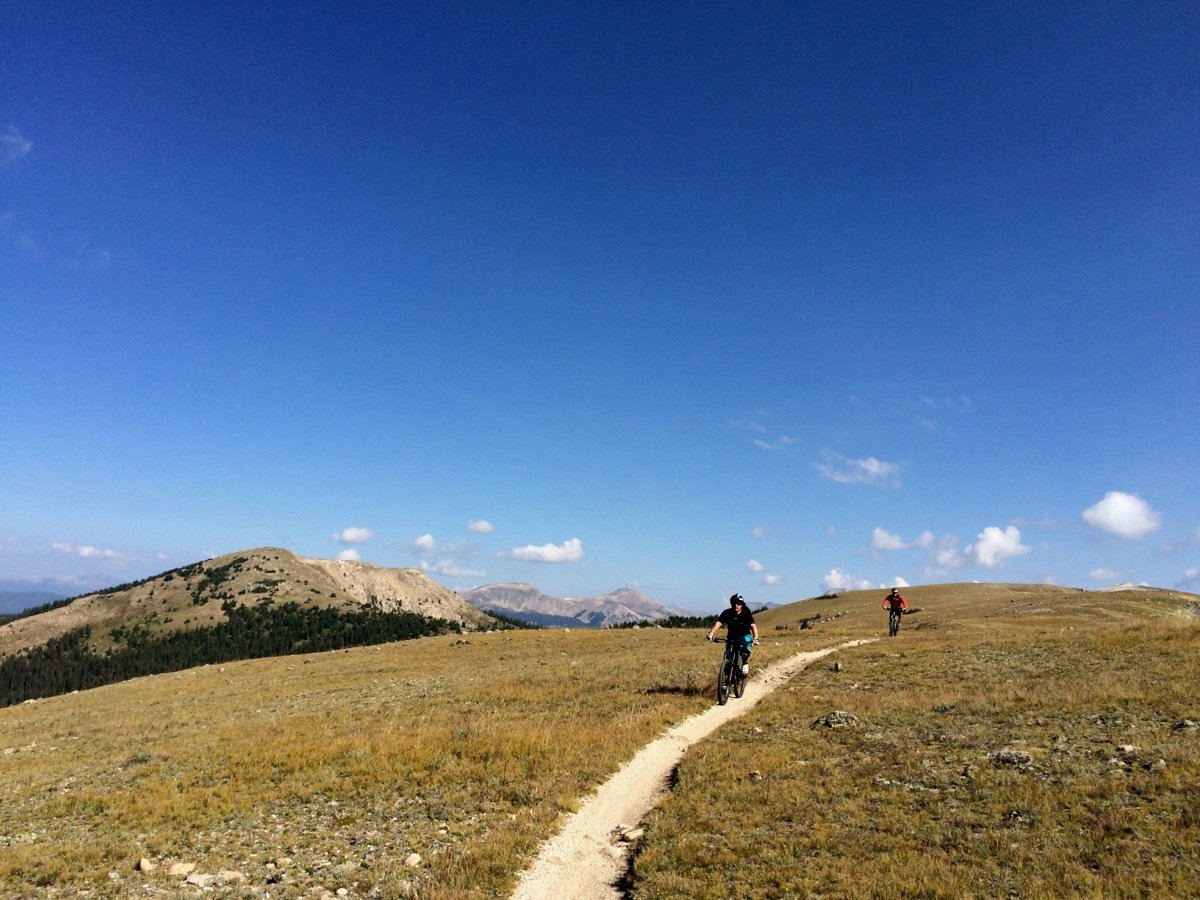 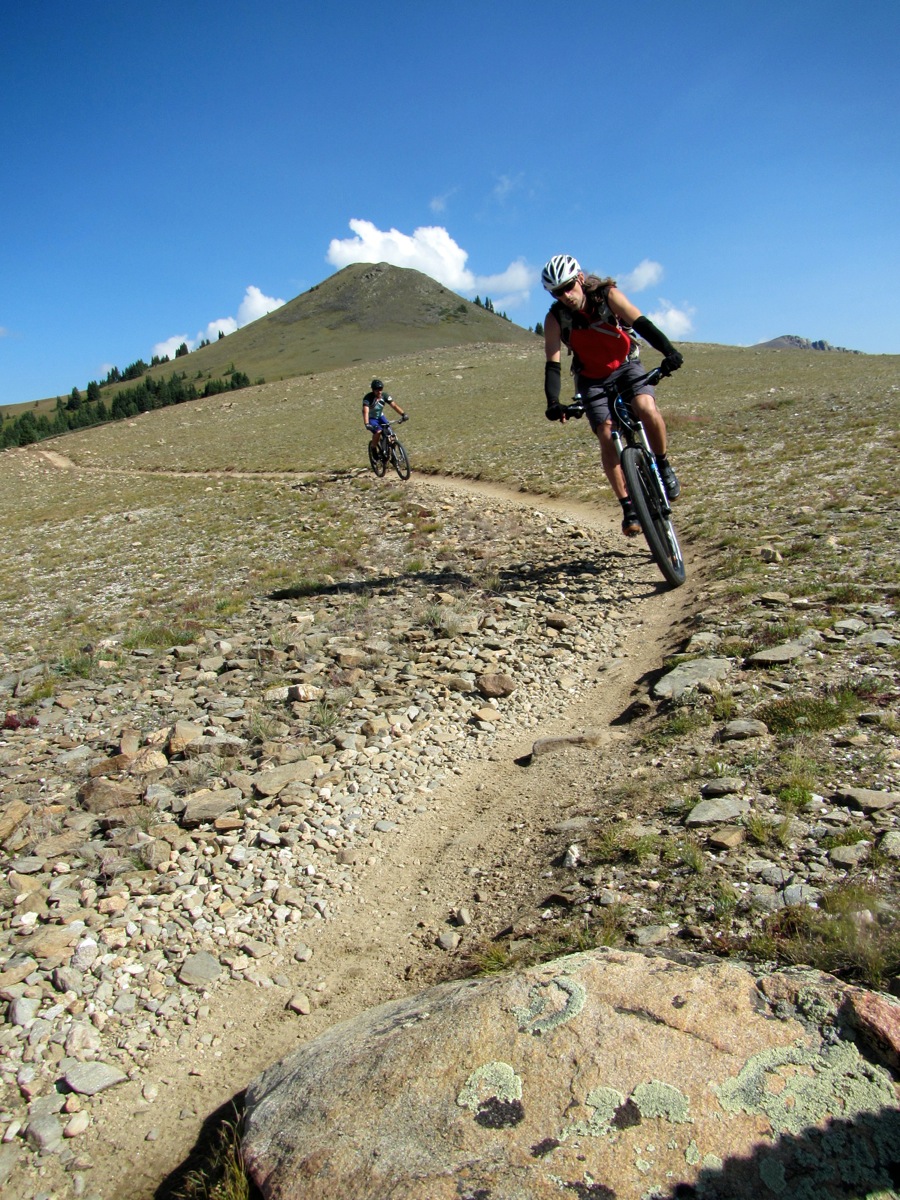 We rode along the mountaintop for a while before dropping back below treeline and onto Agate Creek Trail.

The Agate Creek descent was deeply rutted, and pretty chunky in spots as it descended off the mountain, then mellowed out a little as it dropped farther into the valley. Once in the valley, the trail rolled and meandered along the stream, with short descents followed by short climbs. This section of trail was a lot smoother than the initial descent off the Monarch Crest, but that would change soon.

The very bottom of Agate Creek brought some rocky sections and a lot of stream crossings. I kept seeing various car parts and even some mangled metal vehicle frames strewn about in the narrow valley we were now riding in, and I realized that there was a road above us. These were the remains of vehicles that had met an unfortunate end.

On a happier note, the stream crossings proved to be a lot of fun! 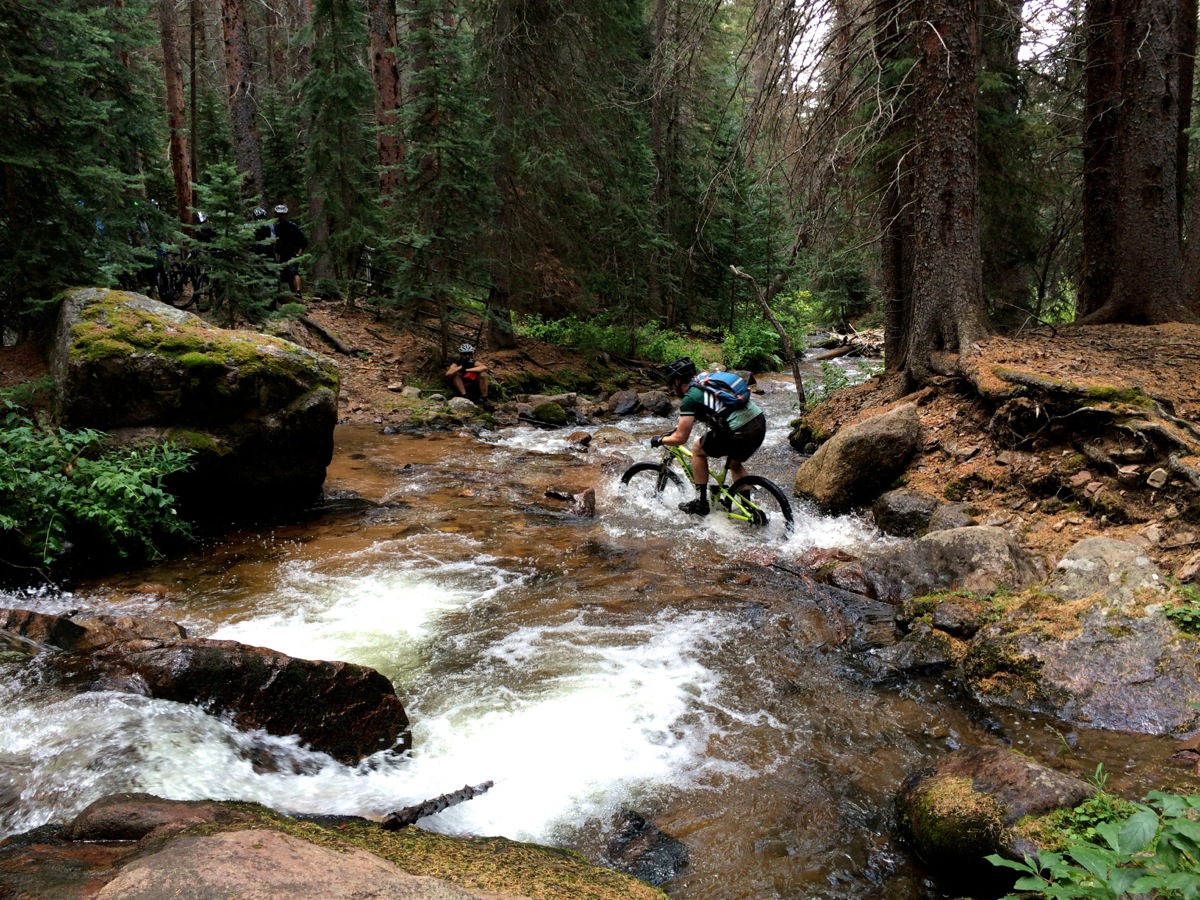 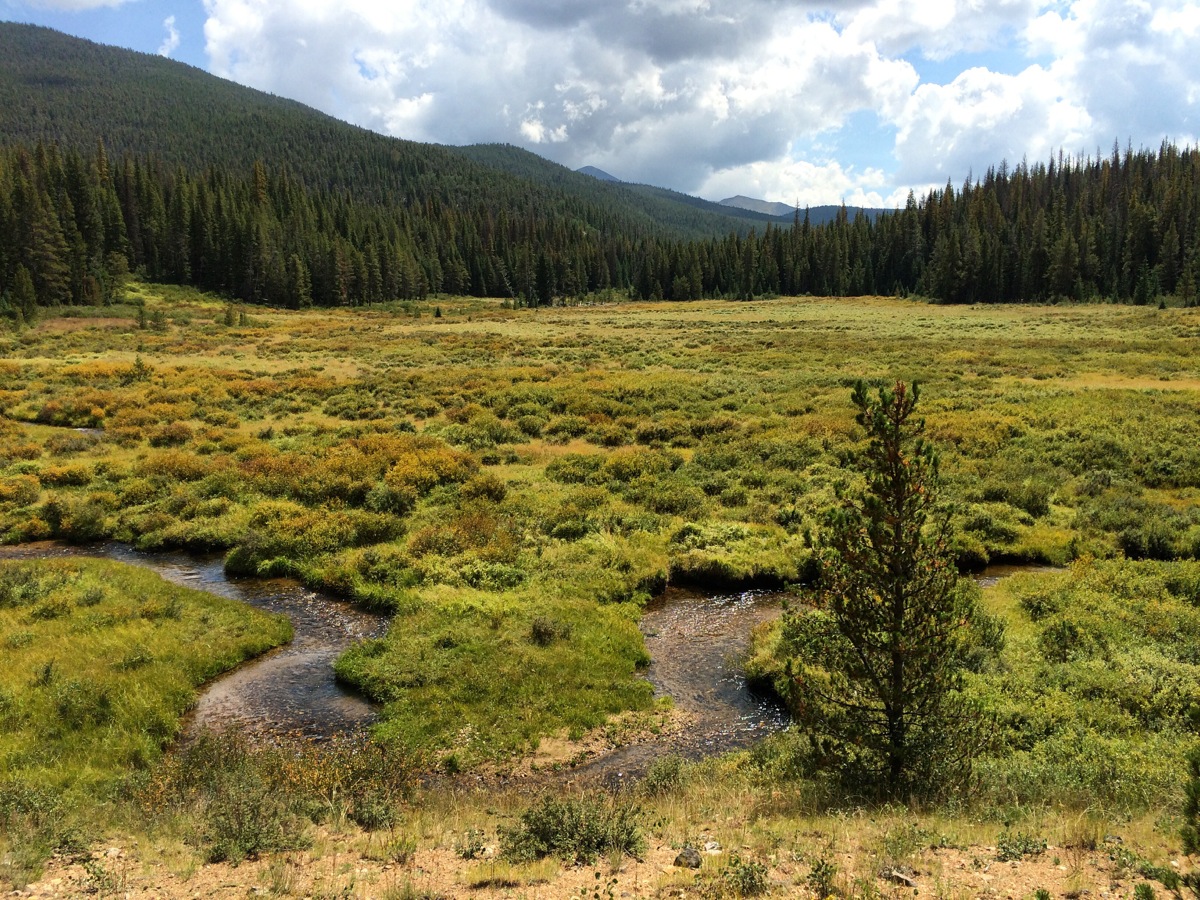 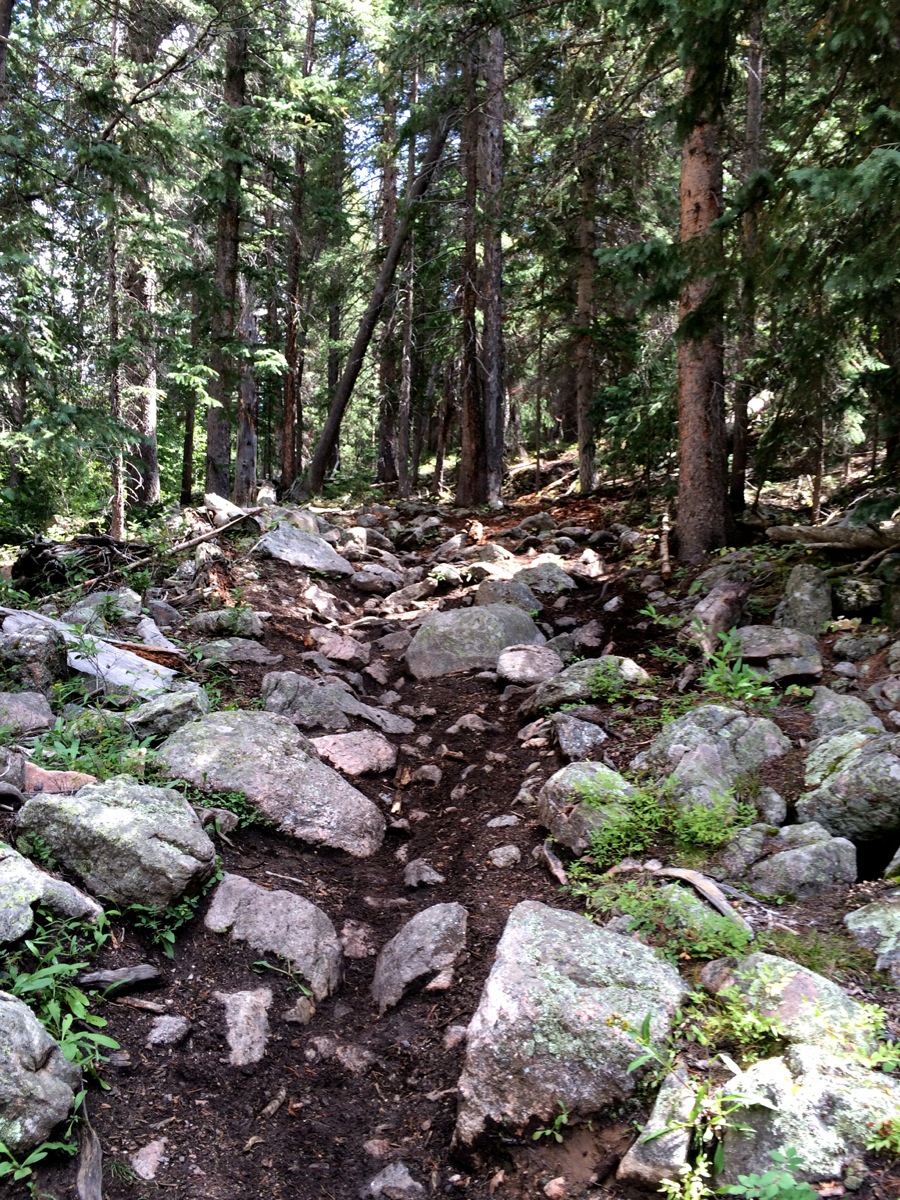 After one quick hike-a-bike, we were on the home stretch, a short dirt road leading to the cars. After lunch, the rest of the group opted to do another ride, but I decided to pass on it. I was whooped. I went back to my campsite and rode gravel roads around San Isabel National Forest for a while instead.

The next morning was an early one. Waking up with not enough time to make coffee before heading to Greg’s house to rendezvous with rest of the crew, I decided to hit up a small gas station I had seen along the road the day before. However, I pulled into the parking lot only to find that they were closed. Uh oh. It looked like I had to go without my daily ritual. I guess I would survive.

We drove past where we had begun our ride on the Monarch Crest, down into the next valley and back up a dirt road, where we parked next to a grove of aspens. There was no shuttle today for the Canyon Creek Trail loop. We’d climb 4000 feet in 10 miles, and then descend back down.

The climb began on the same gravel road we’d driven in on. It was gradual at first–a nice warm-up. We passed through the ghost town of White Pine. Eventually, the road became steeper, rockier, and washed out. We climbed for miles, alternating between pedaling and pushing, with some breaks to take pictures in between. 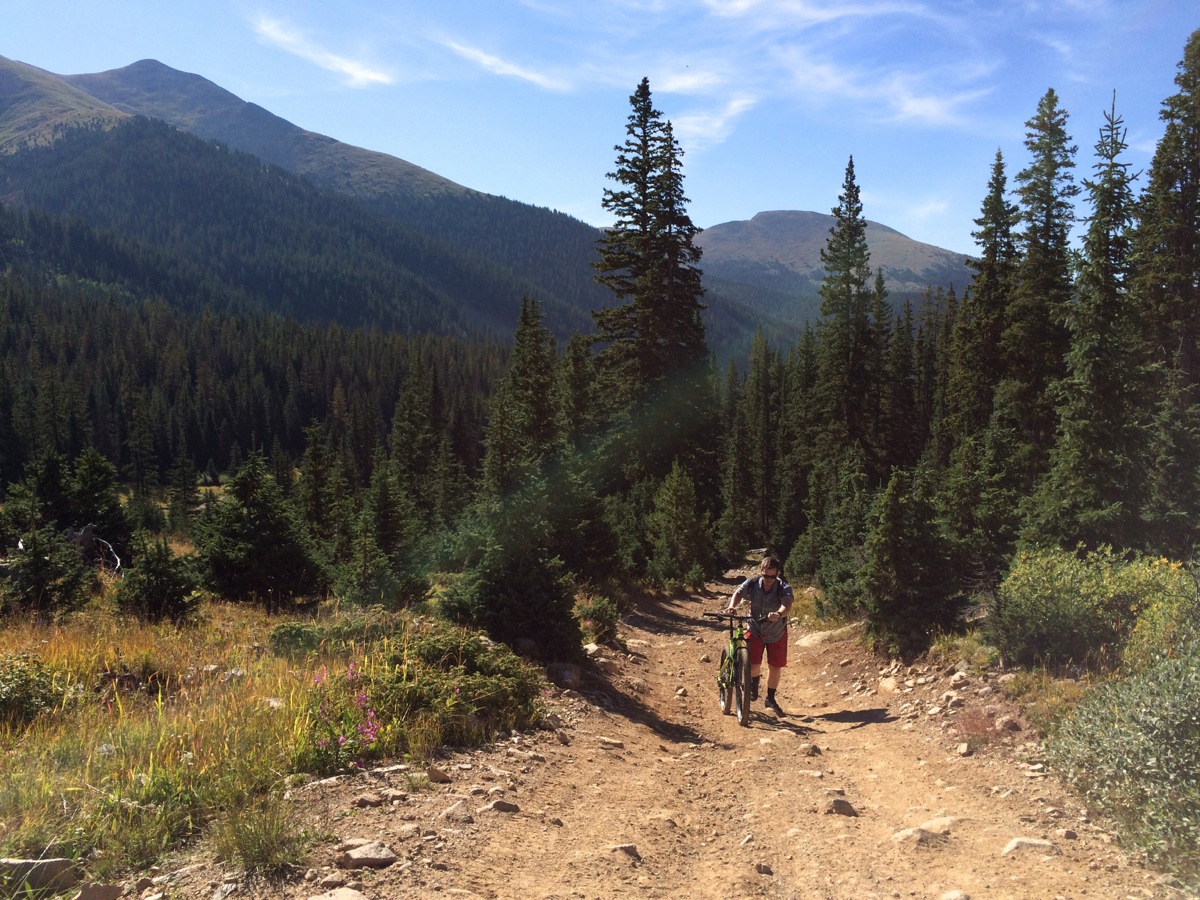 Then the real hike-a-bike began, up steep, boulder-strewn singletrack that was pretty much impossible to ride. We pushed and carried our bikes. I could see those who were ahead of us switchbacking up the mountain. It seemed like we still had so far to go. 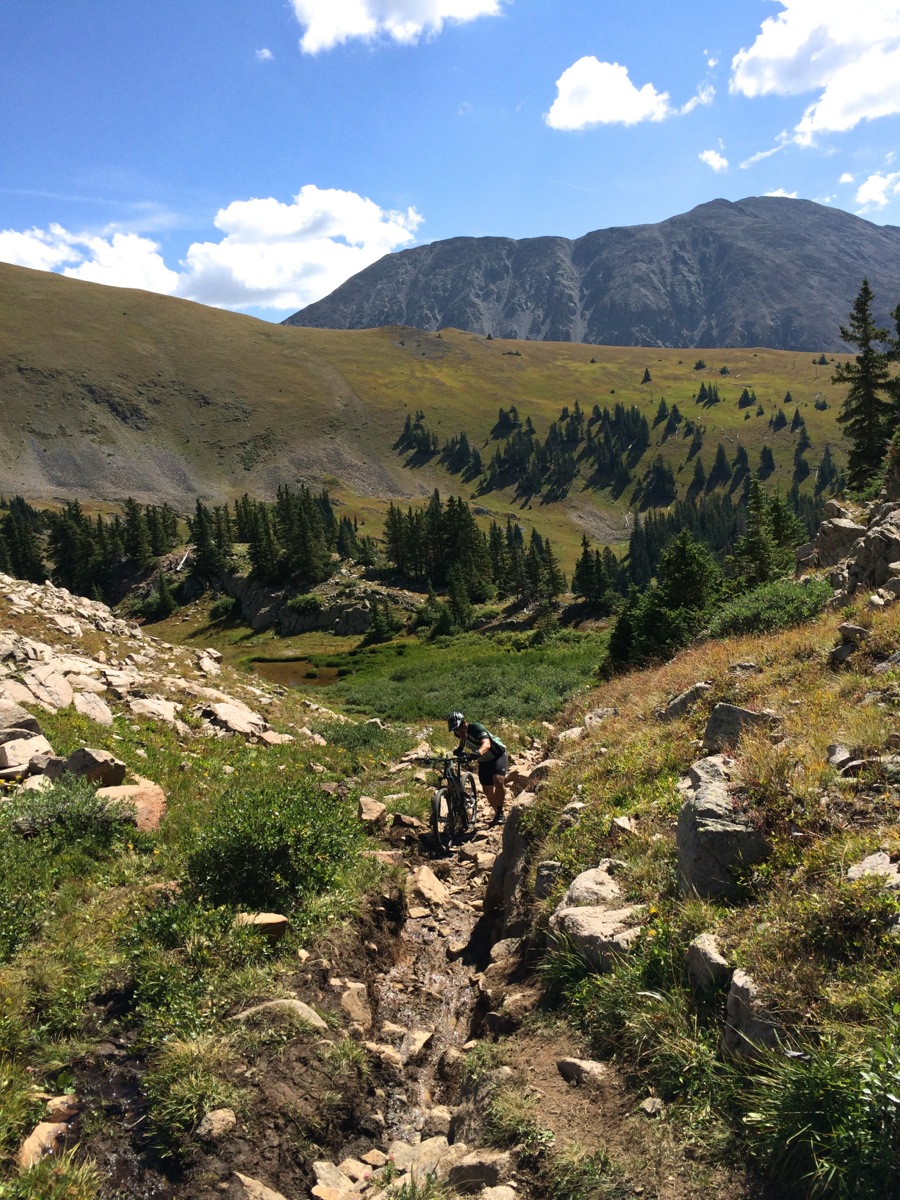 As we gained elevation, my breathing became more labored. I developed a headache–I’m not sure if it was due to the altitude or the lack of coffee. I’d push for a minute or so, and then have to stop and catch my breath. My lungs weren’t used to 12,000 feet!

But finally, we made it to the top, and the views were worth every second of pain. 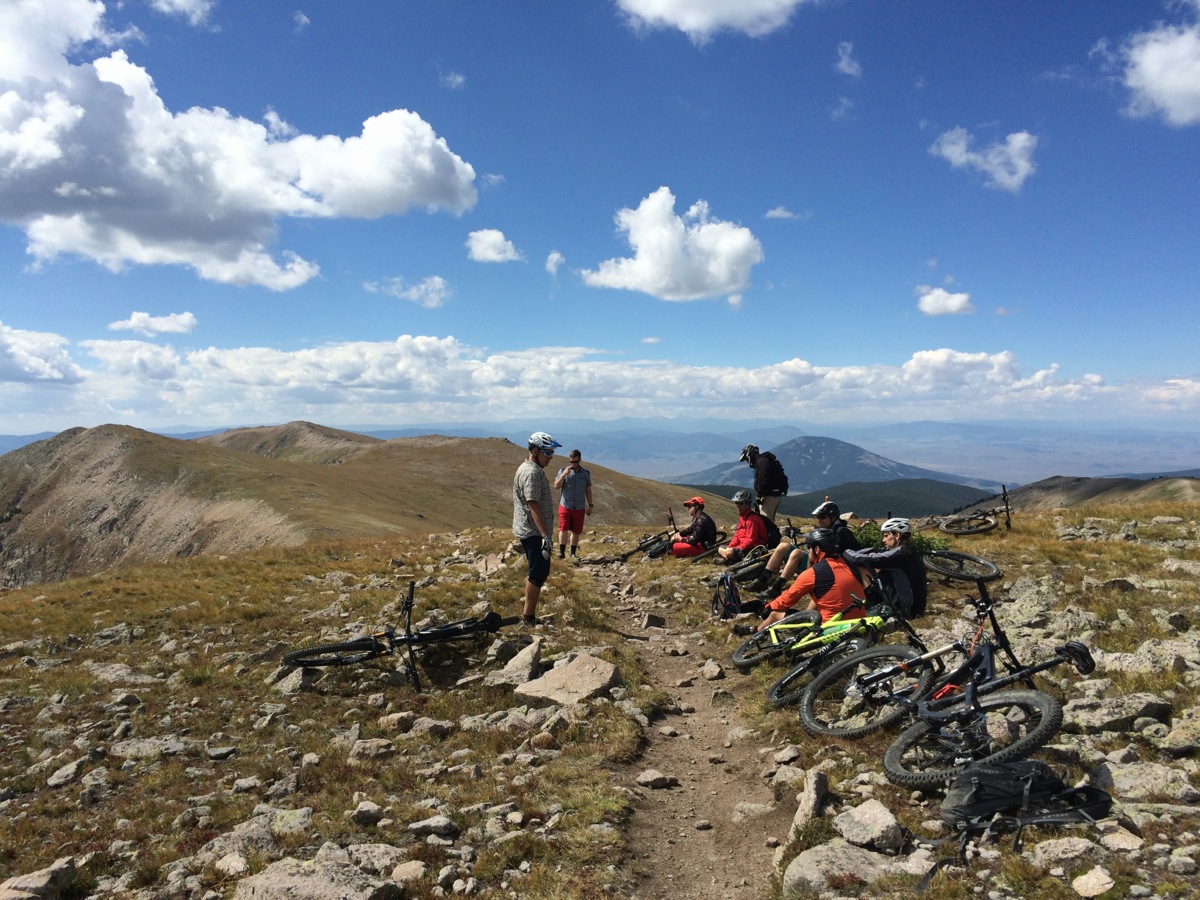 As we began descending, I felt a little thrown by the exposed trail. I’m not sure if it was a result of already being a little lightheaded due to the altitude or exertion, or the fact that I’m not so great with heights, but I suddenly felt like I was going to fall right off the mountain! I slowed a little to compose myself, taking my time to pick through the rocks and focus on the trail. Once we got back below treeline, I was ready to go fast again.

There were some sketchy, rocky sections on the way down to the valley, but then the trail smoothed out and became super flowy for much of the rest of the descent. Just before arriving back at the vehicles, there was another substantial climb–nothing compared to what we had done to get to the top of the mountain, but after miles and miles of descending, it was pretty brutal. I walked most of it, too tired to even attempt to grind my way up. Bu, the trail ended on another downhill–a fun set of switchbacks that popped us out right back where we began, in the grove of aspen.

Beer and grub at Moonlight Pizza in Salida tasted so good after all that riding! And then it was time for me to head back east. It’s been real, Colorado. ‘Til next time.

Gear
These MTB Deals are Fire, including 40% off Patagonia Dirt...
Gear
The Maxxis Minion DHF Tire is Still the One to...
Progression
Sizing Up or Down Plus Handlebar Widths and Crankarm Lengths:...
Gear
Never Underestimate the Power of a Good Zip-tie
Subscribe
Login
Please login to comment
4 Comments
Most Voted
Newest Oldest
Inline Feedbacks
View all comments

Two great rides, so glad you were able to come out Helena!

What Helena fails to mention is how she was dropping most of us on the climbs up the mountain… despite her east coast lungs. So modest 🙂

Great series of reads and photographs. Made my second trip from Florida to Oregon this summer. Tried to ride in every state along the way but I set way to tough a schedule and my body gave out at Vernal, Utah. I skipped Wyoming and Montana, but spent the next 4 months riding several trails in Oregon and a few in Washington. Will be heading south to the San Diego area for a month soon and then back to Florida Your story got me looking for trails on my route.

Thanks for the series sharing your mtb trip. I love these articles about people’s adventures. I guess I’m going to have to add Canyon Creek to my wishlist. It looks brutally wonderful. =)