The first few shops we visited in Steamboat Springs recommended that we begin by riding Emerald Mountain, and then go from there. After taking their advice and riding Emerald, I was left wanting. And after looking at my newly-purchased map and other informational materials, I was a bit indignant: there was no way Emerald Mountain was the best that Steamboat has to offer!

After doing some more digging, and finding a shop employee that would give us real answers to our questions, we were finally able to get the beta on a true big-mountain Steamboat ride… and it turned out to be one of my best rides all summer!

This ride is an epic shuttle beginning from Dumont Lake at the top of Rabbit Ears Pass on Highway 40. However, the one catch is that none of the shops or guiding companies in town have been able to get a permit to provide commercial shuttles to the top of the pass. So, you and your buddies will have to figure out a way to shuttle yourselves up to the top.

From the top of Rabbit Ears, the route I chose to take followed the Continental Divide Trail, also referred to as Wyoming Trail #1101 here, to the turn off toward the Fish Creek Falls trail. After a short pedal, I took another left onto the Mountain View Trail. I finished the descent using some of the trails located in and around Steamboat Ski Resort. Lastly, I picked up the paved Yampa River Bike Trail to deliver me back to my truck in the town of Steamboat.

While this is one of the more popular routes and the route I personally chose, there are a number of different options available. Instead of turning off of Fish Creek Falls onto the Mountain View Trail, you can follow Fish Creek Falls all the way down into the town of Steamboat. Reportedly, it’s a gnarly ride, and bringing a bike with a lot of suspension is a good idea!

Also, before turning off onto Fish Creek Falls, you could take a right to keep following the CDT along the divide. Reportedly, the section near Buffalo Pass is fantastic. If and when I return to Steamboat, that’s on my hit list!

Emerald Mountain? How’s Emerald mountain supposed to measure up to descending off the Continental Divide?

For me, while it was a huge bummer that Max had separated his shoulder the day before while downhilling at Steamboat Ski Resort, I was able to score a ride up to the pass with Max and his brother Jesse as they began the long drive back to Georgia.

I began my ride from Dumont Lake by pedaling along the doubletracky Continental Divide Trail, which gave way to singletrack in just a few miles.

Having just ridden a portion of the CDT along the Monarch Crest a week previously, I was amazed at how different this section of the CDT felt. While the Monarch Crest runs along the top of a relatively sharp-edged mountain ridge, high above tree line, the tops of the mountains here were quite rounded and flat, and below tree line. Despite rolling along at 10,000 feet, I found myself pedaling through rolling high alpine meadows filled with gorgeous wildflowers, passing by pristine lakes resting at the top of the continent. 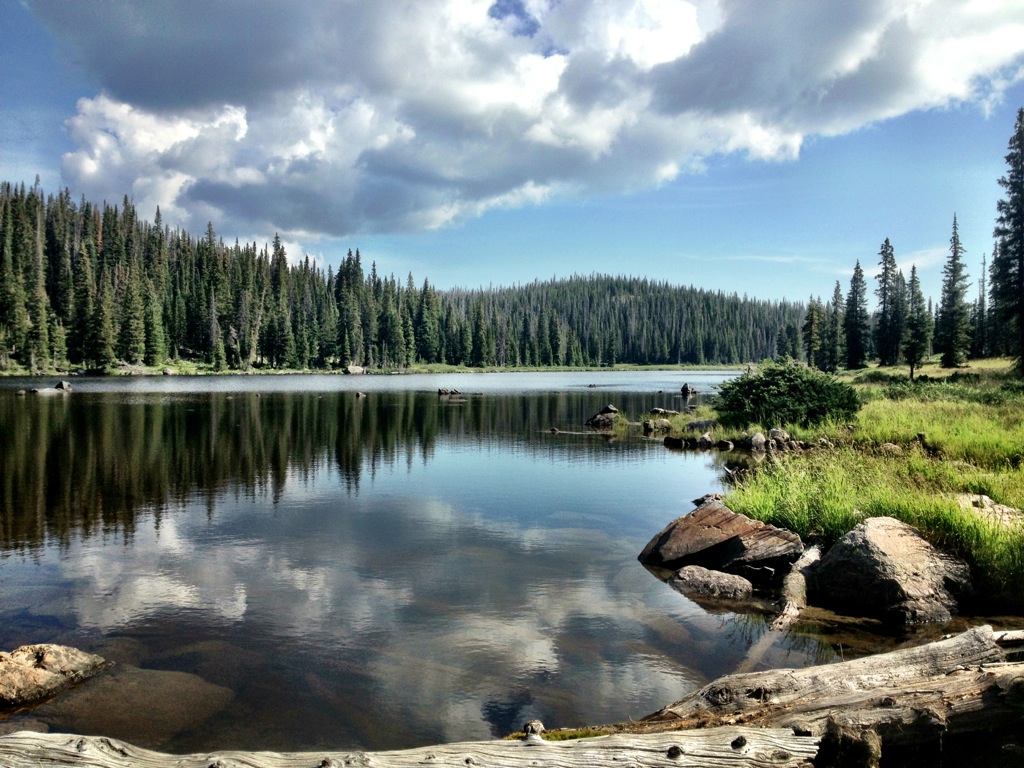 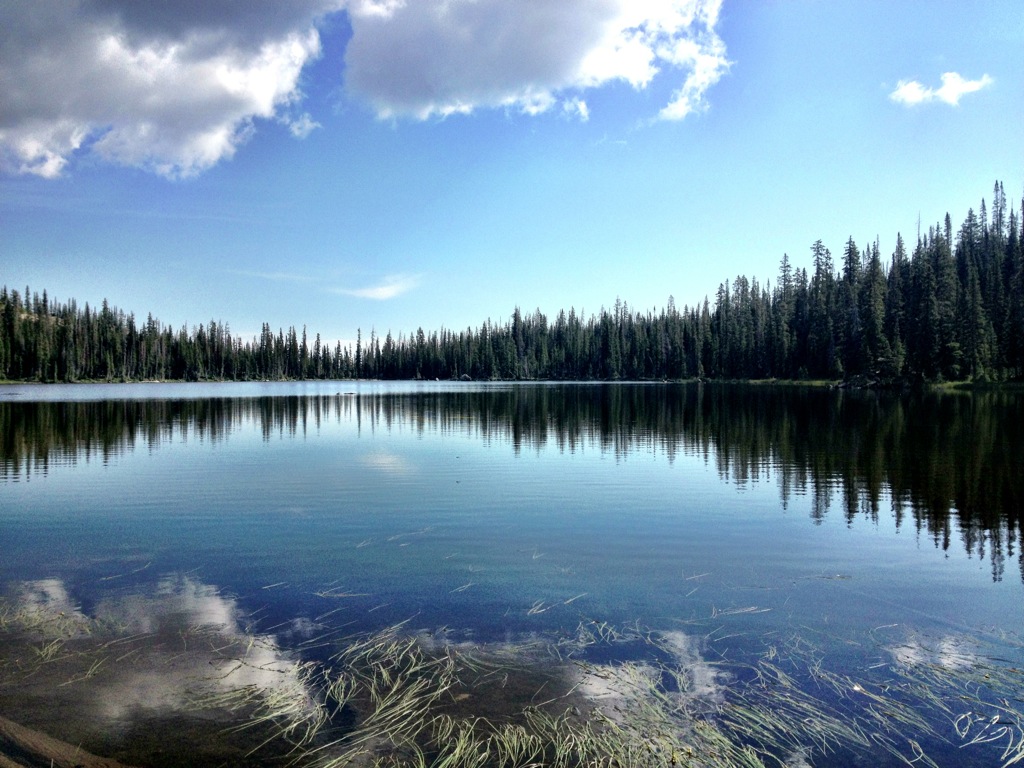 While the trail was relatively rolling through this section, it was by no means easy. The 10,000-foot elevation wreaking havoc with my lungs, punchy climbs, and interspersed technical sections definitely kept me on my toes. 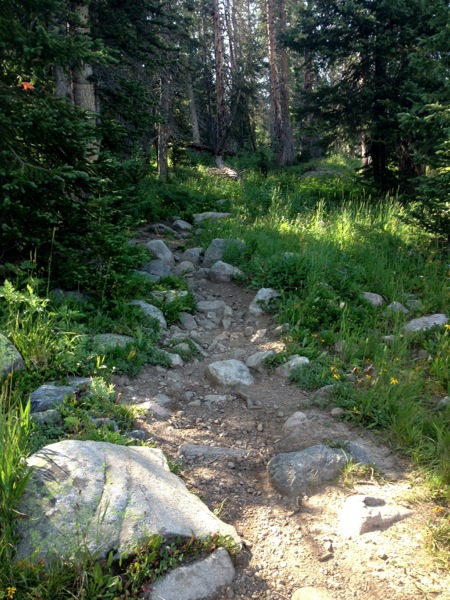 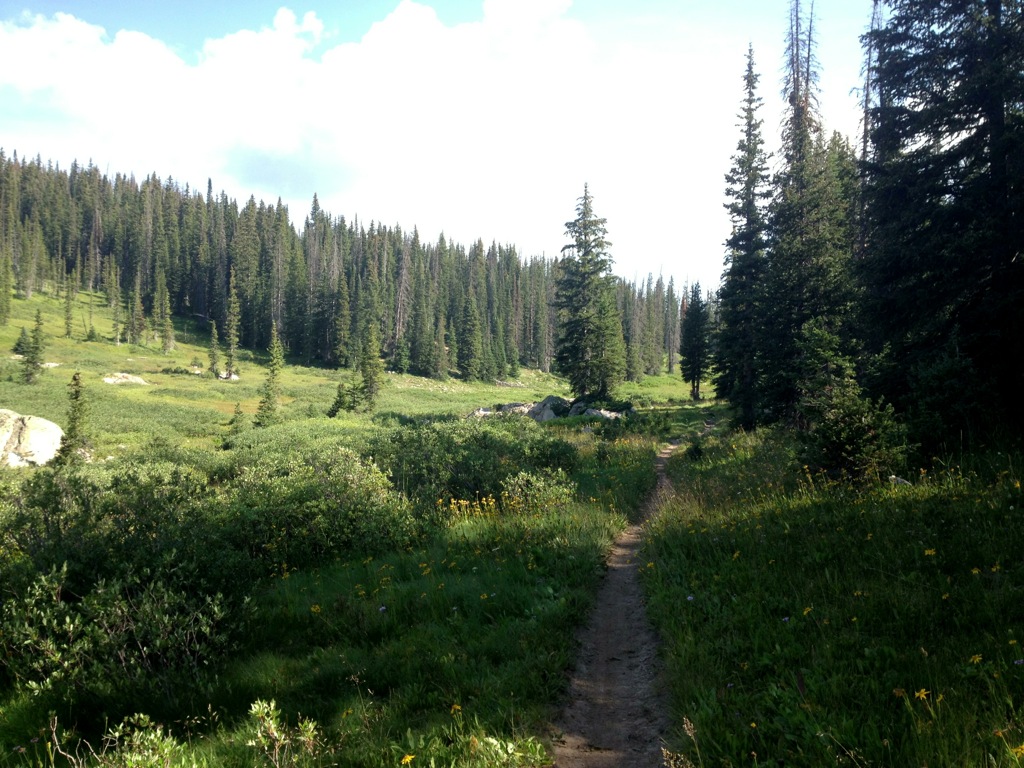 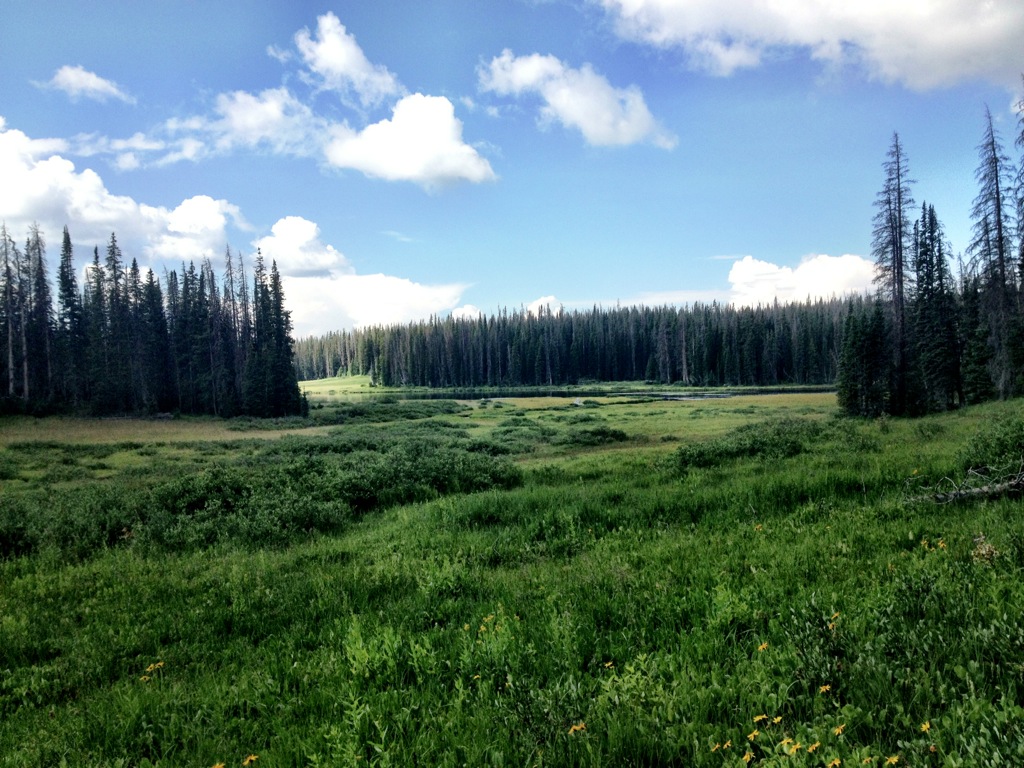 Eventually, the trail turned into a stand of pines and gained a bit of elevation as I approached the turn off toward Fish Creek Falls, and eventually, the Mountain View trail. 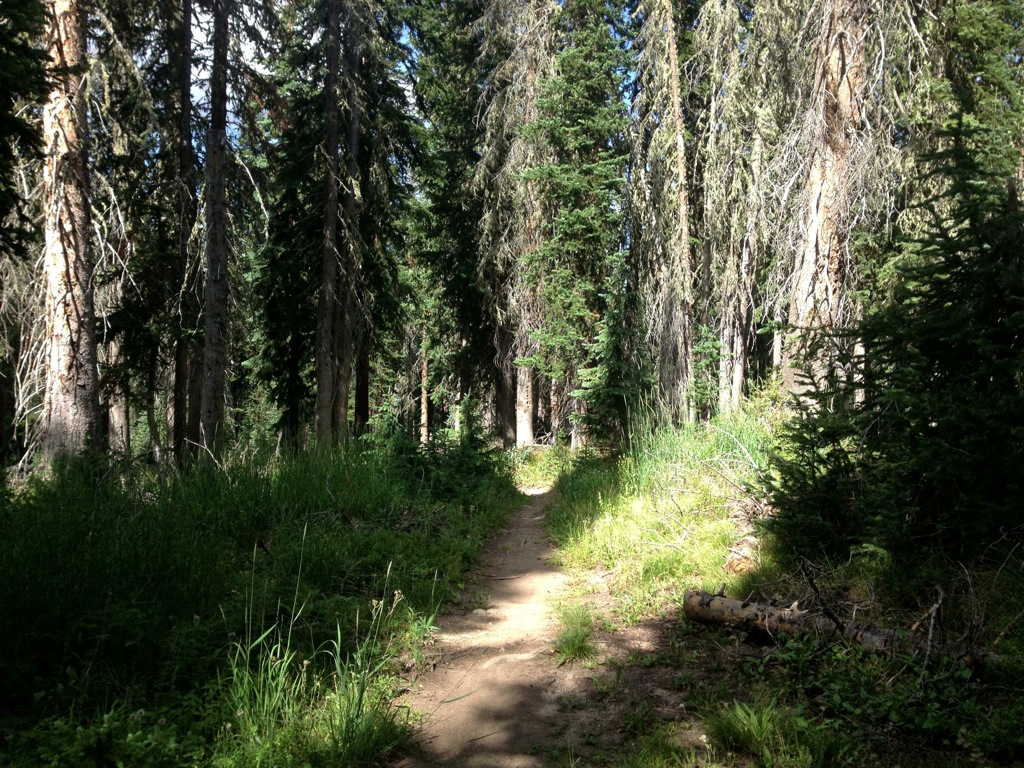 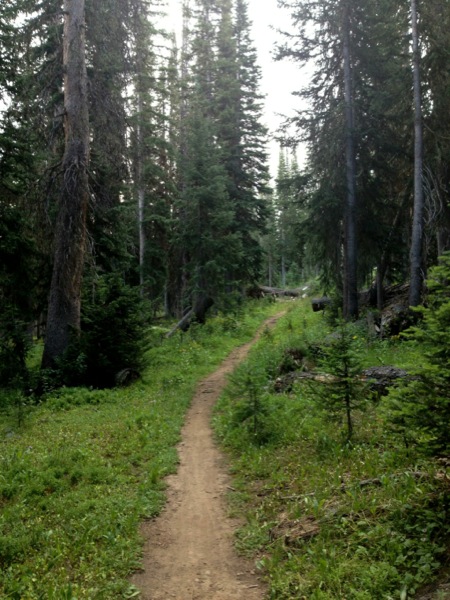 After climbing a bit through the pines on the Mountain View Trail, the forest opened up, proving that this trail truly lives up to its name! 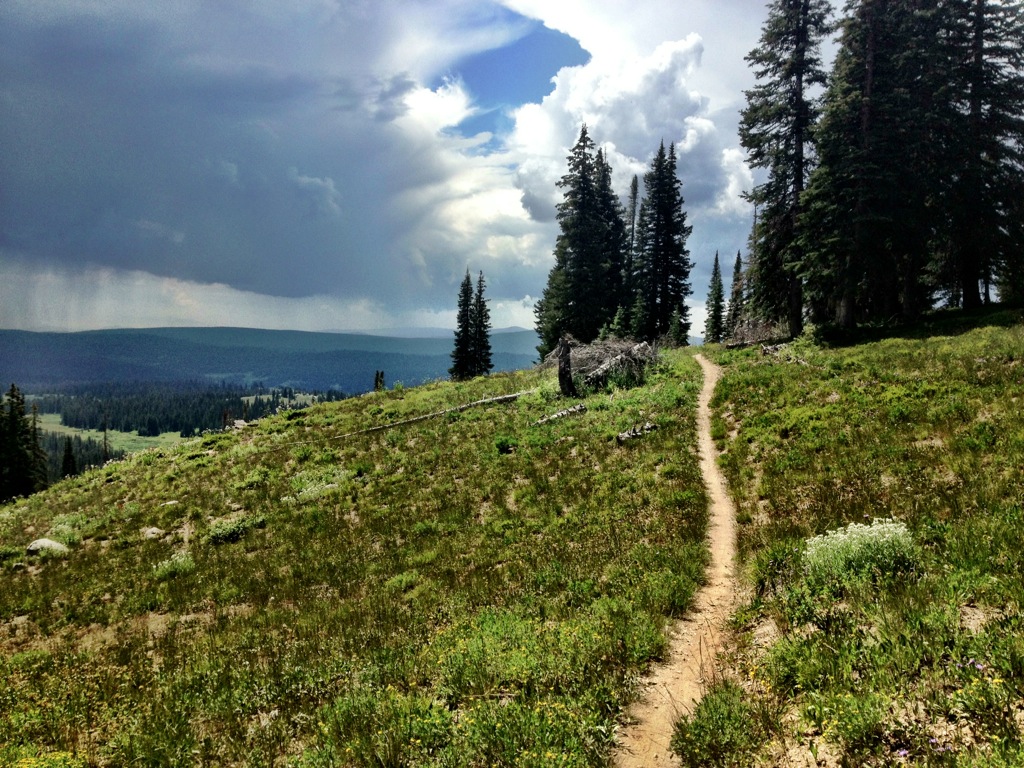 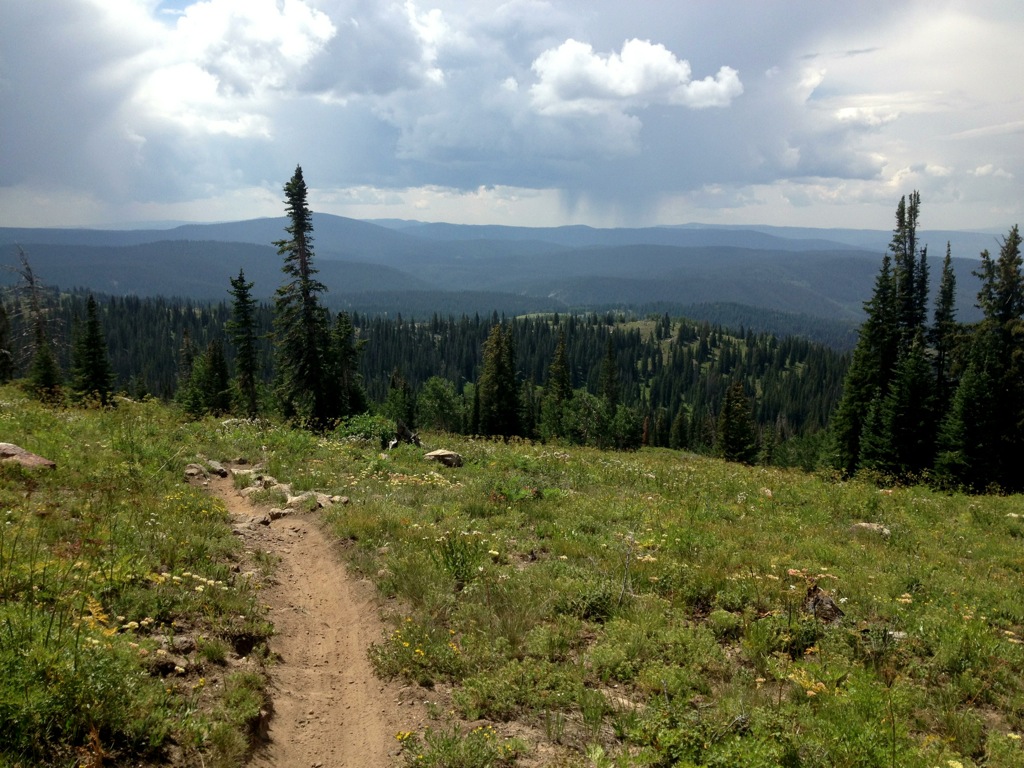 While the ride had been mostly rolling so far with short climbs and descents, when I reached the top of Mount Werner and the Steamboat Ski Resort boundary, I realized that I was about to lose a lot of elevation very quickly! 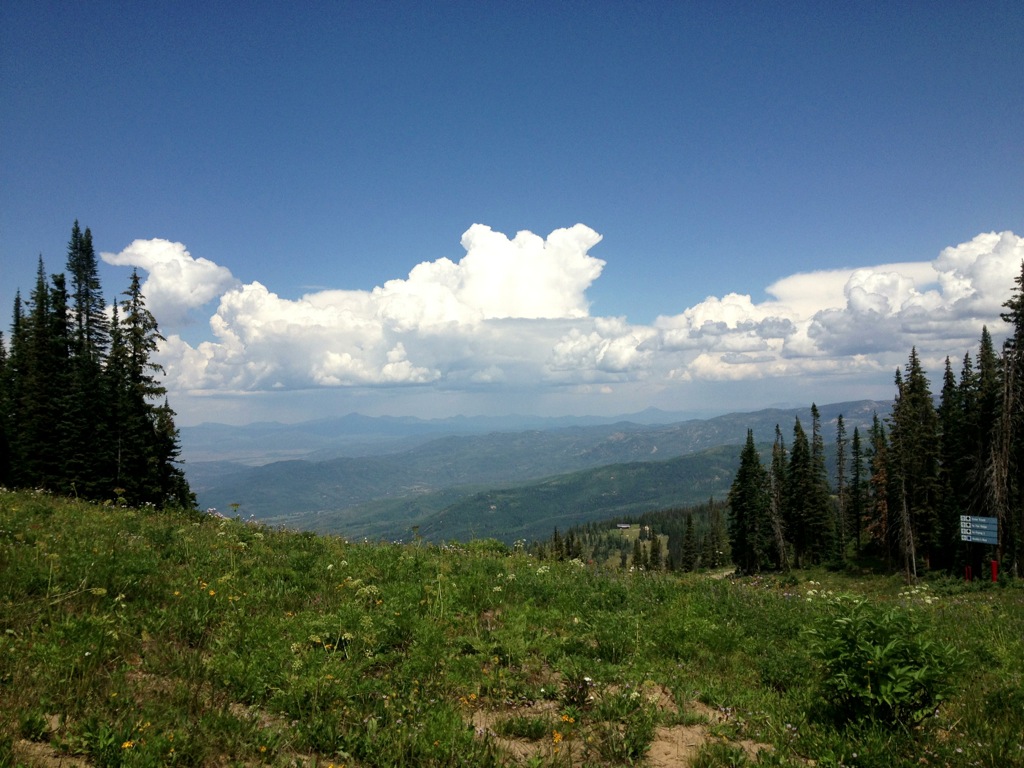 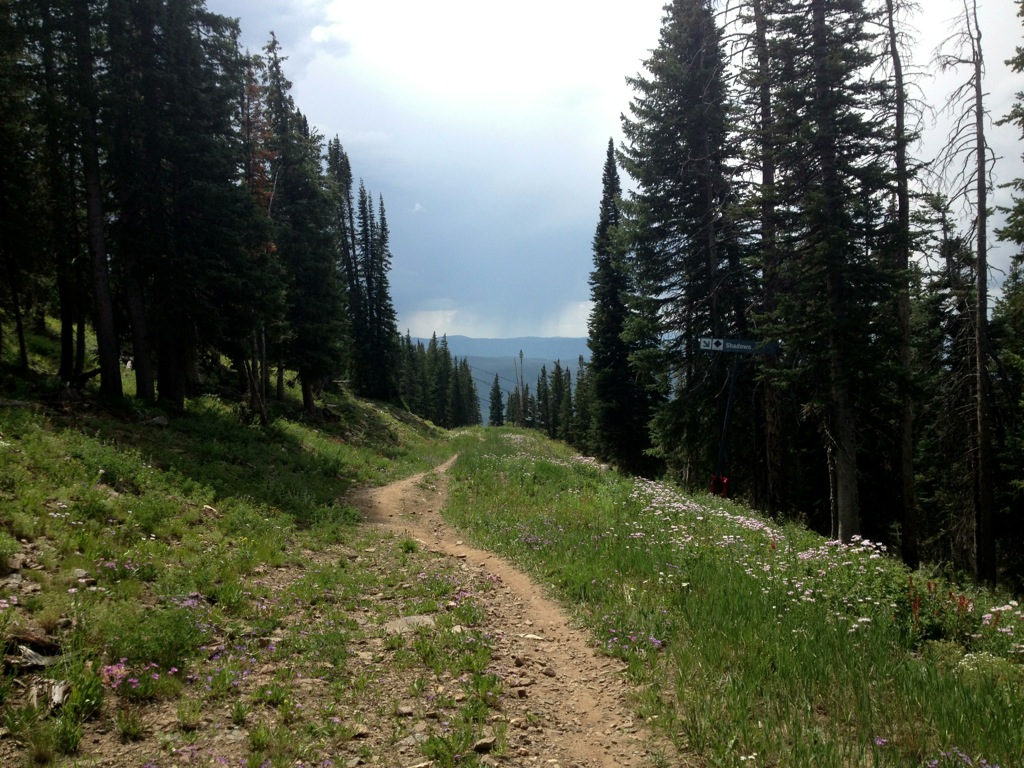 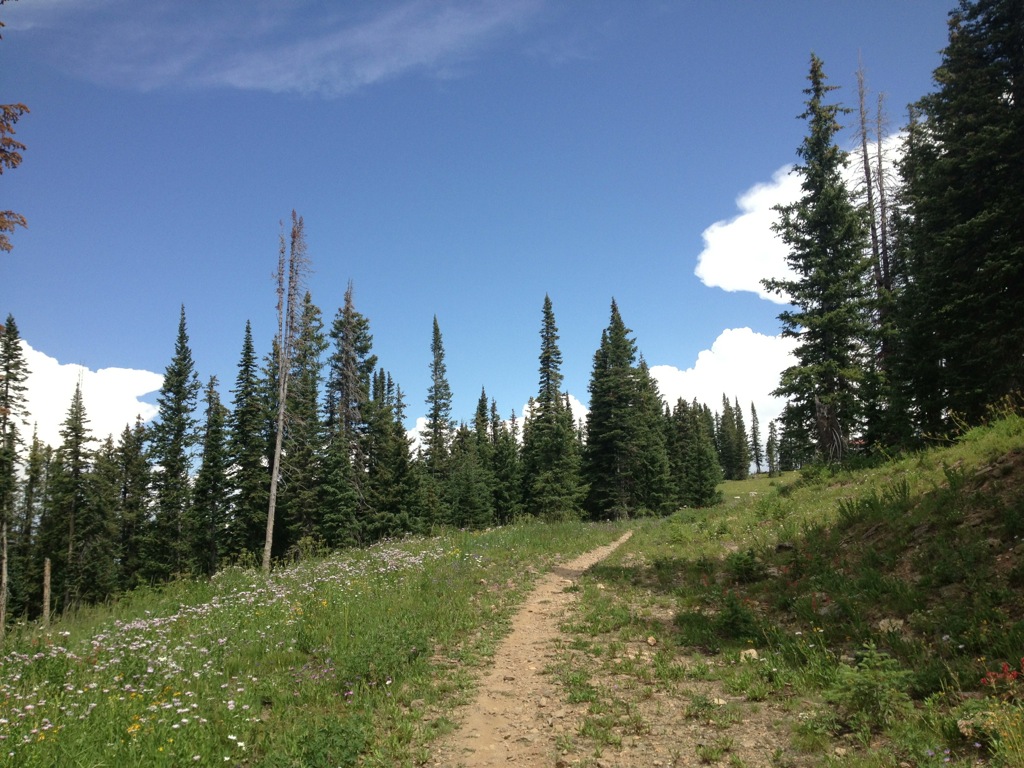 When descending through the resort, you need to be careful: according to the signs, only certain trails are legal without a lift ticket. According to the signage at the time, essentially all of the downhill-specific trails require a lift ticket to ride down… even if you don’t ride the lift up. While that seems a little absurd, there are plenty of great multi-directional, multi-use trails that descend down through the resort as well… some of them with plenty of rocks and gnar to keep things interesting! 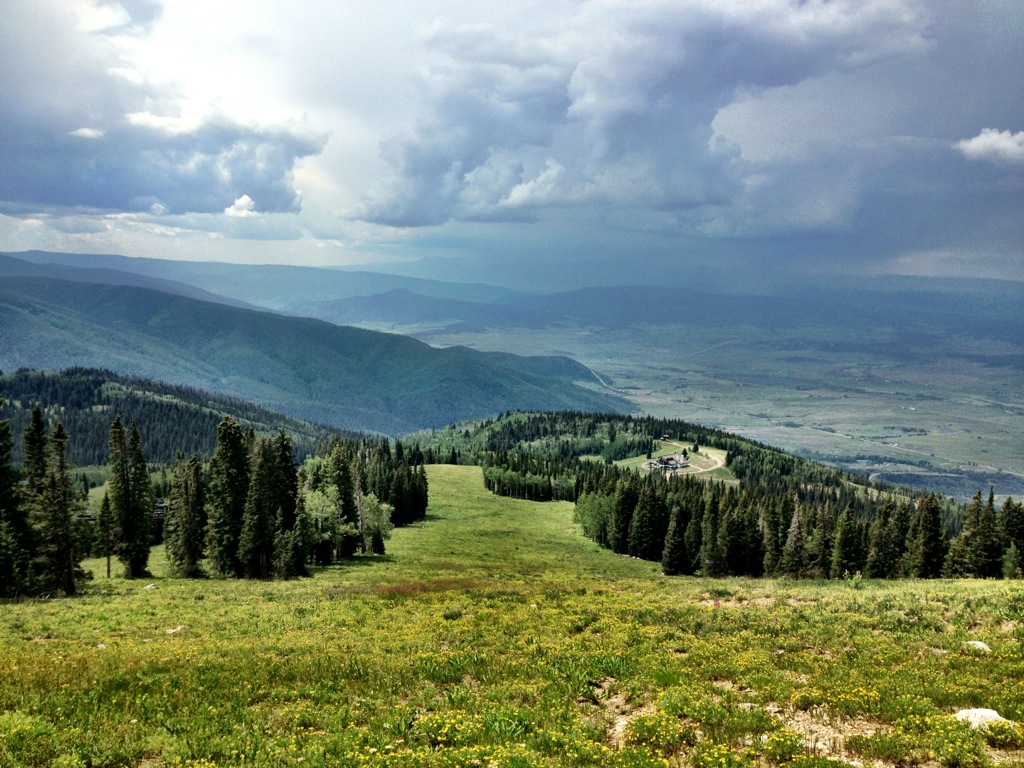 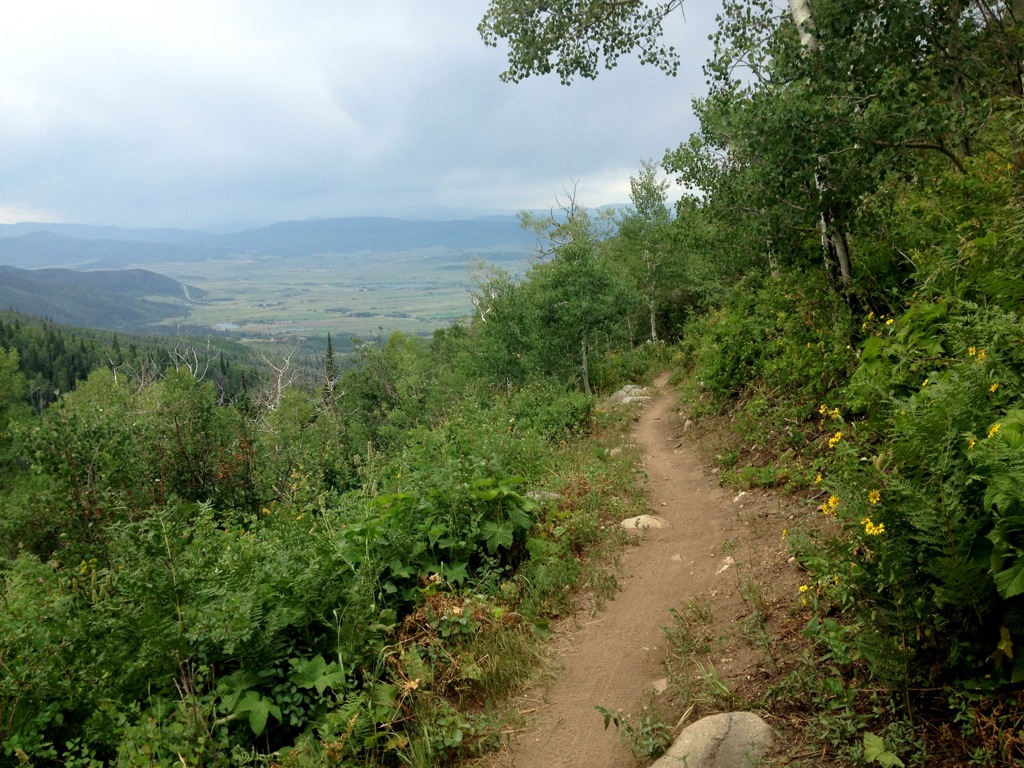 After an epic 30+-mile ride at 10,000 feet of elevation with well over 2,000 feet of uphill pedaling (despite the shuttle), I stopped at Subway for a well-deserved footlong!

Great pics–they really show the feel of that country. I love that area, although it really put the hurt on me once. Here’s my quick story of woe and my “inadvertent shuttle.”

My plan was to start at the summit of Rabbit Ears Pass and follow the same route as you for the first part. But rather than turn down Fish Creek Falls (I was riding alone–no shuttle), I would continue north on the Wyoming Trail to the summit of Buffalo Pass and return via a different trail.

On the return leg, I came upon a fork which was not on my map. I chose incorrectly and ended up hopelessly lost. The temps were in the low 50s and there was a steady mist. I had a map and compass, but the dense fog prevented me from locating any landmarks, so I was riding blind . . . for hours . . . and there was nobody else out in those woods.

After quite some time, I rounded a corner and saw a patch of blue sky, and just beneath it I could see the summit of Mt Werner (Steamboat Ski Area’s main mountain). At that point, I finally knew where I was, but had no idea how to get to where I wanted to be. I had long since run out of food and water, darkness was approaching, and I was quite seriously bonked after about 40 miles of riding above 10K feet.

So I simply pointed my bike downhill on one of the ski area trails, rode into town, and found a cab which could carry my bike and me back up to the top of Rabbit Ears Pass. $50 later, I was back at my car and dreading the 3hr drive back to Cheyenne, WY.

Wow, that sounds like an epic day!! Getting lost in the big mountains is never a good feeling… but man, did you cover a lot of ground!

I just found another interesting fact you may need to know if you ride Emerald Mountain in the spring. If you check the map, one spur off of The Blair Witch Trail is called Angry Grouse which I never thought much about before. Yesterday, my friend and I were riding up the end of Larry’s trail and decided to take a break. As we neared the trail sign, a Grouse began to approach us. Evidentally, it had a nest near by and began following us, beating its chest, and occasionally darted even closer when we turned our backs. We rode up a few hundred feet more and it still followed us. We eventually gave up on the idea and kept riding only to have another one run out into the trail on a downhill section. So if you encouter a nesting grouse, they will be angry and they will peck at your ankles!