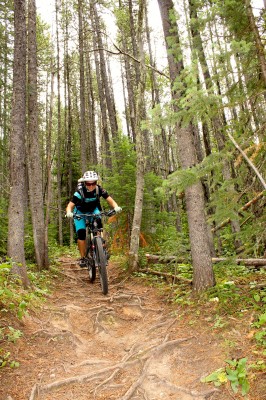 While the nearby towns of Banff and Lake Louise offer very respectable mountain biking considering that they’re inside a national park, the town of Canmore needs no such qualifications. Canmore is, quite simply, a true mountain biking destination in the very sense of the word. According to Jacob Johnson, an engineer for the town of Canmore, Canmore boasts 500km (310 miles) of bike-legal trails within a 45-minute drive from the town of Canmore. While this number does include doubletrack as well as singletrack, all of these 500 kilometers are non-motorized trails.

Yesterday I wrote about the heart of Canmore, the Canmore Nordic Centre, and while this trail system is vital to Canmore’s status as a mountain bike destination, it is by no means the entire story. In addition to the Nordic Centre, Canmore boasts two other networks of singletrack that are rideable from town: the Montane Traverse and the Highline Trail. While I didn’t get to sample either of these rides personally, according to my sources they provide great after work mountain biking, while also offering singletrack connections to backcountry-style trails.

While I can’t stress enough how good the riding is literally out the back door in Canmore, the true backcountry biking beauty results from Canmore’s access to Kananaskis Country. Referred to as K-Country for short, the Kananaskis region lies south and a little east of Canmore, and features the small tourist town of Kananaskis. However, much of the riding in that region is easily accessed by car from the town of Canmore, with a plethora of ways to access the network. While it could take you years to fully explore all of the trails in K-Country, I met up with some rad local shredders who showed me one of the many fantastic rides.

My main guide was Tricia Wilson from Trail Sports at the Nordic Centre, but since it was a Saturday her husband Kevin and their friends Mike and Jen joined us, making for a real singletrack-slaying posse! We hopped in the pickup and drove on out into K-Country, parking at the base of the Prairie View trail.

Our route was simple enough: climb from the lake up the Prairie View trail to the top of the ridge, then bomb back down via the singletrack portion of Prairie View, turning left onto Jewell Pass to finish our descent. However, once we began grinding our way up the mountain, I realized that the execution would be much more difficult than it sounded at first: the doubletrack climb rocketed straight up into the sky!

As the climb got steeper and steeper, I eventually resorted to hike-a-biking, but when I reached a break in the trees with a breath-taking vista, I just had to stop and snap some photos! We still weren’t at the top yet, and the views from the very top proved to be even better. 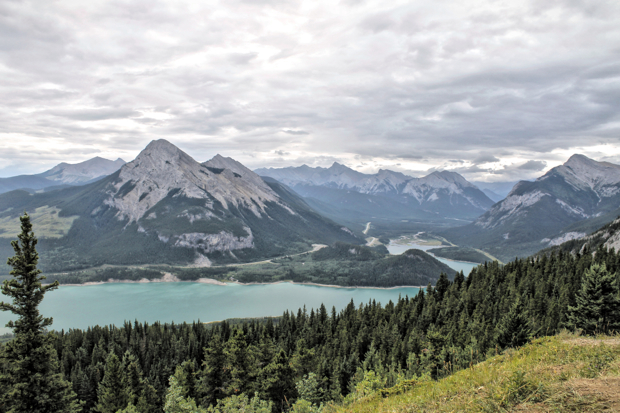 As I watched the other members of our posse finish the doubletrack climb, I noticed something: every single one of them had at least one can of bear spray easily accessible. This entire region is flush with dangerous wildlife, including grizzly bears, black bears, moose, wolves, and mountain lions, as well as other less-threatening big game like elk, bighorn sheep, and mule deer. Just the day before, Charlie and I had spotted a little black bear cub munching on some berries in a meadow at the Nordic Centre. I snapped a few shots, but we didn’t hang around too long in case mom was nearby. 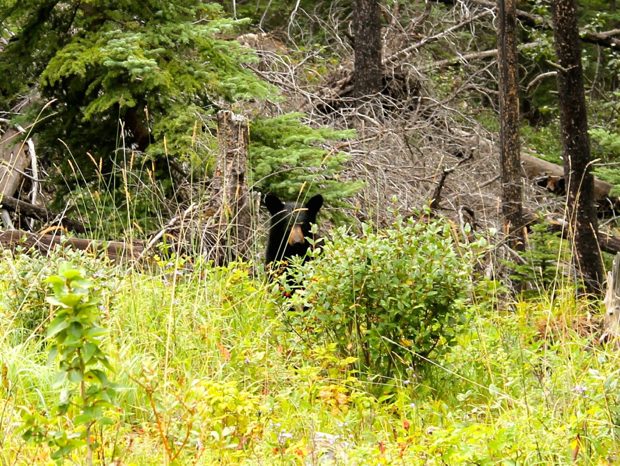 While I really wanted to spot a grizzly bear on my trip as I’d never seen one before, I decided that it’d probably be smart to stick close to the bear-savvy members of the group with the cans of spray. And while this story would be way more interesting if we eventually had a run-in with a grizzly bear, sadly I struck out on this trip. In addition to standard beasts such as mule deer and the black bear cub, I also spotted elk and bighorn sheep on this trip into the Alberta wilds… but still no luck on a griz.

After our crew reassembled, we continued onto the singletrack portion of the climb, which was largely hike-a-bike for another half-mile or so to the summit of the mountain. This section even included some scrambling, and really put the “mountain” in “mountain biking.”

Finally at the summit of the mountain, we had to take a few minutes to soak in the view. While this trail is called “Prairie View,” to get a view of the Prairie you have to wait until you get to the very top of the mountain, and then turn around and look behind you. But why would you spend time looking that direction, when the mountain view of the other side of the ridge is so spectacular? Still, this ridgeline is located in a really unique spot: right on the edge of the prairie, with thousands of miles of flat terrain located to the east and the massive Rocky Mountains located to the west.

Finally, it was time to turn tires downhill! The very top portion of the trail was loose and scree-filled, but after a couple hundred yards the singletrack dove into the trees and plummeted down the mountain side.

This old school singletrack trail was skinny, rooty, and steep, with narrow holes to thread through the trees and endless webs of roots with wheel-sucking holes. As I tried desperately to hang onto Mike and Kevin’s wheels, I was thankful for the big 29er wheels on the Rocky Mountain Instinct I was borrowing, which rode right over the holes instead of getting bogged down in between the roots. 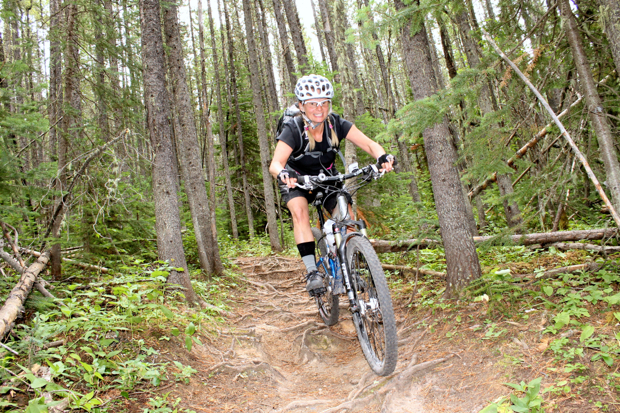 During our descent we passed the turn off to Razor’s Edge. Currently in the process of being legalized, by all accounts Razor’s Edge is the crown jewel of K-Country, with epic views, massive rock slab rolls, and big technical features. While it was tempting to hit that trail, it would have dropped us down the wrong side of the mountain, requiring a tough climb back up and over the ridge.

As we pinballed through the root webs, we eventually reached the junction with the Jewell Pass and Quaite Valley trails. If we had dropped down Razor’s Edge, we would have had to pedal back up Quaite Valley to get back to the correct side of the ridge and back down to the truck. Still, if it hadn’t been the end of a long 5-day trip, crossing the ridge twice in one massive loop is a pretty popular route.

Turning left onto Jewell Pass, we continued dropping, but the nature of the trail changed abruptly. In 2013, the Canmore area endured a 200-year flood, which washed out roads, railroad tracks… and tons of singletrack trails. Local volunteers are still in the process of rebuilding trails that were destroyed in 2013, but Jewell Pass is one of the trails that has been finished. The new portion of the trail was machine cut with a quality bench, excellent grade reversals, and drainage: Jewell Pass isn’t going to wash away again! While the ride suddenly felt so different than it had up high, we whooped and hollered as we ripped through the flowy sections, airing off of boulders and lips and pinning through the occasional rock garden. 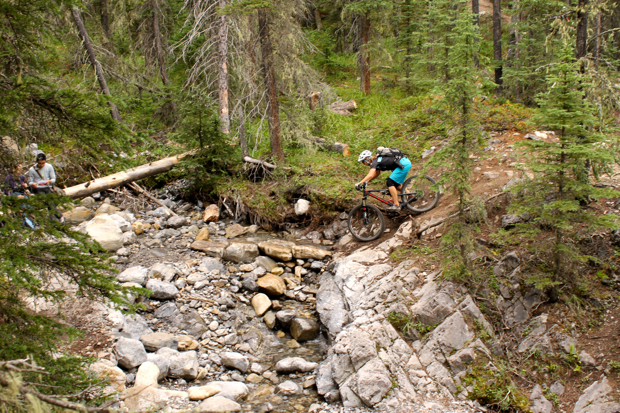 All too soon we were back down to the lake, finishing the loop with a short gravel road pedal. While we had only ridden 10 miles, it’s pretty amazing that we had summited a mountain and shredded such a lengthy, entertaining descent in such a relatively short amount of time. Of course, there are plenty of ways to extend the ride that we did, and just across the valley Tricia pointed out several other epic rides that I would love… but those trails will have to wait for another trip

Our week in Alberta was filled with entertaining singletrack, gorgeous mountain vistas, and delicious food and beer. Distilling our entire experience down into a few short articles just can’t do this area justice. So if what you’ve read intrigues you, I encourage you to add the Canmore/K-Country/Banff region to your mountain bike bucket list and start planning your trip NOW!