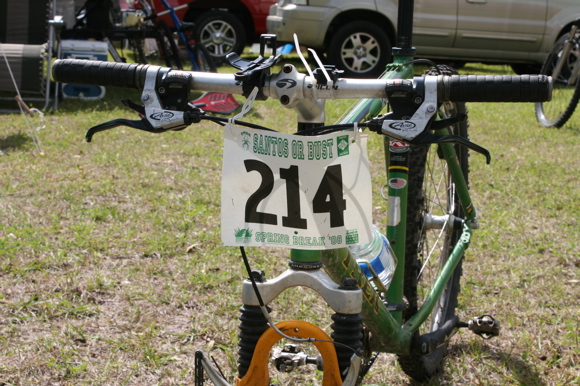 It seems like everyone is running marathons these days. Oprah did it. Diddy did it. Heck, even I did it a few years back. Today’s marathon is yesterday’s 10K and it seems like pretty much anyone can run 26.2 miles with a little training.

The cycling equivalent of a marathon, the “century,” is a 100-mile road ride that requires nearly as much training and way more time on the road. Still, I’m pretty sure if Oprah had a road bike she’d ride a century too.

I had hoped to do my first dirty century in 2009 on the trails in the Sumter National Forest outside Augusta, GA but plans for the race were scaled back to a metric century instead (100 kilometers instead of 100 miles). Sixty-two miles on a mountain bike is still a pretty serious distance and I’m looking forward to increasing my personal distance record of 42-ish miles set on the singletrack at Santos last spring. If the metric century goes well perhaps I’ll train through the summer to tackle the Fool’s Gold 100 – a real dirty century – in August.

In a follow-up post I’ll talk about my training plans for the Sumter (Metric) Dirty Century and I’ll keep you posted on my progress. Just so ya know my goal for the race is to beat Oprah’s marathon time 😉

Community
A Chain of Inspiration has Grown Mountain Biking in the...
Gear
We Tested 5 Tubeless Tire Sealants to See Which Ones...
Gear
Would You Rather Ride with No Suspension, or No Dropper...
Gear
Enduro Deals & Early July 4th Sales
Subscribe
Login
Please login to comment
8 Comments
Most Voted
Newest Oldest
Inline Feedbacks
View all comments

Actually we have got your dirty 100’s here in Alaska, a few of them. One of them being the Susitna 100 which is the frozen version that just took place on valentines day. The most popular race of the year however is the Soggy Bottom, and don’t let the name fool you, this is 109 miles of single-track and almost 11,000 of climbing. There is however a 2 or 3 person relay type race option which makes this almost sane. (I tried to post links but that doesn’t seem to work here in the comment section- google works).

I too am intrigued by these and want to participate this year. That 100 mile mark though is a pretty high one. I can do between 40 and 50 miles here just around anchorage in a day on a mixture of singletrack, ski trails & paved bike trails and do so quite regularly. However without leaving the anchorage bowl Im never climbing more than about 500’. The Resurrection Pass Tr was the longest day ride Ive tackled up here and at 38 miles of singletrack with a little over 2000’ of climbing was definitely a full days ride. The inch of rain we received that afternoon was just a bonus to help etch the ride into my memory- and I cant wait to do it again. The Soggy Bottom race yo-yo’s this trail and throws in the Devils Pass trail as a bonus, when Carlos sets the dates for this summers races Ill be sure and post them here.
I also receive emails from the Big Blue Adventure Series that has many different types of races all over the country, they are worth checking out if your interested in getting into racing.

We have one here in Pennsylvania, as well, called the Wilderness 101. It climbs more than 10,000 feet, covers 101 miles of singletrack, doubletrack, fireroads, and a tiny bit of pavement in Rothrock State Forest, and has been going on since at least the early 90’s in some form or another.

I rode my first century last June on the Allegheny Passage trail pushing a 32lb mountain bike at 15-17 MPH the whole way, and I’m doing the same ride again this summer. Granted, I don’t really encounter more than a 2% grade on the whole Allegheny Passage, but it’s a decent baseline, at least.

I’m going to try to attempt the Wilderness 101. Being a student at Penn State main campus, I ride in Rothrock all the time, so I’m used to the terrain and the trails. Regardless, it’s still a lot of mileage on a MTB… and a lot of climbing.

That sounds like good times, I am trying to find something to train for as well, my next big accomplishment. Thinking about a road century but hmm?

Dude, Trek7k, is that a bottle cage on your handlebars? Does that work pretty well?

[…] Century Training: Speaking earlier this week about dirty century rides, The Watch newspaper out of Telluride has a good article on a guy who is training for the Leadman […]

@ Sackattack, that’s the ridiculous mount for my GPS, though a water bottle holder might actually be smaller 🙂 I don’t get why GPS manufacturers have such a hard time designing reasonable handlebar mounts …

good on you. i have ridden many many road centuries as well as a few ad hoc off road rides (none organised – all solo events).

training wise century rides are surprisingly easy to train for. focus onplenty of low intensity stuff mixed up with some serious intervals or tempo rides. I run a series of training programs if you are interested? if not, enjoy and good luck!

sorry here is a link to my straining site: http://www.bicyclecenturytraining.com/