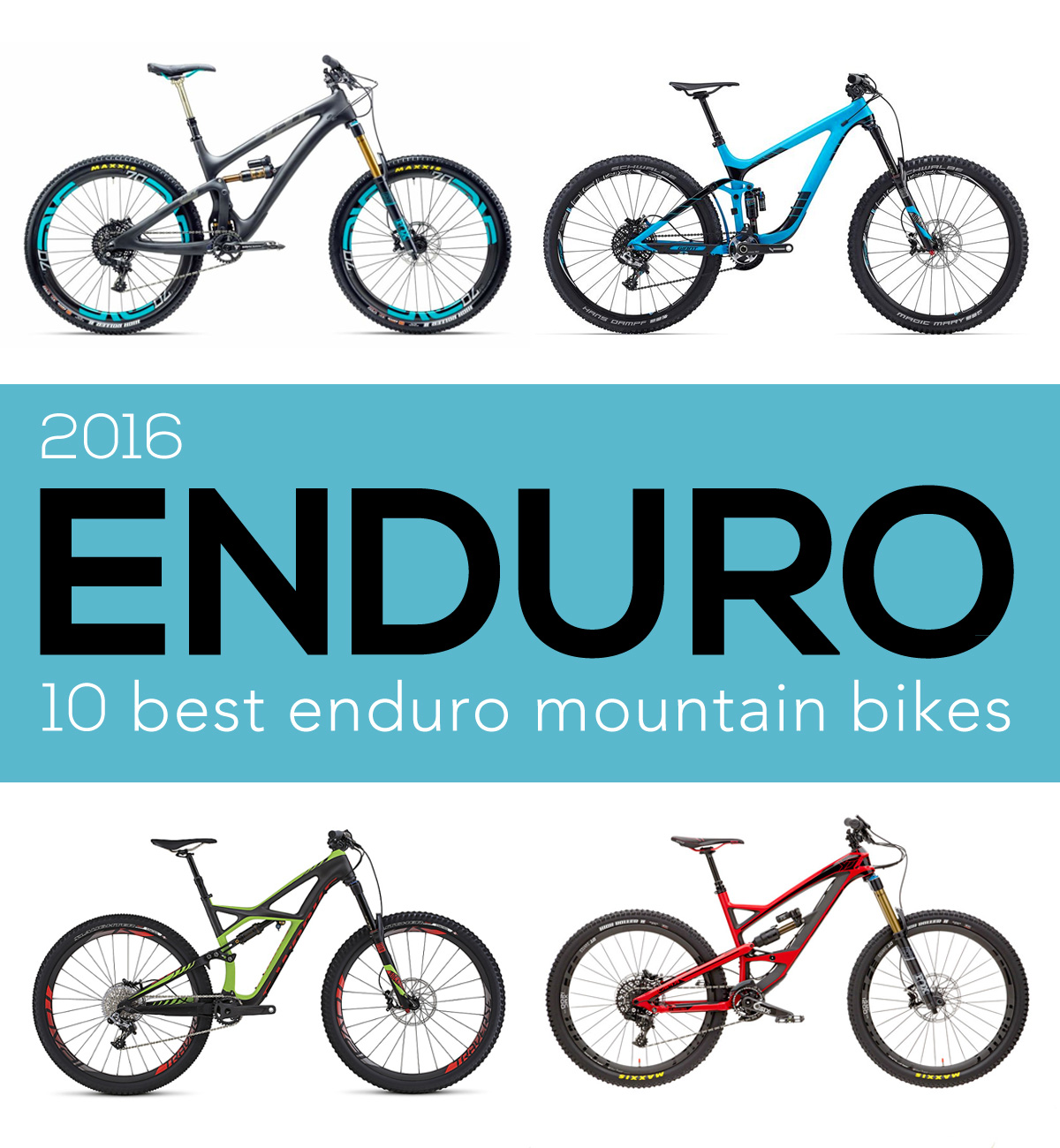 For an updated list of the best enduro mountain bikes, check out the Top 10 Best Enduro Bikes of 2019.

Exactly how you refer to this category of bikes isn’t the point. Be it “long-travel trail bikes,” “enduro bikes,” or “all-mountain bikes,” essentially, it’s all the same thing. The rigs on this list are some of the most aggressive, yet also some of the most versatile, mountain bikes on the market today.

Today’s créme de la créme of the enduro bike market are capable of climbing for hours thanks to weights around (or below) 30 pounds, suspension that can be quickly locked out, and drivetrains with massive ranges. Yet when you turn them downhill, these long-travel, uber-plush rigs are more than capable of tackling even the gnarliest downhill runs, as the top enduro racers have proven.

Simply put, these are some of the best mountain bikes in existence.

The Jekyll is the pride and joy of the Cannondale Overmountain Team, which has a truly world-class enduro race roster: Jerome Clementz, Jason Moeschler, Marco Osborne, and Mark Weir. Jerome Clementz has scored many race wins aboard the Jekyll.

The Jekyll has a carbon frame and offers up 160mm of front travel and 160mm of rear travel that can be switched down to 95mm for the climbs, thanks to a DYAD pull shock and handlebar-mounted lever. It also sports a 67-degree head tube angle, 440mm chainstays, and 27.5” wheels.

The top-tier Carbon 1 model is spec’ed with a Cannondale Lefty SuperMax Carbon 2.0 for front suspension duties. While a normal fork can be used on the Jekyll, the Lefty really sets the component spec and visual appeal of this bike apart from the crowd. Additionally, the Jekyll comes loaded with a Fox DYAD RT2 Dual Travel/Dual Geometry shock, a SRAM XX1 1×11 drivetrain, SRAM Guide RSC brakes, a RockShox Reverb Stealth dropper post, and Mavic CrossMax SL wheels.

The Jekyll is also available in more affordable aluminum models.

For more information on how the Lefty SuperMax and the Fox DYAD rear shock perform, check out my review of the Jekyll’s smaller brother, the Trigger.

The Canyon Factory Enduro Team races aboard this beaut’ of a bike, with Fabien Barrel having notched numerous wins on the Strive when he was on the team. While Canyon still has not arrived in the US, they’re coming soon.

Canyon is known for selling high-quality mountain bikes at an affordable price, directly to consumers, but with a $3,312 price tag for the carbon frameset and a $4,085 price tag for the most affordable fully-built carbon bike, it seems like going the frameset route would be a poor purchasing decision.

Regardless, the Strive comes with a carbon fiber frame, 170mm of front travel, 163/135mm of rear travel (adjustable, thanks to Shapeshifter technology), a 66-67.5-degree headtube angle (also adjustable with the Shapeshifter handlebar lever), 423mm chainstays, and 27.5″ wheels.

The Strive is also available in more affordable aluminum models.

The Giant Reign Advanced is the enduro bike of choice for the Giant Factory Off-Road Team, with Yoann Barelli, Josh Carlson, and Marcelo Gutierrez notching wins aboard this renowned rig.

The Reign is also available in more affordable aluminum models.

For more information on the Reign, be sure to read Aaron’s review of the Advanced 27.5 1 model.

The Ibis Mojo HD3 is the latest rendition in a long line of Mojos, and a favorite of the Ibis Cycles Enduro Race Team, including Anne Caro Chausson. Anita Gehrig just recently scored a win at the 2016 Trans-Provence aboard the HD3.

As noted above, the Mojo HD3 can be built with almost any parts spec that you desire, which greatly impacts the price. As such, this bike can easily be turned into a world-class enduro machine!

For more information on the Ibis Mojo HD3, be sure to read Michael Paul’s review, here.

The Tracer 275C offers a carbon frame with adjustable travel (160mm or 140mm), thanks to two different shock bolting positions. This adjustment in shock mounting also effectively changes the geometry, steepening the standard 66.5-degree head tube angle. Rounding out the specs are 432mm chainstays and 27.5” wheels.

For more information on the Tracer 275C, be sure to read my review of the Pro build, here.

The Tracer 275 is also available in more affordable aluminum models.

With a name that alludes to excessive amounts of speed, the Mach 6 offers 155mm of rear suspension travel in its carbon frame, and 160mm of travel up front. A 66-degree head tube angle and 430.5mm chainstays round out the standard specs. In addition to a clean design and beautiful engineering, Pivot is well-known for their support for smaller riders; the Mach 6 is available in sizes XS to XL.

The top-tier build kit features a Fox 36 Factory fork, Fox Float X rear shock, as well as a Shimano XTR Di2 2×11 drivetrain. The Mach 6 frame offers a compartment in the down tube for housing the Di2 battery securely, and conveniently out of sight. Other key parts include XTR M9020 Trail brakes, a KS Lev Integra seatpost, and DT Swiss XMC 1200 carbon wheels.

For more information on the Mach 6, be sure to check out Michael’s review of the XX1 build.

The Mach 6 is also available in more affordable aluminum models.

Santa Cruz’s pro enduro team now races aboard the Bronson and the Hightower, with many wins to their name aboard the Bronson. In essence, all three of these models are great enduro bikes, but we think the Nomad is more than deserving of some love on this list.

The full-carbon Nomad offers 165mm of rear travel and is compatible with 160mm-180mm forks, although all of the stock offerings are 160s. While the Nomad is only available in carbon, there are two different levels of carbon offered: the top-tier CC, and the more affordable C. This 27.5”-wheeled bike offers a 65-degree head tube angle (with the stock 160mm fork), and 433mm-long chainstays.

For more information on the Nomad, be sure to read Corey’s review, here.

Specialized’s enduro team includes world-renowned riders Jared Graves, Troy Brosnan, Hannah Barnes, and Curtis Keene. With a bike model named “Enduro,” you can guess which bike they choose–and they have the race wins to prove its worth!

The Enduro is also available in more affordable aluminum models.

The Yeti SB6c is the choice of sponsored Yeti enduro racers Richie Rude, Cody Kelley, and Chris Heath. Jared Graves scored several wins aboard the SB6c when he was on the Yeti team, as well as Richie Rude, who won the 2015 EWS World Championships.

The full-carbon SB6c frame offers 152mm of rear travel and is normally paired with 160mm of front travel. It sports a 65.5-degree headtube angle, 442mm chainstays, and 27.5” wheels. The standard version of this bike is the SB6c, but Yeti has just released a more affordable model of frame, dubbed the SB6 Enduro. The SB6 Enduro is also a carbon frame, but with a cheaper (and heavier) carbon layup, starting at $4,699 for a complete bike. This distinction is similar to that of the C and CC carbon in the Santa Cruz Nomad.

For more information on the Yeti SB6c, be sure to read my review, here.

The Capra is also available in more affordable aluminum models.

Your Turn: Didn’t spot your favorite enduro rig on this list? Let us know in the comments section below!